CARBONDALE, Pa. — About once a month, Dave Misiura and his three partners at the Lox Hair Wax Co. meet near Richmondale at a place they call Asgard, the mythological home of the Norse god Odin, to cook a batch of Battle Wax.

The all-natural, handmade hair and beard pomade is the 6-month-old company's only product. Still, the small tins emblazoned with the company's logo — featuring a bearded, well-groomed skull and a Viking ax — stand out at the barber shops where they're sold.

Misiura and his partners, all military veterans, find the Viking imagery appropriate for their hair-care product, which they're marketing for the warrior class.

"There are a ton of products for every kind of way of life, but mainly it's always the West Coast, the surfer dude, the hipster," said Misiura, company owner and founder. "We're really marketing towards ... the policeman, the firefighter, the EMT, the corrections officer, basically any kind of first responder out there."

As a corrections officer and Air Force reservist, Misiura knows this community well. They may have a tough mentality, he said, but they also want to look good.

"You are limited by how many haircuts you can actually have," said partner and fellow corrections officer Jeff Stauffer, who said these types of jobs often require a "paramilitary-style" haircut. "The Battlewax holds (hair) in place. You can look stylish and still have short hair. ... It allows people to look the best they possibly can given the circumstances." 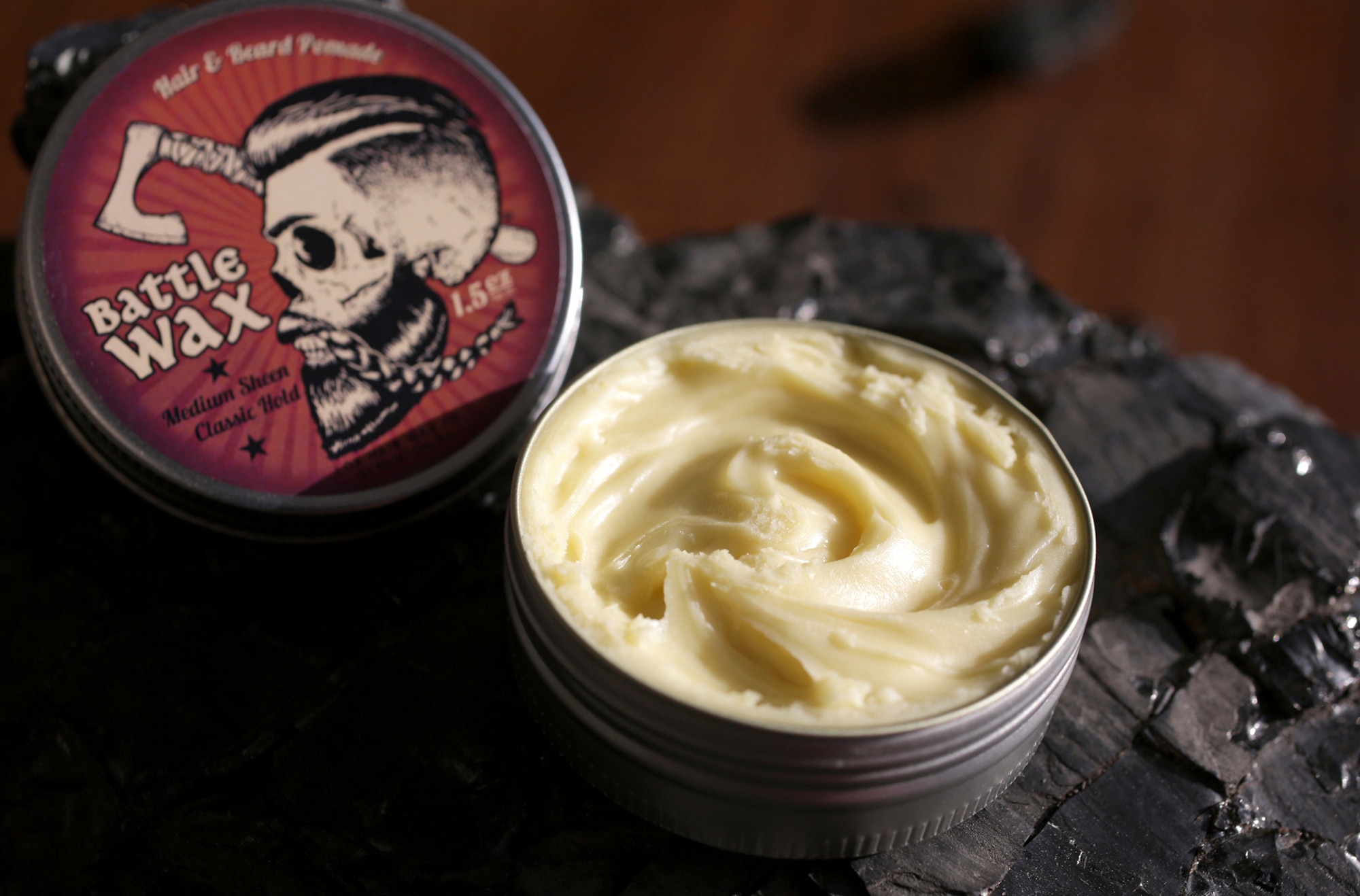 After much trial and error he had a product he was proud to share with Stauffer and fellow corrections officer Ryan Staback, who, along with Ryan's brother, Nick Staback, joined the upstart business as partners. Lox Hair Wax Co. officially launched in March.

"We're really grateful and thankful to be here in America where we can do that," said Misiura. "Entrepreneurship ... flourishes here in America. ... It's taking a leap of faith right now and just doing it."

That entails filling and shipping orders, which have increased over the past few months, and, of course, making the wax.

"These are made by hand in small batches," said Misiura. "When we meet we could be cooking for nine or ten hours and we'll maybe get 100 tins. There's a lot of time that goes into making just a little bit, but we enjoy doing it."

For Nick Staback, who lost both of his legs above the knee while fighting in Afghanistan, working with his friends and fellow veterans at Lox has been a nostalgic and rewarding experience.

"Doing this product and getting to hand out with other veterans, you kind of feel that military brotherhood again," he said.

His brother and Stauffer agreed. As corrections officers there is no finished product at the end of the day, but as a pomade cooks there is, and they said that's rewarding.

Battle Wax is currently sold at 10 locations, including Anthracite Barbershop in Carbondale, Guy's Barber Shop in Scranton and Jessup, and On&On Marketplace in Scranton.

It's also sold at The Barber Shop & Co. in Dickson City, where owner Larry Ham said recent trends of hair that's long on the top and short on the sides has bolstered the market for pomades and waxes.

"People have come in looking for (Battle Wax)," said Ham. "They have a great design and they're marketing it well."

Still, the men who run Lox Hair Wax Co. aren't complacent. They plan on releasing two new beard oils and a second hair and beard pomade before the end of the year. All products will be 100 percent natural.

"There's lots of room to grow," said Misiura. "Five years down the line our ultimate goal ... is to have a brick and mortar location where this is what we do and this is all we do."

In the meantime, customers can purchase Battle Wax for $13.99 a tin online at loxpomade.com. The site also includes a list of vendors carrying the product, and additional information about the Lox Hair Wax Co.

Information from: The Times-Tribune, http://thetimes-tribune.com/