ANNA, Texas — In the Army, Richard Ress survived duty in some of the most dangerous parts of Afghanistan, but on a July day in 2009, he seemed ready for his life to end in the back of a Texas police car facing his third drunken-driving arrest in less than a year.

According to the arrest report, Ress asked the officer "to shoot him and get it over with." He was struggling with flashbacks and nightmares associated with post-traumatic stress disorder, which went untreated during four months in jail. A few years later, in 2015, he got a fourth DWI.

"I knew I couldn't continue like this because I was going to die," he said.

That's when Ress was flagged for a program that aims to divert certain veterans facing criminal charges into treatment programs instead of sending them through the criminal court system. And rather than requiring veterans to travel to court appearances, this court travels to reach them in five counties near Dallas.

Judge John Roach Jr. said the court is a first of its kind, and he hopes it will be replicated in other rural areas without public transportation, where getting to hearings can be a challenge. 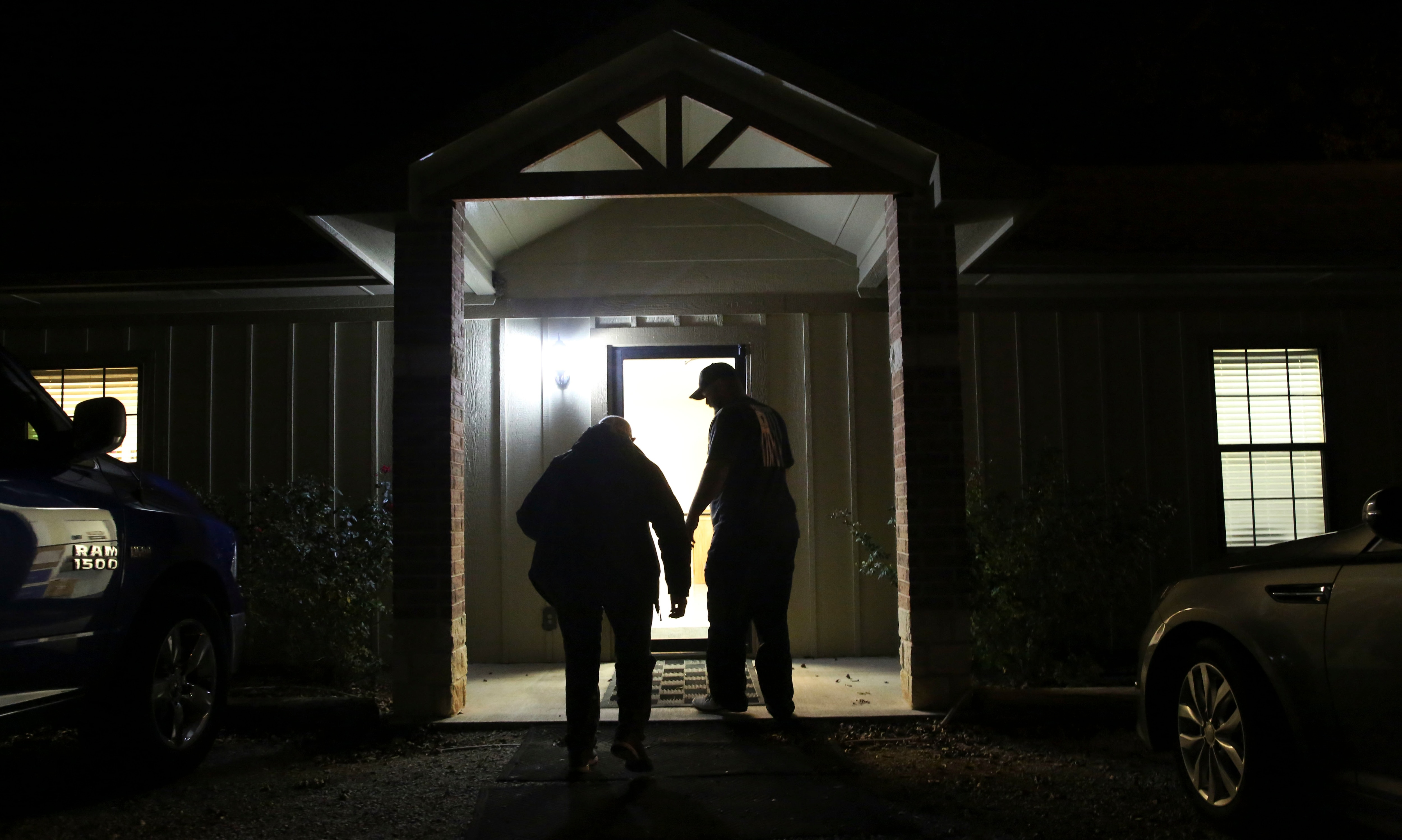 In this Wednesday, Dec. 7, 2016 photo, U.S. Army Veteran Richard Ress, right, helps fellow church member William Lynchard to a bible study at their rural church in Grayson County, Texas. Ress participates in a traveling veterans court with Judge John Roach. To veterans in the rural counties, some of whom wouldn't have been able to participate with a traveling court, say the opportunity is life-changing.
Photo Credit: LM Otero/AP
"This is not an easy program. I expect a lot, and I expect commitment. But getting to court, having access to the services, that shouldn't be the issue that prevents a veteran in one county from getting treatment available to a veteran in another county," Roach said.

"When I was accepted into the veterans' court, it was the first time I was treated like I wasn't just a number in the system," Ress said. "People took into consideration that I had served my country honorably and that I wasn't this person when I left to serve, that it changed me."

Estimates of the prevalence of service-related PTSD vary, but a 2014 Veterans Affairs study found that almost 30 percent of veterans returning from Iraq and Afghanistan who sought treatment at VA hospitals were diagnosed with PTSD symptoms.

The judge knew there were other veterans like Ress. He had overseen the Collin County veterans' court since 2013, and neighboring Rockwall County asked him to expand the program there later the same year.

The North Texas Regional Veterans Court, which encompasses those two counties plus the more rural Grayson, Fannin and Kaufman counties, was dedicated in October. The program can take up to two years to complete, depending on the treatment and progress of individual veterans. 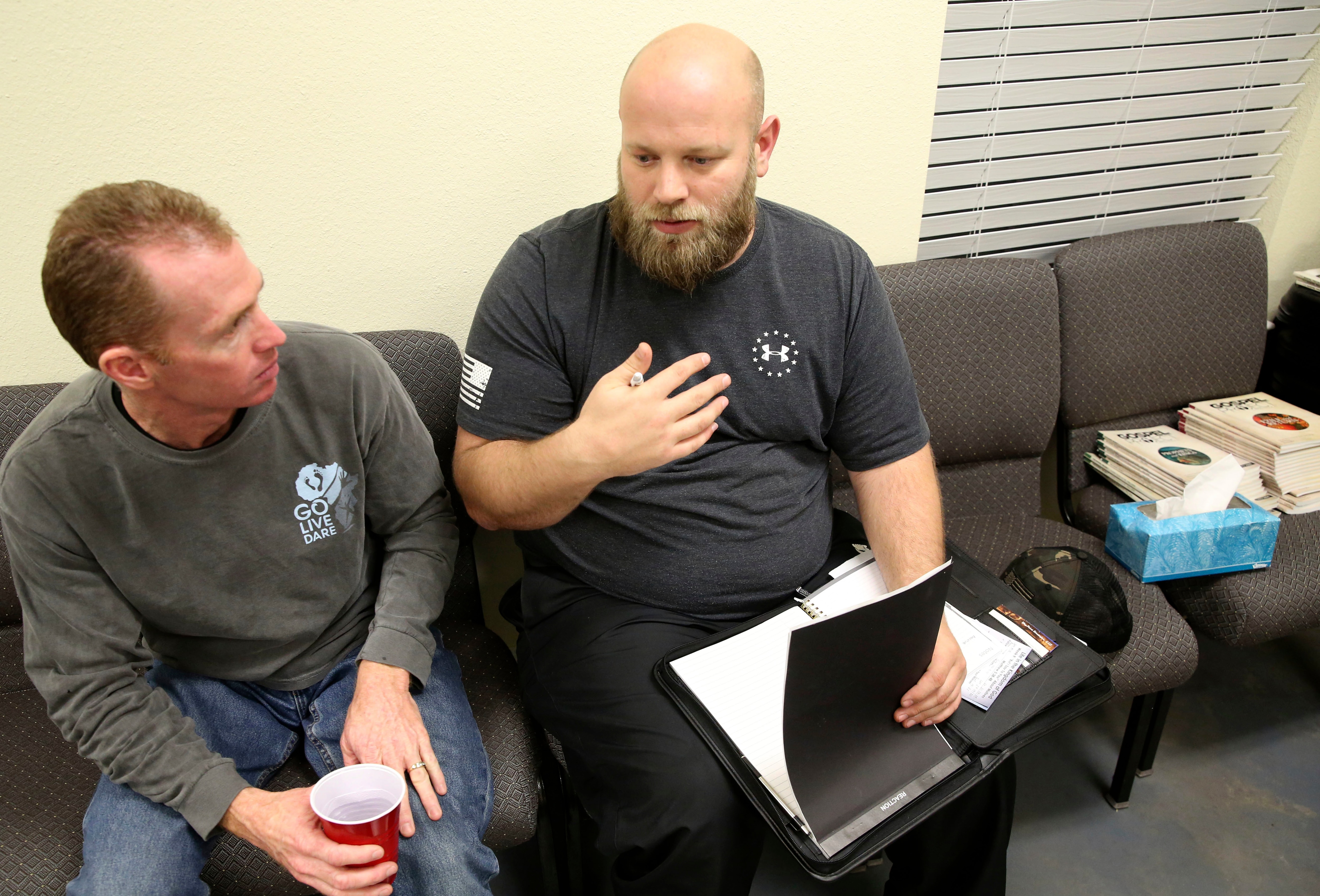 In this Wednesday, Dec. 7, 2016 photo, U.S. Army Veteran Richard Ress, right, speaks during a bible group meeting at his rural church in Grayson County, Texas. Ress participates in a traveling veterans court with Judge John Roach Jr. The traveling court serves veterans in five counties near Dallas who don’t have transportation. Veterans say the opportunity is life-changing.
Photo Credit: LM Otero/AP
As of mid-December, 52 veterans were enrolled, but that number can fluctuate. On one December morning at the Kaufman County Courthouse, the judge removed one man from the program for lying about his drug use and enrolled another who showed up asking for help.

"He's the reason this program works," said Michael Shupak, a veteran arrested on a half-dozen charges related to illegal steroids he was using to maintain muscle mass after a service-related injury.

Without the traveling court, Shupak said, he would not have known to seek counseling.

"I don't think I would have realized the mental health image and PTSD issues I had if I hadn't been made to see a counselor. It's changed the way I see things. I think it's made me a lot more accountable for my actions," he said.

For Ress, the court coming to him means access. He spent $55 on a taxi to get to criminal court after the 2015 arrest.

The judge helped Ress connect with volunteers who drive veterans to appointments and eventually helped him get a conditional license that requires him to blow into a Breathalyzer attached to the ignition of his car.

The National Center for Veterans Analysis and Statistics says about 30 percent of veterans live in rural areas, compared with about 15 percent of the country's overall population. The Department of Veterans Affairs and its Office of Rural Health have a five-year plan to improve access for rural veterans, but the plan does not specifically address veterans' courts, which are formed and funded by state or local agencies.

Thirty-three of the more than 450 veterans' court programs nationwide allow defendants or court personnel to attend hearings by video connection, according to court liaisons for the VA. But Roach is the only judge the VA could identify who voluntarily travels outside of his elected county to hold court.

He said video court hearings are valuable, but face-to-face contact is critical with veterans.

Ress, now 36, agrees. He plans to get a degree in counseling to help other veterans.

"There were times in my life where I didn't feel like I was worth anything to my family, my kids, society, to anyone," he said. "Through some of the interactions I've had in the program, I'm realizing that most people out there don't hate me or think I'm an awful person. Most people think I'm an OK person who just needs some help."

The End of the Endless War? | Reporters Roundtable