By Sarah El Deeb, The Associated Press and Lynn Berry, The Associated Press
Senior Russian military commander Sergei Rudskoi (L) speaks during a news briefing on the situation in Syria, Moscow, May 5, 2017. Russia on May 5 said it has already stopped bombing in areas of Syria set to be designated safe zones under an agreement inked with Iran and Turkey. / AFP PHOTO / Vasily MAXIMOV (Photo credit should read VASILY MAXIMOV/AFP/Getty Images)

BEIRUT — A deal hammered out by Russia, Turkey and Iran to set up "de-escalation zones" in mostly opposition-held parts of Syria went into effect in the early hours of Saturday.

The plan is the latest international attempt to reduce violence in the war-ravaged country, and is the first to envisage armed foreign monitors on the ground in Syria. The United States is not party to the agreement and the Syrian rivals have not signed on to the deal. The armed opposition, instead, was highly critical of the proposal, saying it lacks legitimacy. 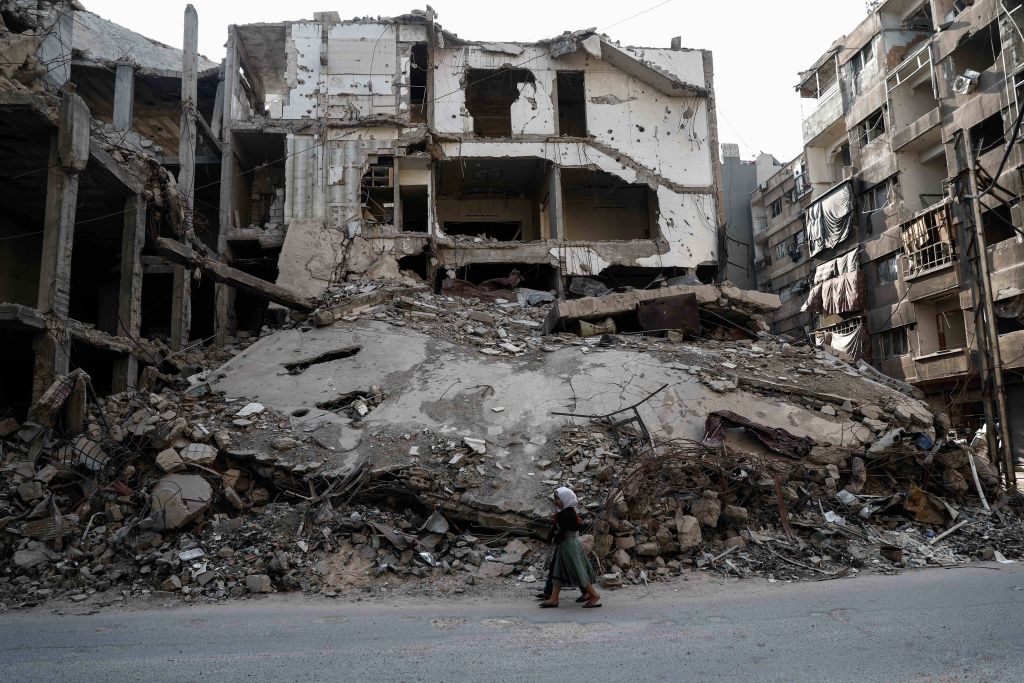 Syrian girls walk past destroyed buildings in the rebel-held town of Douma, on the eastern outskirts of Damascus on May 6, 2017. Fighting subsided in Syria after a deal signed by government backers Russia and Iran and rebel supporter Turkey to create four safe zones began to take effect, a monitor said.
Photo Credit: Sameer Al-Doumy/AFP via Getty Images
The plan, details of which will still be worked out over the next several weeks, went into effect at midnight Friday. There were limited reports of bombing in northern Homs and Hama, two areas expected to be part of the "de-escalation zones," activists said. There were no immediate reports of casualties.

It is not clear how the cease-fire or "de-escalation zones" will be enforced in areas still to be determined in maps to emerge a month from now.

Russian officials said it will be at least another month until the details are worked out and the safe areas established.

In the tangled mess that constitutes Syria's battlefields, there is much that can go wrong with the plan, agreed on in talks Thursday in Kazakhstan.

There is no clear mechanism to resolve conflict and violations— like most other previous deals struck by backers of the warring sides.

A potential complication to implementing the plan is the crowded airspace over Syria. The deal calls for all aircraft to be banned from flying over the safe zones.

Syrian, Russian, Turkish and U.S.-led coalition aircraft operate in different, sometimes same areas in Syria. It is not yet clear how the new plan would affect flightpaths of U.S.-led coalition warplanes battling Islamic State militants and other radical groups — and whether the American air force would abide by a diminished air space.

Russia and Iran — two of the plan's three sponsors — are key allies of President Bashar Assad's government and both are viewed as foreign occupation forces by his opponents. Rebels fighting to topple Assad are enraged by Iran's role in the deal and blame the Shiite power for fueling the sectarian nature of Syria's conflict, now in its seventh year.

Turkey, the third sponsor, is a major backer of opposition factions and has also sent troops into northern Syria, drawing the ire of Assad and his government.

Yet troops from the three countries are now expected to secure four safe zones. An official with Russia's military general staff said other countries may eventually have a role in enforcing the de-escalation areas.

He said "security belts" will be created along the borders of the "de-escalation zones" to prevent incidents and fighting between opposing sides. The checkpoints and observation posts will ensure free movement of unarmed civilians and humanitarian aid and will facilitate economic activities, he said.

Rebels have expressed concerns the deal is a prelude to a de facto partitioning of Syria into spheres of influence.

Osama Abo Zayd, a spokesman for the Syrian military factions at the Kazakhstan talks, told The Associated Press it was "incomprehensible" for Iran to act as a guarantor of the deal. A cease-fire is unsustainable in the presence of the Iranian-backed militias in Syria, he said.

The U.S. sent a senior White House official to the Kazakh capital of Astana, where representatives of Russia, Turkey and Iran signed the deal, but had no role in the deal.

The idea of armed monitors is a new element — observers deployed in the early years of the Syrian conflict, including U.N. and Arab League observers, were unarmed.

But it's difficult to imagine how many boots on the ground would be needed to monitor the yet to be mapped areas or how and where exactly Russian, Iranian and Turkish troops would patrol.

"If that happens, we would be looking at a more serious effort than anything in the past," Aron Lund, a Syria expert wrote in an article Friday.

Col. Gen. Sergei Rudskoi of the Russian General Staff, speaks to the media in the Defense Ministry in Moscow, Russia, Friday, May 5, 2017.

Lund said that from the outside, the agreement "does not look like it has great chances of success" and seems to "lack a clear mechanism to resolve conflicting claims and interpretations."

Late Friday, a Syrian opposition coalition, the High Negotiations Committee, denounced the deal in a strongly worded statement. The Western, Saudi-backed HNC said the deal lacks legitimacy and seeks to divide the country.

The HNC also said the deal was an attempt to give Syrian government troops military victories they could not achieve on the battleground by neutralizing rebel-held areas. It called on the U.S. and other Arab allied countries, to prevent the implementation of the deal.

A rebel commander in northern Hama said nearly an hour after the deal went into effect, battles raged with government forces. The area, south of Latamneh, is expected to be part of the deal. Jamil al-Saleh, the commander, said government shelling was intense amid an attempt to advance in the area, scene to fierce battles for weeks. "What deal?" he scoffed.

A previous cease-fire agreement signed in Astana on Dec. 30 helped reduce overall violence in Syria for several weeks but eventually collapsed. Other attempts at a cease-fire in Syria have all ended in failure.

The "de-escalation zones" will be closed to military aircraft from the U.S.-led coalition, the Russian official who signed the agreement, Alexander Lavrentye, said Friday. Under the plan, Assad's air force — and presumably Russian, too — would also halt flights over those areas.

In rebel-held Idlib, a protest was held Friday against the plan, denounced as a plot to "divide Syria."

"Any person or state who enters this land to divide it is the enemy of the Syrian people" activist Abed al-Basset Sarout told the crowd.

Some refugees were skeptical.

Ahmad Rabah, a Syrian refugee from Homs now in Lebanon, said he did not trust Assad's forces and going back to so-called safe zones would be tantamount to living in a "big prison."

The Pentagon said the de-escalation agreement would not affect the U.S.-led air campaign against IS.

"The coalition will continue to target ISIS wherever they operate to ensure they have no sanctuary," said Pentagon spokesman Marine Maj. Adrian J.T. Rankine-Galloway. ISIS is an alternative acronym for the Sunni militant group.

Rudskoi also suggested that Syrian government forces, freed up as a result of the safe areas, could be rerouted to fight against IS in the central and eastern part of Syria.

Another question left unanswered is how the deal would affect U.S. airstrikes targeting al-Qaida's positions in Syria.

U.S. warplanes have frequently struck the al-Qaida affiliate in the northern Idlib province, where the militant group dominates.

But under Thursday's deal, the entire province is designated to be one of the four "de-escalation zones."

Russian Deputy Defense Minister Alexander Fomin said that if implemented the deal will allow for the separation of the opposition from IS fighters and those of the al-Qaida affiliate. He did not elaborate.

Syria's government has said that although it will abide by the agreement, it would continue fighting "terrorism" wherever it exists, parlance for most armed rebel groups fighting government troops.

Revived in 2015, Super Squad winners had their first official recognition at Marine Barracks-Washington since a pause following 9/11.

A deal hammered out by Russia, Turkey and Iran to set up "de-escalation zones" in mostly opposition-held parts of Syria went into effect in the early hours of Saturday.

The Air Force's helmets of the future | MilTech

Why do kids keep falling from windows in military base housing?