Band of brothers: 3 siblings to graduate West Point together

By Michael Hill, The Associated Press

The band of brothers from Nederland, Texas, will graduate with the U.S. Military Academy's Class of 2017 on May 27. The first duty stations for the future Army officers are still being worked out, but it's clear to the brothers that their years of being just a short march from one another are numbered.

"It's kind of surreal to think that, 'Hey, all three of us actually made it here and we're kind of living our dreams, doing what we want to do,'" Sumner said. "And soon enough ... we'll be going off to our own separate duty stations." 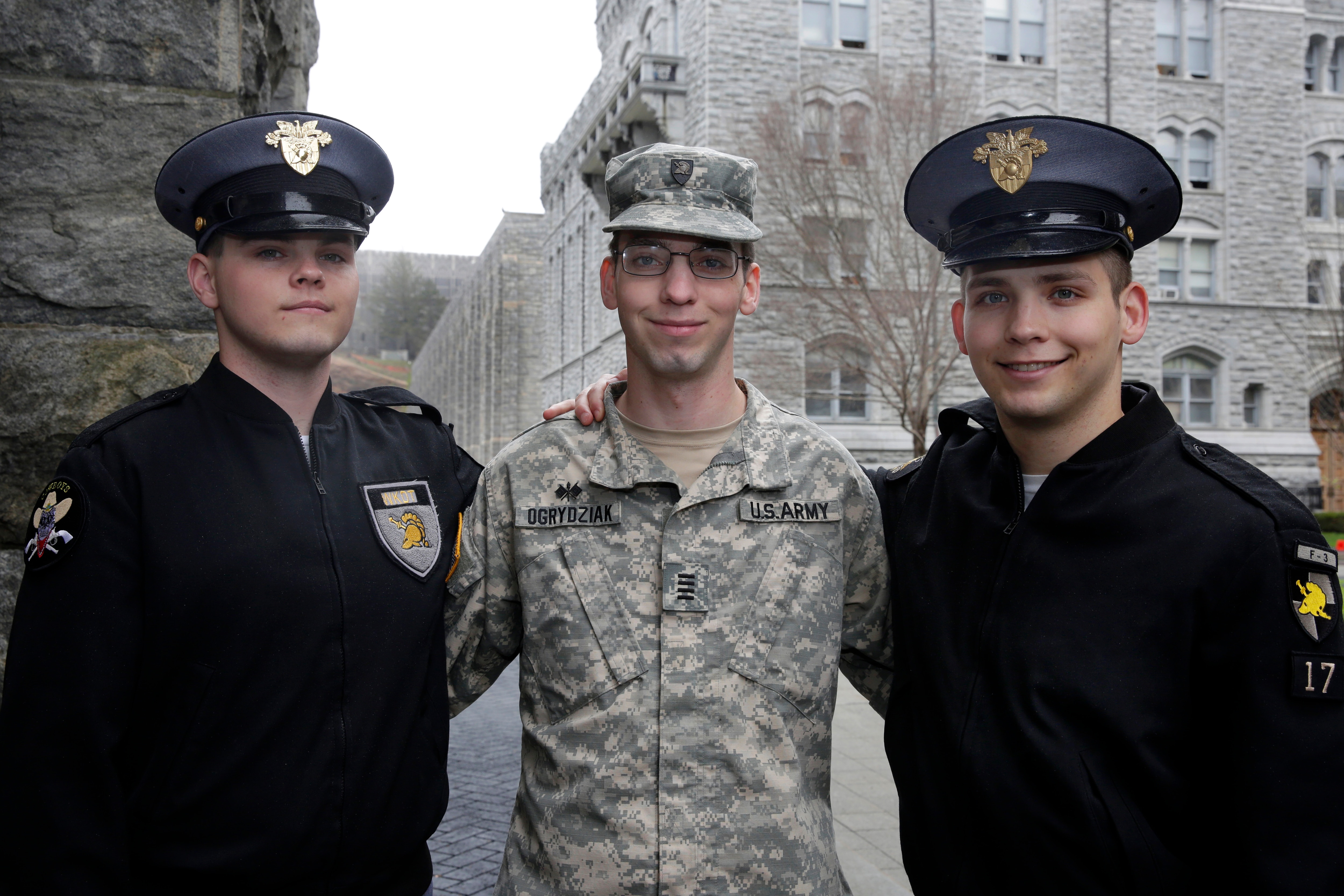 In this Friday April 21, 2017 photo, twin Cadets Cole Ogrydziak, left, and Sumner Ogrydziak, right, and younger brother Cadet Noah Ogrydziak, pose for a photo at the U.S. Military Academy, at West Point, N.Y. The three Texas brothers are set to graduate together from West Point. Noah, Sumner and Cole Ogrydziak will graduate with the U.S. Military Academy’s Class of 2017 on May 27, marking the first time in more than three decades that three siblings have finished at the storied institution at the same time.
Photo Credit: Richard Drew/AP
Cole and Sumner are 21-year-old twins. They are not identical but share the steady posture, close-cropped hair and old-school courtesy common among cadets. Older brother Noah just turned 23 and spent a year at West Point's prep school before entering the academy along with the twins on July 1, 2013.

Cole compares their West Point experience to having "automatic friends." They got used to snowy northeastern winters together, learned how to stand in formation and maneuver in the field. They share the nickname "O.G.," which is easier for fellow cadets to say than Ogrydziak.

But the Ogrydziaks are in different regiments and take different classes. They are three in a sea of 4,400 gray-clad cadets walking briskly among the imposing stone buildings here. Brotherly connections come when Cole asks Noah for help with a computer course or they share a pizza on the weekend.

"Every so often I'll see them during the day. But we'll try to eat dinner at nights together, and especially on weekends we'll get together and watch a movie. That's always pretty fun," Noah said. 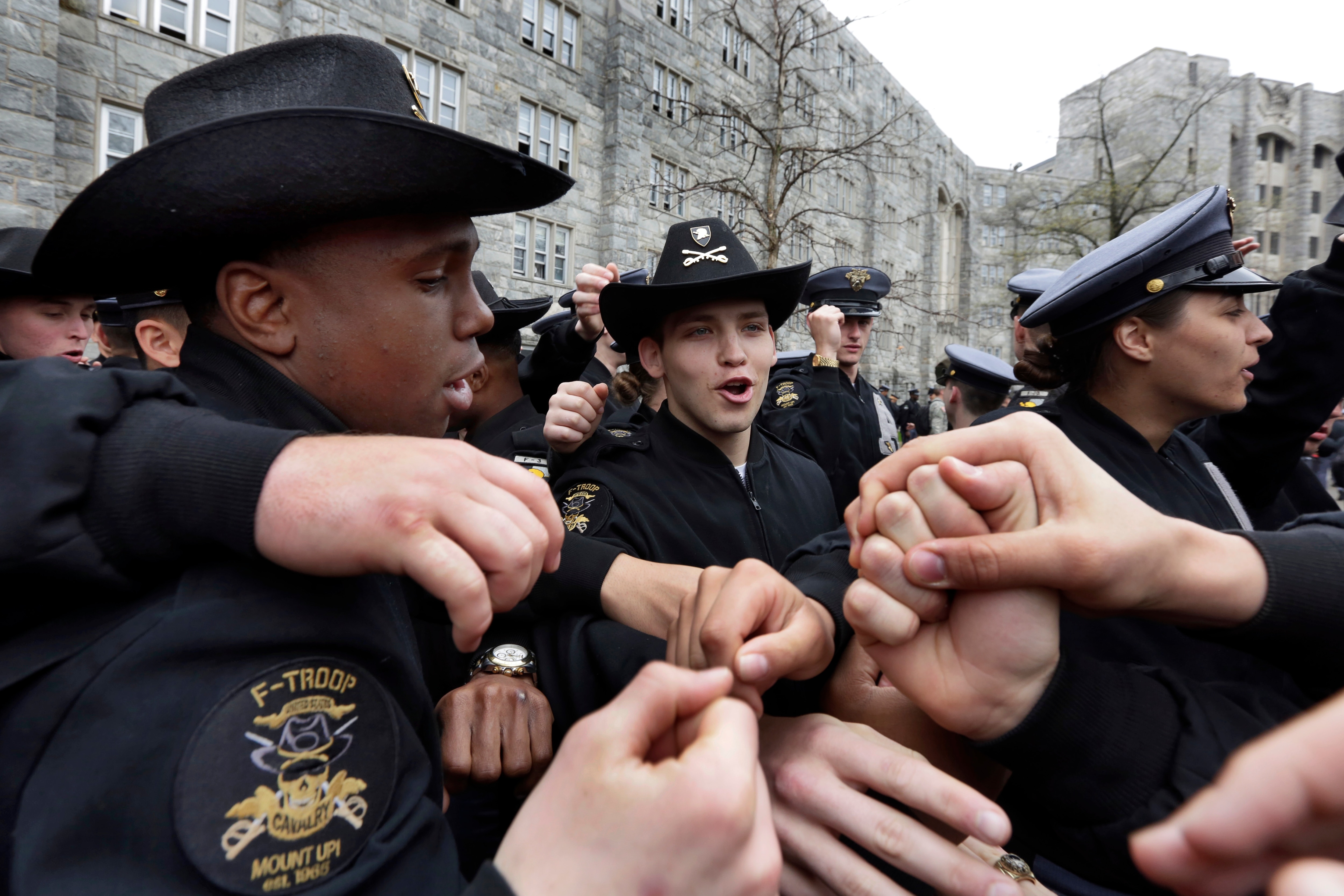 In this Friday April 21, 2017 photo, Cadet Sumner Ogrydziak, center, clasps hands with fellow members of F-Troop before lunch at the U.S. Military Academy, at West Point, N.Y.
Photo Credit: Richard Drew/AP
The last time three siblings graduated West Point together was 1985, when twins Rose and Anne Forrester became officers at the same time as their older brother, John. It's not clear how many other times three siblings have graduated together since the academy was established in 1802.

Less rare are cases in which three siblings simply attend West Point at the same time. The graduating class this year also includes Arianna Efaw, the third of three sisters from Denver to graduate here since 2014. The three sisters overlapped here for a year.

Sumner's assigned Army branch is engineers, and he's headed to South Korea. Cole is headed to a medical school to become a doctor and Noah will be in Signal Corps, and they do not yet know their destinations. But it's likely they will be scattered around the globe for at least the next several years. 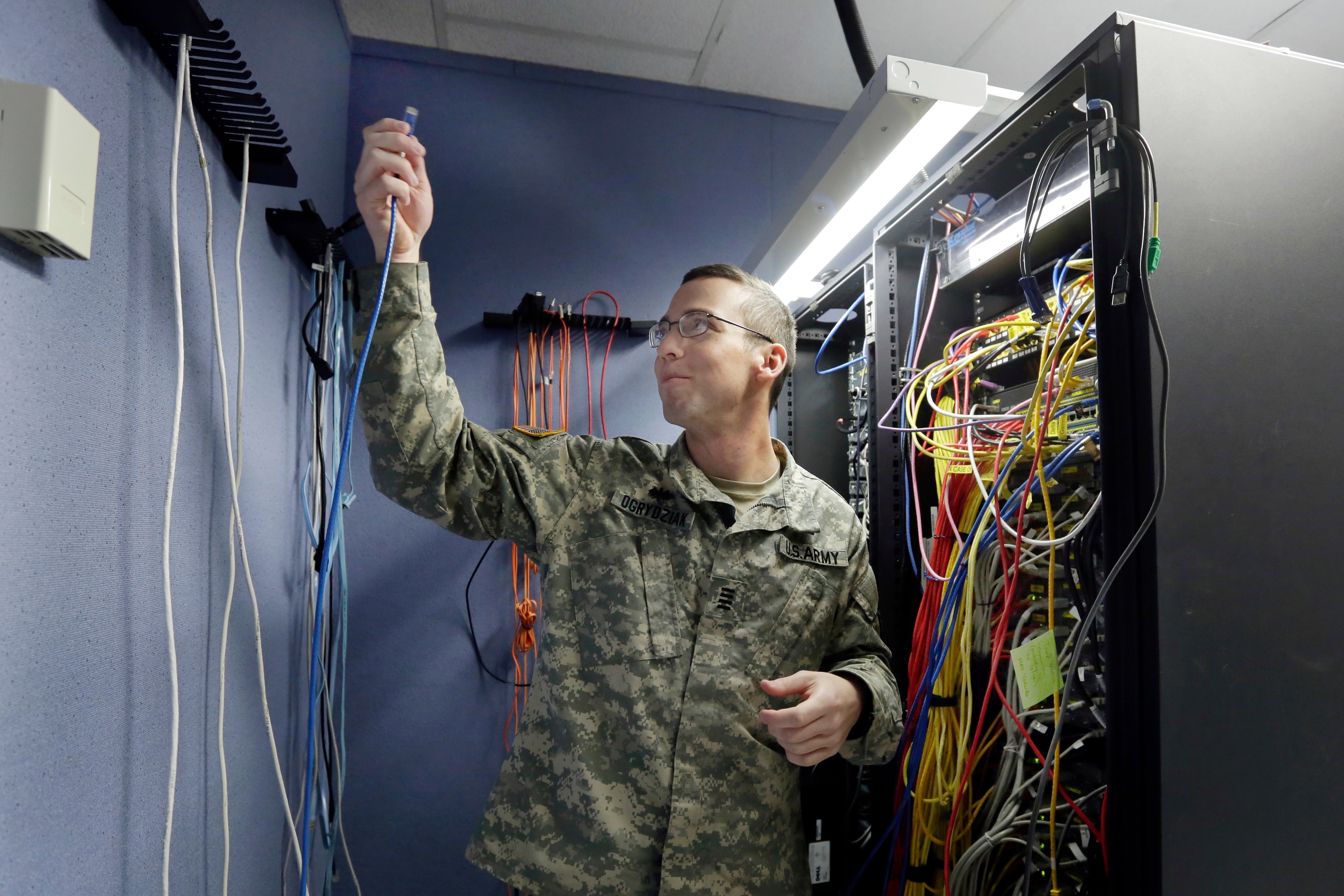 In this Friday April 21, 2017 photo, Cadet Noah Ogrydziak works with computer equipment in his Integrated System Design class at the U.S Military Academy, at West Point, N.Y.
Photo Credit: Richard Drew/AP
"I can't speak for my brothers, but if we stay in seven to 10 years, I think there's a good chance that we might end up picking the same duty station," Sumner said. "Maybe because we both want to go there or live together, or at least close by."

West Point has lost about 100 graduates in the war on terror since Sept. 11, 2001. Some of those deaths were announced in the cadet mess hall since the Ogrydziaks became cadets. The brothers, who are from a military family, shrug off questions about potential dangers ahead.

Their mother, Kristine, served in the Coast Guard for 10 years, and their father, Randal, is a Coast Guard captain who is retiring next month after 38 years of service. The oldest Ogrydziak brother, 26-year-old Vaughn, is a chemical engineer in the private sector.

Back in Nederland, the parents are full of pride for their youngest sons but understand the dangers.

"Ah boy, as a service member, I'm proud of them because I know they will do their best, they will give it their all, serve their country, and live up to core values of the Army: honor, respect and devotion to duty," said Randal Ogrydziak. "And Kristine and I pray to God they're kept out of harm's way." 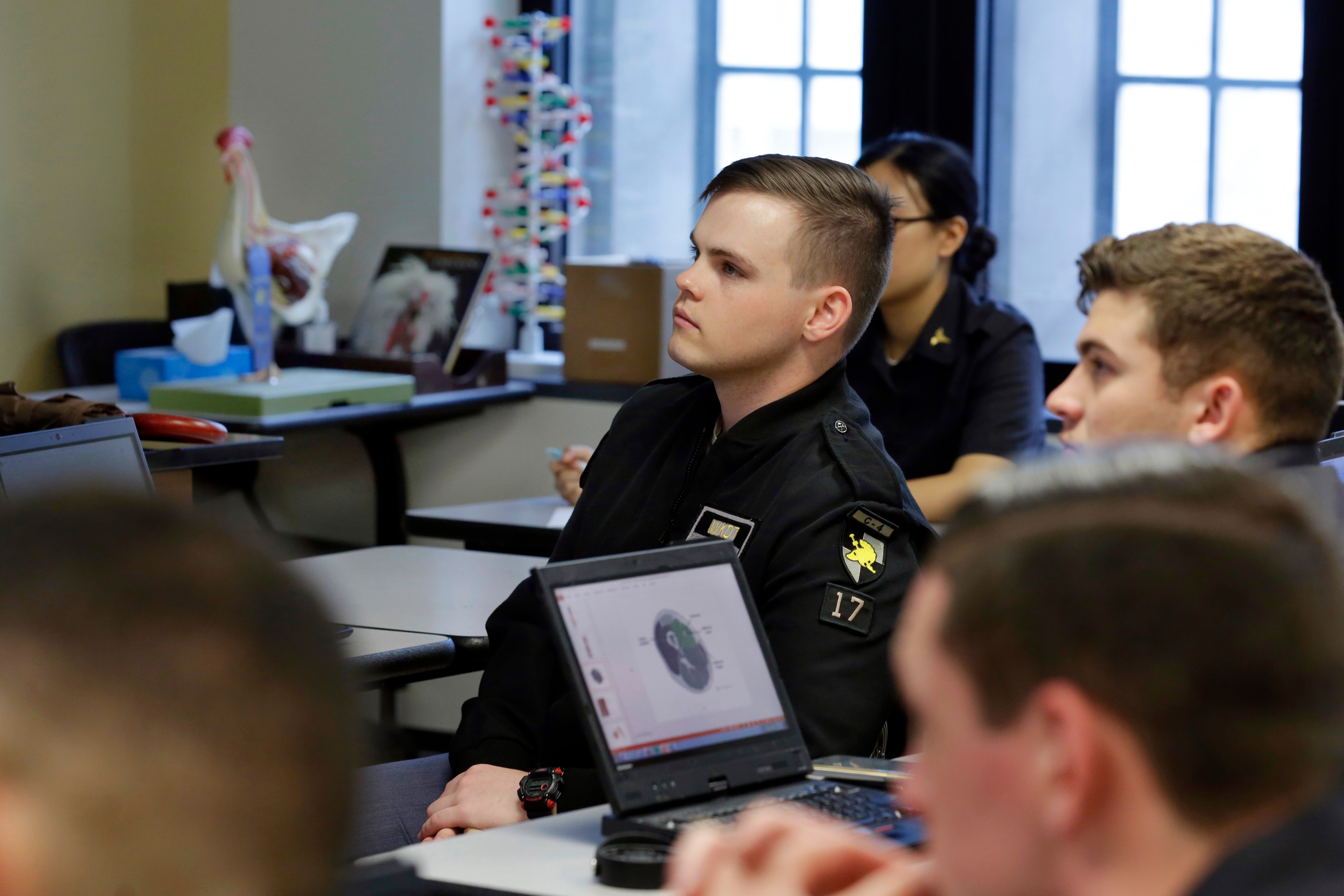 In this Friday April 21, 2017 photo, Cadet Cole Ogrydziak, center, attends an anatomy class at the U.S Military Academy, at West Point, N.Y.
Photo Credit: Richard Drew/AP
Randal is retiring in June, but not before performing one more heartfelt duty.

After graduation, the family will gather somewhere on West Point for the traditional "pinning ceremony." Randal will exercise his privilege as a commissioned officer to personally give his sons their oaths. The parents will place second lieutenant bars on each of their boys' shoulders.

"He'll be our first salute, too," Sumner said. "And I couldn't be more happy."

During its last5 deployment, which concluded in Octobe, the Reagan not only operated in U.S. 7th Fleet but also 5th Fleet to support the withdrawal of U.S. and coalition forces from Afghanistan.

The Army says its new master human resources platform is on track for full implementation Sept. 30.

Wildfire monitoring, other state missions in jeopardy without a Space Guard, these officials say

Space Force officials want to move away from the traditional Guard and Reserve. These colonels say that's a bad idea.

The teams use focus groups and on-the-ground interviews to dig deeper than traditional climate surveys.

Diversity and inclusion are critical to future military readiness

The Defense Department’s greatest strength is its people.

The supply of infant formula is running 40 percent to 50 percent below normal in commercial stores, but the most critical, specialized formulas have been even more depleted.

The investigation comes amid new scrutiny on the U.S. military for strikes that cause innocent deaths.

The Pentagon has modeled a new high-level team to rush military aid to Ukraine after the group it used to rush supplies to troops in Afghanistan, Iraq and Syria, according to a memo obtained by Defense News and sources familiar with the matter.