Defense Secretary James Mattis on Friday signaled that his tenure at the Pentagon will bring closer ties between the military, State Department and America's intelligence agencies.

The retired Marine Corps general was sworn into office by Vice President Mike Pence during a brief ceremony in the Eisenhower Executive Office Building, which adjoins the White House. Moments later, Mattis released a memo to the Defense Department in which he extolled the military's role, along with the intelligence community, as "sentinels and guardians of our nation."

Here's the memo in full:

It's good to be back and I'm grateful to serve alongside you as Secretary of Defense.

Together with the Intelligence Community we are the sentinels and guardians of our nation. We need only look to you, the uniformed and civilian members of the Department and your families, to see the fundamental unity of our country. You represent an America committed to the common good; an America that is never complacent about defending its freedoms; and an America that remains a steady beacon of hope for all mankind.

Every action we take will be designed to ensure our military is ready to fight today and in the future. Recognizing that no nation is secure without friends, we will work with the State Department to strengthen our alliances. Further, we are devoted to gaining full value from every taxpayer dollar spent on defense, thereby earning the trust of Congress and the American people.

I am confident you will do your part. I pledge to you I'll do my best as your Secretary. 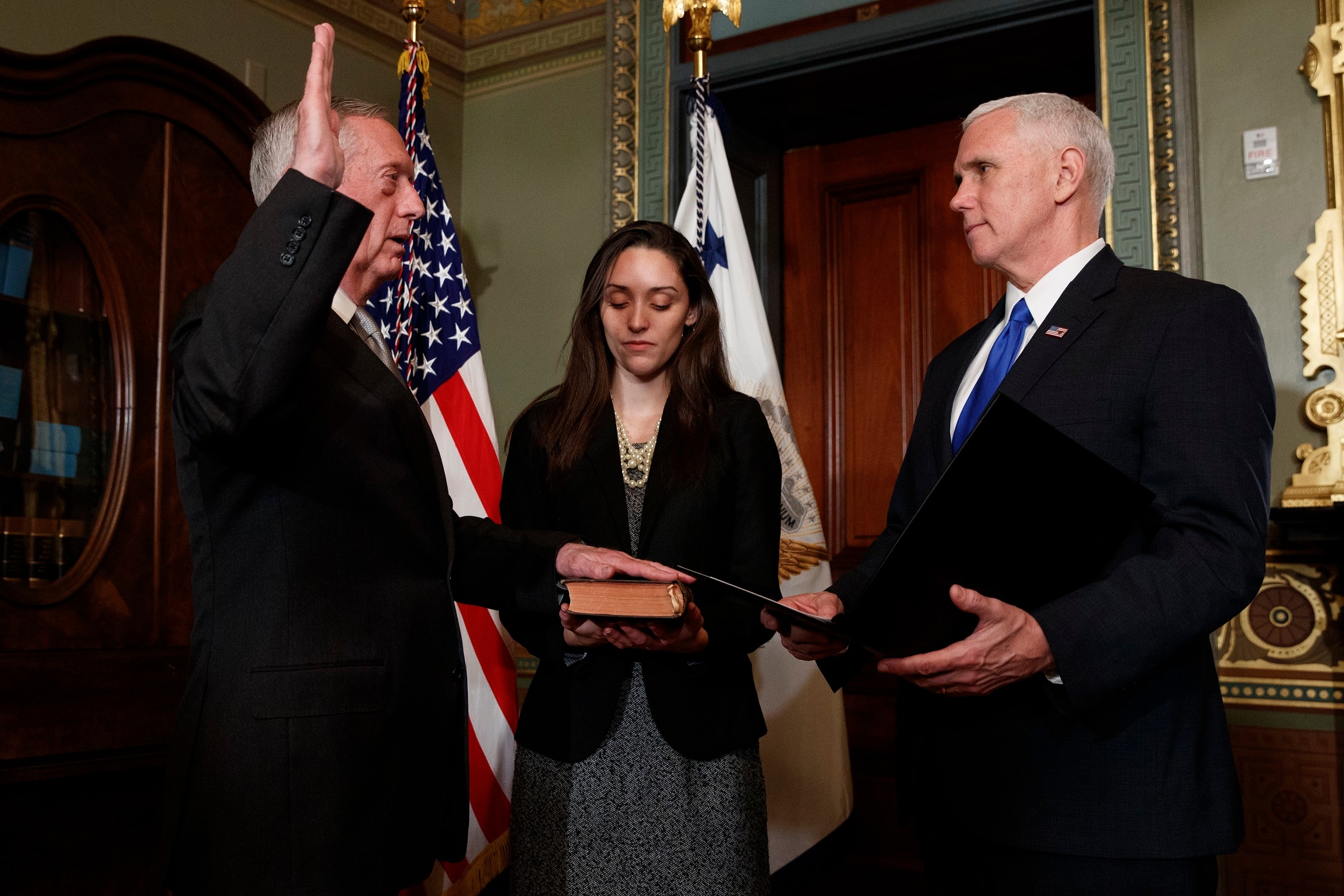 Vice President Mike Pence administers the oath of office to Defense Secretary James Mattis, Friday, Jan. 20, 2017, in the Vice Presidential Ceremonial Office in the Eisenhower Executive Office building on the White House grounds in Washington.
Photo Credit: Evan Vucci/AP
Mattis, 66, retired from the Marine Corps in 2013 after a military career spanning five decades. He last served as the head of U.S. Central Command, a post that gave him oversight of the wars in Afghanistan and Iraq.

The Senate confirmed his nomination Friday by a vote of 98-1. The sole "no" vote was cast by Sen. Kirsten Gillibrand, a New York Democrat.

During his confirmation hearing earlier month, some lawmakers, including Gillibrand, expressed apprehension about Mattis' ability to approach the job as a civilian — not a 44-year military officer. Mattis sought to assuage those concerns, saying the top role of defense secretary mandates a careful balance of military and diplomatic solutions.

"We shouldn’t be turning to the military," he said, "to answer all of our problems in the world."

. With reporting by Leo Shane III and Joe Gould.

As fighter jets closed in on Chinese balloon, hobbyists were listening

A group of aviation enthusiasts was scanning radio frequencies for the exchanges between the pilots as an F-22 fired a missile and downed the balloon.

Space Force vows ‘above and beyond’ cleanup of Maui spill

The U.S. government is working to provide aid to earthquake victims in the Middle East.

The dock landing ship Carter Hall is spearheading the Navy’s balloon debris recovery efforts and collecting remnants near where it collapsed.

As fighter jets closed in on Chinese balloon, hobbyists were listening