By William Robert Ferrer
PERMISSION HAS BEEN SENT TO PHORELEASES/SIKES ------------ In this Feb. 23, 2016 photo provided by Jon Wright, Kate Pimental stands at the Marine Corps Recruiting Substation in Portland, Maine. Pimental wears a crew-neck T-shirt that covers a tattoo just below her collarbone that says, "Let your smile change the world but never let the world change you." The U.S. Marine Corps has a policy prohibiting visible tattoos. On Thursday, March 10, 2016, The Corps amended its rules to allow women to wear crew-neck T-shirts, and accepted Pimental, 20, who can cover the tattoo she got shortly after turning 18. (Jon Wright via AP)

SEATTLE — The American flag, when borne on the shoulder patch of an active-duty soldier, is supposed to be reversed, says Timothy Mangolds.

"It's supposed to commemorate (that) you're always running toward battle" with the flag appearing as if it's flowing behind you, explains the 27-year old who served in the Army from 2009 to 2012.

When their lieutenant was killed in action in Kirkuk, Iraq, in 2011, Mangolds and his platoon decided to get identical American flag tattoos. But Mangolds' tattoo, the colors of which emulate the subdued palette found on combat uniforms, is righted, with the stars on the left, as you might see on a flagpole or a lapel pin.

After some discussion, Mangolds' platoon had agreed it would be proper to adopt the more conventional orientation. "As a sign of respect to him. Because he's going back home," Mangolds says. 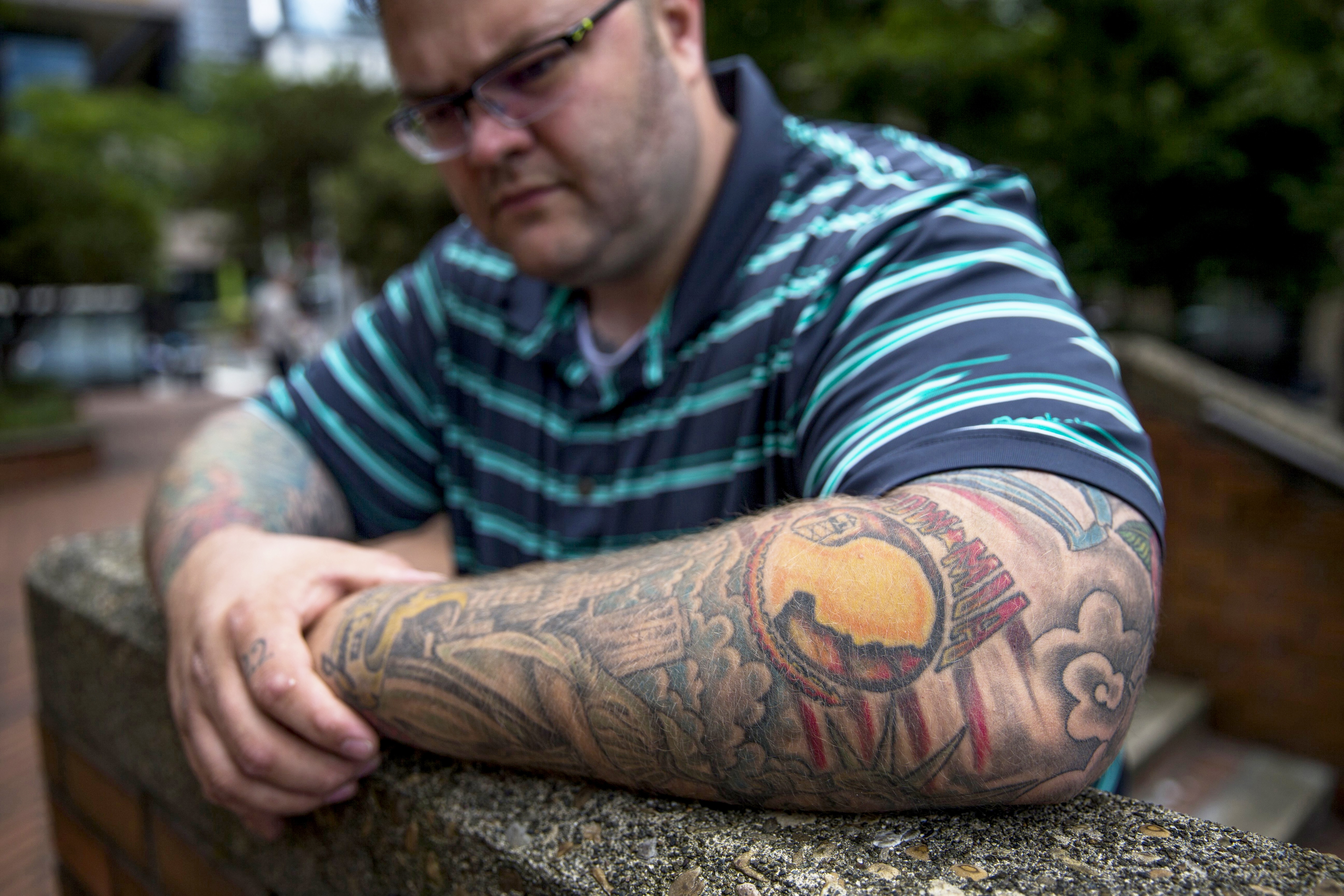 In a June 28, 2017, photo, Veteran Joshua Wheeldon shows his POW-MIA tattoo, in Seattle, Wash. Many active service members and veterans boast similar artwork on their arms, legs, backs and hands, expressing a dedication words perhaps cannot.
Photo Credit: Kjell Redal/The Seattle Times via AP
The tattoo is a reminder of his lieutenant's sacrifice. "This guy, had a wife, he had a kid, and they (have) to live their life without him even though he's there in spirit," Mangolds says. "It's just a constant reminder to take advantage of what you have because he was young when he died. He was only 25. You know life could end at any second, at any moment."

Many active service members and veterans boast similar artwork on their arms, legs, backs and hands. Expressing a dedication words perhaps cannot, these bodily remembrances tell tales of loss, service, patriotism and resistance. Some of these stories, like Iraq veteran and Auburn native Joshua Wheeldon's, are novels, unfolding over vast swaths of skin.

Listening to Wheeldon, 33, describe his tattoos is like listening to a man thumb through an old photo album. Unsure of where to start, he speaks first of a tattoo that mimics one his grandfather had. "My grandpa had that eagle on his forearm. And he was in the Navy in the '50s. Myself, I was in the Army from '04 to '09," he says. 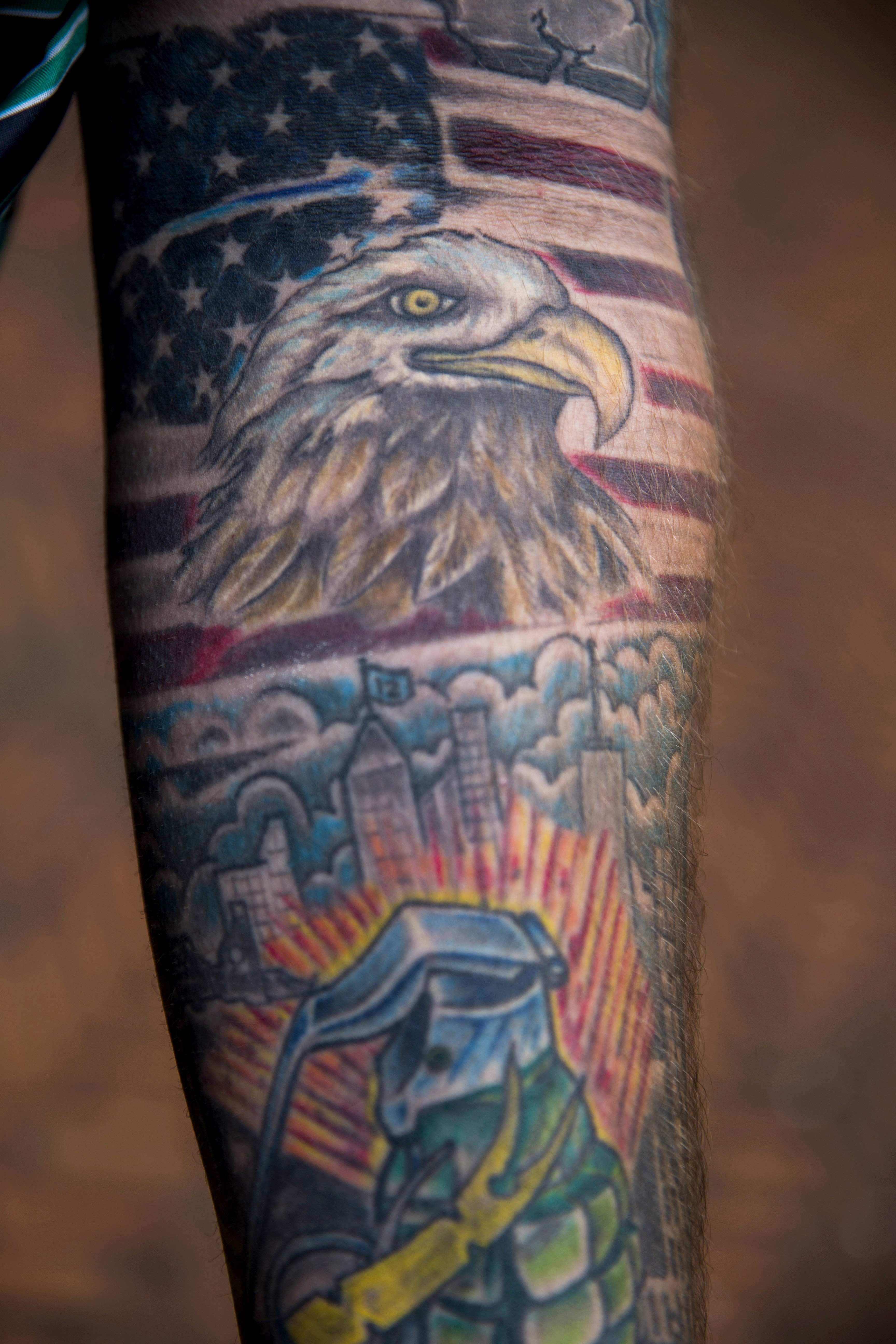 In a June 30, 2017 photo, Iraq veteran and Auburn native Joshua Wheeldon displays the various tattoos on his left arm, in Seattle, Wash. He says the eagle is one of his favorites.
Photo Credit: Ellen M. Banner/The Seattle Times via AP
Another captures Wheeldon's attention. "One of my friends got killed in Afghanistan so I got a yellow ribbon tattooed around my wrist with his name on it. And it's, like, pulling a grenade pin."

Later, he continues, "Then my great-uncle was a POW in World War II, so I have the POW and MIA flag on my arm."

"And then my right arm: I have, like, my dad was in the Navy so I have King Neptune, and the ship my dad was on and an anchor," Wheeldon says. He stops and summarizes the rest: "And a whole bunch of stuff like that."

Perhaps Wheeldon's most devastating tattoo is a simple figure on his finger. It's a small but conspicuous 22 — the number of veterans who kill themselves every day in the United States, according to a 2012 report authored by the United States Department of Veteran Affairs. (The study has since come under question.)

"Four of my buddies killed themselves the year before last," Wheeldon says.

Wheeldon's tattoos help him remember their stories. "It's a piece of you; you don't want to forget. It's something that will live with you forever." 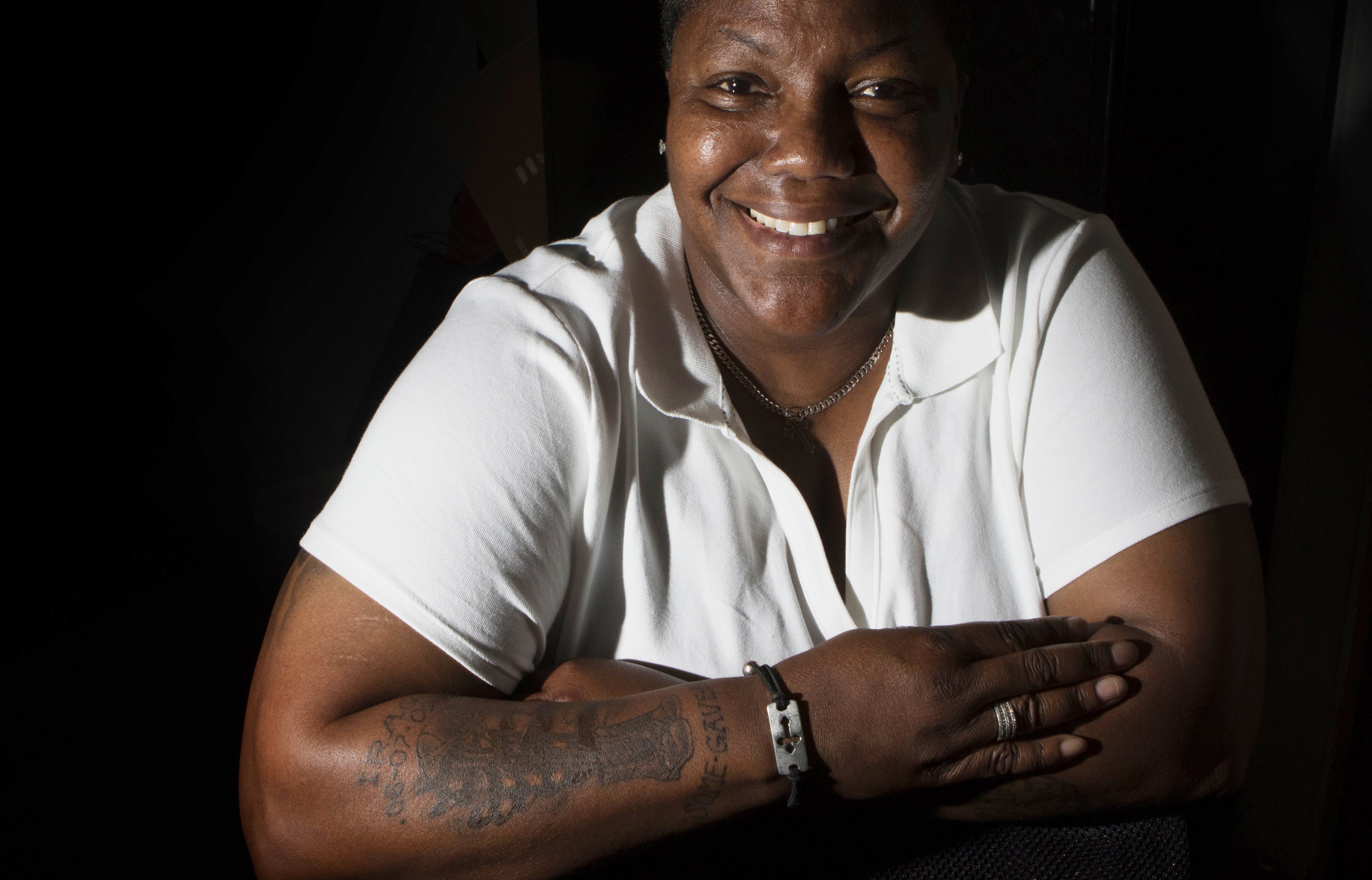 In a June 30, 2017 photo, retired Staff Sgt. Monique Brown shows a tattoo of the Fallen Soldier Battle Cross on her lower arm, in Seattle, Wash. The Renton resident had it tattooed in honor of a sergeant who was killed when they were both serving in Iraq.
Photo Credit: Ellen M. Banner/The Seattle Times via AP
That's how Monique Brown, who served 26 years in the Army, regards her tattoo of the Fallen Soldier Battle Cross, a battlefield monument fashioned from a rifle, a helmet and a pair of combat boots. Like her memories of her fellow soldiers, the permanent ink won't fade.

"I will never forget these guys because every time I look at my arm, that will be there. And that will remind me of what I went through. But it will also remind me of not bringing them home," she says.

Sgt. Long, Brown says, was among those who didn't make it home. While in Iraq from 2006 to 2007, Brown worked in the base's dining facility, where she remembers setting aside special treats for the infantry soldiers going out on the wire (off-base).

"If we got special shakes, I would give them those," she says. "And I would hold back the special protein bars for those guys."

One day, Sgt. Long approached Brown. "He came to me with this look in his eye, I'll never forget it, (it) kind of haunts me, and he said, 'Sgt. Brown I just want to thank you for taking care of me and the guys so much, you always make sure we have what we need out there,'" recalls Brown, 50, of Renton.

That night communications on the base were blacked out, which generally indicates that someone has died or been injured. "And it turns out it was Sgt. Long," Brown says. He had stepped on a pressure plate earlier that day, according to Brown. "And I can never forget that look in his eyes," she says.

Monica McNeal, 55, will never forget her son Eric Ward. The tattoo on her wrist is another way for her to retain her connection to her son, who was just 19 when he was killed in Afghanistan in 2010.

Scrawled in the handwriting of her son's high-school girlfriend, the tattoo reads "gan eagla" or "without fear" in Gaelic. Her son had the same phrase on his chest.

McNeal, of Edmonds, is the president of Washington's chapter of American Gold Star Mothers.

"It's (the tattoo) an opportunity for me to continue to educate Americans about the real costs of war and about a Gold Star Mom," she says.

The veteran and activist, 28, who served in Iraq in 2010 and South Korea in 2012, sports a sleeve of bleak, black images that combine protest imagery and post-apocalyptic visions of a war-torn world. One piece is called "Anti-American Imperialism."

"It's a skull with its mouth wrapped into an American flag with rubble at the bottom, essentially representing the effects of our presence around the world and the effects of the wars and our interests," says the Kent resident.

Some people shy away from the intensity of his experiences and message, Ribaudo says. "Citizens, nonveterans, always call for 'support our vets, support our soldiers.' And then once you start showing symptoms, or you open up about your experiences, they tend to walk away, or say I've got to go," he says.

A small tattoo can make a big statement.

Estabrooks, the Oregon Women Veterans Coordinator, was stationed in Germany from 1977 to 1980 and was one of the first to undergo gender integrated basic training at Fort Jackson, South Carolina.

"It was a huge experiment, I later found out," says the Portland resident.

Estabrooks, 58, stayed in the Army for three years before discharging, in part, she says, because of how women were treated. "There were some pretty strict limits on women serving back then," Estabrooks says. "There were still a lot of jobs we weren't allowed to do."

Now, on her shoulder, Estabrooks has a tattoo of worn pink Army boots, draped in pearls and dog tags.

"Here's my message to the world," she says referring to the icon. "I'm a woman, I was in the Army, and I proudly served."

Information from: The Seattle Times,

The more than $150 million renovation of the Cadet Chapel at the U.S. Air Force Academy in Colorado Springs is going to take months.

CENTCOM officials did not name the individual targeted or say how many civilian casualties may have resulted from the strike.

Oil found in water for military families in Hawaii, Navy confirms; some residents moving to hotels

As officials flush the petroleum contaminants out of the system, some families have been offered hotel rooms; others will receive temporary lodging allowance.

Extremist groups might offer some familiar rhetoric to veterans.

While many Americans may have seen the end of the forever wars as the cap on two decades’ worth of war spending, the job of Veterans Affairs has only just begun — and will continue for decades.

During the war, he was a member of the renowned Easy Company.

His wife, Elizabeth Dole, posted the announcement Sunday on Twitter.

The last known call between the leaders was in July.

"China is not 10 feet tall. This is America,” Secretary of Defense Lloyd Austin said Dec. 4. “America isn’t a country that fears competition."