AMERICA'S MILITARY: Readiness 'on a shoestring'

By Andrew Tilghman
The United States Coast Guard performs a demo near 16th Street in Ocean City during the Ocean City Air Show on Saturday, June 18. 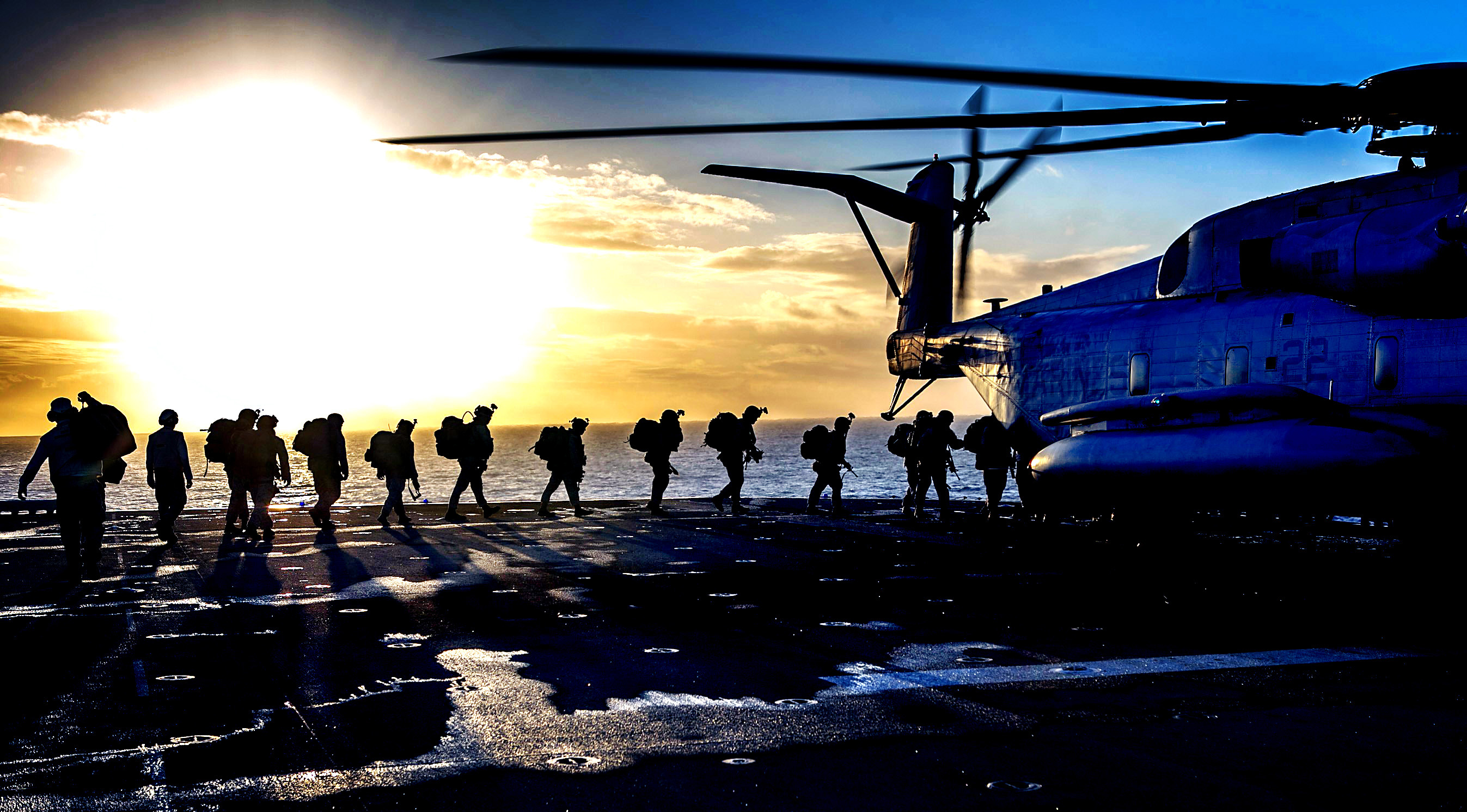 A ride at sunset
Photo Credit: Cpl. Codey Underwood
But beyond the Capital Beltway, at military installations across the country and around the world, the picture seen through the eyes of rank-and-file service members is vastly different.

By and large, most troops say their units are plodding along, business as usual. And they sometimes wonder what all the hand-wringing is about.

"When they talk about readiness ... I honestly don't know they are talking about," said Sgt. 1st Class Jose Fernandez, an infantryman at Fort Drum in upstate New York, an Iraq and Afghanistan veteran and a married father with 17 years of service.

At his post, Fernandez is not seeing any signs of a readiness problem or budget crunch. Large-scale infantry exercises continue for the soldiers at Drum, and the post is still full of contractors working on new fiber-optic networks and expanded garrison facilities.

"Construction has been going non-stop," he said.

Fernandez's views are common across the force. A Military Times survey of about 2,300 active-duty troops finds that three-quarters say readiness in their unit is either good, high or optimal. Only 7 percent described their unit's readiness level as poor. The results for the four services were roughly similar.

Individually, service members feel mission-ready. When asked whether they agreed with the statement: "I am well trained for my military job," 78 percent responded positively, down relatively slightly from the 2009 figure of 86 percent, when defense budgets were still soaring.

To be sure, rank-and-file troops might not see the full military readiness picture.

"What the guys from the field see is near-term readiness, readiness for the fight today. They can't see what readiness might be in five, 10 or 15 years from now when the equipment they are using today may no longer be serviceable," said Todd Harrison, a military expert with the Center for Strategic and Budgetary Assessments in Washington.

It's impossible to rely on service members in the field today to provide that long-term readiness picture, he said, adding that ultimately there is no hard definition of readiness.

The survey results are an "interesting data point, but its still a subjective assessment of readiness based on individuals and the limited knowledge that they have."

Harrison is critical of the military for lacking good metrics to measure readiness.

"We don't really know enough ... to make an assessment one way or the other. When the [service] chiefs talk about how training and maintenance has been cut back, what they don't talk about is how our performance has declined. That is what we need to hear: Has it declined? We don't know."

In March 2013, Congress allowed a law to take effect imposing "sequestration" of defense money, in effect capping the Pentagon budget at levels far lower than previously planned. A deal brokered on Capitol Hill in December 2013 softened the blow of the defense spending caps for 2014 and 2015. Yet many senior officers worry about what will happen in 2016 when that deal expires and the full impact of the law kicks in again.

Maj. Gen. Ted Martin, commander of the National Training Center at Fort Irwin, California, one of the Army's largest training facilities, said he sees no significant impact from budget cuts at the moment.

In 2013, budget pressures forced NTC to cancel four of its 10 brigade-level, month-long exercises, Martin said in a recent interview. Yet this year, NTC has returned to a full schedule of 10 exercises.

"We are funded … I feel good about the quality of the training we are providing," Martin said. "It's the uncertainty about the future that makes it difficult. I don't know what the future holds. Will we be able to maintain this level of training?"

One pocket of the force where troops express specific concern about readiness is in the aviation community. Many pilots and maintainers worry about an aging fleet that has been used aggressively for a decade and is requiring more money and manpower to stay aloft.

"Airplanes are flying broke," said one Air Force lieutenant colonel and former fighter pilot, referring to planes with problems that are not severe enough to ground them but increase the safety risks for pilots.

"These airplanes are flying into uncharted territory. … I'm concerned. Just like if your car was old, you'd be concerned that the risks go up of something going wrong. Though planes get much more maintenance, there's only so much you can do."

He complained that it can take more than a month to get the right part for the aging F/A-18 fleet. But he and the sailors in his shop have learned how to work around the traditional logistics supply system with a process known as "cannibalization" — fixing broken jets by removing working parts from the grounded aircraft that are due for a complete overhaul.

Marine Lt. Col. Colin Smith, commander of a combat engineer battalion, said his battalion is well-prepared for its core mission now. But he worries that readiness will take a big hit next year.

"We haven't felt the pinch in training or ammo yet, but we'll see it," Smith said. "The immediate impacts of sequestration is in lack of funding for facilities and future infrastructure projects. Fixing a barracks that was supposed to last 15 years ... there's not the money to fix it."

Smith said his own unit's building is Spartan because budget cuts forced the Marine Corps to halt the construction project before completion. "The building is shiny and clean on the outside and on the inside, I have a warehouse instead of an office," Smith said. "Thankfully, in SoCal, it's sunny."

Fernandez, the soldier, said the biggest readiness issue he sees is a shrinking force, which is affecting the Army most dramatically.

"The only real place we've seen any of the budget cuts is in people losing their jobs," he said, noting that many noncommissioned officers are anxious about getting promoted before up-or-out rules end their Army careers.

Readiness concerns in Washington seem especially abstract for the hundreds of thousands of soldiers and Marines in the combat arms career fields.

"We're in the infantry — all we need is an open field and I can train my guys to get done what needs to be done to make sure our soldiers are getting ready," Fernandez said. "We make do with what we have and I think it's been like that forever and ever."

About 70,000 subscribers received e-mail invitations to participate. Others were recruited via social media. In total, about 10,000 respondents completed the survey, including 2,299 who identified themselves as current active-duty personnel.

The sample is not a perfect representation of the military as a whole; it over-represents soldiers, officers and noncommissioned officers, and under-represents junior enlisted personnel. However, it is representative of the more senior and career-oriented members of the force who run the military's day-to-day operations and carry out its policies.

After the survey's completion, Military Times reporters spent several months interviewing dozens of active-duty survey respondents, speaking with them in detail about their views on military life today. In some instances, service members asked not to be identified so they could speak more candidly about military policy, senior leaders and political views.

Military Times has conducted a similar survey routinely for the past 10 years. Survey data cited from years prior to 2014 are based on those survey results. This is the only long-term, independent tracking survey of its kind.

The voluntary nature of the survey, the dependence on e-mail and the characteristics of Military Times readers may affect the results. Statistical margins of error commonly reported in opinion surveys that use random sampling can't be calculated for this survey.

More virtual health care is likely to be an option.

A letter to the next US president: Here’s how you can fix our military

It’s hard to imagine the NFL only picking players based on subjective recommendations. So why does the military?

Searchers found no remains immediately after the battle nor any evidence that enemy forces held the sergeant as a prisoner of war.

They will still need to be approved by the Senate before taking the helms of the Navy's 7th and 5th fleets.

A letter to the next US president: Here’s how you can fix our military