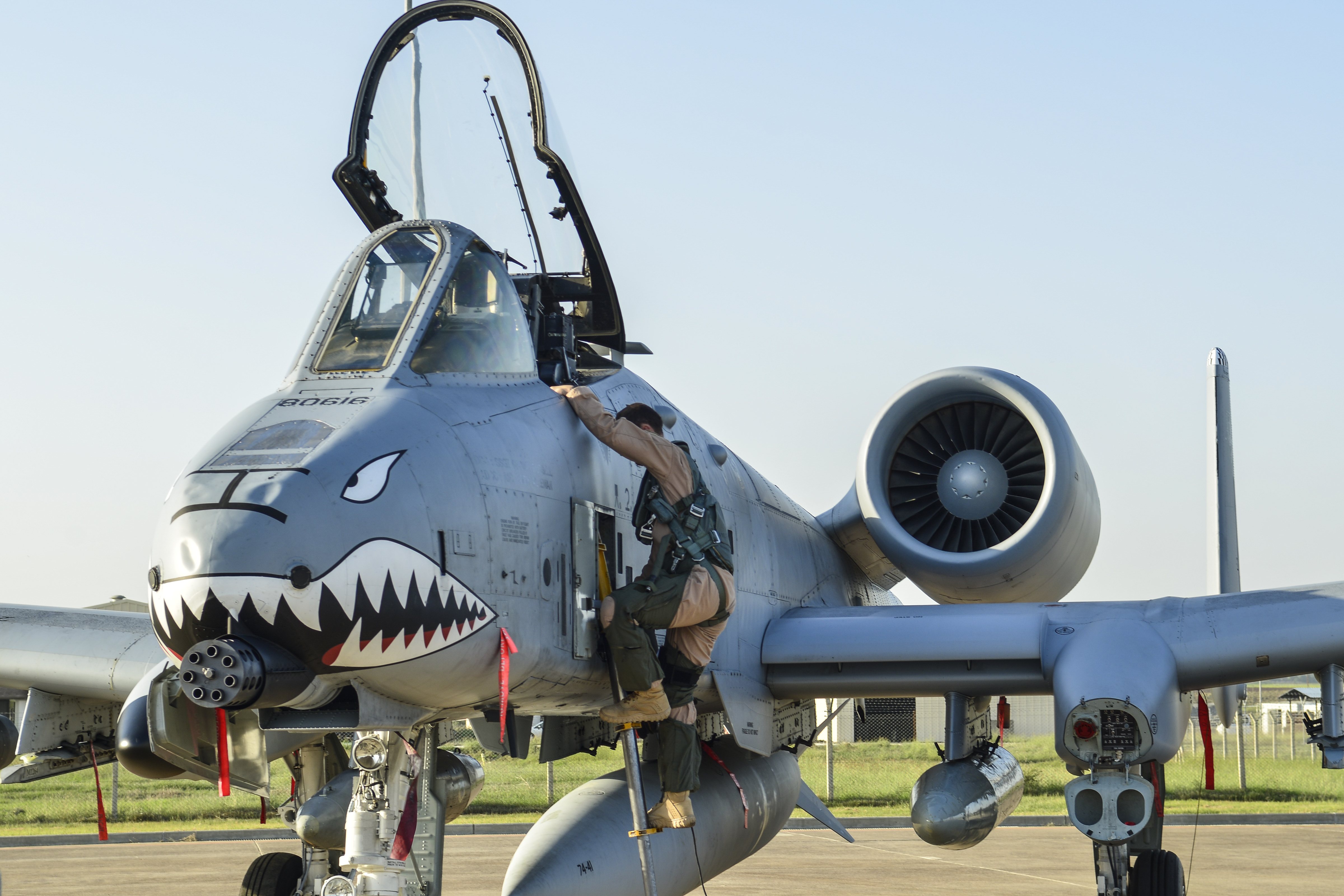 A U.S. Air Force pilot steps out of an A-10C Thunderbolt II shortly after arriving at Incirlik Air Base, Turkey on Oct. 15. The A-10s deployed to Incirlik as the U.S. increased its support for rebel groups in Syria.
Photo Credit: Airman 1st Class Cory Bush/Air Force

American airstrikes over Syria have intensified during the past week as the U.S. expands its operational ties to rebel groups fighting on the ground and deploys more warplanes to an air base in nearby Turkey, Defense Department officials say.

U.S. and coalition airstrikes on Islamic State group targets in Syria averaged about eight per day during the first week of November, roughly double the average number of daily strikes reported in October, DoD data shows.

"As we ramp up the pace of ground operations there with the forces we are supporting, we're going to see more targeting opportunities" in Syria, Navy Capt. Jeff Davis, a Pentagon spokesman, told reporters Monday.

No U.S. troops are on the ground in Syria to act as joint terminal attack controllers, or JTACs, but U.S. officials are getting intelligence from some rebel factions that are engaged in daily fighting with Islamic State group militants.

"We have a number [of] partners on the ground who … provide us with information," Davis said. "We take, and independently assess, that information and use that information in fulfilling our air-tasking orders and developing our targets."

This week, the U.S. is likely to send an additional six F-15Es to Turkey's Incirlik Air Base, he said.

That would bring the total number of U.S. combat aircraft stationed at Incirlik up to about 24 after last week's deployment of six F-15Cs and about a dozen A-10s that arrived in September.

The Early Bird Brief is a daily roundup of military and defense news stories from around the globe curated by Military Times and Defense News.

The U.S. is boosting its support for an alliance of rebel groups known as the Syrian Democratic Forces, which are estimated to number between 35,000 and 40,000 fighters on the ground, according to Air Force Col. Patrick Ryder, a spokesman for U.S. Central Command.

The uptick in airstrikes in November comes after a lull in October, when Russian fighter jets began operating in Syrian airspace and the frequency of U.S. strikes fell to its lowest level in months.

The U.S. opposes Russian involvement in Syria and Moscow's efforts to support the regime of embattled President Bashar Assad. The Russians are occasionally are striking Islamic State group targets, but they are also dropping bombs on rebel groups supported by the U.S.

On Oct. 20, the U.S. and Russia reached a basic agreement on safety protocols to reduce the likelihood of a mishap or misunderstanding. U.S. defense officials emphasize that there is no formal coordination of operations, but a line of communication has been created that can be used to defuse tensions, if needed.

"We are in contact with the Russians regularly to assure that we all understand the rules of the sky," said Army Col. Steve Warren, a U.S. military spokesman in Baghdad, told to reporters on Nov. 5.

Last week, the U.S. and Russian conducted a "radio check" involving American and Russian pilots meeting in the skies over southwestern Syria to establish communications on a designated frequency, Warren said.

Afterward, there was a phone call between a top U.S. officer on the ground and his Russian counterpart "to kind of go over what happened," Warren said.

"We're going to continue that because, as we've always said, safety of our forces is one of our primary concerns, and in this case, establishing these safety protocols is key and critical to ensuring the safety of our personnel," Warren said.

"But that's all it is," he added. "We are not conducting any type of coordination on strikes, we are certainly not running our strikes past them, we are not asking them permission to do anything. All we're doing is establishing an open line of communication to ensure that if there is a midair emergency or a midair encounter of some sort, that we've got established lines of communication to enable us to quickly mitigate that."

Governors call up the National Guard to battle coronavirus | Newsbreak

All 50 of the nation's governors have declared emergencies in their states and now many are starting to activate their Air and Army National Guard to help deal with the growing coronavirus pandemic.
Close
Now Playing

Artillery that shoots 40 miles, coronavirus updates, and a brawl in Guam | The Briefing 3.13.20