Team USA’s military athletes brought home two medals from the 2016 Summer Games in Rio with a bronze medal in the pole vault competition and a silver in the 5,000-meter race.

And both almost didn’t happen.

More than halfway through the two weeks of competition, Army 2nd Lt. Sam Kendricks was the first among a platoon of military Olympians to claim a spot on the podium with his bronze-medal finish in the men’s pole vault.

Kendricks jumped to an early lead with a first-place vault in the qualifier round. Air Force 1st Lt. Cale Simmons was eliminated in the same round, but Brazil’s Thiago Braz da Silva nailed a third-place finish.

Just as the media spotlight in Rio was turning Ryan Lochte’s out-the-pool antics, where the gold medal swimmer eventually apologized for "over exaggerating" booze-fueled claims he was robbed at gunpoint after vandalizing a Rio gas station, U.S. fans found something to be proud of in Hendricks’ performance.

In video that emerged a few days after the pole vault event, Kendricks is seen skidding to a stop mid-run,  just as the U.S. national anthem plays in the stadium where he was competing, and quickly dropping his pole so he can stand at attention during the honors. 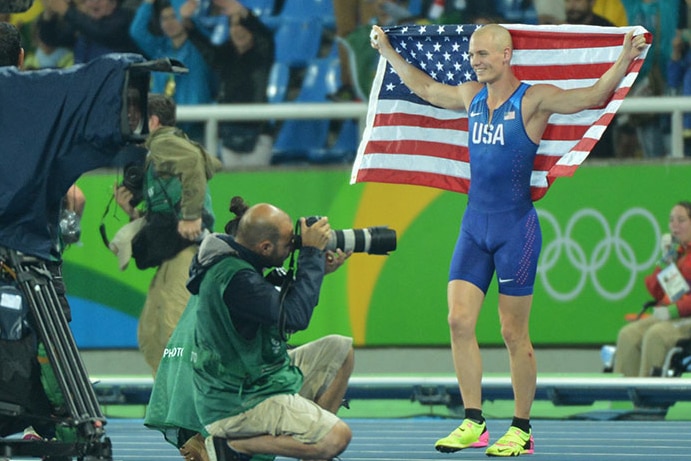 Army Reserve 2nd Lt. Sam Kendricks wins the bronze medal in the men's pole vault at the 2016 Olympic Games in Rio de Janeiro, Aug. 15, 2016.
Photo Credit: Tim Hipps/Army
Describing Kendricks as the "Anti-Lochte" sportsgrid.com wrote, "It may seem like a small thing — some may even say foolish — but man did we need that right now. After Lochte's shenanigans and subsequent interviews, out national image was hanging like it was attached by worn duct tape."

Kendricks’ star-spangled-stop didn’t hold back his Olympic dreams.  By the finals, however, Kendricks and Braz de Silva traded their first and third places, with the hometown hero taking gold with a 6.03-meter vault and new Olympic record and Kendricks stretching over the 5.85-meter notch to land his own medal-winning spot.

For Team USA’s much vaunted shooting squad, it was a few narrow misses — and a few wide — for the military marksmen on the team.

Instead, squeezing past Richmond was Kuwaiti army officer Fehaid Al-Deehani, who went on to win the double trap gold.

In his sixth trip to the Summer Games, Al-Deehani almost wasn’t allowed to complete. Kuwait's Olympic committee is currently suspended, accused of "undue government interference" by the International Olympic Committee.

In a last-minute concession just before the Rio Olympics, the IOC allowed Kuwait's athletes to participate as independents under the IOC flag. Six days before his gold medal win, Al-Deehani turned down a chance to carry that flag during opening ceremonies.

"I am a military man, and I will only carry the Kuwait flag," he told reporters.

"He's a good friend and very good guy. I knew it was going to take me a while to get through him if I could. I was confident that I could. Maybe I sped up just a little bit."

Richmond, who moved up eight places from his finish in the London Games four years ago, said he’s more committed than ever to keep zeroing in on his own berth atop the Olympic podium.

"Certainly a lot better feeling than London’s performance," Richmond said. "It’s not what you are after at the end of the day, but anytime you’re progressing in your sport, that’s a good thing. Overall, I couldn’t be happier with the experience I’ve gained here. Getting closer and closer to that medal is creating a bigger fire for me, and I look forward to trying out for another team."

The Early Bird Brief is a daily roundup of military and defense news stories from around the globe curated by Military Times and Defense News.

"It was frustrating. I didn’t shoot well here or in practice," Hancock said in a USA Shooting statement. "I felt really well down here, but it was just little things here and there that I can’t really pinpoint what they were. I felt that these were some of the hardest targets we’ve seen in quite some time."

Hancock had been determined to win a third gold medal.

"Pretty simple when you look at things. You just have to go out there and execute, and I just didn’t do that," he said.

Sanderson was just three points shy of the 583 points out of 600 he needed to make it into the finals.

Not bad, especially considering he’d been dealing with a trigger break after pre-event training.

Spc. Leonard Korir and Spc. Shadrack Kipchirchir were hoping to give him a run for his money.

Farah, who has won every global title on offer at this distance and is unbeaten over 25 laps of the track since 2011, took a tumble at halfway when an accidental clip from his sometime training partner Galen Rupp saw him sprawled out in Lane 2.

Despite the tumble, he still crossed the finish line for the win with 27:05.17 on the clock. Korir followed 30 seconds later for 14th place, with Kipchirchir taking 19th place.

Bor took eighth place in the finals, shaving more than two seconds off his personal best, crossing the finish line with 8:24.10 on the clock.

Three-time Olympian Staff Sgt. John Nunn finished 43rd in the 50K race walk, what is dubbed by some as the most grueling event in the Summer Games.

Naval Academy graduate Lt. Edward King made it to the finals in the men's four-man lightweight rowing event Aug. 11, ending with a sixth-place finish.

In the women’s 100-meter sprint, incoming U.S. Naval Academy freshman Regine Tugade finished in the top half of the pack running for Guam.

Finishing third in her semifinal heat with a time of 12:52, she told reporters, "I didn’t run my personal best, but I honestly felt like I ran my hardest, and I felt like I performed well. It may not show time-wise, but my body and my mentality feels like I pushed it to my limit."

Also competing for Guam, Naval Academy graduate and Navy veteran Peter Lombard was pulled out of the men’s mountain bike race on Aug. 21 after several hard falls in the first two laps on the rain-soaked course.

A cut and bruised Lombard told the Pacific Daily News, "I’m a bit disappointed. I definitely was riding the course better in practice, but the wet conditions changed a lot of things for me."

It was up to Kenyan-born Spc. Paul Chelimo to win the second medal for the crew of current and former military athletes.

Running in the 5,000-meter race, most thought he didn’t stand a chance.

Chelimo barely squeezed onto Team USA with a third-place finish in the track and field qualifiers in July. Once in Rio, it took winning his heat with a personal best to make it into the finals.

For the medal race, he’d also have to face off against Great Britain’s star athlete Farah. In the hotly contested race that featured plenty of jostling among the pack of athletes, Chelimo managed to find a new personal best, shaving 15 seconds off his previous race, crossing the finish line with 13:03.94 on the clock, just behind Farah.

Moments later, though, he was told by an on-the-field correspondent that he’d been disqualified for briefly stepping outside of his lane.

"Getting the news from the television reporter that I was disqualified, that was the most heartbreaking thing in my life," said Chelimo, a soldier in the U.S. Army World Class Athlete Program. A replay revealed Chelimo landed part of one foot just barely out of bounds amidst bumping among the runners.

"I was the guy inside in lane one, the guy inside behind Mo Farah," Chelimo said. "I couldn't stay there the whole time. I wanted to medal, too, so I had to look for position to get out and go into contention."

His disqualification was immediately appealed. Waiting for the ruling was the longest wait of his life, he said.

"Pushing and shoving is a part of the sport," Joyner-Kersee told reporters. "That's what you do, so I was glad to see our track and field federation was on it and got the protest in there. We prevailed, and I was glad to see him up on that podium."

Now Chelimo and Kendricks will join a roadshow of other Olympic athletes throughout the United States.

AP contributed to this report