By Susannah George, The Associated Press
Members of the Iraqi forces take position in Mosul's western Rifai neighbourhood on May 17, 2017, during an ongoing offensive to retake the area from Islamic State (IS) group fighters. Iraqi forces pound the Islamic State group in the last pockets it controls of its former bastion west Mosul after spokesmen said the jihadist group was "on the brink of total defeat". / AFP PHOTO / FADEL SENNA (Photo credit should read FADEL SENNA/AFP/Getty Images)

MOSUL, Iraq — Half a dozen units of Islamic State group fighters holed up in western Mosul began their morning radio checks at just after 4 a.m. It was still dark and Iraqi forces deployed a few blocks away were listening in as they prepared an advance on the city's al-Rifai neighborhood.

"We're seeing at least two squirters at the impact site," a member of the coalition force radioed back to the Iraqi troops in Australian-accented English, using a slang term for badly wounded ISIS fighters. Moments later the extremists were calling for doctors over their own radio network.

Over the next 12 hours, more than 10 coalition airstrikes hit al-Rifai's eastern edge. Most targeted small teams of two or three ISIS fighters manning sniper rifles or machine guns so Iraq's special forces units could advance on the ground.

Mortars are piled up on the floor inside a weapon factory belonging to the Islamic State group in western Mosul, Thursday, May 11, 2017. The factory was discovered by Iraqi Federal Police forces after they liberated the area.
Photo Credit: Bram Janssen/AP
Military operations like the one in al-Rifai this week are accelerating in Mosul as part of a drive to retake the handful of districts still under ISIS control before the holy month of Ramadan begins at the end of May. And despite recent allegations of increased civilian casualties, advances on the ground continue to be backed by heavy airstrikes and artillery.

Launched in mid-February, the fight for Mosul's western sector has been marked by some of the most difficult fighting and catastrophic destruction yet in Iraq's war against ISIS. The brutality of the operation was highlighted by a single incident just a month into the operation — a U.S. airstrike on March 17 that killed more than 100 people sheltering in a home, according to residents and other witnesses interviewed by The Associated Press.

By contrast, Mosul's eastern half was retaken in 100 days of fighting. While front lines stalled at times, the area was less densely populated, neighborhoods were more modern with wider streets allowing tanks and other armored vehicles greater freedom of movement and the area was never under siege, allowing many ISIS fighters to flee westward.

The March 17 incident sparked outrage in Iraq and beyond. The U.N. called on Iraq to conduct "an urgent review of tactics to ensure that the impact on civilians is reduced to an absolute minimum." 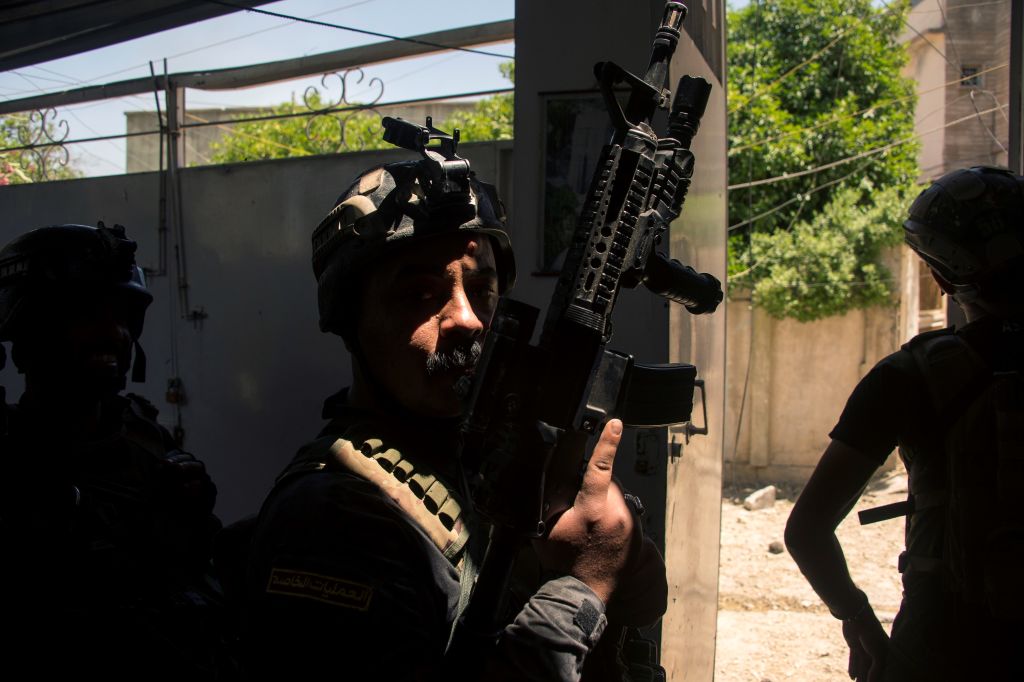 Members of the Iraqi forces take position in Mosul's western Rifai neighborhood on May 17, 2017, during an ongoing offensive to retake the area from Islamic State group fighters. Iraqi forces pound the Islamic State group in the last pockets it controls of its former bastion west Mosul after spokesmen said the jihadist group was 'on the brink of total defeat.'
Photo Credit: Fadel Senna/AFP via Getty Images
The Pentagon is still investigating the incident but Gen. Joseph Votel, head of U.S. Central Command, said the munitions used by the U.S. that day should not have taken the entire building down, suggesting that militants may have deliberately gathered civilians there and planted other explosives.

An Iraqi officer overseeing the Mosul operation said that after the March 17 strike, he received orders to no longer target buildings with munitions. Instead airstrikes were directed to the streets and gardens beside ISIS locations. But the order lasted only a few days. Now, as Iraq's army, special forces and militarized federal police push to clear the last vestiges of western Mosul held by ISIS, the volume of airstrikes is the same as when the mission to retake western Mosul first began, said the officer, who spoke on condition of anonymity in line with regulations.

A few blocks from the front-line advance, Faisa Muhammed, her children and grandchildren huddled Tuesday on the ground floor of their home. Car bombs, airstrikes and mortar attacks had already broken every window in their house. Their street had been declared liberated the day before but the fight was still so close that the force of nearby explosions filled their living room with dust and blew open the curtains they had pulled closed over the shattered window frames.

Muhammed said two airstrikes hit on either side of her home over the past week. One killed a single ISIS fighter in a neighboring garden and another killed a three-member sniper team on the roof of another house. 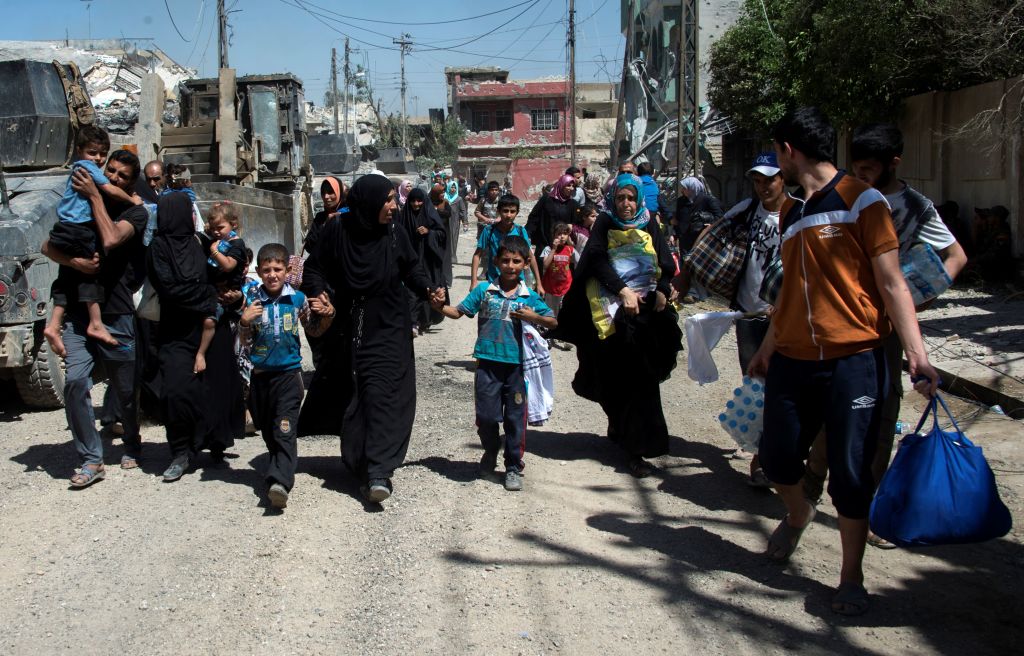 Iraqis leave their homes as members of the Iraqi forces take position in a neighborhood of west Mosul on May 17, 2017, during an ongoing offensive to retake the area from Islamic State group fighters.
Photo Credit: Fadel Senna/AFP via Getty Images

"If we hear only 10 explosions in a day, that's very little," she said as her grandchildren sat quietly even as the walls around them shook. When the whine of a mortar sounded overhead everyone mechanically plugged their ears with their fingers. Soldiers took cover in her garden when a nearby airstrike sent rubble raining down on the street outside.

"This has become normal for the children," Muhammed said.

Just over eight square kilometers (three square miles) of western Mosul remains under ISIS control, but within that area is the Old City — congested, densely populated terrain that is expected to present some of the most difficult fighting and greatest danger to civilians.

The renewed push to drive ISIS out of the remaining pockets still under its control was launched just over two weeks ago and since then Iraqi forces have retaken more than 30 square kilometers (12 square miles), according to the U.S.-led coalition, forcing thousands to flee. Some 500,000 people have fled western Mosul since February and the United Nations warned another 200,000 may be forced to flee as the operation continues.

Iraqi special forces Lt. Gen. Abdul-Wahab al-Saadi said he hopes to complete the Mosul operation before Ramadan begins around May 27 in order to get resources to the hundreds of thousands of civilians believed to be besieged in ISIS-held Mosul.

"It is very important to reach them very quickly," he said, adding that a victory before the holy month would "bring joy to the residents of Mosul and the troops."

There are no immediate plans to shoot it down, due to concerns about debris. But steps have been taken to prevent the collection of sensitive information.

Post-Global War on Terror, different missions for the National Guard