Recipients of the Military Times’ 18th annual Service Members of the Year awards were honored Wednesday night in Washington.

The event recognized one top service member from the Army, Navy, Air Force, Marine Corps and Coast Guard who have displayed exceptional commitment to service — both in and out of uniform.

Drawing a host of top Pentagon officials, lawmakers from Capitol Hill and leaders from military advocacy groups, the awards were given at the Andrew W. Mellon Auditorium on the National Mall, several blocks from the White House. It was hosted by a not-for-profit affiliate of the Military Times known as the Military Charity Organization.

Soldier of the Year

After being diagnosed with a brain tumor in 2017, Army Spc. Shayn Linquist fought cancer and continued to train with his Army unit. He is now cancer free.

During his treatment, he also founded a nonprofit organization that brings soldiers together to raise money for children battling cancer.

Lindquist dedicated his personal recovery time to raising money and awareness for St. Jude’s Children’s Research Hospital and Special Days Camp, where he is also a summer counselor for children with cancer. Lindquist said he hopes to earn a college degree and attend Officer Candidate School.

He credits his dedication to service and resilience to his stepdad, a former 82nd Airborne paratrooper.

“After my fight with cancer I finally got to airborne school too. I realized that all this hard work I’d put in to try to be healthy again, it paid off," Lindquist said. "My stepdad was the guy who came up and pinned his original Airborne wings on me from the ’90s.”

Marine of the Year

Marine Raider Master Sgt. Jarad Stout, the Marine of the Year, was deployed to West Africa in 2015 when he helped lead a quick and decisive response against al-Qaida militants who attacked the Radisson Blu Hotel in Mali, helping to rescue 150 hostages.

Stout, a native of Oklahoma, says service to his country is his most important calling and service before self is the primary driving force of his life.

“When you’ve chosen to serve, and you take on that mantle of responsibility, you have to wake up every day and say, what have I done today to be better and to earn this?” Stout said.

Sailor of the Year

Master Chief Raina Hockenberry, the Sailor of the Year, was honored for her strength of will and perseverance that brought her back to the active-duty fleet — despite what could have been a career-ending injury. After surviving an attack in Afghanistan, she says she chose to get back to work. Today, Hockenberry, personnel specialist, is continuing her career at sea aboard the guided-missile cruiser Port Royal.

In addition to serving in a sea billet, Hockenberry also competes in the Warrior Games.

“It’s a privilege to be here receiving the award on behalf of Chief Hockenberry, an absolutely amazing sailor who despite the odds, beat them and came through an amazingly difficult injury, recovered, and fought her way to get back to sea," said Navy Adm. Robert P. Burke, vice chief of naval operations, who accepted the award on behalf of Hockenberry who was unable to attend the event in Washington.

"She is doing just amazing things, leading sailors, mentoring them, and finding time to win eight gold medals at the Warrior Games. She’s just an inspiration to everybody that wears the uniform.”

Airman of the Year

Tech Sgt. Cody Smith, the Airman of the Year, was introduced by Ernst, R-Iowa, who honored his courageous actions in a 17-hour-long firefight that resulted in helping to save the lives of more than 130 Americans and Afghans. Smith and the close-air support strikes he provided helped bring his entire team of Army special operations soldiers home safely in 2018 despite the massive attack from 600 Taliban fighters. For that mission, Smith was nominated for Silver Star.

Smith preferred to direct his acceptance speech to his special tactics teammates, their dedication to the mission and the other honorees.

“I’d like to say thank you to my fellow award recipients and my sister service members," said Smith. “It’s an absolute honor to be mentioned in the same sentence as their names."

Coast Guardsmen of the Year

Boatswain’s Mate 1st Class Nathan Reynolds, the Coast Guardsman of the Year, was honored for his courageous service and lifetime waterman’s dedication to search and rescue missions. In the past few months alone, he has saved nine lives in the Chesapeake Bay.

“It’s about giving back and helping others when they need it,” said Reynolds. “It is a true honor to be here, and I wouldn’t be where I’m at right now if it wasn’t for the men and women of the Coast Guard, as well as the other military branches. There’s a lot of folks in this room that make the team come together. It doesn’t matter what branch of the service you’re in.”

Reynolds attributes his dedication to the Coast Guard in part to his father, who served as a Coast Guard senior chief boatswain’s mate.

Veteran of the Year

The Military Times Veteran of the Year award honors an exceptional veteran who makes a difference in their community, sets an example for others and raises awareness on military and veterans’ issues. Adam Keys is one of those veterans.

Keys is a former paratrooper whose mine-resistant, ambush-protected vehicle was hit with an improvised explosive device on his first deployment to Afghanistan in 2010. He was the lone survivor of the blast, but he lost three limbs and spent several years in recovery.

After Keys recovered from almost insurmountable injuries, he founded One Step Forward, a support network that assists other wounded veterans. He is a public speaker, mountain climber, marathoner and stand-up comedian.

When the triple amputee goes out on stage at comedy clubs, he sometimes starts out by saying: “Let’s just go ahead and address the elephant in the room. ... I’m a Canadian.”

Keys received his award from the 2018 Veteran of the Year Award recipient, former Marine combat engineer Rob Jones, who lost the bottom of both of his legs after an IED explosion in Afghanistan.

2019 Service Members of the Year 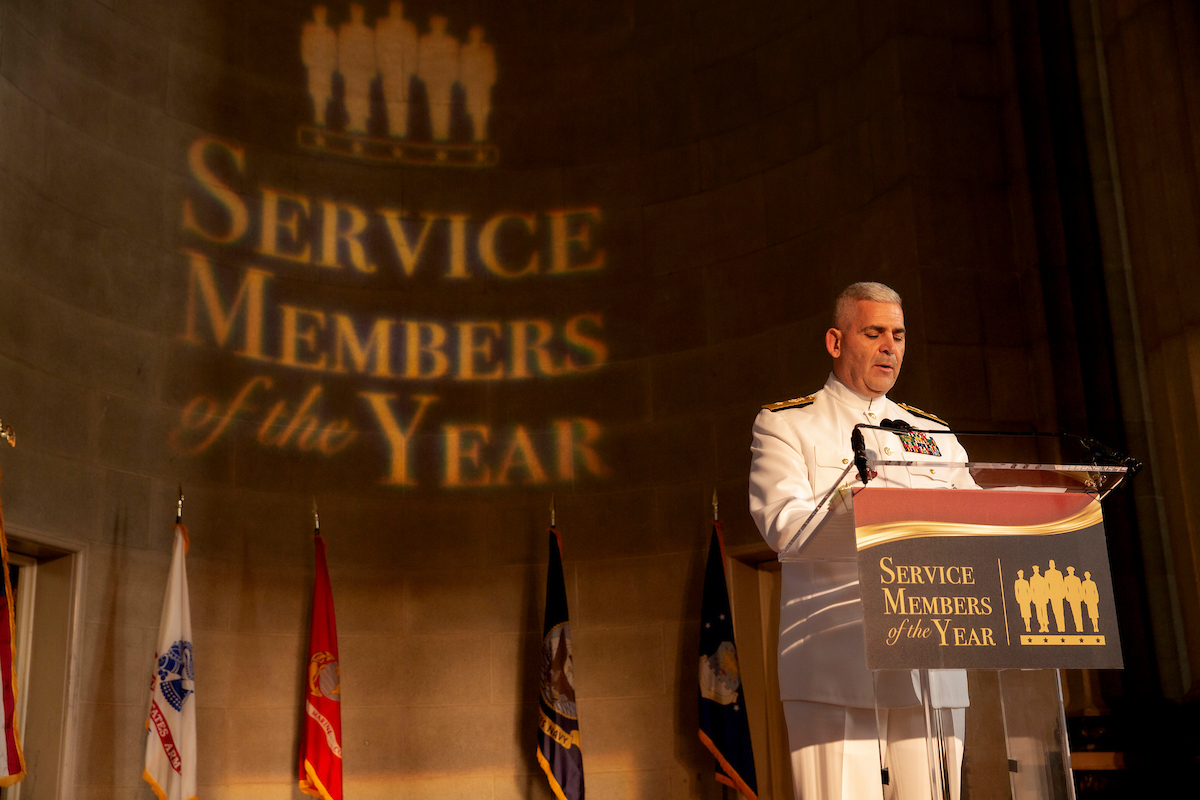 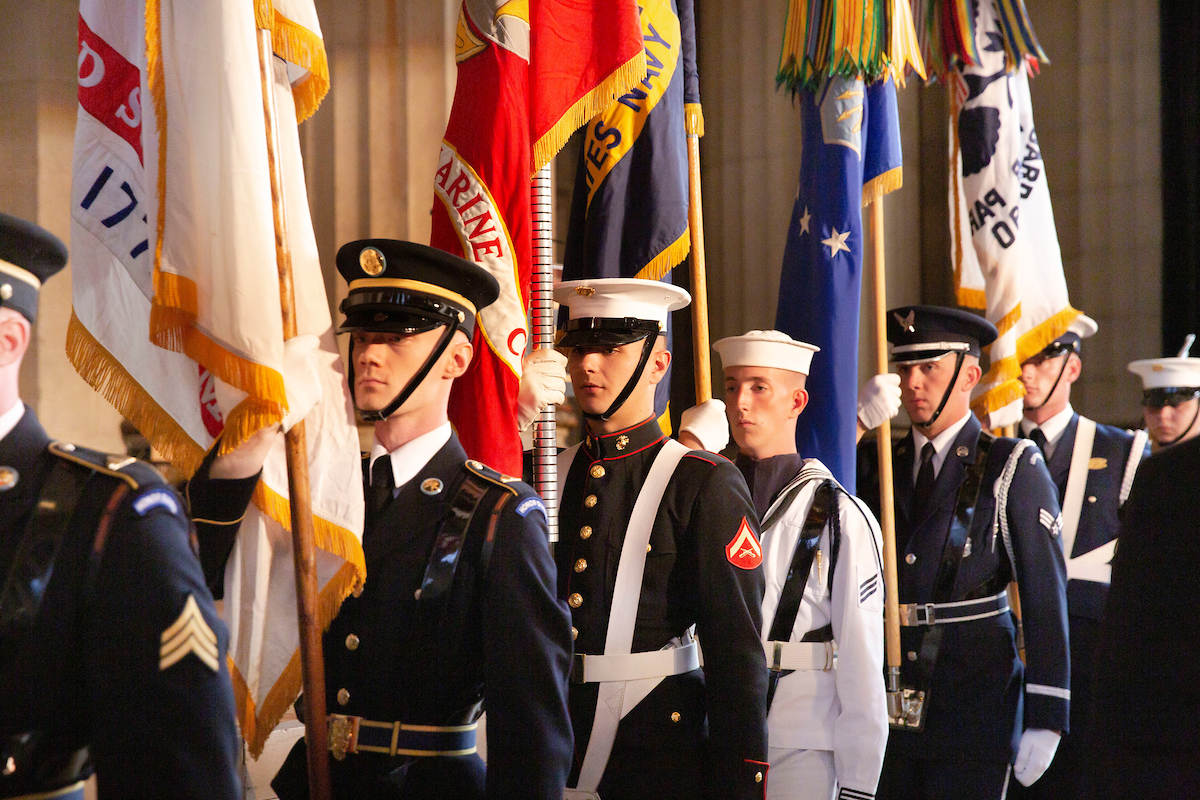 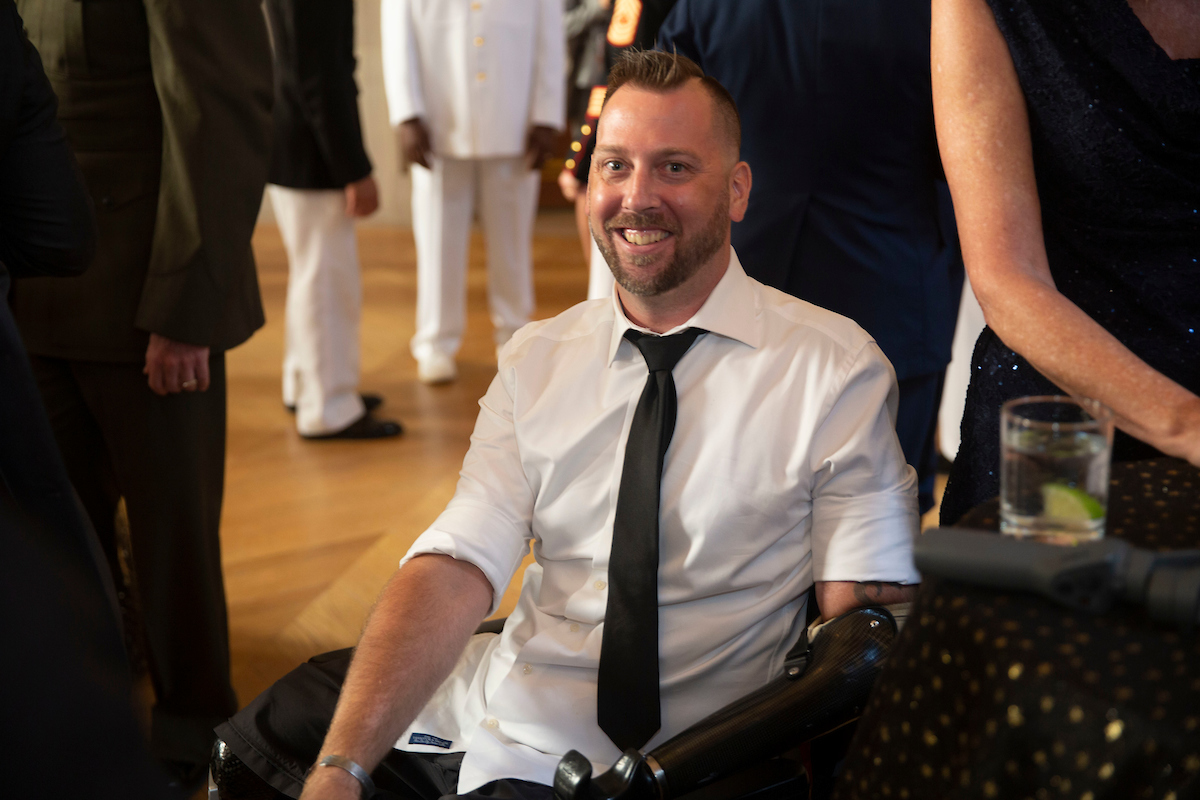 Veteran of the Year Adam Keys
4 of 7 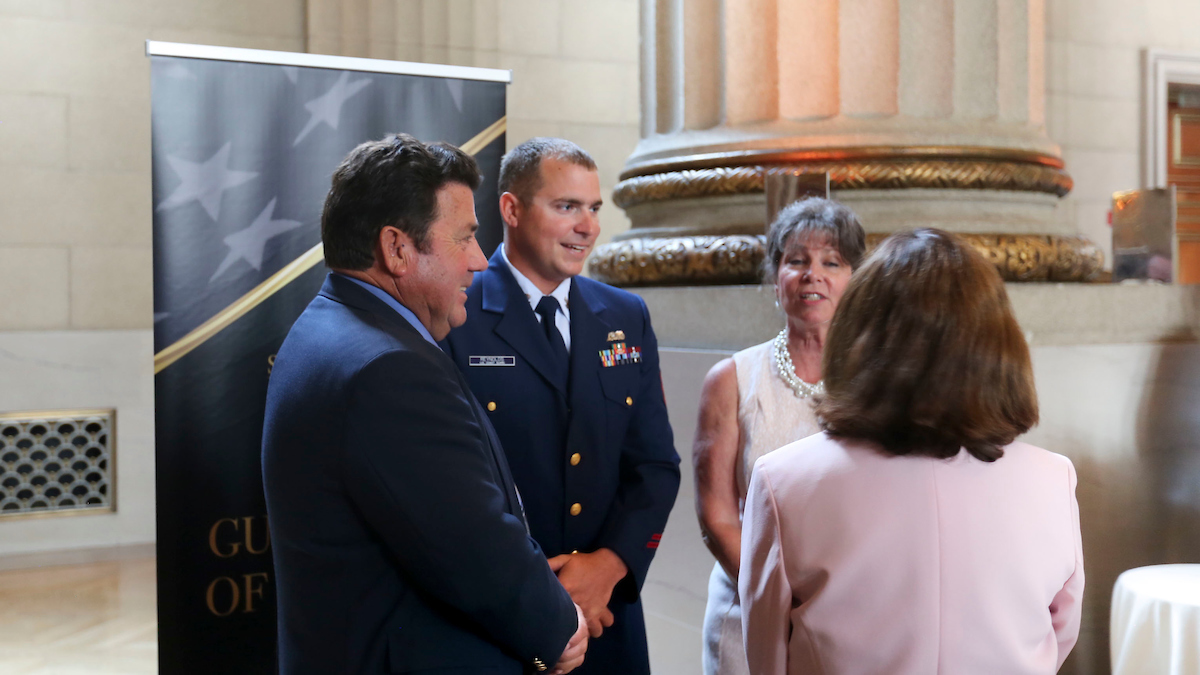 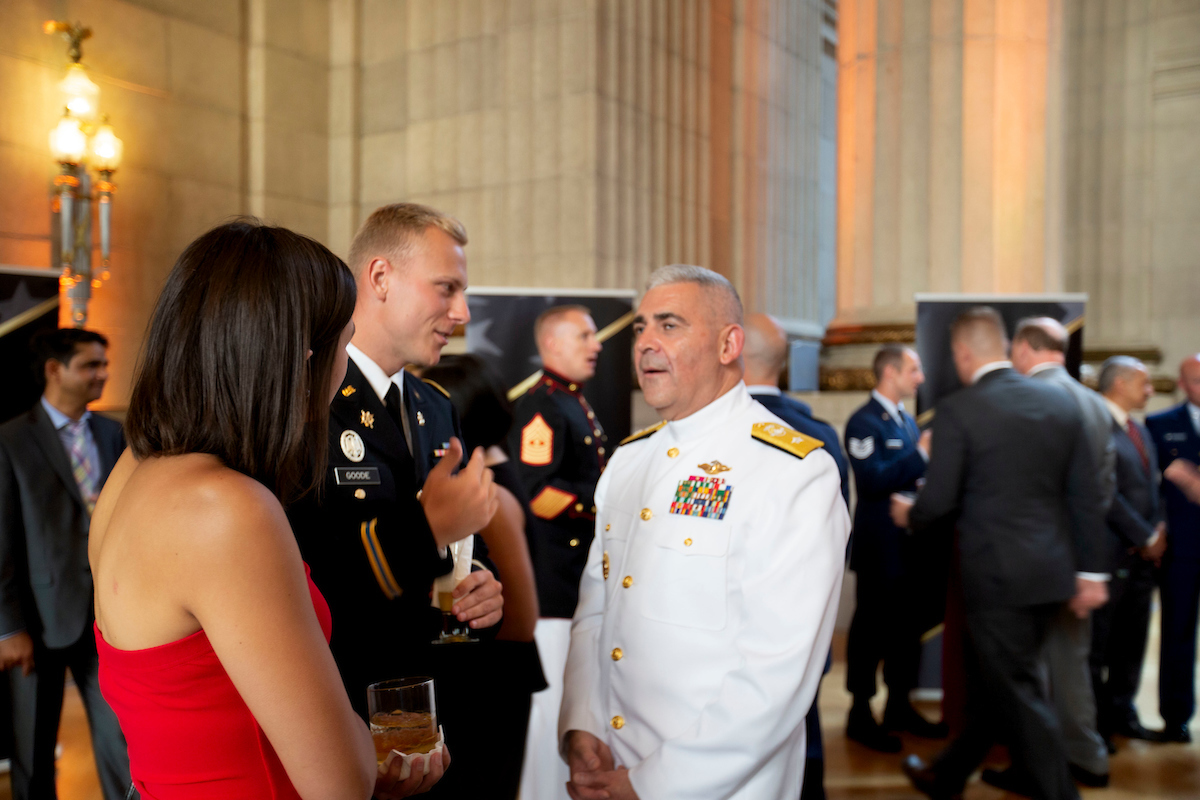 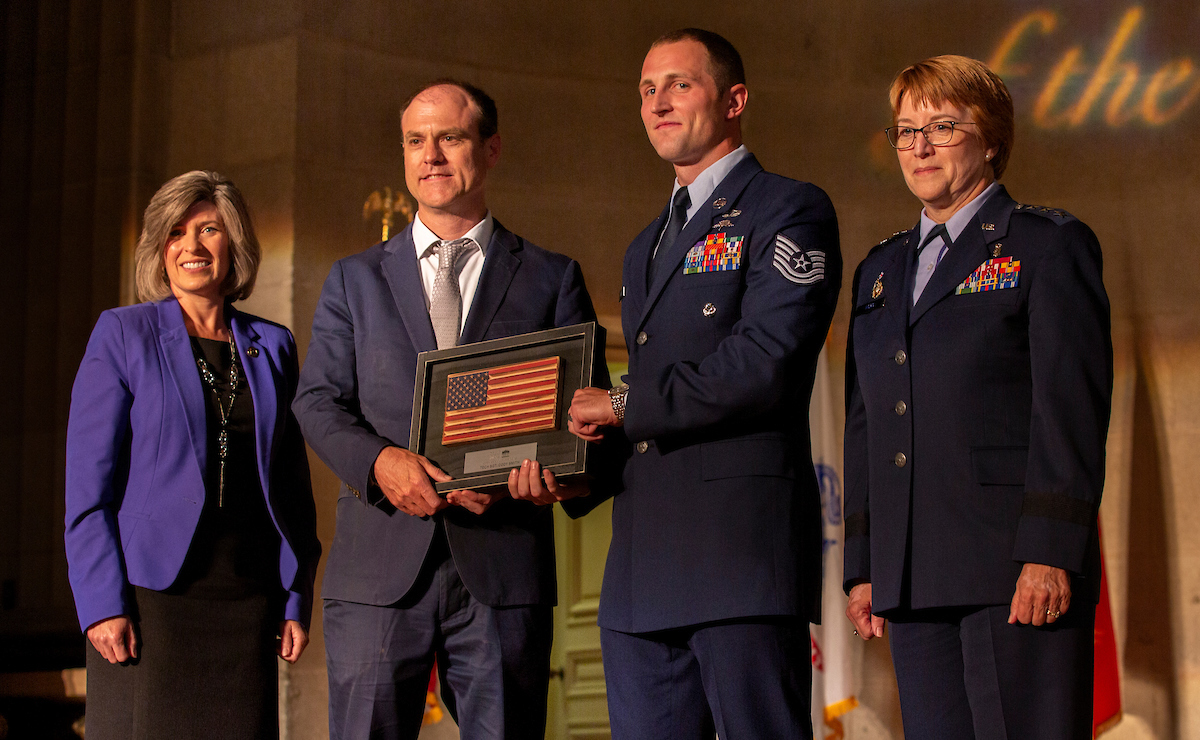 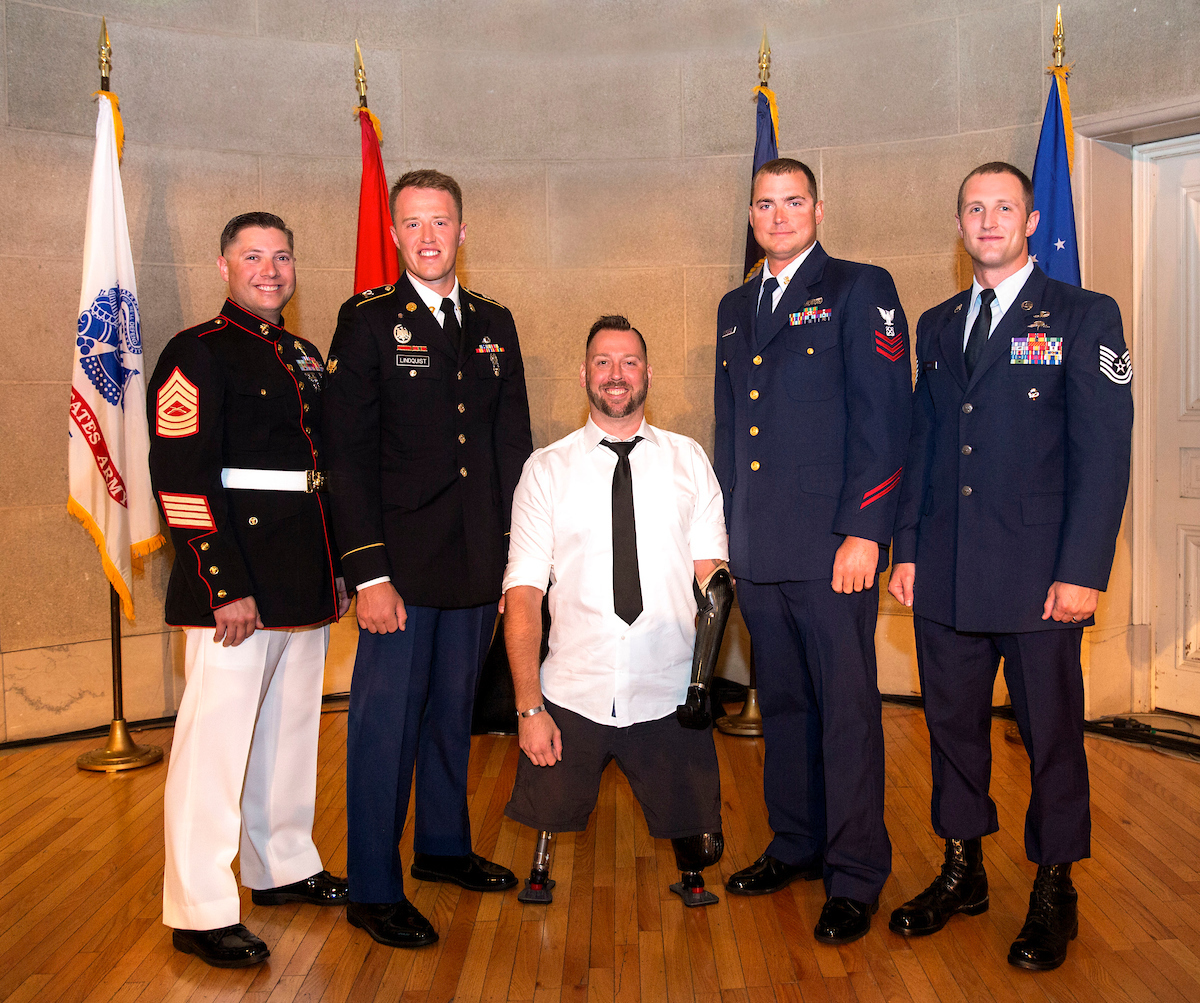 Patrick McKenna was awarded the Chairman’s Veteran Achievement Award for his service both as a soldier and as a civilian. "Service doesn’t end at separation,” is his personal mantra.

McKenna left the Army after four years, but took the leadership skills and values the military instilled in him into the entrepreneurial world. Throughout his many successful business ventures, McKenna has made a point to hire, mentor and invest in other veterans. Over the past ten years, he has employed more than 10,000 veterans and military spouses, he said.

“Many of the things that I learned in my military service define who I am today," said McKenna.

"The most important is to see the mission is bigger than yourself. When you meet other veterans in the business world, you immediately get connected. It’s such a powerful network, whether you were in a different branch or you’re in a different operational background. We always find some common ground. While my role as an active duty soldier may have ended, my service hasn’t stopped.”