Carter: More U.S. troops will not fix Iraq or Syria

By Robert Burns, The Associated Press

WASHINGTON — Sending thousands more American troops into Iraq or Syria in a bid to accelerate the defeat of the Islamic State group would push U.S. allies to the exits, create more anti-U.S. resistance and give up the U.S. military's key advantages, Defense Secretary Ash Carter said in an Associated Press interview.

Speaking from his Pentagon office overlooking the Potomac River on Wednesday, Carter said he favors looking for ways to speed up the counter-ISIS campaign, which administration critics including the president-elect, Donald Trump, have called slow-footed and overly cautious.

But he outlined numerous reasons why he believes strongly in the current approach of letting local Iraqi and Syrian forces set the pace.

"If we were to take over the war in Iraq and Syria entirely ourselves, first of all, in the near term it would be entirely by ourselves, because there is no one else volunteering to do that," he said. "We could get past that. But secondly, we would risk turning people who are currently inclined to resist ISIL" or to join ranks with the coalition, "potentially into resisting us, and that would increase the strength of the enemy." 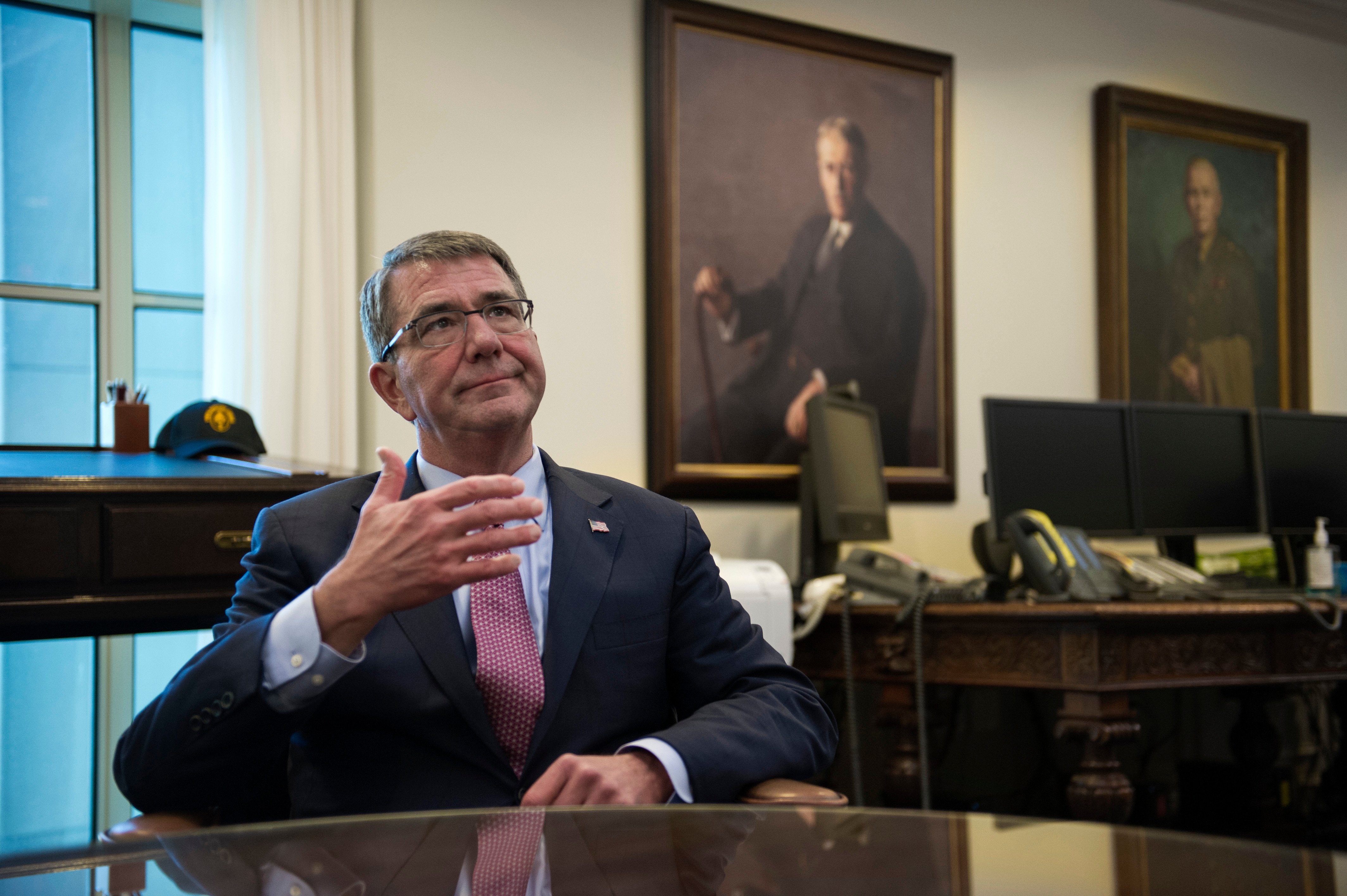 Secretary of Defense Ash Carter is interviewed in his Pentagon office, Wednesday, Jan. 18, 2017, in Washington. Carter said Wednesday he had opposed commuting the prison sentence of convicted leaker Chelsea Manning, who was convicted in 2013 of espionage and other crimes for leaking classified information while deployed in Iraq.
Photo Credit: Cliff Owen/AP

Taking over the war also would amount to "fighting on the enemy's terms, which is infantry fighting in towns in a foreign country," he said. While U.S. troops can do that, it would not leverage the U.S. military's biggest strengths, which are special operation forces, mobility, air power and intelligence-gathering technologies — "exquisite capabilities that no one else has," he said — to enable local troops to do the fighting and own the outcome.

So while he believes faster is better, "It's important that it be done in a way that victory sticks." That was a reference to avoiding a repeat of the disastrous events of 2014, when Islamic State militants swept into western and northern Iraq from Syria and grabbed control of large swaths of territory as the Iraqi army collapsed. The Obama administration was caught by surprise at the hollowness of the Iraqi army, weakened by political and ethnic strife.

The AP interview was Carter's last as defense secretary. His designated successor, retired Marine Gen. James Mattis, is expected to win easy Senate confirmation shortly after Trump is inaugurated on Friday. Carter will step down at noon on Friday.

At his confirmation hearing last week, Mattis gave only glimpses of his thinking on Iraq and Syria. When asked how his recommended way forward there would differ from the current approach, Mattis said, "You give it full resourcing to get there as rapidly as possible, and I think it's getting there as rapidly as possible is probably where it would differ from the current administration, where it would be a more accelerated campaign from what the president-elect has already called for."

Trump has not explained his plan for defeating the Islamic State militants but has sometimes suggested he would send more troops.

The U.S. war against the Islamic State group, which began in 2014, the year before Carter took office, became a major focus of his tenure, along with his efforts to modernize the Pentagon's approach to recruiting and maintaining talent. He has often said Obama was open to every suggestion for devoting more resources to the war, short of committing large numbers of combat troops.

But as increasing amounts of territory have been recaptured in both Iraq and Syria, and growing numbers of ISIL leaders have been taken off the battlefield, the amount of useful intelligence has grown, he said.

"Even if you kill a guy, you get his phone and you learn something about ISIL," he said, adding that as the military campaign achieves more successes, "more and more people come over and volunteer information; that creates yet more opportunities. So there's this virtuous circle, where the more you do, the more you have opportunity to do even more."

Carter dismissed the idea that Obama has dragged his feet in Iraq or Syria.

"Everything we have been able to identify that would accelerate the defeat of ISIL, we have done," he said. "We have not been, and we should not be, shy about asking for more" authority or resources from the president to push the military campaign harder. "I asked President Obama for more. I would encourage Jim Mattis, if he sees opportunities to accelerate, to ask for more."

The Pashaliman base located under the Vlora Bay was built in the 1950s when the Soviet Union brought 12 submarines.

The launches were North Korea’s 17th round of missile firings this year.

This week will be a decisive one for Ukraine’s prospects of holding the region — and Russia’s chances of seizing it.