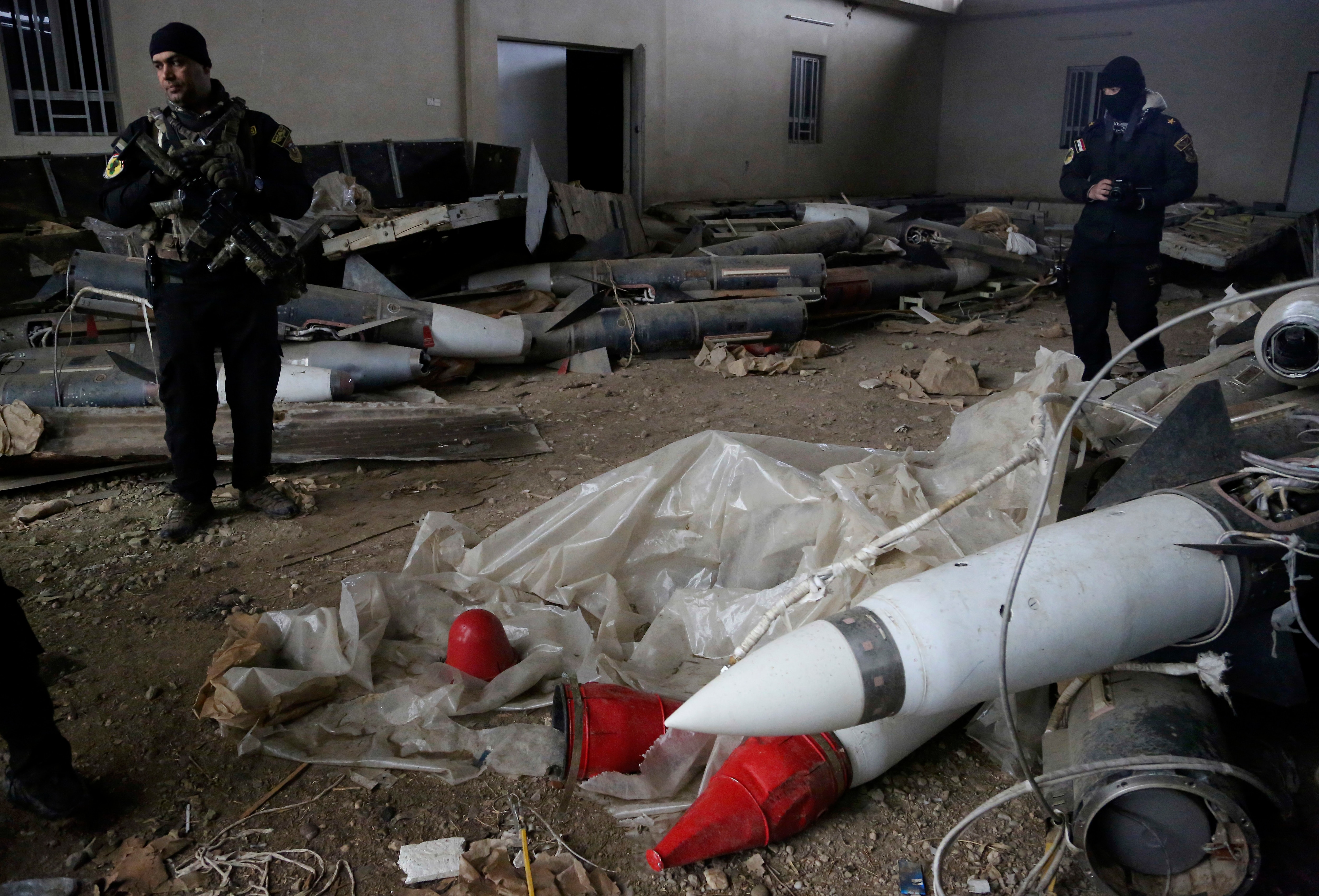 Iraq's special forces troops inspect missiles found in a warehouse in the eastern side of Mosul, Iraq, Saturday, Jan. 28, 2017. An Iraqi officer says Iraqi forces discovered a mustard chemical warfare agent in Mosul alongside a cache of Russian surface-to-surface missiles.
Photo Credit: null
Iraqi special forces Brig. Gen. Haider Fadhil said French officials tested the Mosul chemical this week and confirmed it was a mustard agent. Fadhil did not specify the quantity or potency of the chemical, but Iraqi soldiers were able to visit the site for about ten minutes without exhibiting any symptoms of exposure.

"We know that they were using this place to experiment with chemical weapons," he said, referring to IS.

Fadhil said he believes the facility was set up in the Nineveh ruins — an ancient site just over 2 kilometers (1.2 miles) from the Tigris, but removed from the city's dense neighborhoods — to keep it a secret from Mosul residents who might be passing information to Iraqi forces and the U.S.-led coalition. 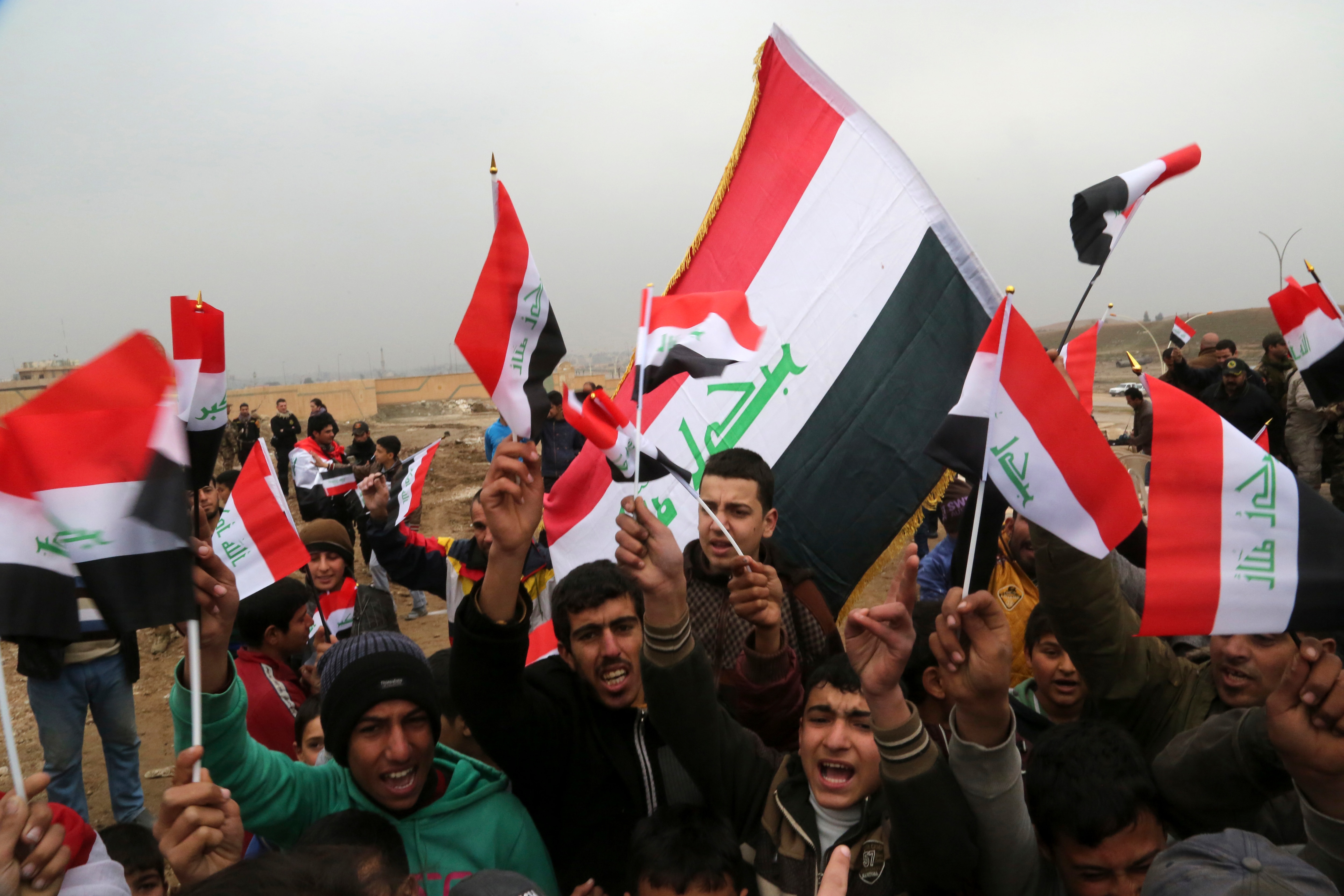 Civilians wave Iraqi flags during a military parade to celebrate the eastern side of Mosul being fully liberated from Islamic State militants, in Iraq, Friday, Jan. 27, 2017.
Photo Credit: null
Iraqi forces showed journalists a tank of the chemical agent and a warehouse of more than a dozen surface-to-surface rockets bearing Russian inscriptions.

The number of casualties due to ISIS chemical weapons is a small fraction compared to the hundreds of civilians killed in car and suicide bombings carried out by the group. Experts say that is largely due to the low grade of the weapons and the group's lack of access to efficient delivery systems.

The types of rockets found at the site suggest the Islamic State group was attempting to weaponize the chemical agent, Fadhil said. He added that he believed the facility was being used up until just one or two weeks ago.

Iraqi forces declared Mosul's eastern half fully liberated, just over three months after the operation to retake the city from IS was formally launched in October.

President Joe Biden said any Russian troop movements across Ukraine’s border would be an invasion and that Moscow would “pay a heavy price” for such an action.

Russia's Defense Ministry said the exercise will involve over 140 warships and more than 60 aircraft.

The extra costs are waived by most private insurers but not for members of the military.

The move could affect about 60,000 separating service members annually.

New Mexico is the first state in the nation to ask National Guard troops to serve as substitute teachers amid surging COVID-19 infections.

During the rollover 17 Marines were ejected from the back of the vehicle.

Airman gets life in prison for death of Mennonite woman

Authorities used cellphone and financial records, and surveillance video to tie Mark Gooch to the crimes.

A special office will review sexual assault charges, but there's no accountability for state leadership if they don't call them.

The hike in seizures comes amid increased patrols in the Gulf of Oman and the Arabian Sea.

Everyone wants to help military toxic exposure victims. Not all want to pay.

Lawmakers support the idea but face problems paying for the nearly $300 billion plan.