BEIRUT — Uncertainty and confusion surrounded the fate of the head of the Islamic State group Friday as Russia announced it may have killed him in an airstrike targeting a meeting of ISIS leaders just outside the group's self-declared capital in Syria, but U.S. officials said there was no definitive proof of his death.

The demise of Abu Bakr al-Baghdadi would be a severe blow to the extremist group as it fights to hang on to its strongholds in Syria and Iraq, although it was not clear how much operational control he retains over the organization whose capabilities keep evolving on the battlefield and beyond.

Apart from Moscow's claim that he may have been killed in the May 28 airstrike along with more than 300 militants, there was not much else to back it up. The Russian Defense Ministry said the information about his death was still "being verified through various channels." 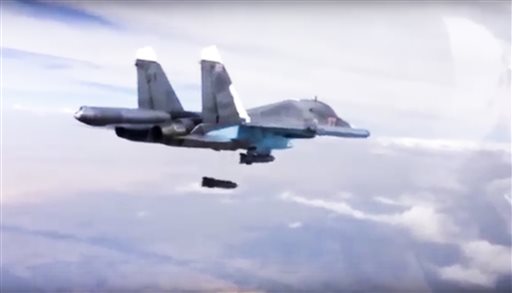 In this Dec. 9, 2015, file photo made from video footage provided by the Russian Defense Ministry, a Russian Su-34 bomber drops bombs on a target.
Photo Credit: Russian Defense Ministry Press Service via AP
Asked about that claim at a Moscow news conference, Russian Foreign Minister Sergey Lavrov said: "I don't have a 100 percent confirmation of the information."

A spokesman for the U.S.-led coalition fighting the Islamic State said he would welcome such news but urged caution.

"There have been several past claims of this kind that have been proven false, and we have seen no definitive proof that this report is true either," U.S. Army Col. Ryan Dillon said. Capt. Jeff Davis, a Pentagon spokesman, also said there was no information to corroborate the report.

Al-Baghdadi, believed to be in his mid-40s, last released an audio message Nov. 3, urging his followers to keep up the fight for Mosul as they defended the Iraqi city against a major offensive that had begun weeks earlier.

The latest report of his death comes amid major setbacks for IS, having lost significant territory on both sides of its so-called caliphate in Syria and Iraq. The group is fighting for survival in a few remaining neighborhoods in western Mosul and is now under attack in Raqqa, its self-styled capital.

The battle for Raqqa was launched a few days after al-Baghdadi's supposed killing, at a time when most of the group's commanders have relocated to Mayadeen, a remote town in the heart of Syria's IS-controlled, Euphrates River valley near the Iraqi border. The relocation could extend the group's ability to wreak havoc in the region and beyond for months to come.

On Monday, IS released an audio message from its chief spokesman, Abu al-Hassan al-Muhajer, urging supporters to carry out attacks in the United States and Europe during the Muslim holy month of Ramadan. There was no mention al-Baghdadi.

At the news conference, Lavrov noted that if al-Baghdadi's death is confirmed, its importance mustn't be overestimated. He said that "past examples of similar actions to strike the leadership of terrorist groups were presented with much enthusiasm and pomp, but the experience shows that those structures later regained their capability."

Still, the death of al-Baghdadi would be a major military and propaganda success for Russia, which has waged a military campaign in support of Syrian President Bashar Assad since September 2015. Moscow has a strong interest in showing that it is also fighting ISIS in Syria — something that has been questioned in the West.

That is partly why the news was met with skepticism.

"Russia has a long track record of issuing fake claims and deliberate misinformation during its campaign in Syria," said Charles Lister, a senior fellow at the Washington-based Middle East Institute.

He said the claims should be taken "with a heavy grain of salt," adding that "there's no logical reason imaginable" why al-Baghdadi would have risked staying in a surrounded, sitting target with U.S.-led forces only days away from launching their final assault on Raqqa.

The claim comes nearly three years to the day after al-Baghdadi declared himself the leader of ISIS from a historic mosque in Mosul, the largest city the group has ever held. Since then, it has horrified the world with mass killings and other atrocities in areas it controls, as well as claiming attacks around the world that killed hundreds.

Al-Baghdadi is a nom de guerre for a man identified as Ibrahim Awwad Ibrahim Ali al-Badri al-Samarrai. The U.S. has a $25 million bounty for information leading to his death or capture.

It is not clear who would succeed al-Baghdadi. The group has lost many of its top commanders in U.S.-led airstrikes, including Fadhil Ahmad al-Hayali, said by U.S. officials to be the second in command.

The group's current No. 2 is believed to be Ayad Abdul-Rahman al-Obeidi, also known as Abu Saleh Haifa, a former Iraqi army officer under Saddam Hussein. But according to Hisham al-Hashimi, an Iraqi expert on ISIS who advises the Iraqi government, he is not likely to succeed al-Baghdadi as "caliph," since that title is reserved for members of the Prophet Muhammed's Quraish tribe, according to some Muslim scholars. Al-Obeidi is not a member.

Al-Hashimi predicted that al-Baghdadi's death could splinter the organization into three groups: One will return to the mother al-Qaida group and form its arm in Iraq; another will join al-Qaida's branch in Syria known as Fatah al-Sham Front; and the third group, which is the weakest, will remain loyal to al-Baghdadi's ideology.

The May 28 air raid targeted an ISIS meeting in Raqqa's southern outskirts and killed about 30 midlevel militant leaders and about 300 other guards, the Russian Defense Ministry said.

It said the ISIS leaders were discussing the group's withdrawal from Raqqa, with the military planning the airstrike after hearing that the leadership would be meeting.

Drones were sent to monitor the area, followed by Su-34 bombers and Su-35 fighter jets to carry out the attack, the ministry said.

"According to the information that is being verified through various channels, ISIS leader Abu Bakr al-Baghdadi also attended the meeting and was killed in the airstrike," the military said in a statement.

The Defense Ministry added that it had warned the U.S. of the coming strike.

Syrian opposition activists reported airstrikes May 28 south of Raqqa that killed more than a dozen people.

The Britain-based Syrian Observatory for Human Rights, which tracks Syria's war, said airstrikes on the road linked the villages of Ratla and Kasrat killed 18 people, while the activist-operated group Raqqa is Being Slaughtered Silently said 17 civilians were killed in the airstrike on buses carrying civilians.