Tensions rise between Iraqi forces and civilians in Mosul

By Susannah George, The Associated Press

MOSUL, Iraq — "Don't stop!" the Iraqi special forces lieutenant yelled as a wave of fleeing civilians trudged past his position in Mosul's Old City in the scorching heat. "Don't pretend you're tired! Keep going!" Nearby, dozens of women and children, their hands raised, dropped their bags for security forces to search. Keeping the crowd at a distance, the soldiers yelled at the women to roll up their sleeves and empty everything they were carrying.

"We know you're Daesh," the soldiers said, using the Arabic acronym for the Islamic State group.

Tensions have escalated in the final days of the battle for Mosul, as suicide bombings carried out mostly by women hiding among groups of civilians target Iraqi forces closing in on the last few hundred square meters (yards) of territory ISIS controls. At least one such attack struck Wednesday.

At a screening center, security forces detained boys as young as 14 they accused of belonging to ISIS and barred the elderly and sick from stopping to rest during the difficult journey out of the war-torn district, a more than kilometer-long (half-mile) trek on foot over mounds of rubble in 115-degree (47-degree Celsius) heat. 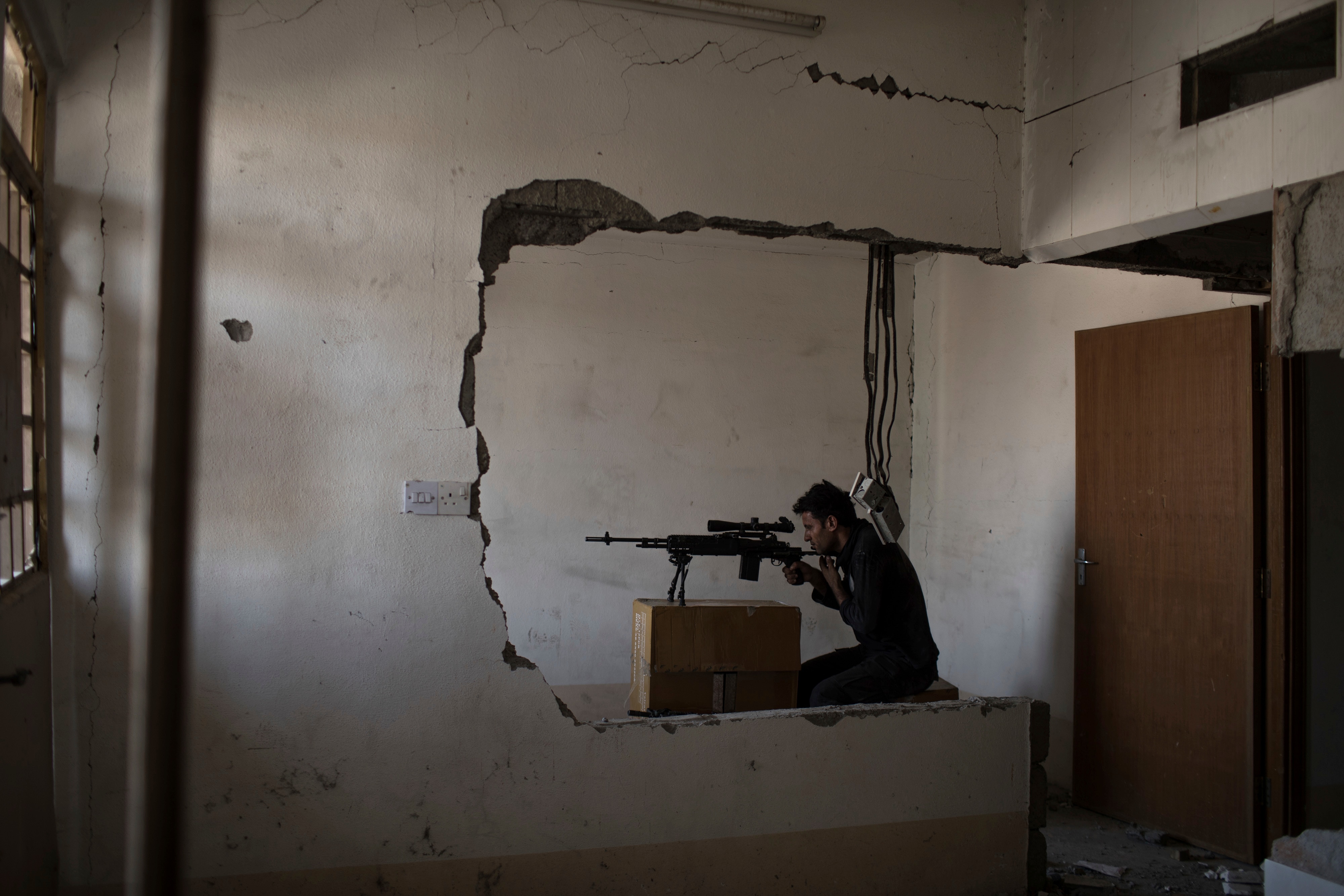 Many civilians are believed still trapped in the ISIS-run enclave, with around 1,500 fleeing with every 100-meter (yard) advance by Iraqi forces. Those emerging from the Old City at this late stage in the fight were weak, injured, gaunt and pale. For months, the district has been bombarded by Iraqi artillery and cut off from food and water.

The fight for Mosul is taking a "devastating" toll on the Old City's residents, Doctors Without Borders said in a statement Wednesday. Only a "fraction ... who require medical attention are receiving it, and many are dying on the battlefield," the humanitarian organization warned.

One man with a fractured leg was carried out Wednesday by a relative, surgical metal pins protruding through the white bandages. A small girl, her head wrapped in gauze, walked past the soldiers holding her mother's hand. Another man approached on crutches, his right leg missing below the knee, the stump bandaged.

An elderly man, stripped down to his underwear, staggered toward the soldiers.

"I recognize him from the Daesh propaganda videos!" special forces Lt. Fadhel Hadad yelled as two soldiers grabbed the man and sat him on the side of the road. Hadad began questioning him, but the man made motions that he was unable to speak.

"Don't pretend you are too tired to speak. Give him water and he'll speak," Hadad said.

Iraqi soldiers increasingly accuse civilians still inside the Old City of being relatives of ISIS fighters. Some 300 militants are estimated to be inside a 500-square-meter (600-square-yard) sliver of territory.

"We know they are all Daesh families, but what do we do, kill them all?" said a special forces solider, Amar Tabal, stationed deeper inside the Old City. 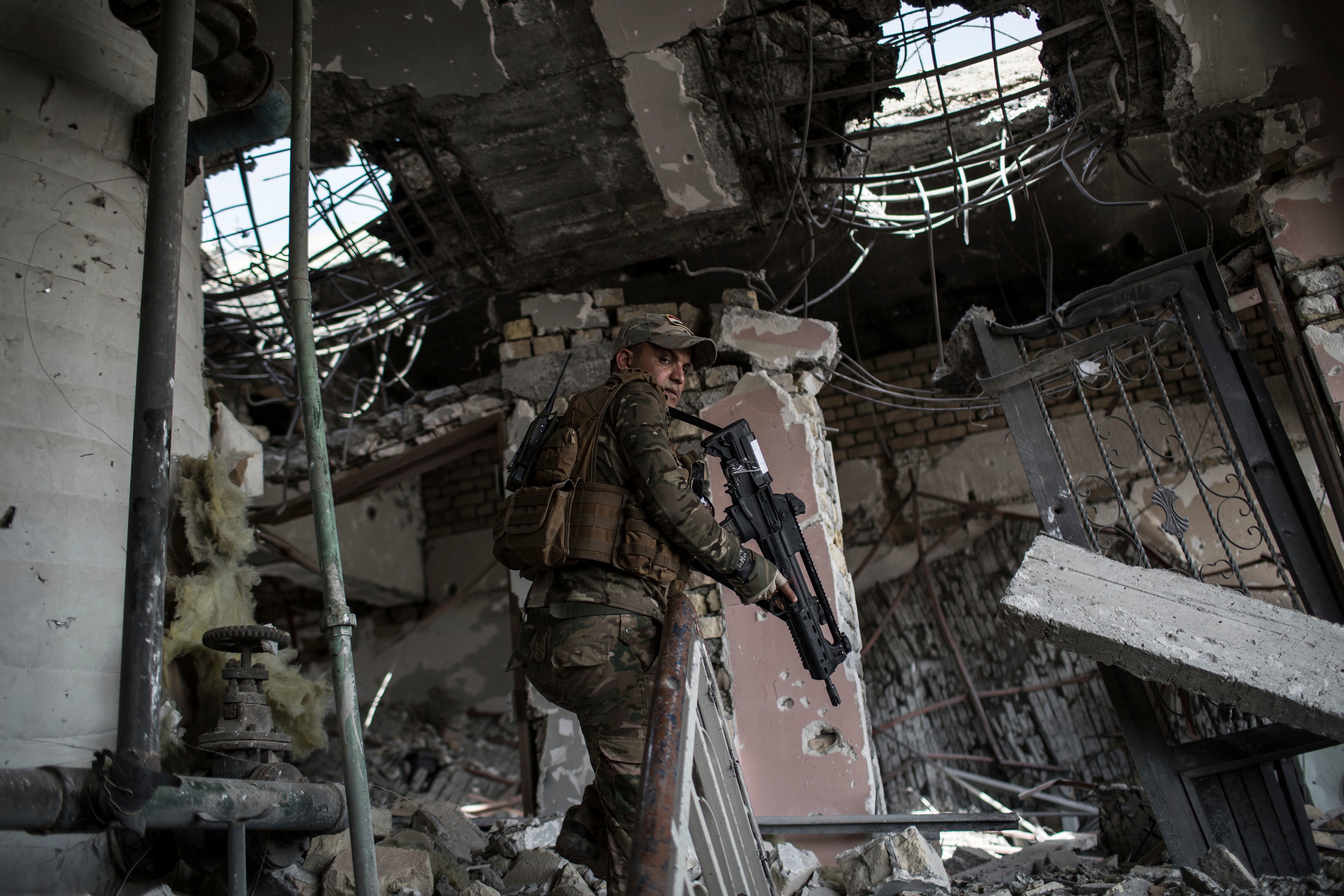 A Federal Police Rapid Response Force fighter walks inside a building at Mosul's main hospital complex after it was retaken by Iraqi forces during fighting against Islamic State militants, in Mosul, Iraq, Tuesday, July 4, 2017.
Photo Credit: Felipe Dana/AP
Women and children who aren't found to be carrying weapons are allowed to pass. Men and boys go through a much more stringent process: Their identity cards are checked and those with documents not issued in Mosul or whose name appears on a database are held for further questioning.

Lt. Gen. Abdul-Ghani al-Asadi, a senior special forces commander, defended the screening procedures. He described the ISIS suicide bombings as "barbaric" and maintained that searching and questioning civilians is essential to protecting his forces and preventing ISIS fighters from escaping Mosul. 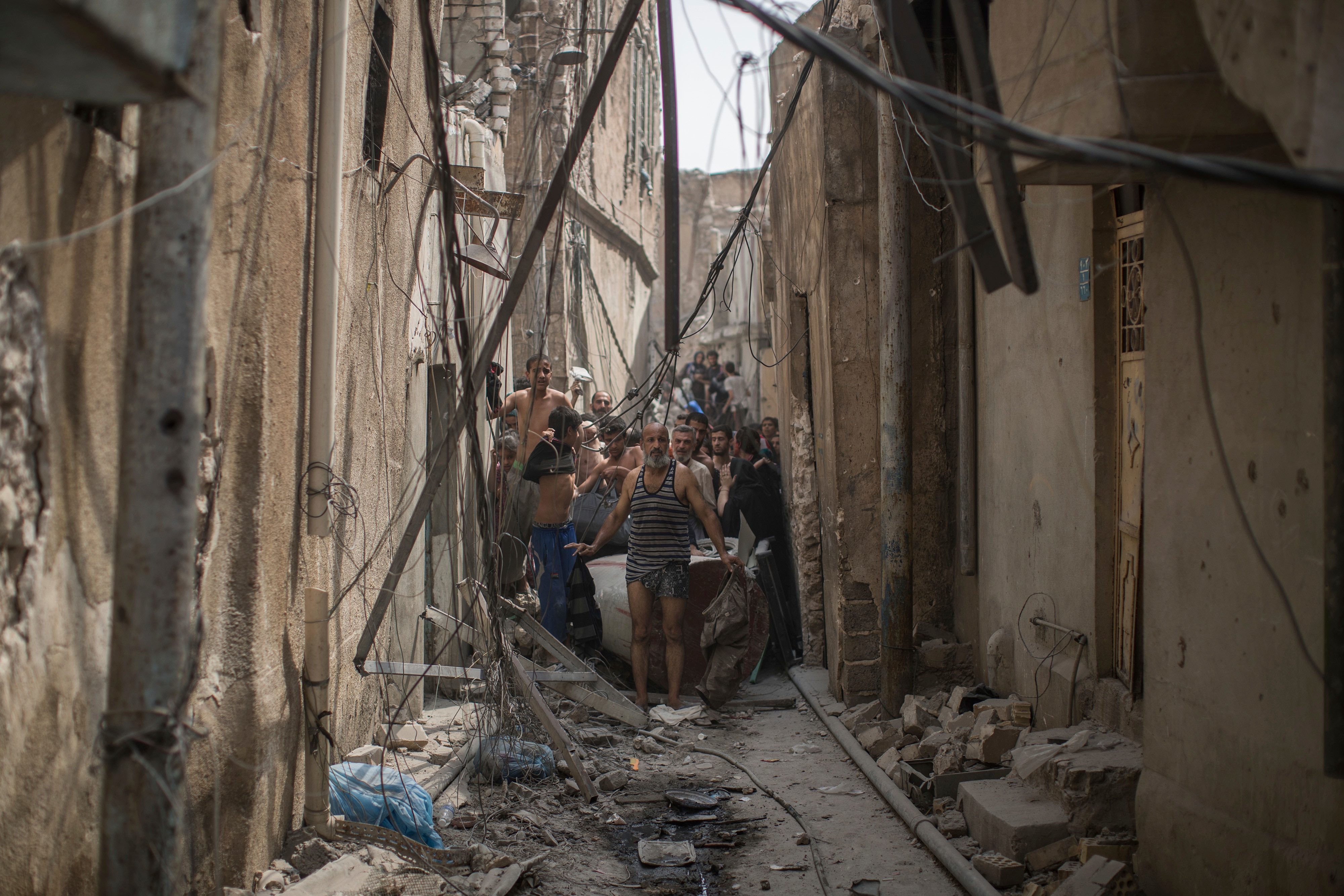 Civilians trying to flee get undressed to be checked for explosives after suicide bombers exploded as Iraqi forces continue their advance against Islamic State militants in the Old City of Mosul, Iraq, Monday, July 3, 2017.
Photo Credit: Felipe Dana/AP
"These are not children. They are cubs of the caliphate," Hadad, the officer at the Old City checkpoint said, gesturing to a group of young boys being held in custody. Another solider kicked a man into the back of a Humvee and began binding the detainees' hands with plastic zip-ties.

A group of women in black hijabs covered in dust said they had been traveling for about an hour and had been checked at gunpoint three times.

"They suspect we are all Daesh families, but we aren't," said Ruqaya Mahmoud, 24, who said she was originally from the Old City.

ISIS captured Mosul in a matter of days in the summer of 2014. Iraqi forces backed by a U.S.-led coalition launched a major operation to retake the city in October. In January the city's east was declared liberated and the push on the Old City — the last stand for ISIS in Mosul — was launched in June.

As civilians continued to flee Wednesday, one woman rushed up to Hadad and a group of soldiers standing outside a Humvee with three young men inside.

"My son! Please let me wait for him, he didn't do anything," Nowal Abdel Assad begged.

"Get out of here!" Hadad yelled, "He will follow you."

Sobbing, the woman said: "I don't know why (the security forces) are doing this. My son had nothing to do with Daesh."

A general officer will make recommendations about changes to targeting procedures or discipline for those involved.

Cpl. Humberto Sanchez died in the Aug. 26 attack in Kabul, where he had been transferred after serving as a U.S. embassy guard in Jordan.

The North was closely examining the deal and would proceed accordingly if it has “even a little adverse impact on the security of our country.”

‘It was a mistake.’ CENTCOM admits Aug. 29 drone strike killed civilians, not ISIS