Over there, but still here: The WWI innovations that live on

By Chris Carola, The Associated Press
American troops carrying guns climb over a sandbag revetment in France during World War I in 1918. (AP Photo)

Thursday marks the 100th anniversary of the U.S. entry into World War I, and some of the innovations that were developed or came into wide use during the conflict are still with us today.

America entered nearly three years after the war began, joining Britain, France and Russia in the fight against Germany and the Austro-Hungarian Empire. When it ended on Nov. 11, 1918, more than 4.7 million Americans had served and some 115,000 died.

The world's first mechanized war introduced enhanced weaponry and equipment, most of it designed to take lives but some of it aimed at saving lives. A look at some of the things that were new to the doughboys that we take for granted today: 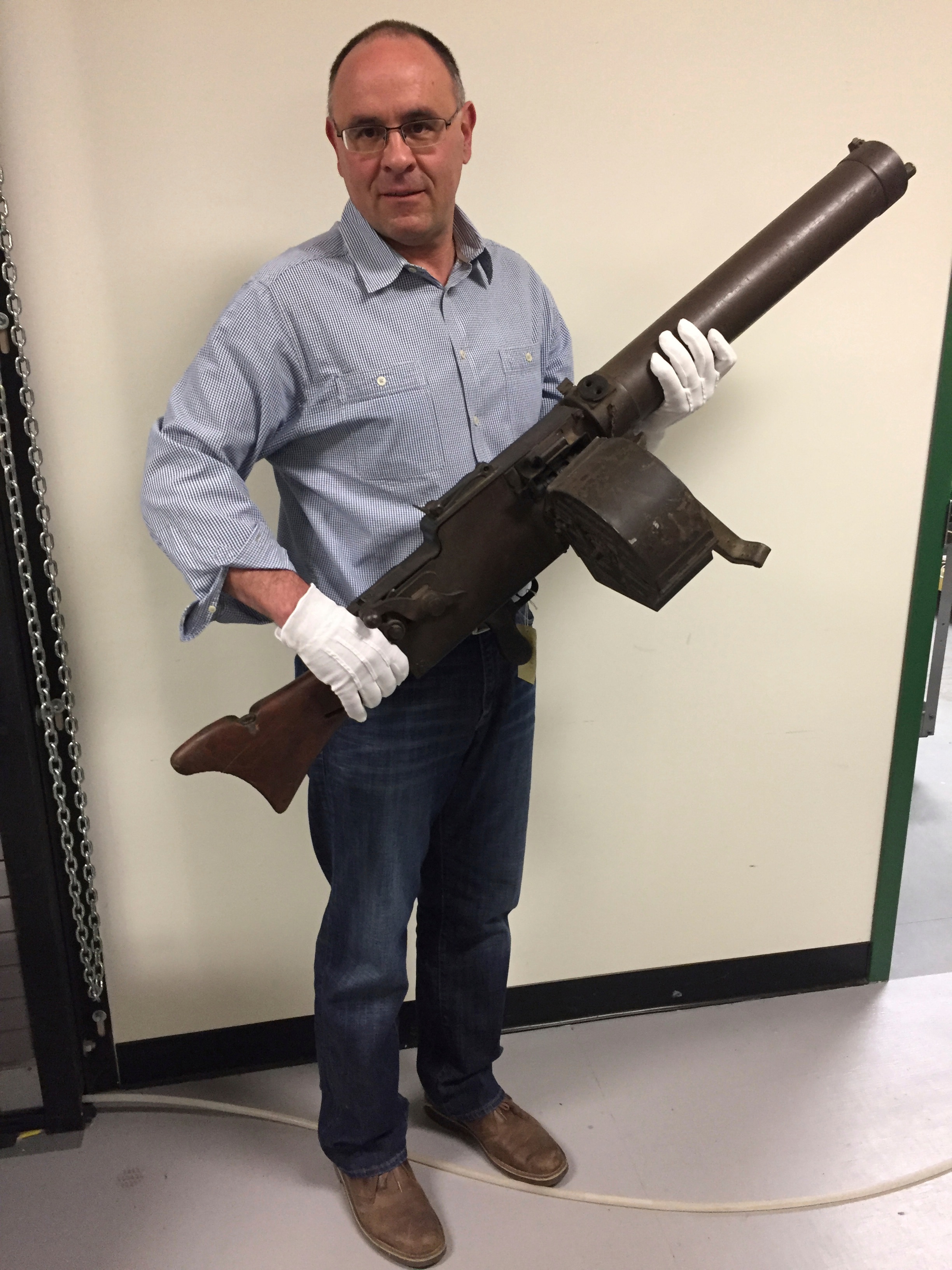 Hand-cranked, high-capacity, rapid-firing firearms had been used as far back as the Civil War. But it was American inventor Hiram Maxim's 1880s design for a single-barrel, portable machine gun and other later versions that became ubiquitous on both sides during World War I. It forced opposing forces to dig hundreds of miles of trenches, with a deadly "no man's land" in between where soldiers could get mowed down.

This kind of fighting was unfamiliar to most American forces, who had been trained in the tactics of mobile warfare, always advancing. "Then it becomes, 'How do we get out of the trenches?'" said Maj. Kyle Hatzinger, a history instructor at the U.S. Military Academy at West Point. "The Americans by 1917 have to figure this out."

One way to break out of the trenches along the Western Front was to bust through with newly developed armored tracked vehicles dubbed tanks. The British introduced a large number of tanks to the battlefield for the first time in September 1916, during the battle of the Somme. Other armies soon were developing their own versions. In September 1918, a 32-year-old Army lieutenant colonel named George Patton led a U.S. tank unit into battle for the first time. A quarter century later, during World War II, he was the most famous commander of American armored units. 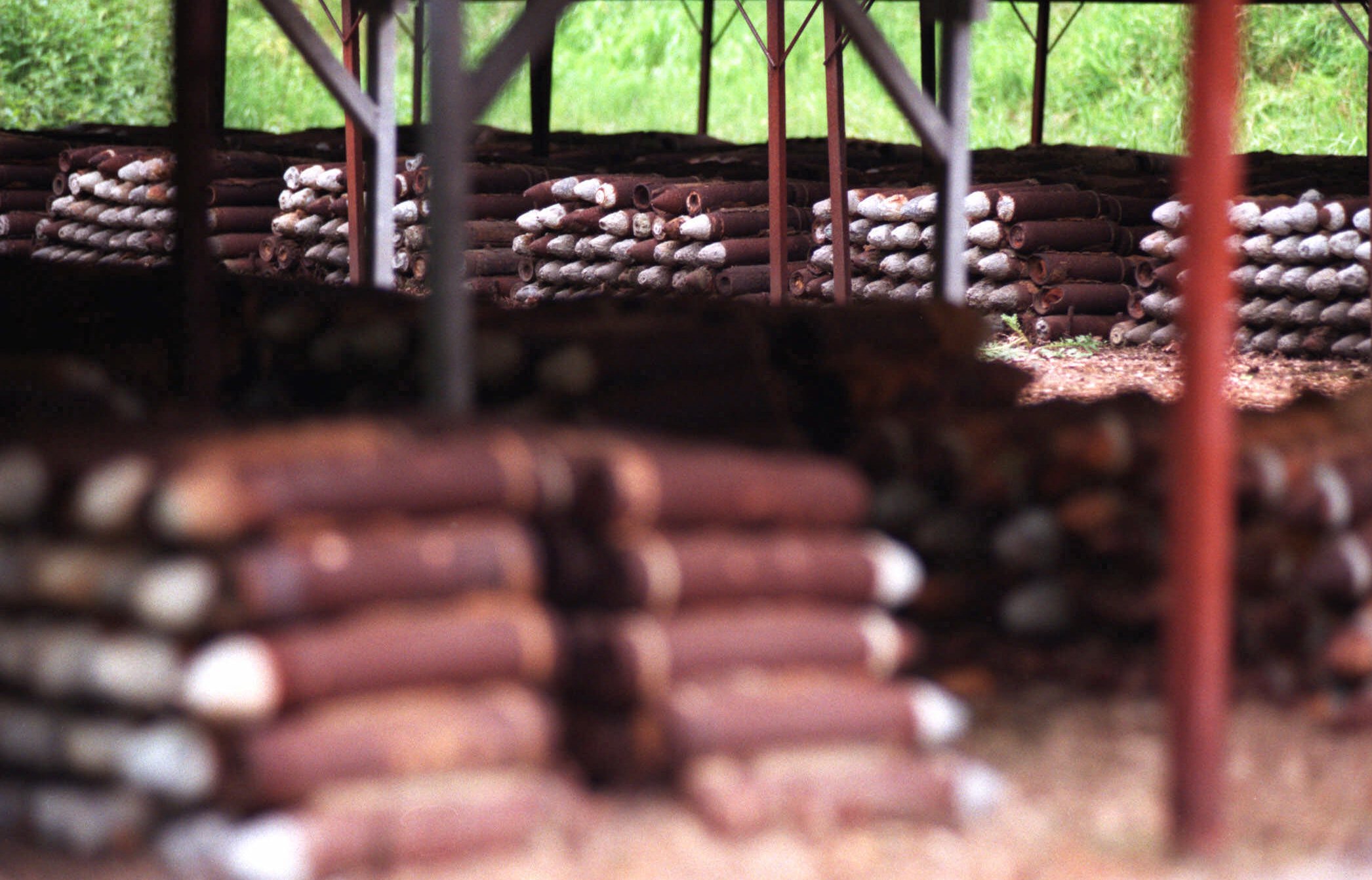 Germany launched the first use of a chemical weapon, chlorine gas, at Ypres, Belgium, in April 1915, against French troops. By 1917 other chemicals, including mustard gas, were being used by both sides. Some estimates put the number of deaths from gas attacks at about 900,000, with another 1 million injured. Gas masks were developed. But using gas could result in friendly fire casualties when winds blew the toxic fumes back into the attackers' positions.

"And if you attack you now have to go through the gas cloud you've created," Hatzinger said. "There's a lot of trial and error with the technology." 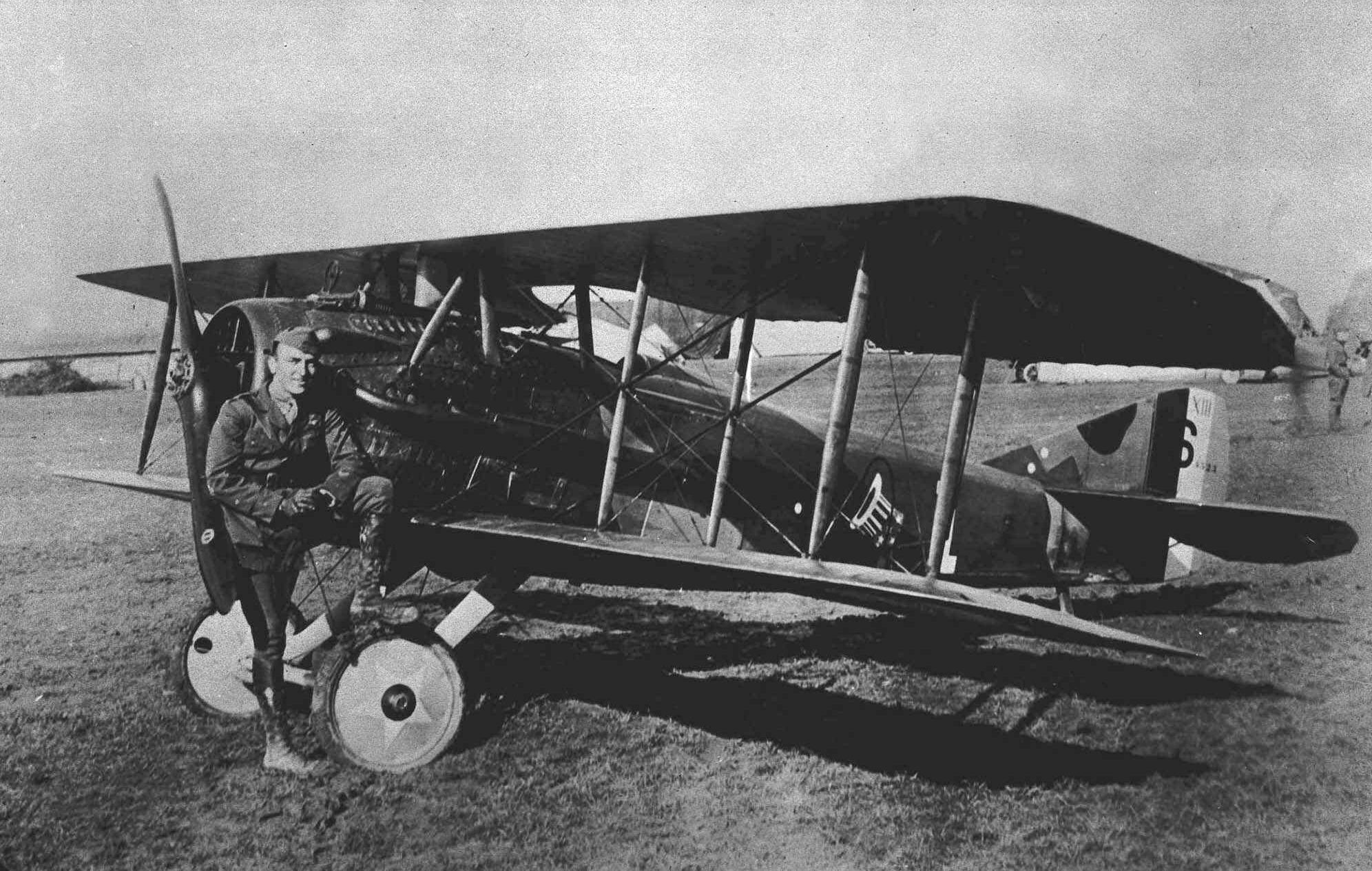 In this undated file photo, American World War I fighter pilot Eddie Rickenbacker poses with his Spad airplane. Airplanes became weapons in World War I. Airplanes were employed at first for reconnaissance, but air battles soon followed as each side tried to shoot down the enemy's observation planes.
Photo Credit: AP
AIR WARFARE

A little more than a decade after the Wright Brothers flew their first airplane, WWI combatants took to the skies to spy on one another — and then to shoot each other down. Early in the war, aircraft were equipped with cameras for taking reconnaissance photographs. Pilots started arming themselves with handguns and rifles to shoot down enemy biplanes. Soon, mounted machine guns were being used in aerial combat known as dogfights, giving rise to such legendary fighter aces as Germany's Manfred von Richthofen (aka 'The Red Baron'), American Eddie Rickenbacker and Canada's Billy Bishop.

Using submersible vessels to attack enemy ships had been tried as far back as the American Revolution. It wasn't until WWI that submarines were used in large numbers as part of naval operations. Germany was the first nation to fully utilize submarine technology, attacking Allied shipping in the Atlantic and infamously sinking the British ocean liner RMS Lusitania off the Irish coast in May 1915, killing 1,200 people, including 128 Americans. The outcry from the U.S. over the attack prompted Germany to shift much of its submarine attacks elsewhere. But the Germans resumed submarine attacks in early 1917 and sank several U.S. vessels, one of the key reasons for America entering the war. 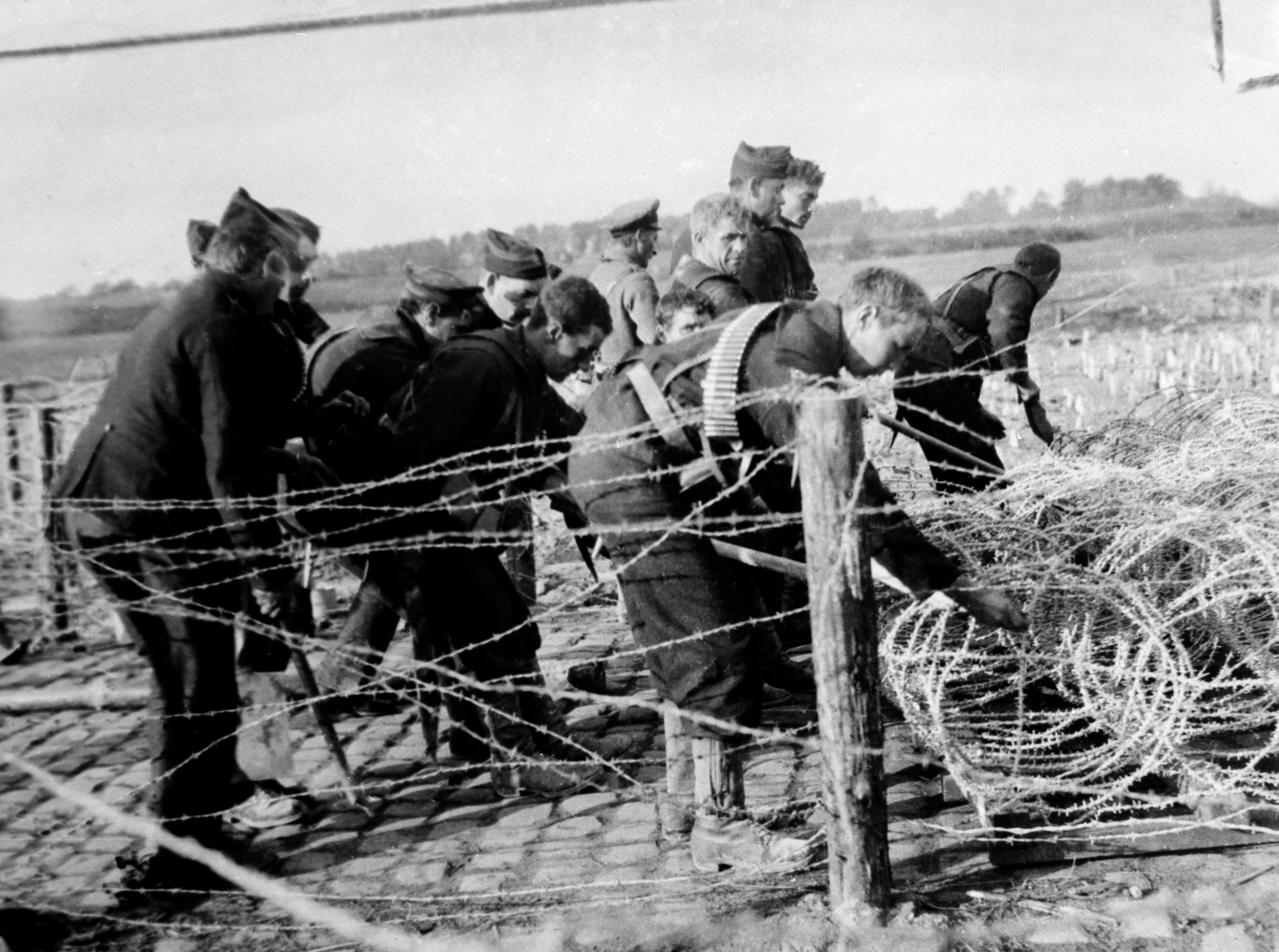 Invented in post-Civil War America for Midwestern homesteaders to confine their livestock, the strands of twisted wire with sharpened spurs could also be used to keep soldiers from reaching an enemy's positions. During WWI it was placed in front of trenches or arranged in such a way that enemy ground assaults were funneled into areas covered by machine gun and artillery fire. Barbed wire fences were ubiquitous on the Western Front, where snared soldiers made easy targets for small-arms fire.

Radiology pioneer Marie Curie is credited with coming up with the idea of loading X-ray machines onto vehicles and driving to the front lines outside Paris to treat wounded French soldiers. The fleet of modified vehicles she assembled served as mobile X-ray units that were credited with saving thousands of lives. Today's military medical support units can take the high-tech versions as close to the fighting as possible to examine wounded soldiers before sending them to larger field hospitals.

Trench coats replaced the earlier era's full-length, woolen great coats, which became heavy when wet. British officers serving in the trenches turned to established English clothing firms such as Burberry and Aquascutum for khaki-colored, waterproof coats with deep pockets large enough to hold maps and a belt at the waist with metal D-rings for attaching gear.

Wristwatches had been around in some form for decades, mostly as jewelry worn by women, but they became standard equipment for soldiers and pilots who didn't want to be fumbling for the traditional pocket watch while launching artillery-supported ground assaults or flying combat missions.

WWI was the first time in the nation's history that women were officially attached to branches of the U.S. military, and more than 30,000 served in uniform, mostly as nurses or switchboard operators. Thousands of other women joined the various stateside private organizations aiding the war effort, and they also wore uniforms.

A cartoon in popular Life magazine at the time showed two American soldiers looking at a young woman working at a desk job. "What will you do after the war if you can't get your old job back?" one asked. The other replied: "Marry the girl who's holding it down." 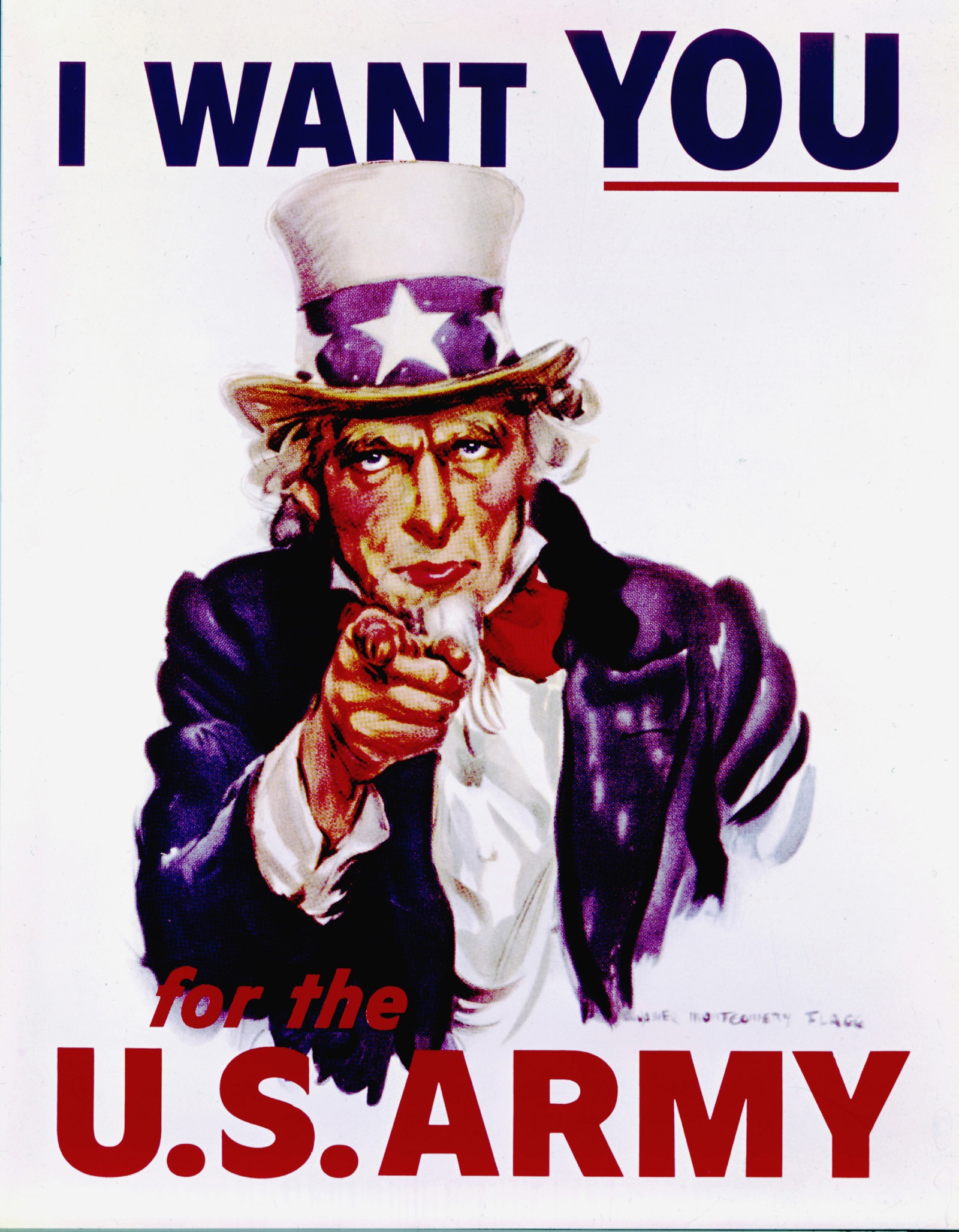 This undated file photo shows the classic World War I recruiting poster created by illustrator James Montgomery Flagg. Thursday, April 6, 2017, marks the 100th anniversary of the U.S. entry into World War I, and some of the innovations that were developed or came into wide use during the conflict are still with us today, including this iconic image of Uncle Sam pointing, with the message "I WANT YOU for the U.S. ARMY."
Photo Credit: AP
PATRIOTIC PROPAGANDA

American James Montgomery Flagg created the now-famous poster of a pointing Uncle Sam under the words "I Want You." Some 4 million copies of the U.S. version of the Army recruitment poster were printed in 1917-18, according to the Library of Congress website. The poster proved so popular it was re-introduced during World War II, when millions more were printed.

Similarly popular was George M. Cohan's jaunty wartime ditty "Over There," which proudly spread word to Europe that "the Yanks are coming." More than 2 million copies of the song's sheet music were sold by the end of the war.