Libertarians and independents are eroding the GOP's military support

Editor's note: This story is part of a series examining the views of military service members ahead of the presidential election.

Military voters have long been considered a safe support bloc for Republican political candidates, but a new poll conducted by Military Times and Syracuse University's Institute for Veterans and Military Families suggests conservatives shouldn’t take the troops for granted.

Nearly 40 percent of the active-duty service members surveyed in September said they don’t affiliate with either major political party, almost as many as those who consider themselves Republicans (about 43 percent). The survey included more than 2,200 responses, and IVMF analysts weighted the results to be scientifically representative of the total military demographic.

Two years ago, in a non-scientific survey of Military Times' active-duty readership, more than one-third said that neither Democrats nor Republicans had been strong advocates for the military, while 44 percent said they believed both major political parties were becoming less supportive of military issues. Over the nine years that question was asked in the annual survey, the percentage of respondents identifying as Republican dropped each year. 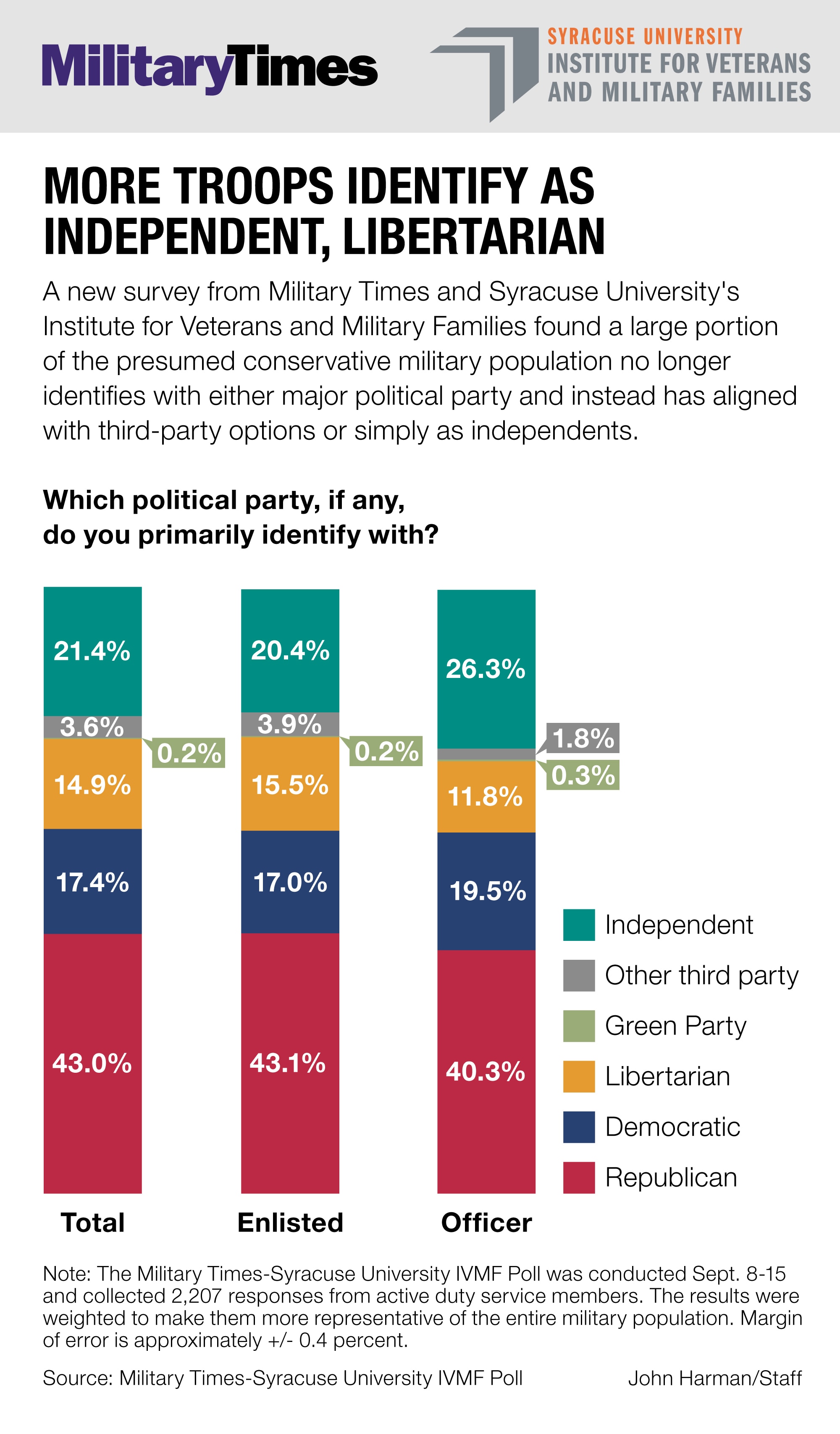 This trend is not unique to the military, of course. Nationwide, political party affiliation and satisfaction have fallen to historic lows. A Gallup poll conducted in January found that 42 percent of American voters identify as independents, the fifth year in a row that figure has been above 40 percent.

Approximately 29 percent of Americans now identify as Democrats and 26 percent as Republicans.

But the military, as a voting demographic, is mostly white males with a strong interest in defense issues, a group assumed to be overwhelmingly conservative in comparison to the general population. The new Military Times-IVMF poll suggests that, in reality, many of those votes may be up for grabs.

About 15 percent of respondents identified as Libertarians, a figure that gives the third-party stronger representation in the ranks than the general population.

A 2014 Pew Research poll found about 11 percent of Americans described their voting patterns as "libertarian," but state-specific data on the number of registered party voters is incomplete. Johnson drew only about 1 percent of the presidential vote in 2012, but he is polling nationally around 10 percent this cycle.

Christopher Preble, vice president for defense and foreign policy studies at the libertarian Cato Institute, said he's not surprised to see the third-party message is having strong appeal among military personnel.

"In part, the military population is younger, and millennials on a range of issues tend to be rejecting the two major parties more," he said.

"And people in the military have a better appreciation for the strength and weaknesses for the use of military force overseas, so they’re open to the [party’s] non-interventionist message."

Johnson has hammered that message on the campaign trail, saying he is committed to using military force to protect American security and interests but opposed to overseas nation-building missions and an aggressive use of power in foreign affairs.

A large part of Johnson’s appeal among military voters — and perhaps their drift toward the Libertarian Party — appears to be resentment of the major party candidates.

Between Sept. 8 and 15, Military Times and IVMF conducted a voluntary, confidential online survey of U.S. service members. The questions focused on the nation's current political climate, the 2016 presidential election and other relevant issues.

The survey received 2,207 responses from active-duty troops. A standard methodology was used by IVMF analysts to estimate the weights for each individual observation of the survey sample. The margin of error for the party preference question is 0.4 percent. Other questions have slightly higher margins of error.

The survey audience was 85 percent male and 15 percent female, and had a mean age of 29 years old. The respondents identified themselves as 73 percent white, 16 percent Hispanic, 8 percent African American, 4 percent Asian and 8 percent other ethnicities. Respondents were able to select more than one race.

Responses came from each of the 50 states, the District of Columbia and unspecified sites overseas. Follow @LeoShane

Leo Shane III covers Congress, Veterans Affairs and the White House for Military Times. He can be reached at  lshane@militarytimes.com .

Libertarians and independents are eroding the GOP's military support

Military voters have long been considered a safe support bloc for Republican candidates, but a new Military Times/Institute for Veterans and Military Families poll suggests conservatives shouldn’t take them for granted.

Lawmakers are questioning whether tattoo policies are slowing military recruiting.

The 2022 Warrior Games will be held at the ESPN Wide World of Sports complex at Disney World, the first time Disney has hosted the Games.