Many servicemembers have serious doubts that the next commander in chief will be able to handle the biggest military and veterans issues facing the country, even if their pick for president wins.

According to results from the Military Times/Institute for Military and Veterans Families Poll conducted last week, roughly one third of active-duty troops voting for Democratic nominee Hillary Clinton don’t think she’s the best candidate to reform the Department of Veterans Affairs or address veterans suicide.

On the other end of the political spectrum, more than half of servicemembers backing Republican presidential nominee Donald Trump don’t think he’s the best option among the candidates to deal with sexual assault in the ranks. One in five of troops voting for him in November say he has a poor understanding of military affairs and issues.

And among all active-duty troops polled, 10 percent think that none of the four top presidential candidates is a good choice to defend the country from future terrorist attacks. 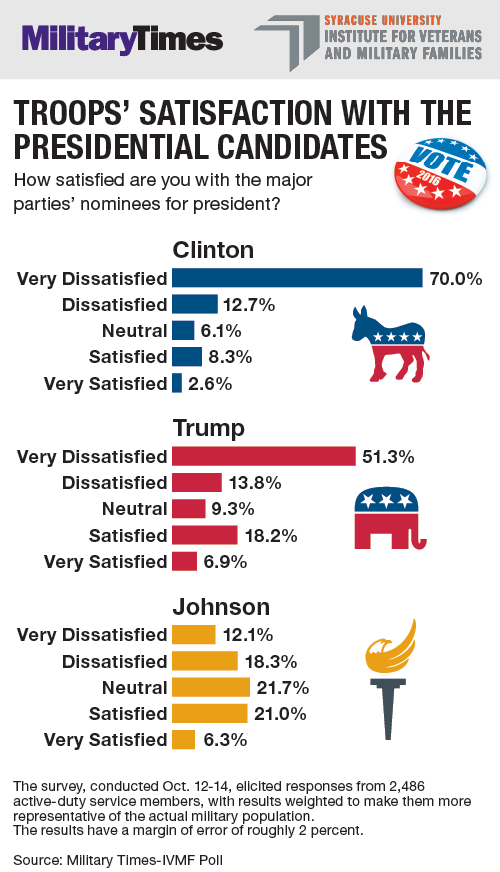 "I think the candidates are probably the worst ever," said one Air Force technical sergeant responding to the poll. "This is not an Abraham Lincoln, Ronald Reagan, George Washington, John Adams kind of election. Yet the country is in need of leadership like these men."

That pessimism and lack of confidence from troops in the presidential candidates reflects their general dissatisfactions with their choices this election cycle. Nearly 83 percent of those surveyed said they are upset with Clinton as the Democratic Party’s pick to be president, and more than 65 percent said the same of Trump as the Republican nominee.

The military malaise follows national polls that show more than half of voters have an unfavorable opinion of both major party candidates.

The Military Times/IVMF Poll found significant active-duty support for Trump, the business mogul turned GOP nominee. More than 40 percent of those surveyed said they planned to vote for him in the presidential election, well above Libertarian candidate Gary Johnson at 27 percent and Clinton at 21 percent.

But results on individual issues were more conflicted.

Clinton was the top pick for the candidate best able to address military sexual assault (27 percent) and essentially tied with Trump on the question of who was best to handle issues of race (24 percent to Trump’s 25 percent).

About 13 percent of troops surveyed said that none of the candidates was a good pick to prevent veterans’ suicide, which number 20 a day according to the latest VA statistics. Roughly 12 percent had confidence in any of the candidates making wise foreign policy decisions.

Election Day is Nov. 8, although a sizable portion of military voters will cast their vote before then though absentee ballots due to deployments or assignments outside their home states.

Between Oct. 12 and 14, Military Times and IVMF conducted a voluntary, confidential online survey of U.S. service members. The questions focused on the nation's current political climate, the 2016 presidential election and other relevant issues.

The survey received 2,486 responses from active-duty troops. A standard methodology was used by IVMF analysts to estimate the weights for each individual observation of the survey sample. The margin of error for the candidate issue questions is about 2 percent. Other questions had slightly higher margins of error.

The survey audience was 85 percent male and 15 percent female, and had a mean age of 29 years old. The respondents identified themselves as 70 percent white, 11 percent Hispanic, 8 percent African American, 4 percent Asian and 8 percent other ethnicities. Respondents were able to select more than one race. Follow @LeoShane

Leo Shane III covers Congress, Veterans Affairs and the White House for Military Times. He can be reached at lshane@militarytimes.com. Follow @George_Altman

The encounter marks the longest dogfight in U.S. military history.

The drills featured a live fire exercise with more than 140 aircraft and 12 naval assets.

How troops can watch the NFL Playoffs for free