NORFOLK, Va. — With praise and a blessing for the military, President Donald Trump helped hand over the USS Gerald R. Ford to the Navy on Saturday and said the state-of-the-art aircraft carrier will send a “100,000-ton message to the world” about America’s military might when it is ultimately deployed.

U.S. allies will rest easy, Trump said, but America’s enemies will “shake with fear” when they see the Ford cutting across the horizon.

The president and commander in chief of the U.S. armed forces likened the $12.9 billion warship to “an incredible work of art” and boasted about the American labor that went into building a vessel that eventually will house thousands of sailors and crew members.

Trump’s participation in the ceremony also capped “Made in America” week at the White House, during which the president and administration officials sought to draw attention to U.S. manufacturing. 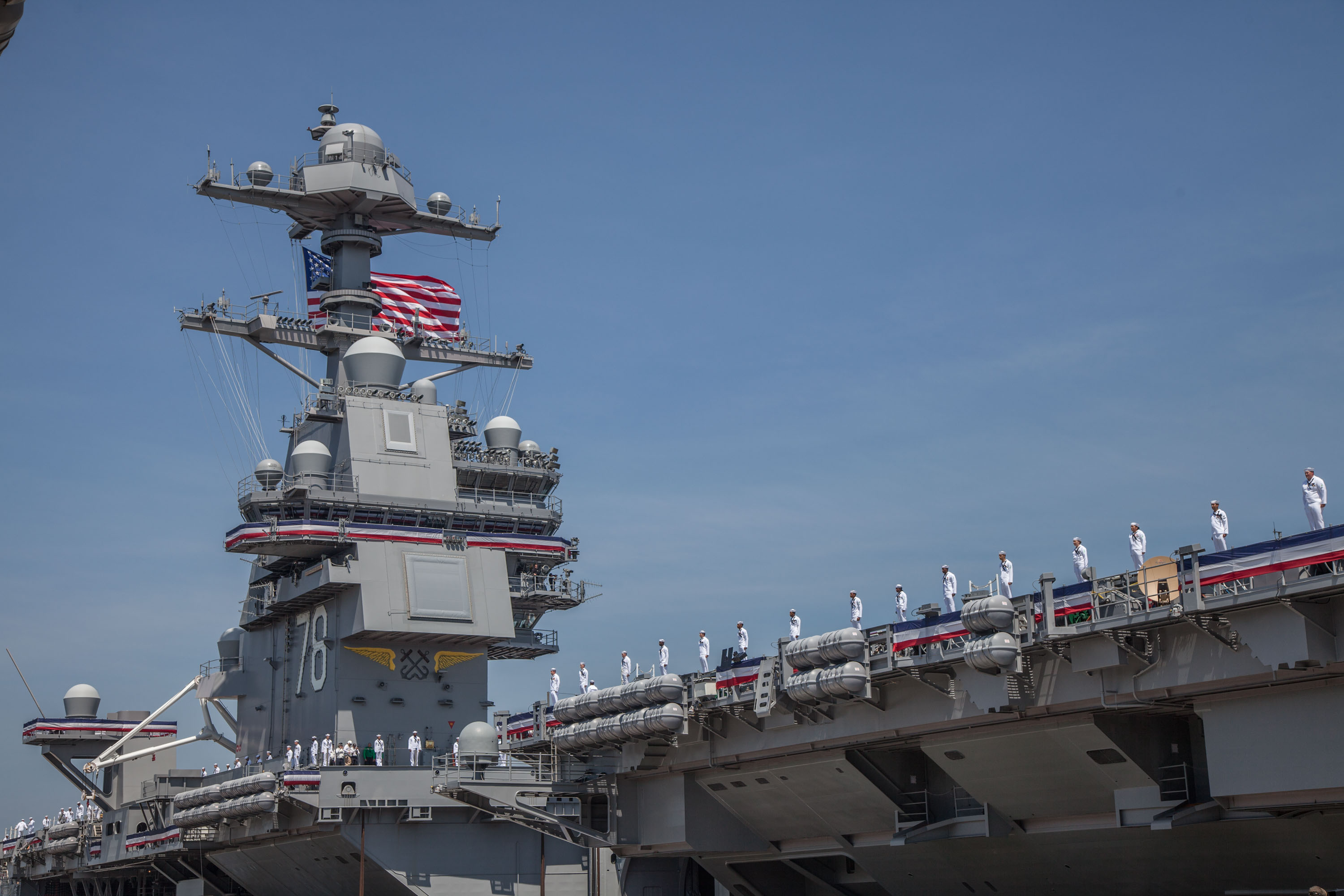 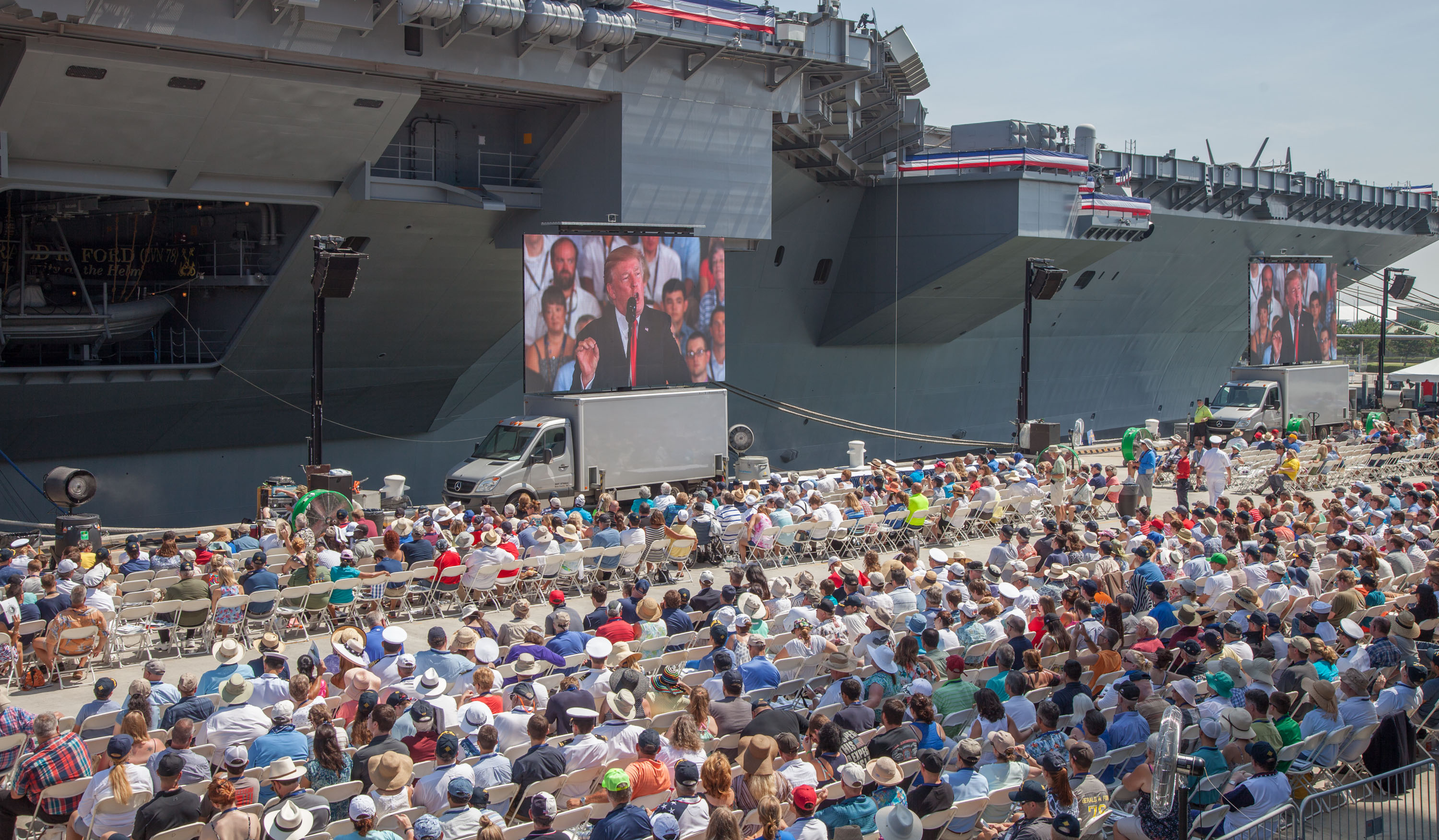 President Donald Trump gives the keynote address at the commissioning of the aircraft carrier Gerald R. Ford and is watched by thousands of spectators on Pier 11 at Norfolk Naval Station.
3 of 7 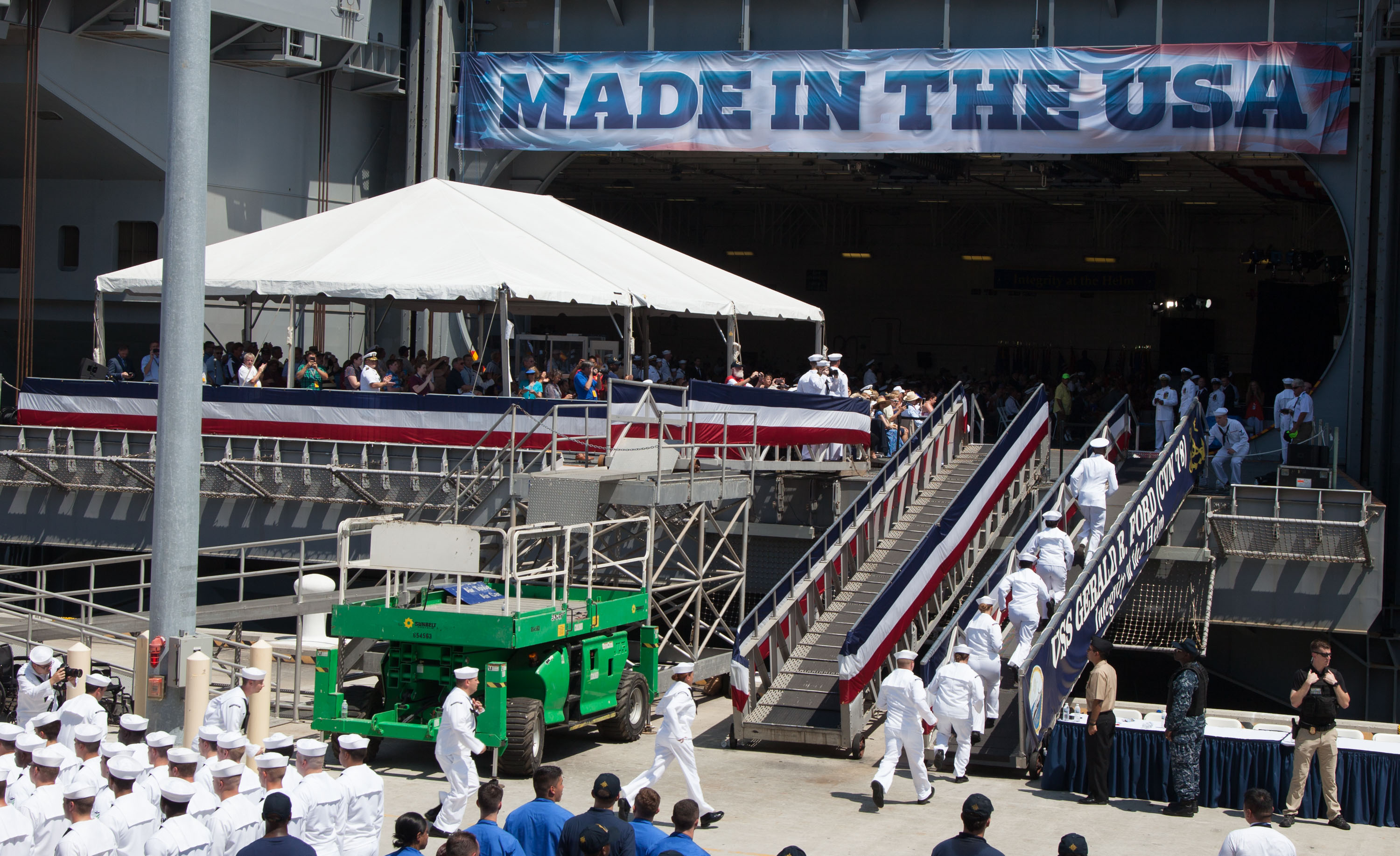 Navy F/A 18 Hornets fly over the carrier Eisenhower during the playing of the National Anthem and the presentation of the colors as the Navy put into commission the newest aircraft carrier, the USS Gerald R. Ford.
4 of 7 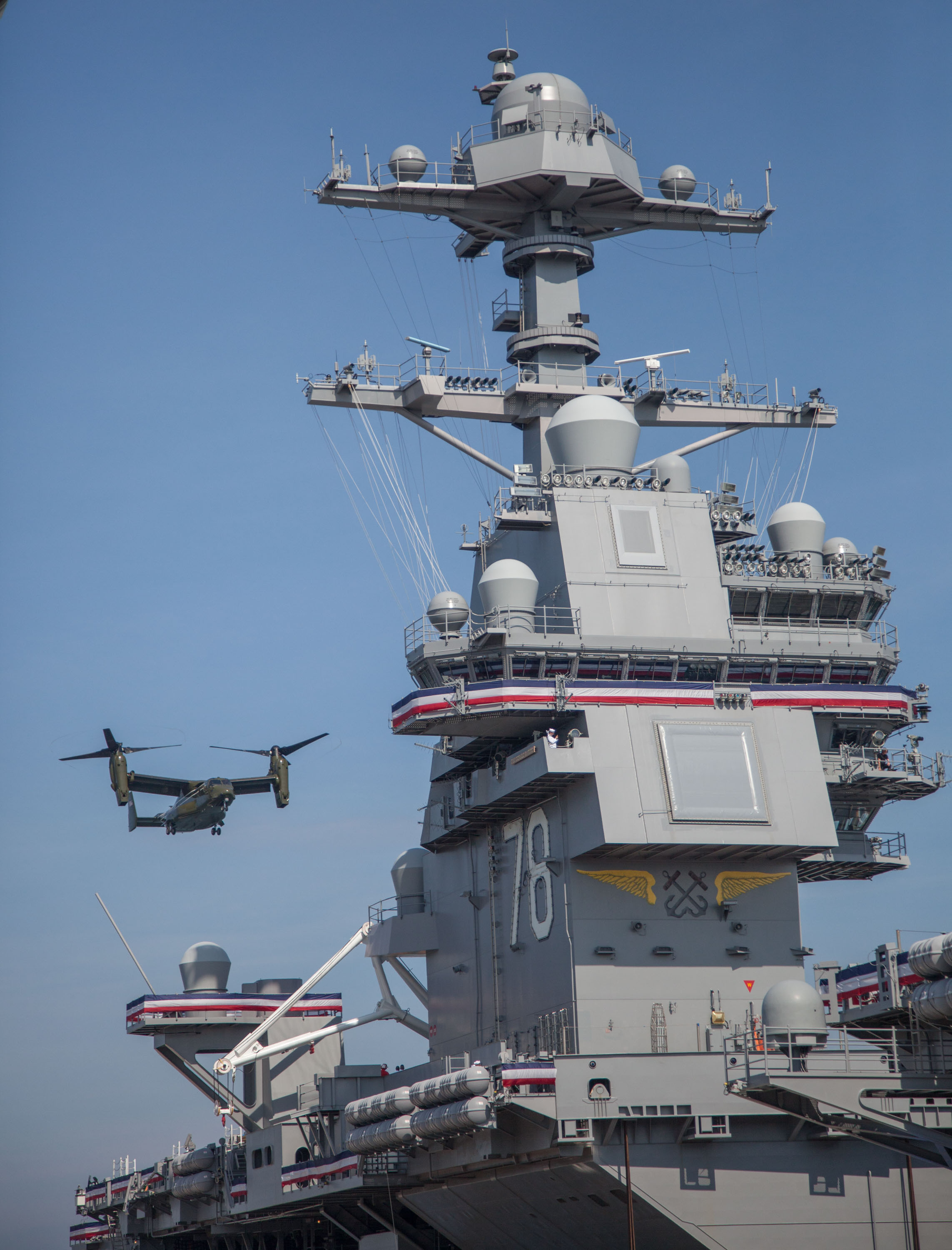 An Osprey tilt-rotor aircraft from Marine Helicopter Squadron One make their approach to the soon-to-be commissioned aircraft carrier Gerald R. Ford slightly in advance of the arrival of President Donald Trump, who presided over the event.
5 of 7 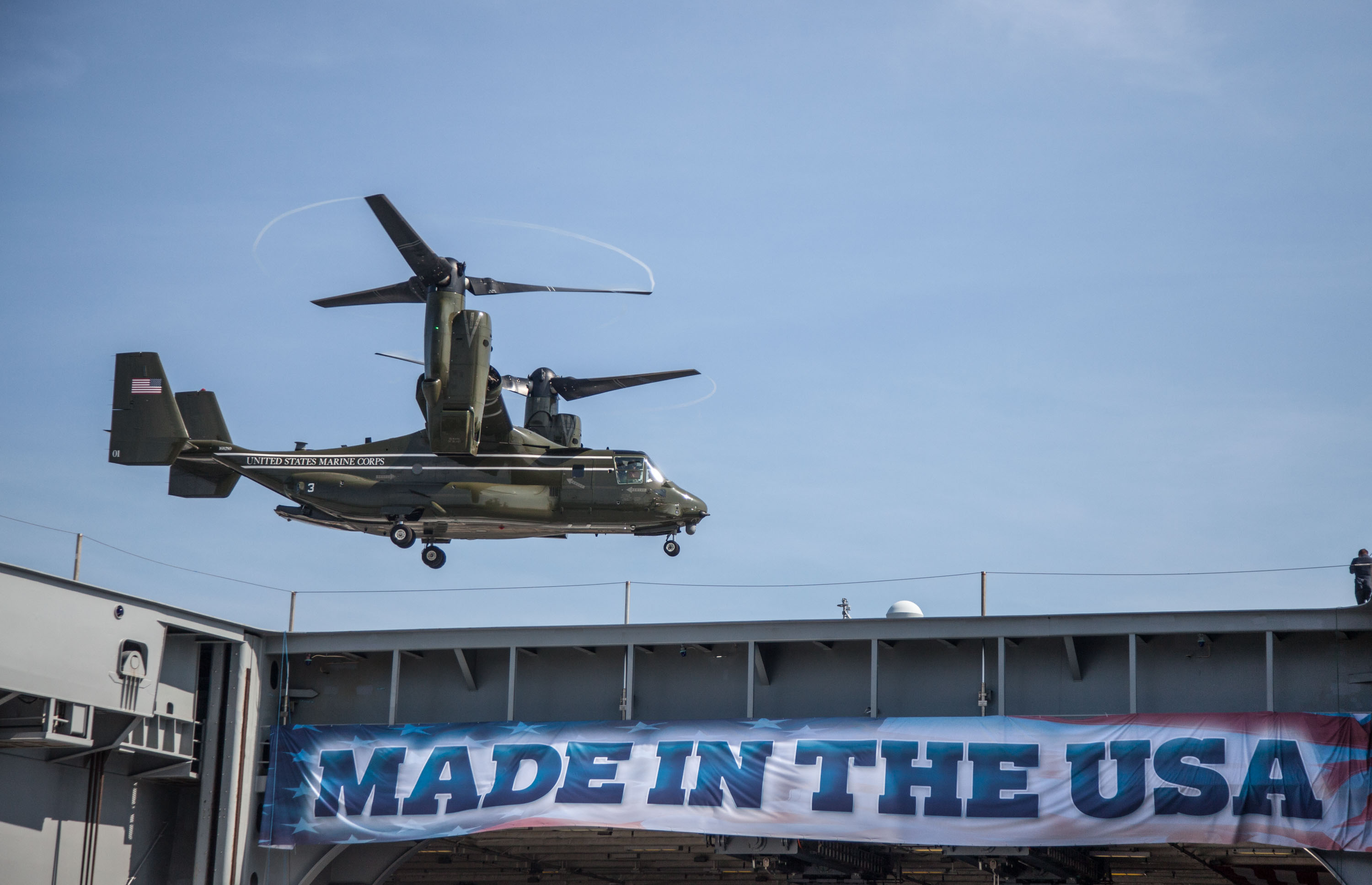 A MV-22 Osprey's tilt-rotor aircraft from Marine Helicopter Squadron One lands on the the soon to be commissioned aircraft carrier Gerald R. Ford in advance of the arrival of President Donald Trump, who presided over the event.
6 of 7 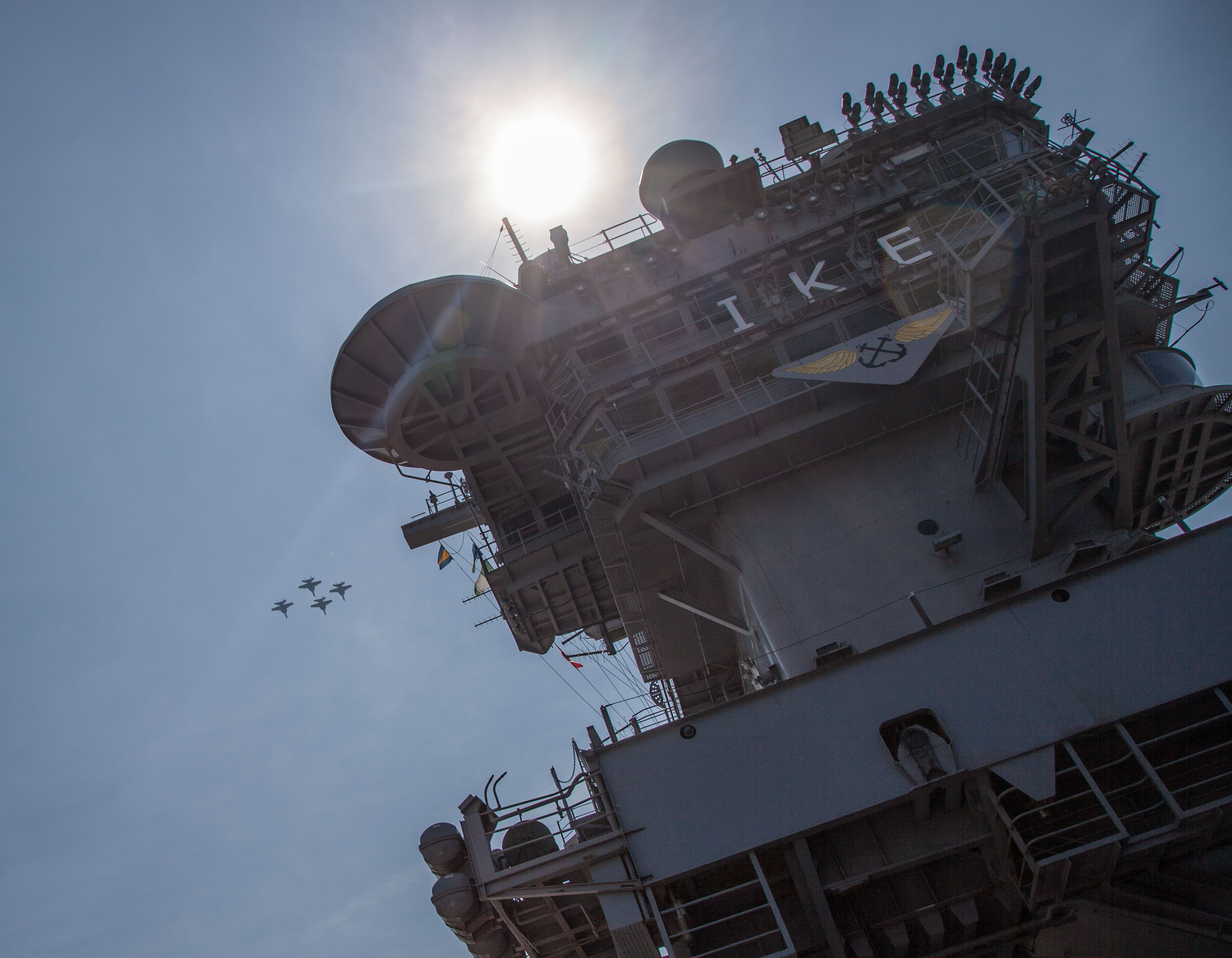 Navy F/A 18 Hornets fly over the carrier Eisenhower during the playing of the National Anthem and the presentation of the colors as the Navy put into commission the newest aircraft carrier, the USS Gerald R. Ford.
7 of 7 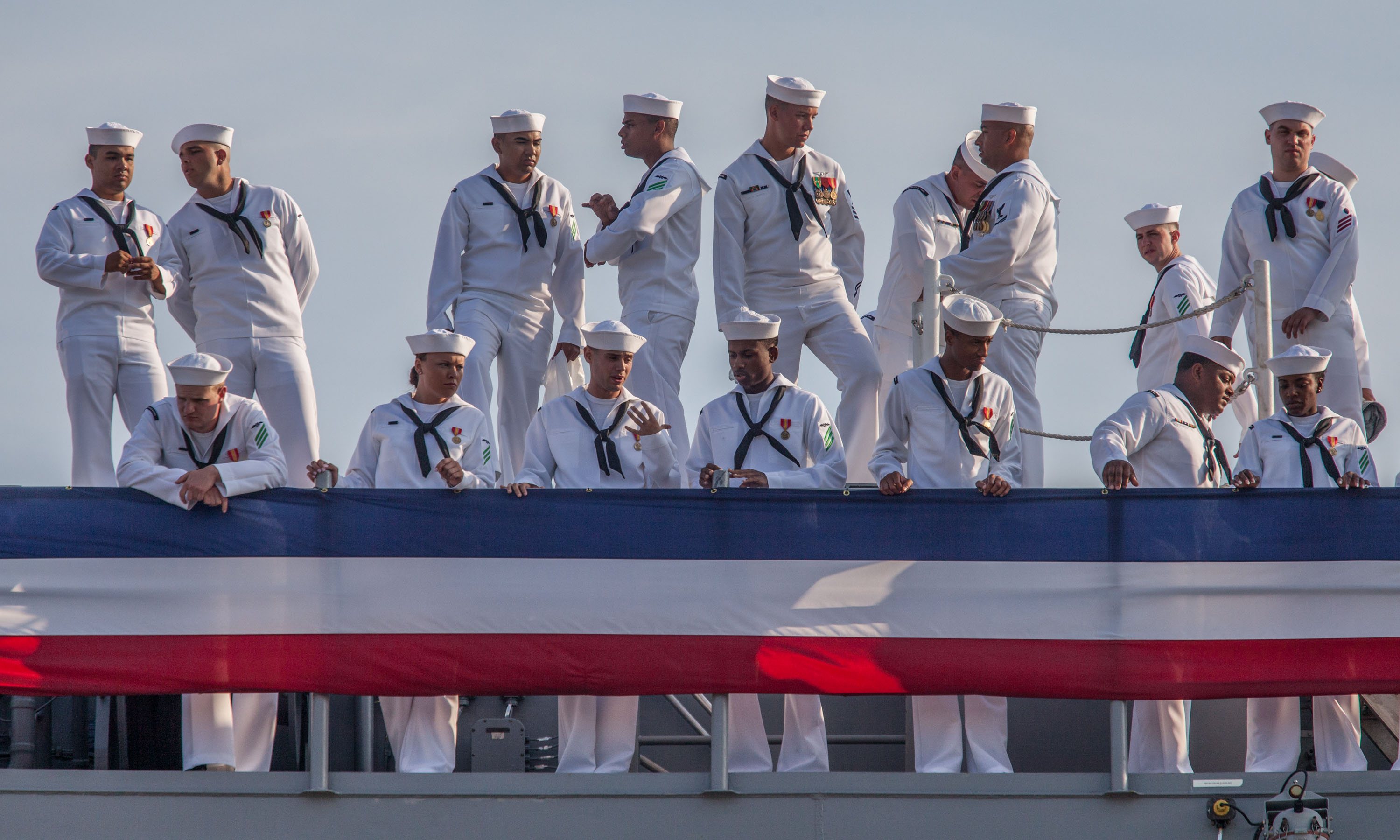 Sailors aboard the aircraft carrier Gerald R. Ford watch as the crowd gathers on pier II to watch their ship join the fleet today. The Ford is the first of a new class of carriers and won't be fully ready to deploy for another five years.

“American steel and American hands have constructed this 100,000-ton message to the world,” Trump said of the Ford during a speech that praised the bravery and spirit of U.S. service members and referenced his desire for a buildup after years of spending restrictions.

“American might is second to none and we’re getting bigger and better and stronger every day of my administration. That I can tell you,” Trump told thousands of service members and guests, including former defense secretaries Dick Cheney and Donald Rumsfeld, all packed into the steamy hangar bay on the main deck.

“Wherever this vessel cuts through the horizon, our allies will rest easy and our enemies will shake with fear because everyone will know that America is coming, and America is coming strong,” Trump said.

After the speech, he put the Ford into commission and asked God to “bless and guide this warship and all who shall sail in her.” He was followed by Susan Ford Bales, the ship’s sponsor and daughter of the 38th president, whom the ship honors.

“Anchors Aweigh” played as row after row of sailors in crisp, white uniforms who had been standing in formation began filing off to man their stations. Sirens and bells sounded, horns blared and the U.S. flag was hoisted high above the deck.

Soon after, the captain was informed that the “ship is manned and ready and reports for duty to the fleet.”

Trump, who visited the carrier in March, told Time magazine this year that the Navy should revert to using steam catapults to launch fighter jets because some of the USS Ford’s state-of-the-art systems and technology “costs hundreds of millions of dollars more money and it’s no good.”

Construction started in 2009 and was to be completed by September 2015 at a cost of $10.5 billion. The Navy has blamed the delays and budget overruns on the ship’s advanced systems and technology, including electromagnetic launch systems for jets and drones that will replace steam catapults.

The warship also has a smaller island that sits farther back on the ship to make it quicker to refuel, re-arm and relaunch planes, and a nuclear power plant designed to allow cruising speeds of more than 30 knots and operation for 20 years without refueling.

The vessel completed sea trials in April but still will go through a battery of tests and workups at sea before becoming ready for deployment, work that is expected to cost nearly $780 million and take more than four years to complete, congressional auditors said this month.

Docked at Naval Station Norfolk, the USS Ford eventually will house about 2,600 sailors, 600 fewer than the previous generation of aircraft carriers. The Navy says that will save more than $4 billion over the ship’s 50-year lifespan.

The air wing to support the Ford could add more personnel to the ship, which is designed to house more than 4,600 crew members.

The Ford was built at Newport News Shipbuilding, a giant Navy contractor in Virginia.

Trump used the appearance to prod Congress to approve his request for an additional $54 billion for the military next year. House lawmakers, at least, are working to up his request.

Trump called for an end to mandatory spending reductions that he said has led to deferred maintenance, insufficient spending on new equipment and technology, and a drop in military readiness. He said changes in the defense acquisition process are needed to make sure the U.S. gets the best equipment at the best prices.