U.S. admiral in disputed South China Sea: 'We will be here'

By Jim Gomez, The Associated Press

ABOARD USS CARL VINSON, South China Sea — America will continue to patrol the South China Sea to ensure freedom of navigation and overflight in the disputed region, a U.S. admiral said Friday amid questions whether U.S. involvement in one of Asia's potential flashpoints will change.

"We will be here," Rear Adm. James Kilby said on board the aircraft carrier USS Carl Vinson as it steamed through the gentle blue waters, with F18 fighter jets landing, taking off on catapults and zooming over the mammoth warship.

"We have operated here in the past, we're going to operate here in the future, we're going to continue to reassure our allies," Kilby said. "We're gonna continue to demonstrate that international waters are waters where everyone can sail, where everyone can conduct commerce and merchant traffic and that's the message we want to leave with people."

Kilby's comments followed reported Chinese moves to install missile defense systems on islands it recently built, and the inauguration of a new U.S. president who has raised questions about America's role in Asia. 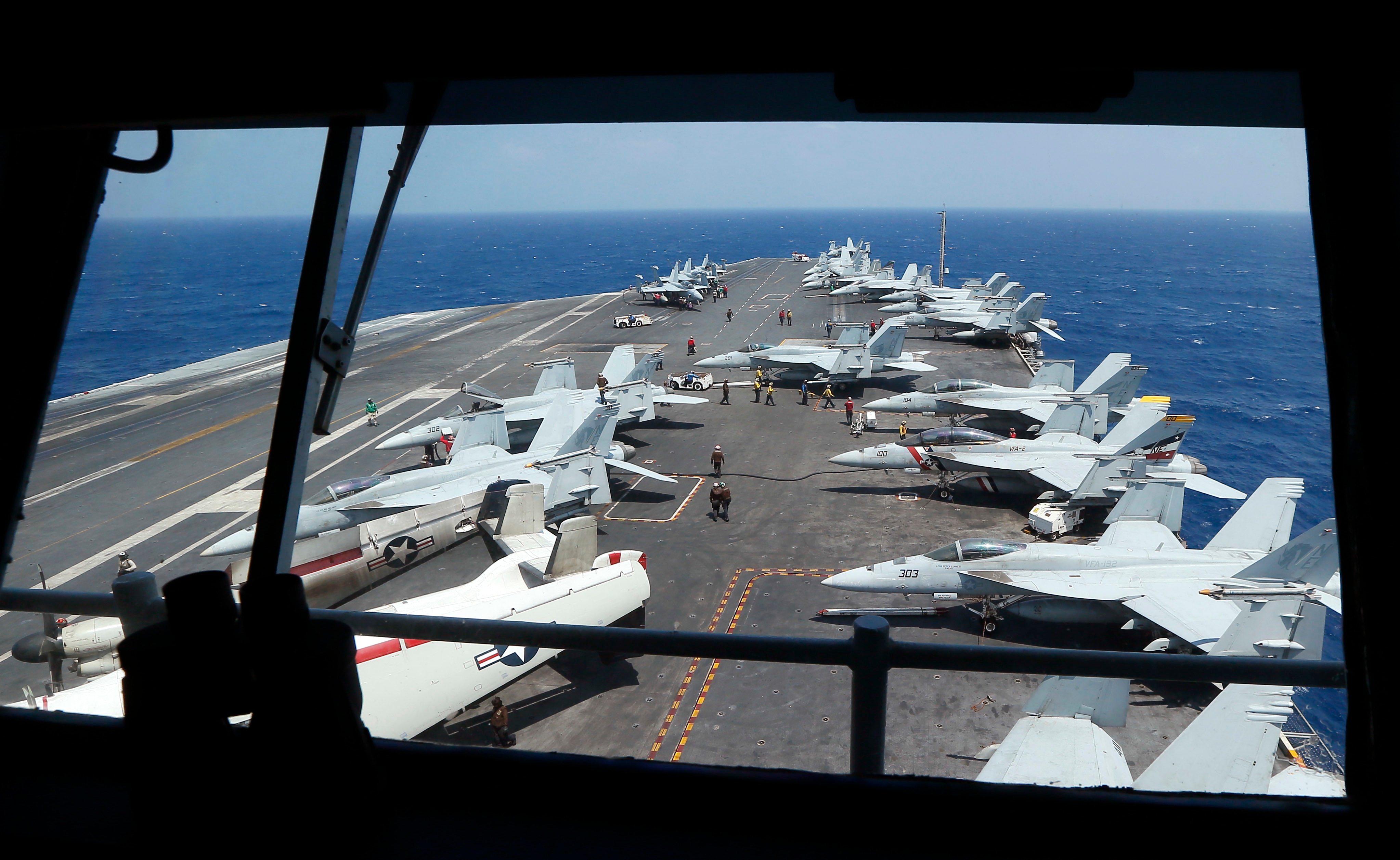 Fighter jets on board the U.S. Navy aircraft carrier USS Carl Vinson (CVN 70) are prepared for patrols off the disputed South China Sea Friday, March 3, 2017.
Photo Credit: Bullit Marquez/AP
The U.S. military took a group of journalists to the aircraft carrier during a routine patrol of the South China Sea, one of the world's security hotspots, in a mission that U.S. Navy officials said has continued for decades.

A U.S. administration official has said the Carl Vinson strike group's deployment in the South China Sea, a month after President Donald Trump took office, signaled U.S. intent to have a more active naval presence in the region.

Accompanied by a guided-missile destroyer and aircraft, the Carl Vinson began "routine operations" in the South China Sea on Feb. 18. It last deployed to the Western Pacific in 2015 when it conducted an exercise with the Malaysian navy and air force, according to the Pentagon.

The official declined to comment on whether the aircraft carrier group would undertake a freedom of navigation operation, a right that American officials have asserted in the past. The official requested anonymity as he was not authorized to speak to journalists on the administration's policy.

Under the Obama administration, the U.S. Navy sailed close to islands built by China from previously submerged disputed reefs on so-called freedom of navigation operations in the South China Sea, provoking warnings and protests from Beijing.

During his Senate confirmation hearing for secretary of state, Rex Tillerson stirred controversy by comparing China's island-building and deployment of military assets to Russia's 2014 annexation of Crimea, and suggesting China's access to the island should not be allowed.

Defense Secretary James Mattis, however, has stressed the importance of diplomacy in resolving disputes in the South China Sea rather than military maneuvers.

U.S. Navy officials said Friday the Carl Vinson was patrolling waters somewhere between China's southernmost island of Hainan and the Scarborough Shoal off the northwestern Philippines. China seized the shoal in 2012 after a tense standoff with Philippine government vessels, but the U.S. Navy officials said no incidents had occurred in two weeks of sailing in the busy waters.

"I would say everyone we've encountered so far has acted professionally as we would hope they would do in accordance with international rules, standards, norms and laws," Kilby said.

China, the Philippines, Vietnam, Taiwan, Malaysia and Brunei have long contested ownership of the South China Sea, which straddles one of the world's busiest sea lanes and is believed to sit atop vast deposits of oil and gas.

Army vet accused of faking paralysis to get $1 million in VA benefits, using some to buy BMW

Trump bashes Powell for his role in Iraq War buildup

Powell, who died Monday at age 84, appeared before the United Nations Security Council to provide justification for military action against Iraqi dictator Saddam Hussein, which he later acknowledged was a mistake.

Ukraine’s defense minister fired back Tuesday at Russian predictions that the U.S., in light of its rushed exit from Afghanistan, will eventually abandon Ukraine.

The Army study will look at alternative methods to determine soldiers' body mass, health and fitness.

A Maryland couple arrested earlier this month on charges of trying to sell information about nuclear-powered warships to a foreign country have been indicted, the Justice Department said Tuesday.

The Taliban have promised plots of land to relatives of suicide bombers who attacked U.S. and Afghan soldiers, in a provocative gesture that seems to run counter to their efforts to court international support.

El Salvador has the potential to be the Soviet Union’s Cuba.

While the Navy has charged a junior sailor with starting the fire last summer, a command investigation lays blame for the botched response at all levels of command.

Here are companies are competing to replace the Bradley

Army vet accused of faking paralysis to get $1 million in VA benefits, using some to buy BMW

Trump bashes Powell for his role in Iraq War buildup

Combined Russian and Chinese military power will approach, but not exceed US: report