BEIJING — China's foreign minister said Wednesday that North Korea could suspend its nuclear and missile activities in exchange for a halt in joint U.S.-South Korea military drills, in an unusually public proposal that analysts said showed Beijing's growing alarm over the tensions.

Foreign Minister Wang Yi said frictions between the North and Washington and Seoul were like "two accelerating trains" headed at each other, with neither side willing to give way.

"The question is: Are the two sides really ready for a head-on collision?" Wang told reporters. "Our priority now is to flash the red light and apply the brakes on both trains." 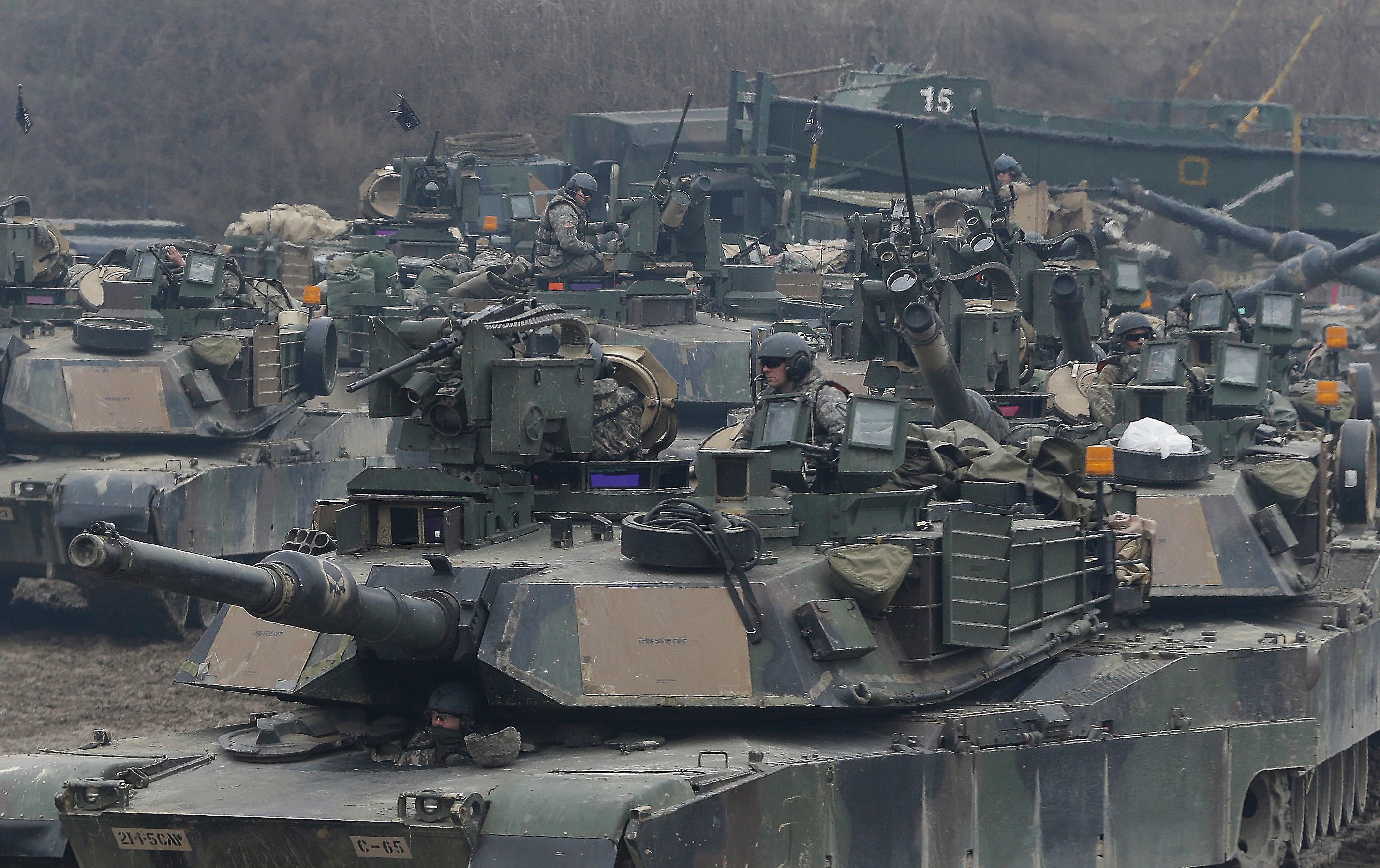 In this Dec. 10, 2015, file photo, U.S. M1A2 SEP Abrams battle tanks prepare to cross the Hantan river during a river crossing operation, part of an annual joint military exercise between South Korea and the United States, in Souith Korea.
Photo Credit: Ahn Young-joon/AP
Wang said China has proposed that as a first step to defusing the looming crisis, the North might halt its nuclear program development and missile testing if the U.S. and South Korea suspended their military drills.

"This suspension-for-suspension can help us break out of the security dilemma and bring the parties back to the negotiating table," Wang said, describing the approach as trying to address all parties' concerns in a "synchronized and reciprocal" manner.

North Korea first floated the proposal in 2015, but it was swiftly dismissed by Washington and Seoul, who say the two issues are unrelated. Their view is that North Korea's nuclear and missile program is in violation of U.N. resolutions whereas the joint U.S.-South Korea drills are a long-standing practice, analysts say.

Chinese scholars said Beijing has privately discussed this proposal with the countries involved but Wang's move to make it public could be a sign that China plans to take a more aggressive approach to the issue to prevent it from spinning out of control.

"China is becoming an utterly important victim of the turbulent situation on the Korean Peninsula, therefore it has unprecedentedly expressed its views in public," said Guo Rui, international relations expert at Jilin University.

China has been stepping up pressure on North Korea, its once-close Communist ally, to give up its nuclear and ballistic missile programs. Last month, Beijing suspended all coal imports from North Korea for the rest of the year, a move that deprives the North of an important source of foreign currency. Beijing wants the U.S. in return to restart long-stalled negotiations with North Korea.

Wang's move to publicize Beijing's proposal could also be directed at Washington ahead of Secretary of State Rex Tillerson's visit to China later this month.

"Raising such a proposal without seeking the views from the U.S. and South Korea will likely bring pressure to Tillerson's upcoming visit to China," said Cheng Xiaohe, an international relations expert at Renmin University in Beijing. "Talking about it publicly also indicates that China is hoping to have some achievement."

A White House official downplayed Wang's suggestion, saying China has made similar proposals in the past. The official was not authorized to discuss the policy publicly and spoke on condition of anonymity.

The South Korean government had no immediate response to Wang's comments Wednesday.

Wang likely renewed the dual suspension proposal in the hopes that President Donald Trump might see it as an alternative approach, said John Delury, a North Korea expert at Yonsei University's Graduate School of International Studies in Seoul.

"Wang Yi is putting it out there for Trump, saying 'here's an off-ramp to the current tensions,'" Delury said in a telephone interview from Seoul.

With tensions rising again, attitudes among officials and North Korea watchers are now diverging over how to approach the North, Delury said. While some want greater engagement, others are calling for stronger measures, possibly including military action, he said.

Trump, meanwhile, has yet to articulate a clear policy toward the North, other than to tweet that he wouldn't let it obtain nuclear weapons to attack America.

"The proposal is the same, but the context is different," Delury said.

Wang, who answered a range of questions at a briefing on the sidelines of China's annual national legislative sessions, also urged South Korea to suspend deployment of a U.S. anti-missile system, saying Seoul had made a "wrong choice."

Washington and Seoul say the system is defensive and not meant to be a threat to Beijing. China is opposed to the system, saying it would allow U.S. radar to peer deep into its territory and monitor its flights and missile launches.

"We urge some forces in South Korea not to keep insisting on taking this path, otherwise the result can only be damage to others and harm to yourself," Wang said.

Lawmakers are questioning whether tattoo policies are slowing military recruiting.

The 2022 Warrior Games will be held at the ESPN Wide World of Sports complex at Disney World, the first time Disney has hosted the Games.