Tillerson: Use of preemptive force an option with North Korea

SEOUL, South Korea — Secretary of State Rex Tillerson said Friday it may be necessary to take pre-emptive military action against North Korea if the threat from their weapons program reaches a level "that we believe requires action."

Tillerson outlined a tougher strategy to confront North Korea's nuclear threat after visiting the world's most heavily armed border near the tense buffer zone between the rivals Koreas. He also closed the door on talks with Pyongyang unless it denuclearizes and gives up its weapons of mass destruction.

Asked about the possibility of using military force, Tillerson told a news conference in the South Korean capital, "all of the options are on the table." 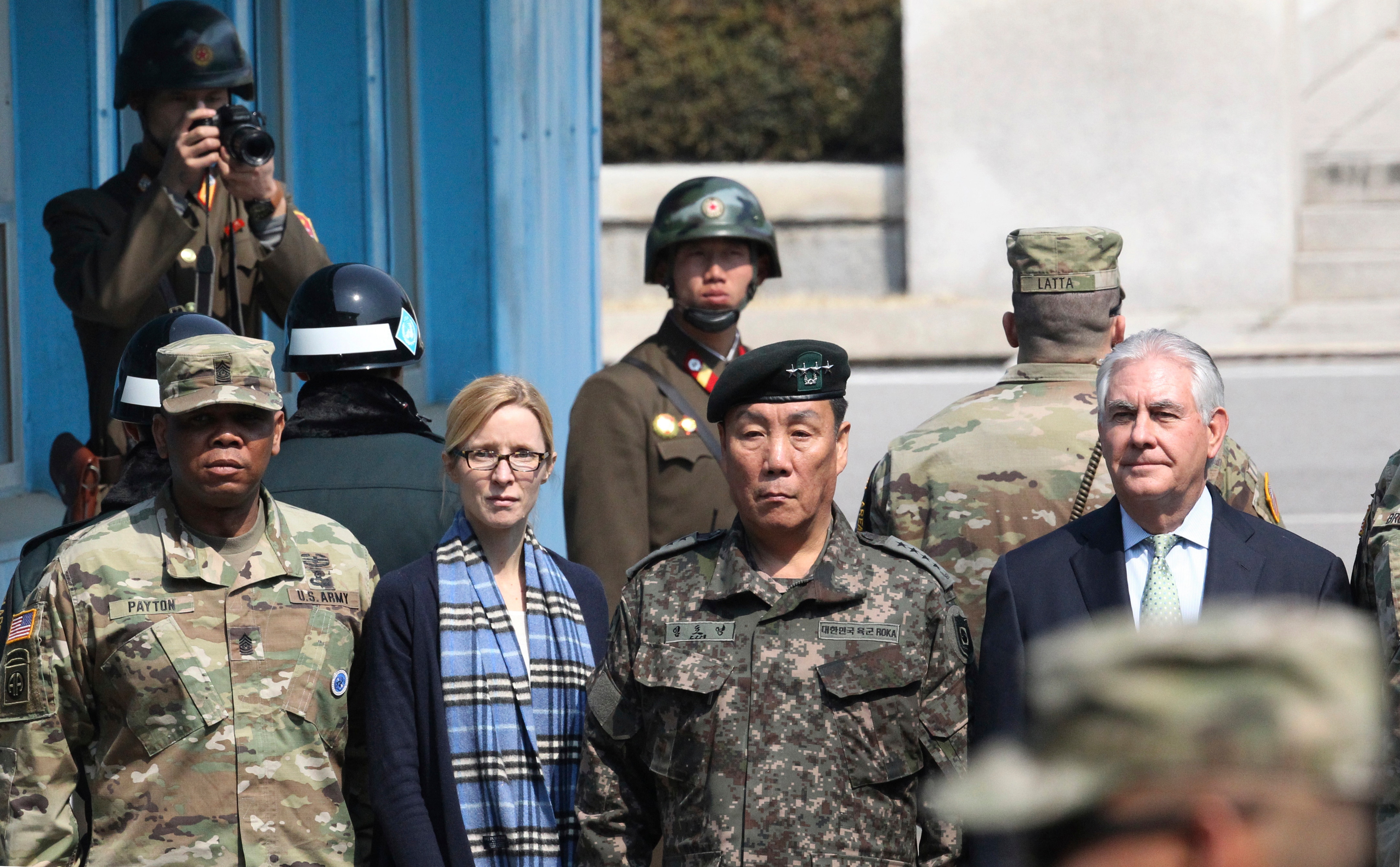 Tillerson said the U.S. does not want a military conflict, "but obviously if North Korea takes actions that threaten South Korean forces or our own forces that would be met with (an) appropriate response. If they elevate the threat of their weapons program to a level that we believe requires action that option is on the table."

But he said that by taking other steps, including sanctions, the U.S. is hopeful that North Korea could be persuaded to take a different course before it reaches that point.

Past U.S. administrations have considered military force because of North Korea's development of nuclear weapons and ballistic missiles to deliver them, but rarely has that option been expressed so explicitly.

Tillerson met Friday with his South Korean counterpart Yun Byung-se and its acting president, Hwang Kyo-ahn on the second leg of a three-nation trip which began in Japan and will end in China. State Department officials have described it as a "listening tour" as the administration seeks a coherent North Korea policy, well-coordinated with its Asian partners.

Earlier Friday, Tillerson touched down by helicopter Friday at Camp Bonifas, U.S.-led U.N. base about 400 meters (438 yards) from the Demilitarized Zone, a Cold War vestige created after the Korean War ended in 1953. He then moved to the truce village of Panmunjom inside the DMZ, a cluster of blue huts where the Korean War armistice was signed.

U.S. Secretary of State Rex Tillerson, center, meets with U.S. and South Korea soldiers before the lunch meeting at the Camp Bonifas near the border village of Panmunjom, which has separated the two Koreas since the Korean War, in Paju, South Korea, Friday, March 17, 2017.

Tillerson is the latest in a parade of senior U.S. officials to have their photos taken at the border. But it's the first trip by the new Trump administration's senior diplomat.

The DMZ, which is both a tourist trap and a potential flashpoint, is guarded on both sides with land mines, razor wire fence, tank traps and hundreds of thousands of combat-ready troops. More than a million mines are believed to be buried inside the DMZ. Land mine explosions in 2015 that Seoul blamed on Pyongyang maimed two South Korean soldiers and led the rivals to threaten each other with attacks."

Hordes of tourists visit both sides, despite the lingering animosity. The Korean War ended with an armistice, not a peace treaty, which means the Korean Peninsula remains in a technical state of war.

President Donald Trump is seen as seeking to examine all options — including military ones — for halting the North's weapons programs before Pyongyang becomes capable of threatening the U.S. mainland.

Tillerson declared an end to the policy "strategic patience" of the Obama administration, which held off negotiating with Pyongyang while tightening of sanctions but failed to prevent North Korea's weapons development. Tillerson said U.S was exploring "a new range of diplomatic, security and economic measures."

Central to the U.S. review is China and its role in any bid to persuade Pyongyang to change course. China remains the North's most powerful ally. Tillerson will meet with top Chinese officials including President Xi Jinping in Beijing this weekend.

While the U.S. and its allies in Seoul and Tokyo implore Beijing to press its economic leverage over North Korea, the Chinese have emphasized their desire to relaunch diplomatic talks.

Tillerson, however, said that "20 years of talks with North Korea have brought us to where we are today."

"It's important that the leadership of North Korea realize that their current pathway of nuclear weapons and escalating threats will not lead to their objective of security and economic development. That pathway can only be achieved by denuclearizing, giving up their weapons of mass destruction, and only then will we be prepared to engage with them in talks," he said.

Six-nation aid-for-disarmament talks with North Korea, which were hosted by China, have in fact been stalled since 2009. The Obama administration refused to resume them unless the North re-committed to the goal of denuclearization, something that North Korea has shown little interest in doing.

He also accused China of economic retaliation against South Korea over the U.S. deployment of a missile defense system. He called that reaction "inappropriate and troubling" and said China should focus on the North Korean threat that makes the deployment necessary. China sees the system as a threat to its own security.

Last week, North Korea launched four missiles into seas off Japan, in an apparent reaction to major annual military drills the U.S. is currently conducting with South Korea. Pyongyang claims the drills are a rehearsal for invasion.

How to fix a howitzer: US offers help line to Ukraine troops

A group of U.S. and allied troops and contractors is using phones and tablets to provide maintenance advice to Ukrainian troops on the battlefield.

Abdul Wasi Safi, who fled Afghanistan following the withdrawal of U.S. forces, was freed this week after spending months in immigration detention.

How troops can watch the NFL Playoffs for free