Duffel Blog's biting satire has been making the military and veteran communities laugh at the absurdity of military life for years. Now they're coming to a bookshelf or a first sergeant's office near you.

Mission Accomplished: The Very Best of Duffel Blog is comprised of a hundred of the best Duffel Blog stories, hand-picked by contributors, along with additional commentary from creator, Paul Szoldra, and a foreword by Terminal Lance creator Maximillian Uriarte. 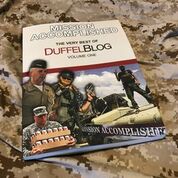 Mission Accomplished: The Very Best of Duffel Blog
Photo Credit: null
Five years after Duffel Blog’s March 4, 2012, launch, the site has published more than 2,000 stories written by over 100 contributors and now draws in more than 1 million visitors monthly. The contributors come from backgrounds that extend across all branches of service, men and women, some are active duty, others are veterans.

"It runs the gamut of experiences in the military," says Szoldra. "There’s no way that Duffel Blog would still be around five years later if it weren’t for such awesome contributors."

"I came up with a business idea for helping military members in their transition from active duty to college. I felt like that was a process that was tough for me and I thought maybe I could do something there."

"I didn’t think that I would have a company and a website that a whole lot of military members love. I just thought ‘I’m going to start this website and it’s going to be fun for me. At least it will make me laugh and maybe a few service members here or there.’"

Szoldra served as a Marine Corps infantryman and as an instructor at the School of Infantry-West in California.

"I don’t know the hell of a staff officer formatting PowerPoints eight hours a day, but there are plenty of people that do and they’re writing those experiences which plenty of officers in the Pentagon read it and think ‘Oh my God, this is the greatest thing ever.’" 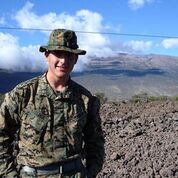 Paul Szoldra
Szoldra does have a favorite story, though he admitted that it was very hard to choose. "Dozens Wet After Coast Guard Cutter Capsizes Off Florida Coast" is riddled with the dry, underhanded humor that Duffel Blog is known for.

Duffel Blog has drawn the attention of everyone from Gen. James Mattis to an NCIS agent and even a confused Sen. Mitch McConnell, who infamously asked the Pentagon to check on a Duffel Blog story. McConnell wrote to the Pentagon's congressional liaison asking about Guantanamo Bay detainees receiving Post 9/11 GI Bill benefits. 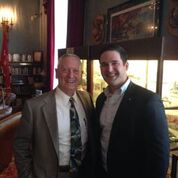 Gen. Mattis and Paul Szoldra
Photo Credit: null
"Mattis," Szoldra said, "has been one of our best high-profile boosters. We got a really awesome write-up in the Wall Street Journal in, I think, 2013, and he gave a quote praising us for lending some levity to the national security situation."

Mattis has gone so far as to add "frequently satirized by Duffel Blog" to his bio while at Stanford’s Hoover Institution.

"He was just the best person," Szoldra said. "And the person you would least want this to happen to. I wanted to give him this."

Mackenzie Wolf is an editorial intern for Military Times.