By Matthew Pennington, The Associated Press

WASHINGTON — As America's 16-year war in Afghanistan drags on, Russia is resurrecting its own interest in the "graveyard of empires." The jockeying includes engaging the Taliban and leading a new diplomatic effort to tackle Afghanistan's future, all while Washington leaves the world guessing on its strategy for ending the conflict.

Uncertain of Moscow's intentions, the Trump administration will stay away when Russia hosts regional powers China, India, Iran and Pakistan, and several Central Asian countries, for another set of Afghan talks next month. Afghanistan's government is attending, but the U.S. declined an invitation, saying it wasn't consulted ahead of time. No one has invited the Taliban.

For Russia, dogged by memories of the Soviet Union's disastrous, 1980s occupation of Afghanistan, it's a surprising turn at the head of the country's proverbial peace table. And it coincides with the Kremlin's campaign to wield greater international authority at the U.S.' expense elsewhere, including intervening in Syria's war and pushing for a settlement on President Bashar Assad's and its own terms. Moscow even has sought to broker new Israeli-Palestinian negotiations, challenging Washington's grip on the Mideast peace process.

For the United States, the new Russian foray into Afghanistan may represent another worrying consequence of a perceived American retrenchment. The perception has intensified overseas as President Donald Trump formulates new policy. Since taking office, he has scarcely mentioned Afghanistan, the U.S. military's largest deployment in a war zone.

"Russia sees a gap and is trying to fill it," said Jonah Blank, a South Asia expert at the RAND Corp. "It's looking around for opportunities, for any place where it can expand its own influence and freedom to pursue its own interests, and undermine U.S. alliances and partnerships."

President Vladimir Putin's government is an unlikely peace broker in Afghanistan, but the Afghans are grappling with great uncertainty. 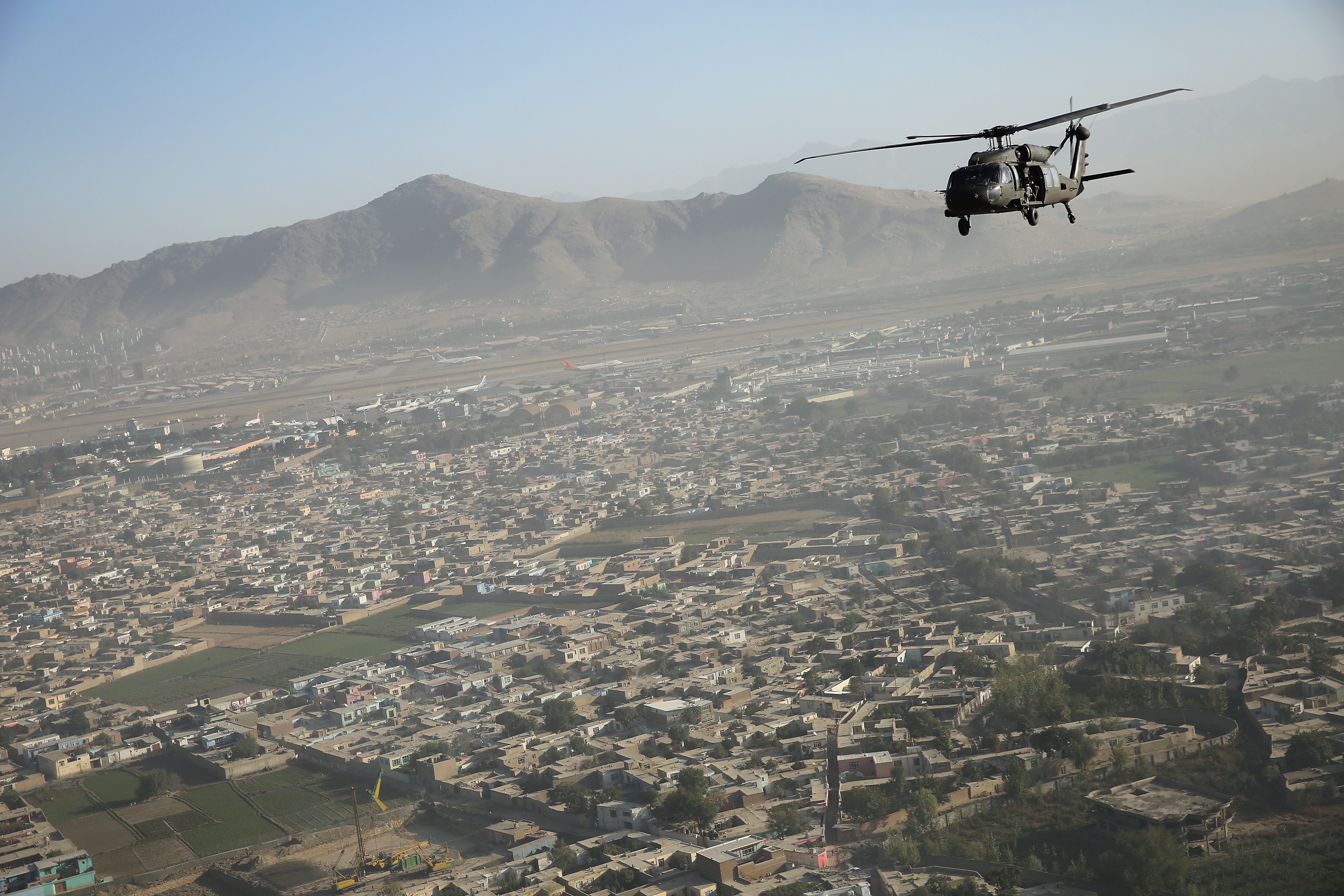 Photo Credit: Dan Kitwood/Getty Images
They're waiting to see if Washington sends more troops — as Gen. John Nicholson, top U.S. military commander in Afghanistan, advocates — or adjusts strategy amid increased Taliban attacks and Afghan military setbacks. In the past year, insurgents have sought to overrun several provincial capitals. Last week, they captured a southern district in Helmand province, which American and British troops fought bitterly to give to the government. The U.S. maintains 8,400 troops in Afghanistan, training local forces and conducting counterterrorism operations.

Moscow denies providing material support to the Taliban, which ruled Afghanistan until the U.S.-led invasion in 2001. Russia says contacts are limited to safeguarding security and getting the hardline religious fundamentalists to join a reconciliation effort with the government that Washington has failed for years to advance. Russia also has spoken of easing global sanctions on Taliban leaders who prove cooperative.

At its heart, Russia assesses Afghanistan's civil war fundamentally differently than the West. It often frames its suspicions of U.S. activity in terms evocative of the Great Game of the 1800s, when the British and Russian empires vied over Afghanistan and its neighbors, determined to shape the strategic land bridge linking Asia and the Mideast. And it has started seeing the Taliban as a largely local force, not an international jihadist threat, and a potential partner in combating Islamic State attempts to gain a foothold in Afghanistan.

"Where is Afghanistan and where is America?" Zamir Kabulov, the Kremlin's special envoy to Afghanistan, said in a January interview with Turkish media, likening U.S. bases in the country to Russia deploying troops to Mexico. The comparison may be somewhat strained. Russia's frontier is several hundred miles from Afghanistan; the U.S. shares a nearly 2,000-mile border with Mexico, its southern neighbor.

While the Russians are primarily concerned about Afghanistan destabilizing their own periphery, they may also be trying to boost their diplomatic profile and strengthen bonds in Asia. Its eastward push has accelerated as ties with the U.S. and Europe have soured over the 2014 annexation of Ukraine's Crimea region and allegations of meddling in the American presidential election.

Russia has improved once cool relations with Pakistan, where Taliban leaders have sought sanctuary. And it has increasingly tightened political and economic coordination with China.

"People are frustrated that Afghanistan is not stabilizing. The whole region is suffering," Pakistan's ambassador to Washington, Aizaz Ahmad Chaudhry, said Wednesday. But he said U.S. leadership was preferable.

"Any country recognizing or differentiating between good terrorists and bad terrorists is making ... a major mistake," Homayun Qayoumi, a top aide to Afghan President Ashraf Ghani, told a Washington audience this month.

Russia may be making some diplomatic progress. After visiting Moscow this month, Hanif Atmar, Afghanistan's national security adviser, said he received assurances Russia was promoting reconciliation and not providing military support. "We welcome and value such (an) approach," Atmar told the Interfax news agency.

Gen. Curtis Scaparrotti, the top U.S. general in Europe, became the latest senior military official to accuse Moscow of undermining U.S. and NATO allies in Afghanistan, warning a congressional hearing last week of expanding Russian influence on the Taliban. Russia may be supplying the insurgents, he said.

Although Washington is sitting out the upcoming Moscow conference, the State Department still wants to work with Russia and others to encourage peace. Secretary of State Rex Tillerson will discuss the matter in Russia's capital next month.

Despite their differences, the former Cold War foes both seek lower violence in Afghanistan and fewer exports of illicit drugs. Since 2001, the U.S. military has combated groups threatening to Russia and its neighbors. For several years, Russia facilitated a vital supply route for Western forces.

Of the Russians, Andrew Kuchins at Georgetown University said: "They want to be in the game for whatever the resolution is in Afghanistan."