The Rodong Sinmun, the official newspaper of the North's ruling Workers' Party, did not mince its words. 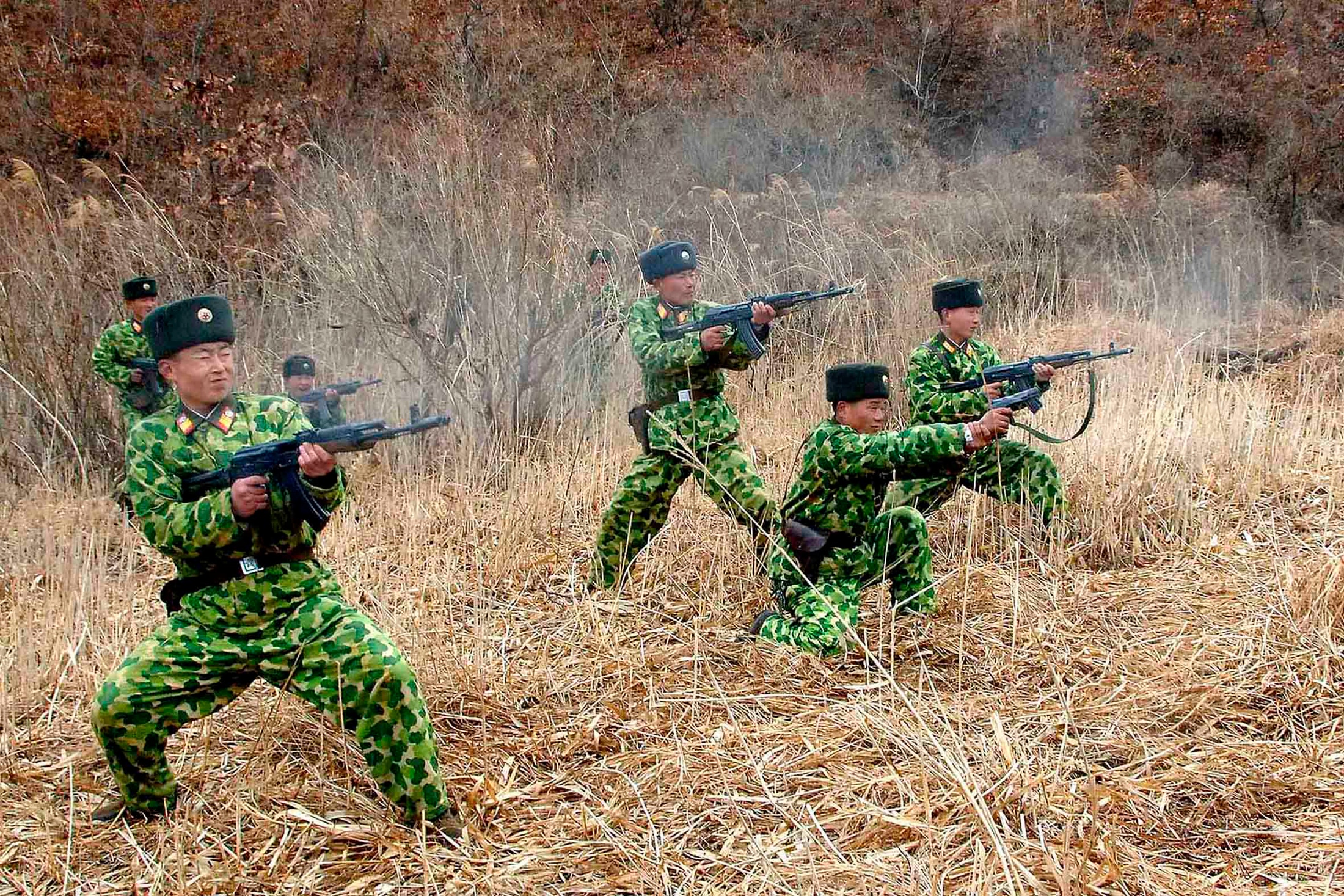 North Korean soldiers with weapons attend military training in an undisclosed location.
Photo Credit: KCNA/Reuters
"In the case of our super-mighty preemptive strike being launched, it will completely and immediately wipe out not only U.S. imperialists' invasion forces in South Korea and its surrounding areas but the U.S. mainland and reduce them to ashes," it said.

Reclusive North Korea regularly threatens to destroy Japan, South Korea and the United States and has shown no let-up in its belligerence after a failed missile test on Sunday, a day after putting on a huge display of missiles at a parade in Pyongyang.

"We're reviewing all the status of North Korea, both in terms of state sponsorship of terrorism as well as the other ways in which we can bring pressure on the regime in Pyongyang to re-engage with us, but re-engage with us on a different footing than past talks have been held," Tillerson told reporters in Washington on Wednesday.

U.S. Vice President Mike Pence, on a tour of Asian allies, has said repeatedly an "era of strategic patience" with North Korea is over.

U.S. House of Representatives Speaker Paul Ryan said during a visit to London the military option must be part of the pressure brought to bear. 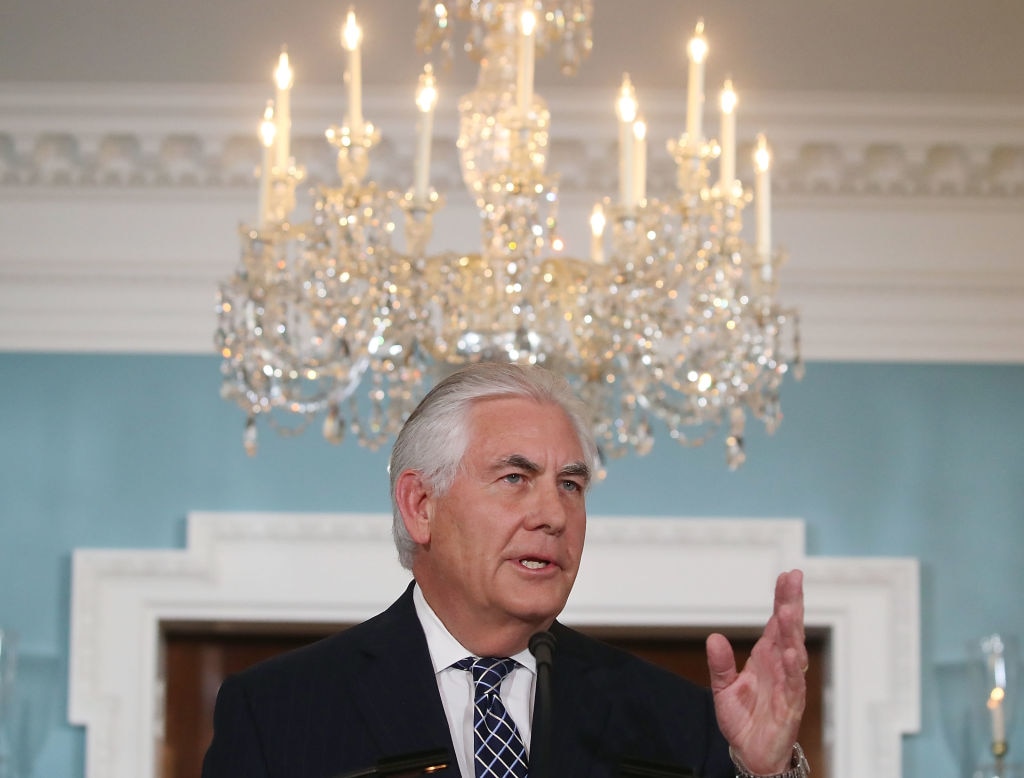 U.S. Secretary of State Rex Tillerson speaks about Iran and North Korea after reading a statement at the State Department, on April 19, 2017 in Washington, DC.
Photo Credit: Mark Wilson/Getty Images
"Allowing this dictator to have that kind of power is not something that civilised nations can allow to happen," he said in reference to Kim.

Ryan said he was encouraged by the results of efforts to work with China to reduce tension, but that it was unacceptable North Korea might be able to strike allies with nuclear weapons.

North and South Korea are technically still at war because their 1950-53 conflict ended in a truce, not a peace treaty.

South Korea's acting president, Hwang Kyo-ahn, at a meeting with top officials on Thursday, repeatedly called for the military and security ministries to maintain vigilance.

"We are conducting a practical and more intensive exercise than ever," South Korean pilot Colonel Lee Bum-chul told reporters. "Through this exercise, I am sure we can deter war and remove our enemy's intention to provoke us."

South Korean presidential candidates clashed on Wednesday night in a debate over the planned deployment in South Korea of a U.S.-supplied Terminal High Altitude Area Defense (THAAD) anti-missile system, which has angered China.

Frontrunner Moon Jae-in was criticized for leaving his options open before the May 9 election.

On Monday, Hwang and Pence reaffirmed their plans to go ahead with the THAAD, but the decision will be up to the next South Korean president. For its part, China says the system's powerful radar is a threat to its security.

The North has said it has developed a missile that can strike the mainland United States, but officials and experts believe it is some time away from mastering the necessary technology, including miniaturising a nuclear warhead.

Diplomats said China had agreed to the statement.

Such statements by the 15-member council have to be agreed by consensus.

Previous statements denouncing missile launches "welcomed efforts by council members, as well as other states, to facilitate a peaceful and comprehensive solution through dialogue". The latest draft statement dropped "through dialogue" and Russia requested it be included again.

"When we requested to restore the agreed language that was of political importance and expressed commitment to continue to work on the draft ... the U.S. delegation without providing any explanations cancelled the work on the draft," the Russian U.N. mission said in a statement.

"Speaking with one voice is extremely important to the Security Council appropriately responding to the relevant issue on the peninsula," he told reporters.

There has been some confusion over the whereabouts of a U.S. aircraft carrier group after Trump said last week he had sent an "armada" as a warning to North Korea, even as the ships were still far from Korean waters.

The U.S. military's Pacific Command explained that the USS Carl Vinson strike group first had to complete a shorter-than-planned period of training with Australia. It was now heading for the Western Pacific as ordered, it said.

China's influential Global Times newspaper, which is published by the People's Daily, the Communist Party's official paper, wondered whether the misdirection was deliberate.

"The truth seems to be that the U.S. military and president jointly created fake news and it is without doubt a rare scandal in U.S. history, which will be bound to cripple Trump's and U.S. dignity," it said.