BEIRUT — Turkey, Iran and Russia on Thursday signed an agreement calling for the setting up of four "de-escalation zones" in war-torn Syria — the latest attempt to reduce violence in the Arab country — and said that President Bashar Assad's air force would halt flights over the designated areas in the country's north, center and south.

But as officials from the three countries that back rival sides in the conflict signed the agreement at the Syria cease-fire talks in Kazakhstan, some members of the Syrian opposition delegation shouted in protest and walked out of the conference room in Astana, the Kazakh capital. 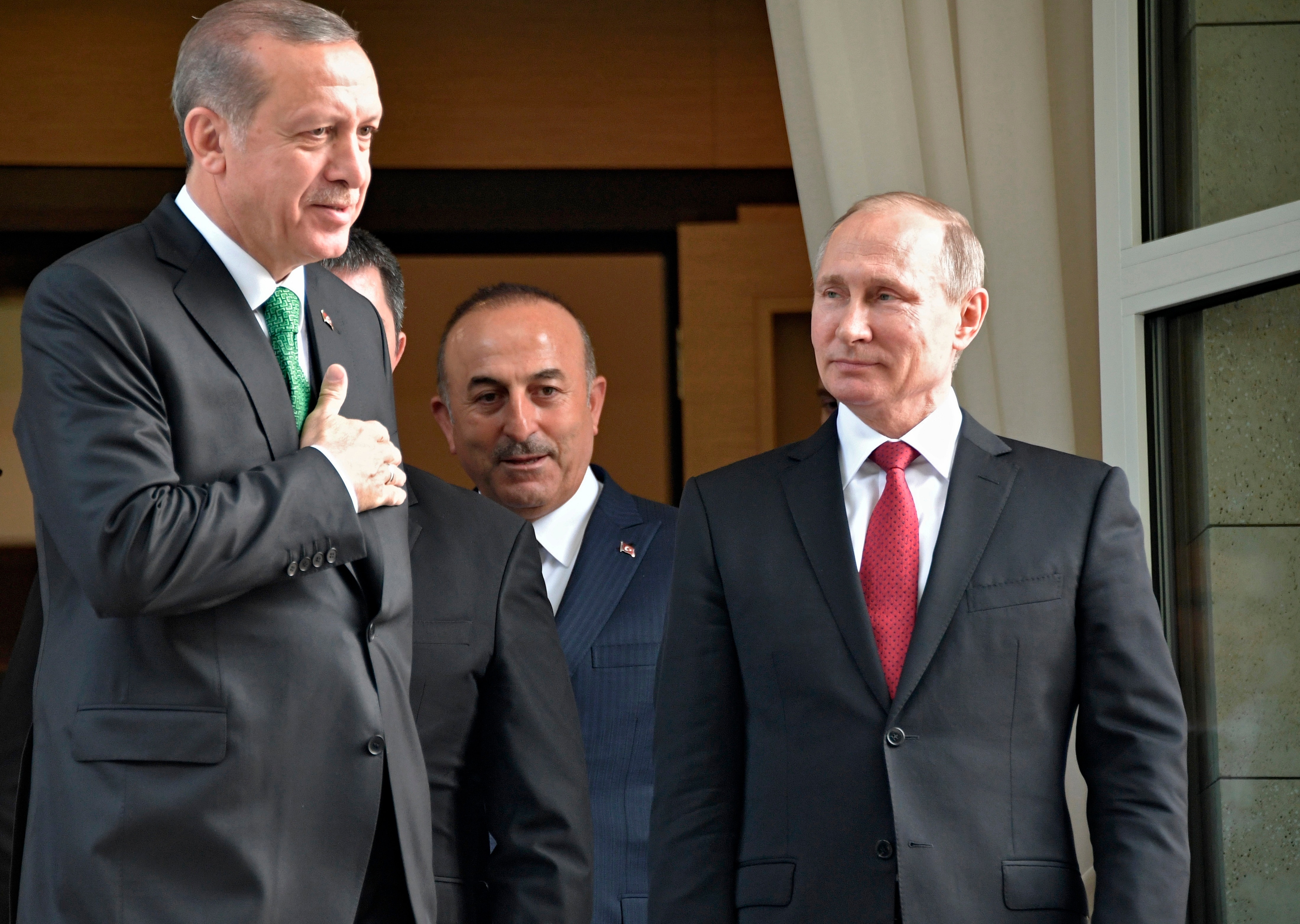 Turkish President Recep Tayyip Erdogan, left, says goodbye to Russian President Vladimir Putin, right, after their meeting in Putin's residence in the Russian Black Sea resort of Sochi, Russia, Wednesday, May 3, 2017. The presidents of Russia and Turkey held talks on the situation in Syria and also the restoration of full economic ties between their two countries.
Photo Credit: Alexei Nikolsky/Sputnik, Kremlin Pool Photo via AP
The opposition is protesting Iran's participation at the conference and role as a guarantor of the agreement, accusing it of being a party in the war that has killed some 400,000 people and displaced half the country's population.

"Iran is a country that is killing the Syrian people and the killer cannot be the rescuer," said Abu Osama Golani, a rebel commander who attended the gathering in Astana.

The walkout and the comments underline the huge difficulties of implementing such a deal. The Syrian government has said that although it will abide by the agreement, it will continue fighting "terrorism" wherever it exists, parlance for most armed rebel groups fighting government troops.

A previous cease-fire agreement signed in Astana on Dec. 30 by Russia, Iran and Turkey helped reduce overall violence for several weeks but eventually collapsed. Other attempts at a cease-fire in Syria have ended in failure.

The presidents of Russia and Turkey as well as President Donald Trump have recently supported the idea of creating safe zones in Syria. Meeting in the Russian resort town of Sochi on Wednesday, Recep Tayyip Erdogan and Vladimir Putin expressed hope the Syrian government and rebels would adopt this latest proposal to "de-escalate" the conflict. 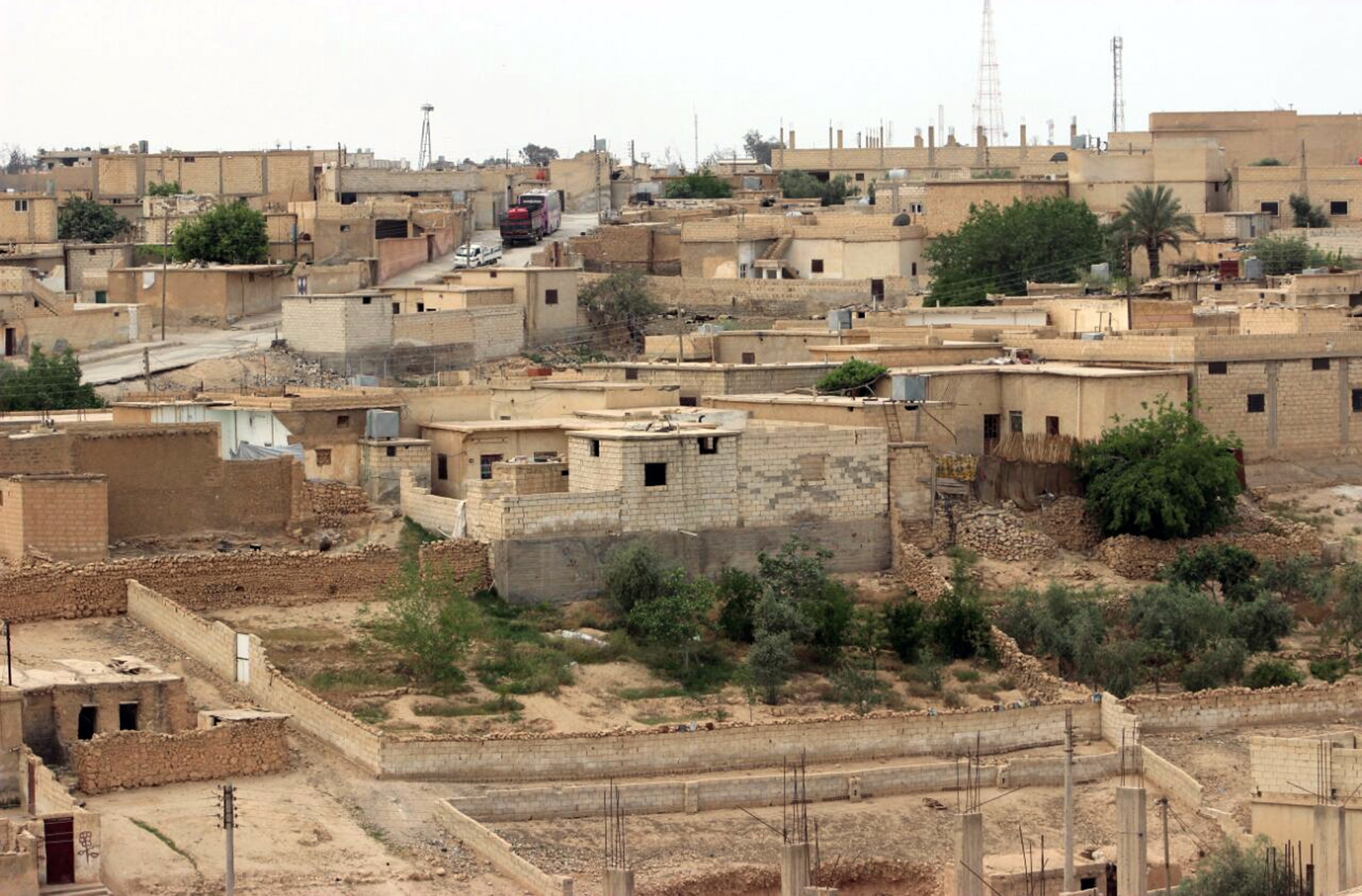 This Sunday, April 30, 2017 photo provided by the Syrian Democratic Forces (SDF), shows a general view of the northern town of Tabqa, Syria. U.S.-backed fighters in Syria have captured more territory from the Islamic State group in Tabqa. The town lies about 40 kilometers, or 25 miles, southeast of the Islamic State group's de facto capital, Raqqa, and is an important stronghold for the militants
Photo Credit: Syrian Democratic Forces, via AP
Putin said Russian and Syrian government jets would halt flights over the specified zones if all sides respect the cease-fire.

The Kazakhstan agreement calls for delineating zones where front lines between the Syrian government forces and the rebels would be frozen and fighting halted.

The zones include the provinces of Idlib, areas north of Homs, the eastern Ghouta suburbs outside Damascus, and an area in the south of the country, according to a statement leaked by the rebels on Wednesday.

Details of the agreement, however, were not immediately made public and Turkey's foreign ministry suggested the scope was wider and would include the whole of Idlib province; parts of Lattakia, Aleppo and Hama provinces; parts of Homs province; parts of Damascus and the East Ghouta region; and also parts of the southern Daraa and Quneitra provinces.

It was not clear how a cease-fire over such a broad, tangled area would be achieved, or whether international observers would be sent to Syria to monitor its implementation.

The head of Russia's delegation to the talks in Kazakhstan, Alexander Lavrentyev, said the Syrian government will abide by the agreement unless rebel groups inside those areas stage attacks.

"As of the sixth of this month all military operations will be ceased," the Russian official told journalists in Astana. "All Syrian flights over these areas will cease."

Lavrentyev said Turkey, Iran and Russia have agreed on the possibility of allowing international observers in case there is "unanimity" on that issue. He spoke at a press conference shortly after delegations of the three sponsor nations signed the agreement in the presence of the U.N. Syria envoy, Stafan de Mistura.

Military operations are likely to continue against members of al-Qaida-linked group known as the Levant Liberation Committee, which is active in areas where the fours zones are meant to be.

Iran and Russia have been among the strongest backers of Assad while Turkey is a main supporter of opposition groups that have been trying to remove him from power. Turkey and Russia are deeply entangled in the war in Syria, with each country having troops on the ground there.

Osama Abu Zayd, a spokesman for the Syrian military factions in Astana said the zones raise "a number of questions," adding that Moscow still has no answers on how to deal with any violations from its ally Damascus or from Iran, which has a number of fighters on the ground in Syria on the government's side.

"If this (negotiating) table does not lead to solutions, we will return to the gun," he said.