By Juan Zamorano and Kathia Martinez
FILE - In this Aug. 31, 1989 file photo, Gen. Manuel Antonio Noriega waves to newsmen after a state council meeting, at the presidential palace in Panama City, where they announced the new president of the republic. Panama's ex-dictator Noriega died Monday, May 29, 2017, in a hospital in Panama City. He was 83. (AP Photo/Matias Recart, File)

Panamanian President Juan Carlos Varela wrote in his Twitter account that "the death of Manuel A. Noriega closes a chapter in our history."

Varela added: "His daughters and his relatives deserve to mourn in peace."

Noriega ruled with an iron fist, ordering the deaths of those who opposed him and maintaining a murky, close and conflictive relationship with the United States.

After his downfall, Noriega served a 17-year drug sentence in the United States, then was sent to face charges in France. He spent all but the last few months of his final years in a Panamanian prison for murder of political opponents during his 1983-89 regime.

He accused Washington of a conspiracy to keep him behind bars and tied his legal troubles to his refusal to cooperate with a U.S. plan aimed at toppling Nicaragua's leftist Sandinista government in the 1980s.

Ezra Angel, a lawyer for Noriega, said Tuesday there was no official word on what caused his death.


"We are asking for the family to be given space to say goodbye to their father in peace and tranquility," Angel told The Associated Press.

In 2016, doctors detected the rapid growth of a benign brain tumor that had first been spotted four years earlier, and in January a court granted him house arrest to prepare for surgery on the tumor.

He is survived by his wife Felicidad and daughters Lorena, Thays and Sandra.

Following Noriega's ouster, Panama underwent huge changes, taking over the Panama Canal from U.S. control in 1999, vastly expanding the waterway, and enjoying a boom in tourism and real estate.

Today the Central American nation has little in common with the bombed-out neighborhoods where Noriega hid during the 1989 invasion, before being famously smoked out of his refuge at the Vatican Embassy by incessant, loud rock music blared by U.S. troops.

Known mockingly as "Pineapple Face" for his pockmarked complexion, Manuel Antonio Noriega was born poor in Panama City on Feb. 11, 1934, and was raised by foster parents.

He joined Panama's Defense Forces in 1962 and steadily rose through the ranks, mainly through loyalty to his mentor, Gen. Omar Torrijos, who became Panama's de facto leader after a 1968 coup. 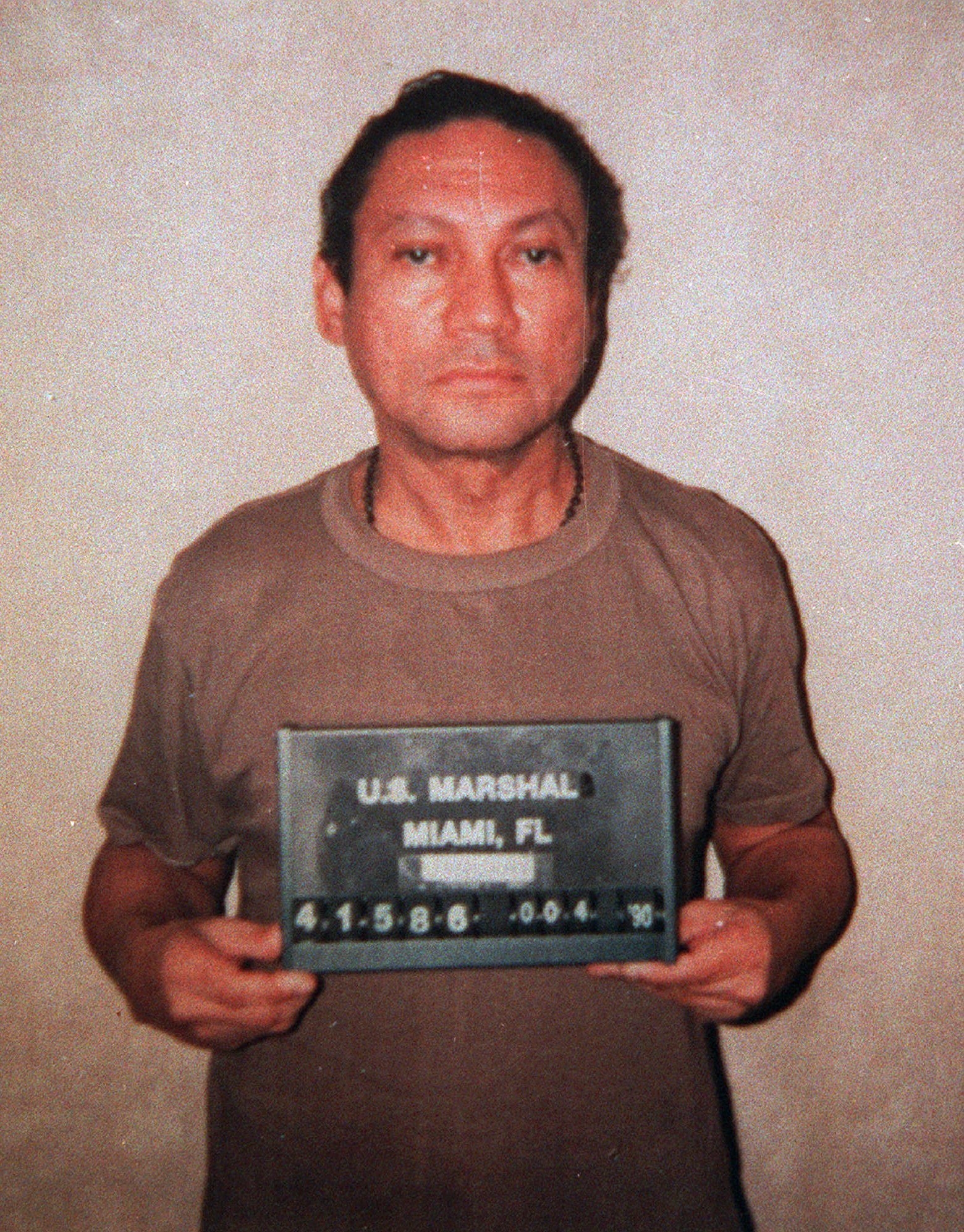 Noriega was considered a valued CIA asset and was paid millions of dollars for assistance to the U.S. throughout Latin America, including acting as a liaison to Cuban leader Fidel Castro.


Noriega also helped the U.S. seize drugs at sea and track money laundering in Panama's banks, and reported on guerrilla and terrorist activities.

Washington ultimately soured on him, especially after a top political opponent was killed in 1985 and Noriega appeared to join forces with Latin American drug traffickers. Foes in the Panamanian military attempted several coups but failed, and their leaders were summarily executed by firing squad.

The beginning of his downfall came in 1988 when federal grand juries in the Florida cities of Miami and Tampa indicted Noriega on drug-trafficking charges.

Initially he reacted with defiance at U.S. economic sanctions designed to drive him from power. He famously waved a machete at a rally while vowing not to leave, and in 1989 he nullified elections that observers say were handily won by the opposition.

U.S. President George H.W. Bush ordered the invasion in December 1989, and Noriega was captured and taken to Miami. During the operation, 23 U.S. military personnel died and 320 were wounded, and the Pentagon estimated 200 Panamanian civilians and 314 soldiers were killed.

The defense cited court documents describing him as the "CIA's man in Panama" and argued that the indictment "smells all the way from here to Washington."

Jurors convicted Noriega in April 1992 of eight of 10 charges. Under the judge's instructions, they were told not to consider the political side of the case — including whether the U.S. had the right to invade Panama and bring Noriega to trial in the first place.

During his years at a minimum-security federal prison outside Miami, Noriega got special prisoner of war treatment, allowed to wear his Panamanian military uniform and insignia when in court.

He lived in a bungalow apart from other inmates and had his own television and exercise equipment. He was said to be a TV news junkie and a voracious reader about politics and current events.

After completing his 17-year sentence in 2007, Noriega was extradited to France and received a seven-year sentence for money laundering.

But Panama wanted Noriega to return to face in-absentia convictions and two prison terms of 20 years for embezzlement, corruption and murder of opponents, including military commander Moises Giroldi, who led a failed rebellion on Oct. 3, 1989, and Hugo Spadafora, whose decapitated body was found in a mailbag on the border with Costa Rica in 1985.

In mid-2011, France approved his extradition to Panama.

Despite amassing great wealth, Noriega had worked hard to cultivate an image of a man of the people. He lived in a modest, two-story home in an upper-middle-class neighborhood in Panama City that stood in stark contrast with the opulent mansions customary among Latin American dictators.

"He would only say 'hello' very respectfully," said German Sanchez, who lived next door for 16 years. "You may think what you like of Noriega, but we can't say he was anything but respectful toward his neighbors."

"The humble, the poor, the blacks, they are the utmost authority," Noriega said in one speech.

While some resentment lingers over the U.S. invasion, Noriega has so few supporters in modern-day Panama that attempts to auction off his old home attracted no bidders and the government decided to demolish the decaying building.

"He is not a figure with political possibilities," University of Panama sociologist Raul Leis said in 2008. "Even though there's a small sector that yearns for the Noriega era, it is not a representative figure in the country."

Noriega broke a long silence in June 2015 when he made a statement from prison on Panamanian television to ask forgiveness of those harmed by his regime.

"I feel like as Christians we all have to forgive," he said, reading from a handwritten statement. "The Panamanian people have already overcome this period of dictatorship."

But for the most part Noriega stayed mum about elite military and civilian associates who thrived on the corruption that he helped instill — and which still plagues the Central American nation of some 3.9 million people, a favored transshipment point for drugs and a haven for money laundering.

"He kept his mouth shut and died for the sins of others," R.M. Koster, an American novelist and the biographer of Noriega, said in a 2014 interview. "Nobody else ever went to prison."

Meanwhile, families of more than 100 who were killed or disappeared during his rule are still seeking justice.

This week in Congress: Year-end deadlines loom large for lawmakers

Defense and veterans hearings on Capitol Hill for the week of Oct. 18, 2021.

A provision included in a draft of the annual defense authorization bill would look into a new system for troops to cast their votes online instead of through mailed-in paper ballots.

The total deaths have risen to 67.

The House Veterans' Affairs Committee on Wednesday held its first in a series of hearings on the issue of extremism in the veterans community.

The public will be able to walk up to the Tomb of the Unknown Soldier and lay flowers for the first time in nearly 100 years.

Military women say they face higher breast cancer rates from exposure, according to a feature reported by The War Horse.

A pilot in World War II, Korean War breaks the record as oldest to paraglide in America.

Gold Star spouses waiting on benefits must wait on line of duty investigations to receive them.

The wreck of a storied military ship that served in two World Wars, performed patrols in waters off Alaska for decades, and at one point was captained by the first Black man to command a U.S. government vessel has been found.

US vows to pay relatives of Afghans killed in drone strike

The U.S. Defense Department said that it is committed to offering condolence payments to relatives of the 10 people who were killed in an errant U.S. drone strike in Kabul, Afghanistan, in August.

General McConville: The Army, Industry, and The Next Steps in Modernization

Combined Russian and Chinese military power will approach, but not exceed US: report