US renews offer of Syria cooperation with Russia

By Matthew Lee, The Associated Press
A picture shows destroyed buildings in Aleppo's northwest Layramoun industrial district on July 5, 2017. Six months after Syria's army captured the country's one-time economic powerhouse, dozens of manufacturers with small and medium-sized factories are cautiously returning to the city's east, once a stronghold of opposition fighters. Syria's conflict has ravaged the country's economy since it began in March 2011 with anti-government protests, before spiralling into a complex war that has killed over 320,000 people. / AFP PHOTO / JOSEPH EID (Photo credit should read JOSEPH EID/AFP/Getty Images)

WASHINGTON — The Trump administration on Wednesday renewed an offer to cooperate with Russia in the Syrian conflict, including on military matters, ahead of President Trump's meeting with Russian leader Vladimir Putin later this week.

In a statement, Secretary of State Rex Tillerson said the U.S. is open to establishing no-fly zones in Syria in coordination with Russia as well as jointly setting up a truce monitoring and humanitarian aid delivery mechanism. The statement came as Trump prepared to meet with Putin on Friday in Germany and as the U.S. seeks to consolidate gains made against the Islamic State in recent weeks and prepare for a post-ISIS group future. 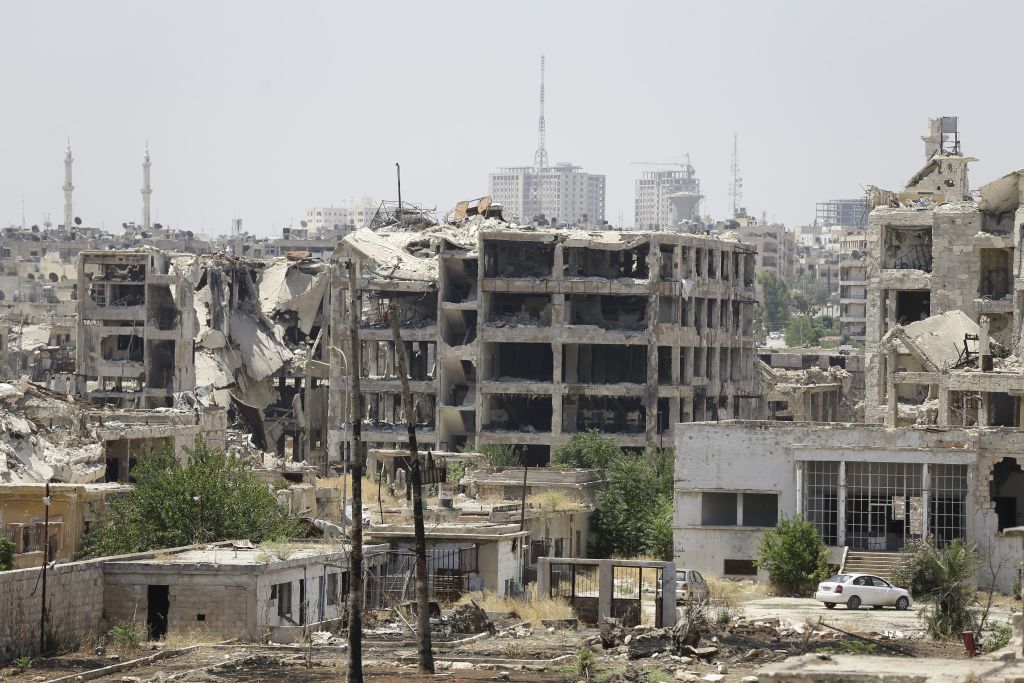 A picture shows destroyed buildings in Aleppo's northwest Layramoun industrial district on July 5, 2017. Six months after Syria's army captured the country's one-time economic powerhouse, dozens of manufacturers with small and medium-sized factories are cautiously returning to the city's east, once a stronghold of opposition fighters
Photo Credit: Joseph Eid/The Associated Press
Tillerson noted that the U.S. and Russia have a variety of unresolved differences but said Syria is an opportunity for the two countries to create stability in Syria. He said that the Islamic State had been "badly wounded" and may be on the "brink of complete defeat" as U.S.-backed forces continue their assault on the self-proclaimed ISIS capital of Raqqa. But he stressed that Russia has to play a constructive role.

"While there are no perfect options for guaranteeing stability, we must explore all possibilities for holding the line against the resurgence of ISIS or other terrorist groups," Tillerson said. "The United States and Russia certainly have unresolved differences on a number of issues, but we have the potential to appropriately coordinate in Syria in order to produce stability and serve our mutual security interests."

He said that Russia, as an ally of Syrian President Bashar Assad and a participant in the conflict, "has a responsibility to ensure that the needs of the Syrian people are met and that no faction in Syria illegitimately re-takes or occupies areas liberated from ISIS' or other terrorist groups' control." Tillerson added that Russia has "an obligation to prevent any further use of chemical weapons of any kind by the Assad regime."

The appeal echoed similar entreaties made to Putin by the Obama administration that were largely ignored by Moscow, but they came just two days ahead of Trump's first face-to-face meeting with the Russian leader that is set to take place on Friday on the sidelines of the G-20 summit in Hamburg, Germany.

And, the offer went beyond the Obama administration's offers, suggesting that cooperation in establishing no-fly zones was possible. Tillerson noted that despite differences, the U.S. and Russia are having success in avoiding accidents between American and Russian planes flying over an extremely complex conflict zone. Minor incidents, he said, had been dealt with "quickly and peacefully."

A displaced Syrian child, who fled the countryside surrounding the Islamic State group stronghold of Raqqa, carries her doll as she walks at a temporary camp in the village of Ain Issa on July 4, 2017

"This cooperation over de-confliction zones process is evidence that our two nations are capable of further progress," Tillerson said. "The United States is prepared to explore the possibility of establishing with Russia joint mechanisms for ensuring stability, including no-fly zones, on the ground ceasefire observers, and coordinated delivery of humanitarian assistance."

"If our two countries work together to establish stability on the ground, it will lay a foundation for progress on the settlement of Syria's political future," he said.

The Asset and Infrastructure Review Commission has a deadline of Jan. 31, 2023, to finish its work.