WASHINGTON — Arizona Sen. John McCain, a former prisoner of war in Vietnam who became one of the nation’s most prominent defense policy voices, passed away Saturday at the age of 81.

The onetime Navy pilot and longtime lawmaker was among the best known veterans in America, and has arguably been the most influential and consistent military advocate for the Republican Party over the last three decades.

His death not only leaves open a Republican seat in an already contentious Senate but also leaves an enormous hole in American political debate over the roles, responsibilities and challenges of the armed forces.

In an October 2017 speech to students at his alma mater — the Naval Academy — McCain commented that he had worked as a public servant nearly his entire adult life “sometimes unwittingly and often imperfectly.” He said the thought of helping promote America gave him a sense of purpose and honor.

“Even in the worst of times — and they come for most of us — you’ll know that to serve this country is to serve its ideals, the ideals that consider every child on Earth as made in the image of God and endowed with dignity and the rights to life, liberty and the pursuit of happiness,” he said. “It is a noble cause. It is your cause, and it’s worth living and dying for.” 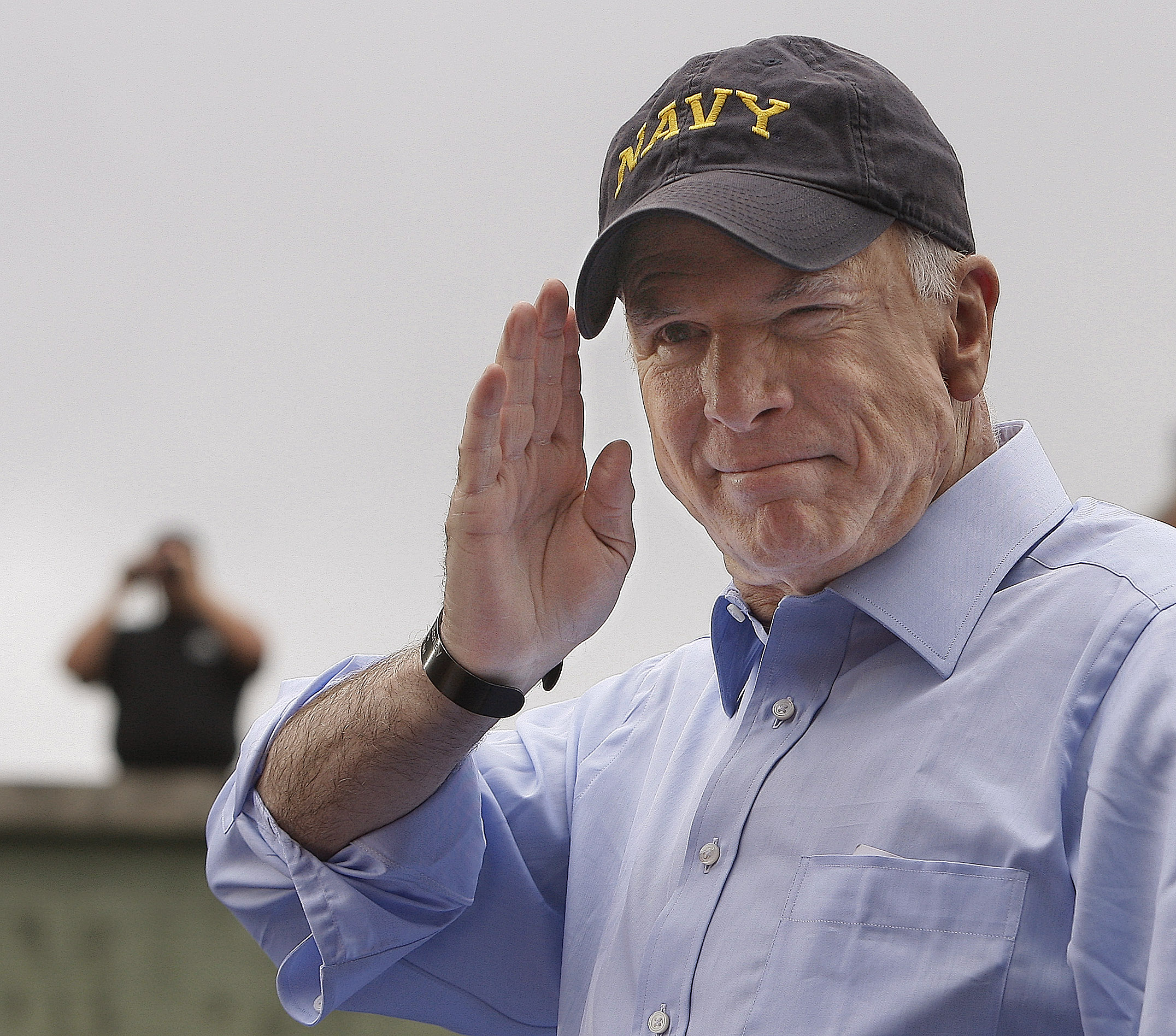 John McCain, the onetime Navy pilot and longtime lawmaker, was among the best known veterans in America, and has arguably been the most influential and consistent military advocate for the Republican party for the last three decades. (Stephan Savoia/AP)
2 of 15 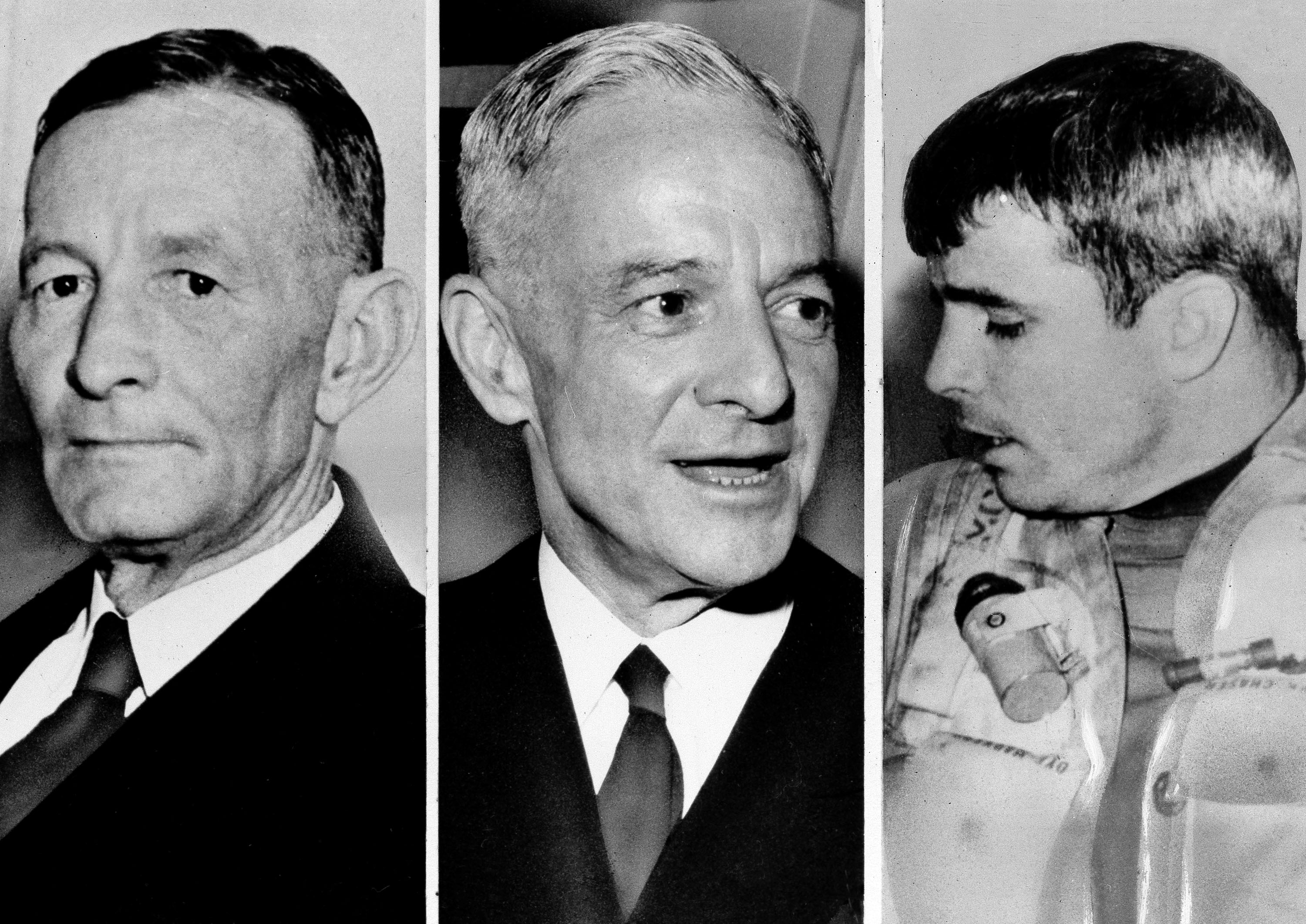 Lt. Cmdr. John McCain III, 30, right, shown in 1967, is a member of a famous U.S. Navy family and served as an aircraft carrier pilot. His father, John S. McCain Jr., center, served as the Navy's commander in chief in Europe. His grandfather, left, Adm. John S. McCain, commanded all U.S. aircraft carriers in the Pacific during World War II. (AP)
3 of 15 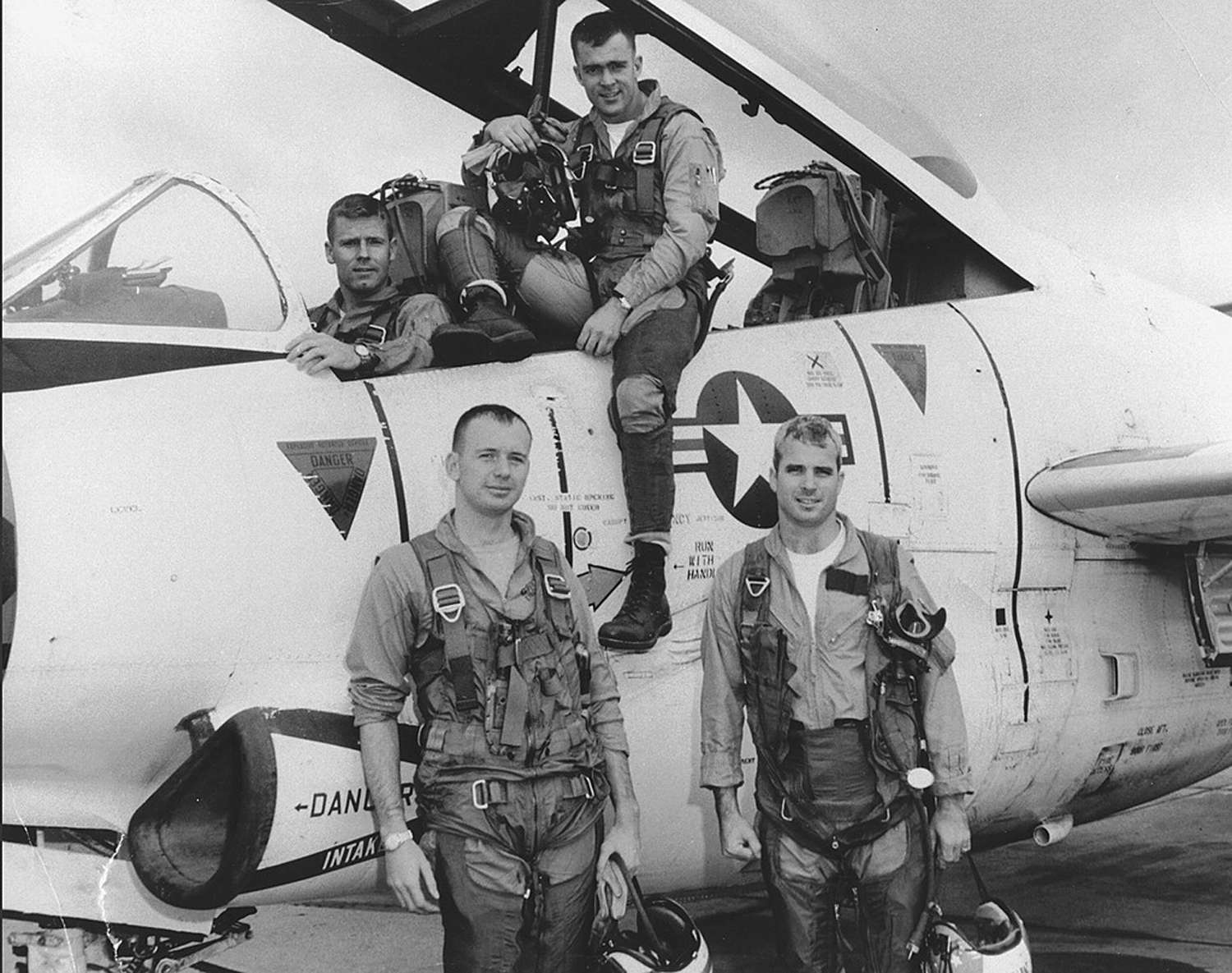 John McCain, front right, poses with his squadron in 1965. McCain has been awarded the Silver Star, Bronze Star, Legion of Merit, Purple Heart, Distinguished Flying Cross medal and the Prisoner of War medal. (Library of Congress via AP)
4 of 15 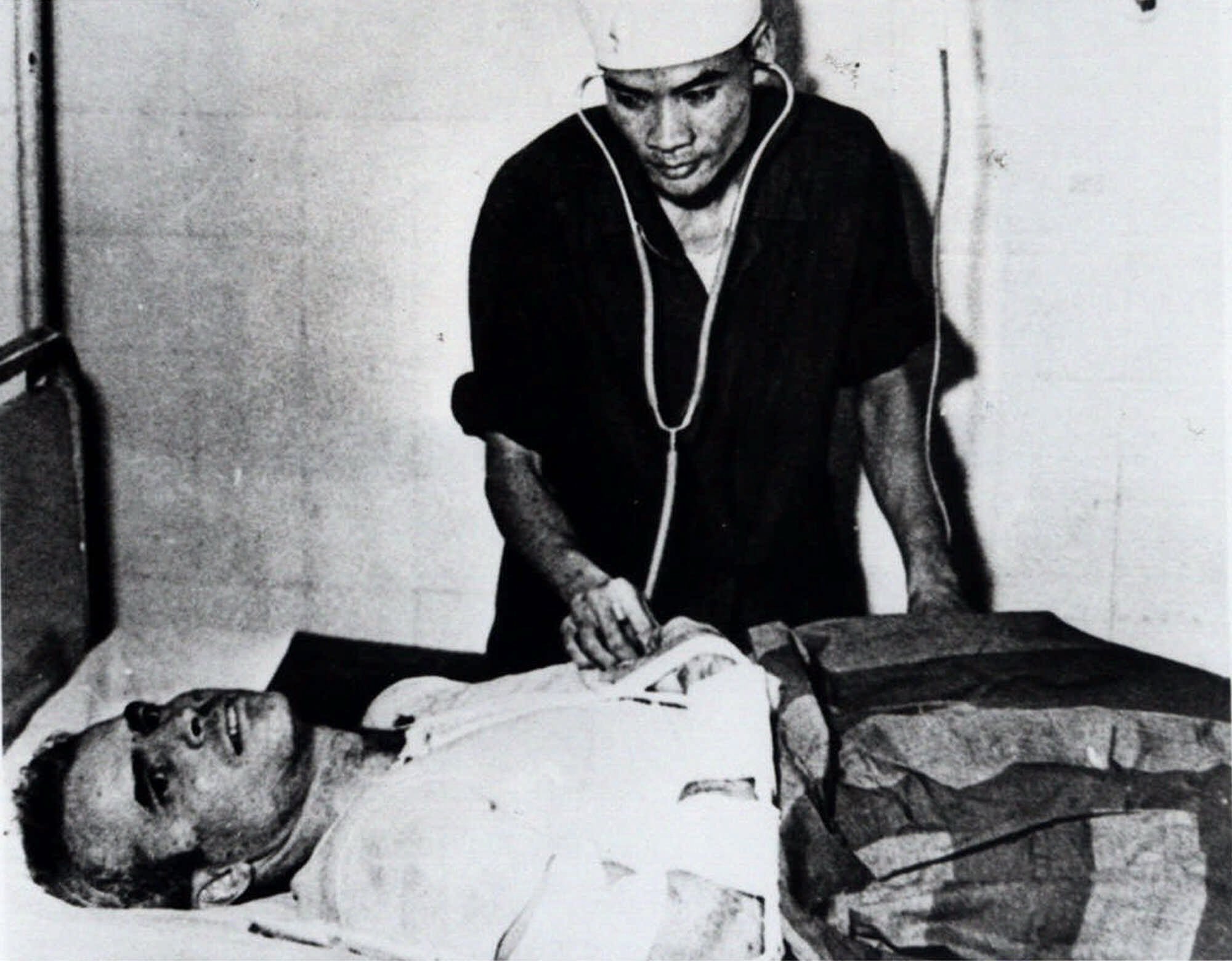 John McCain is administered to a Hanoi, Vietnam, hospital as a prisoner of war in the fall of 1967. McCain spent 20 years in the U.S. Navy, a quarter of it in a Vietnamese POW camp after his jet was shot down over Hanoi during an Oct. 26, 1967, bombing mission. (AP)
5 of 15 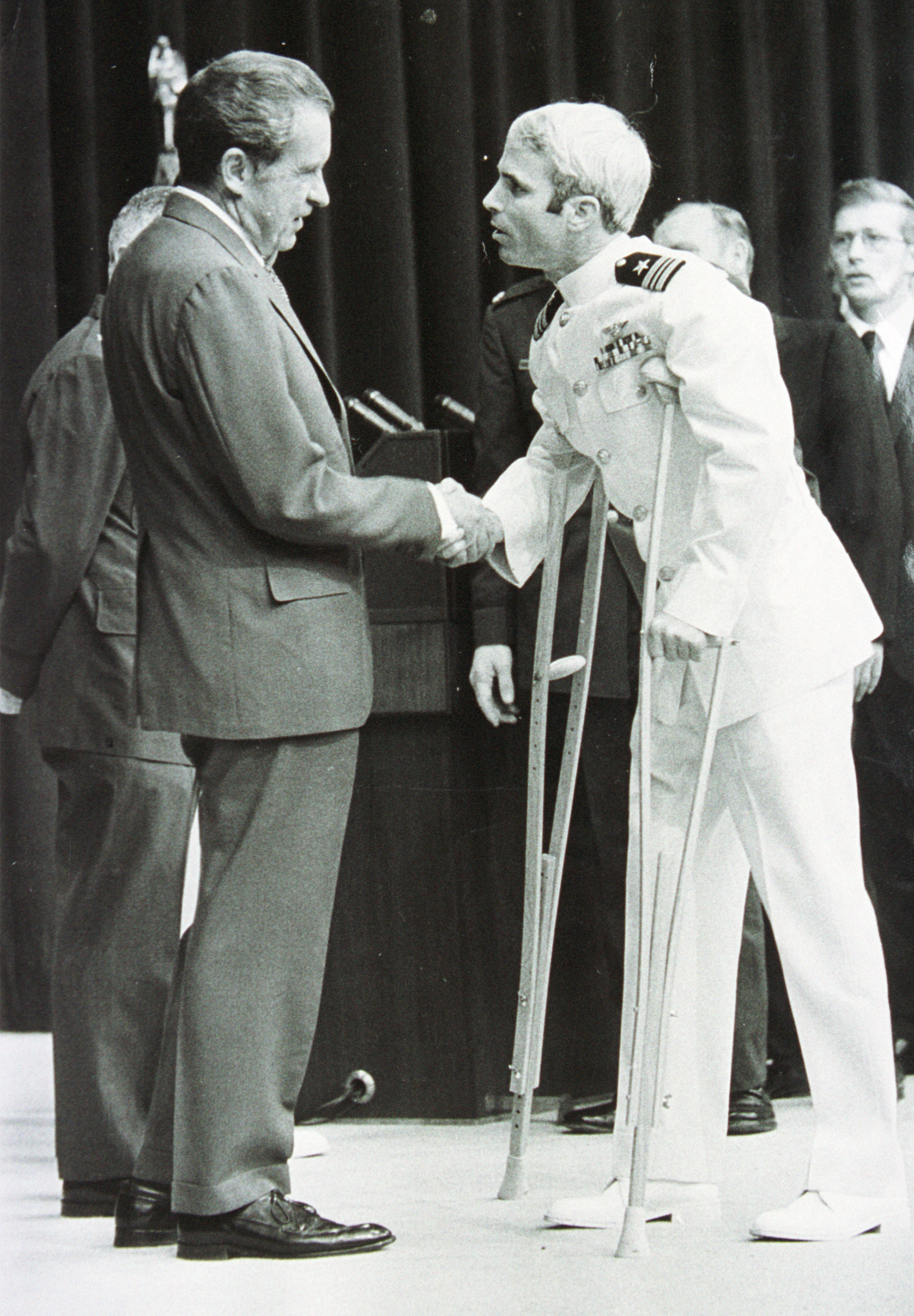 Lt. Cmdr. John McCain is welcomed by U.S. President Richard Nixon on May 24, 1973, in Washington, D.C., upon McCain's release from a POW camp during the Vietnam War. (Getty Images)
6 of 15 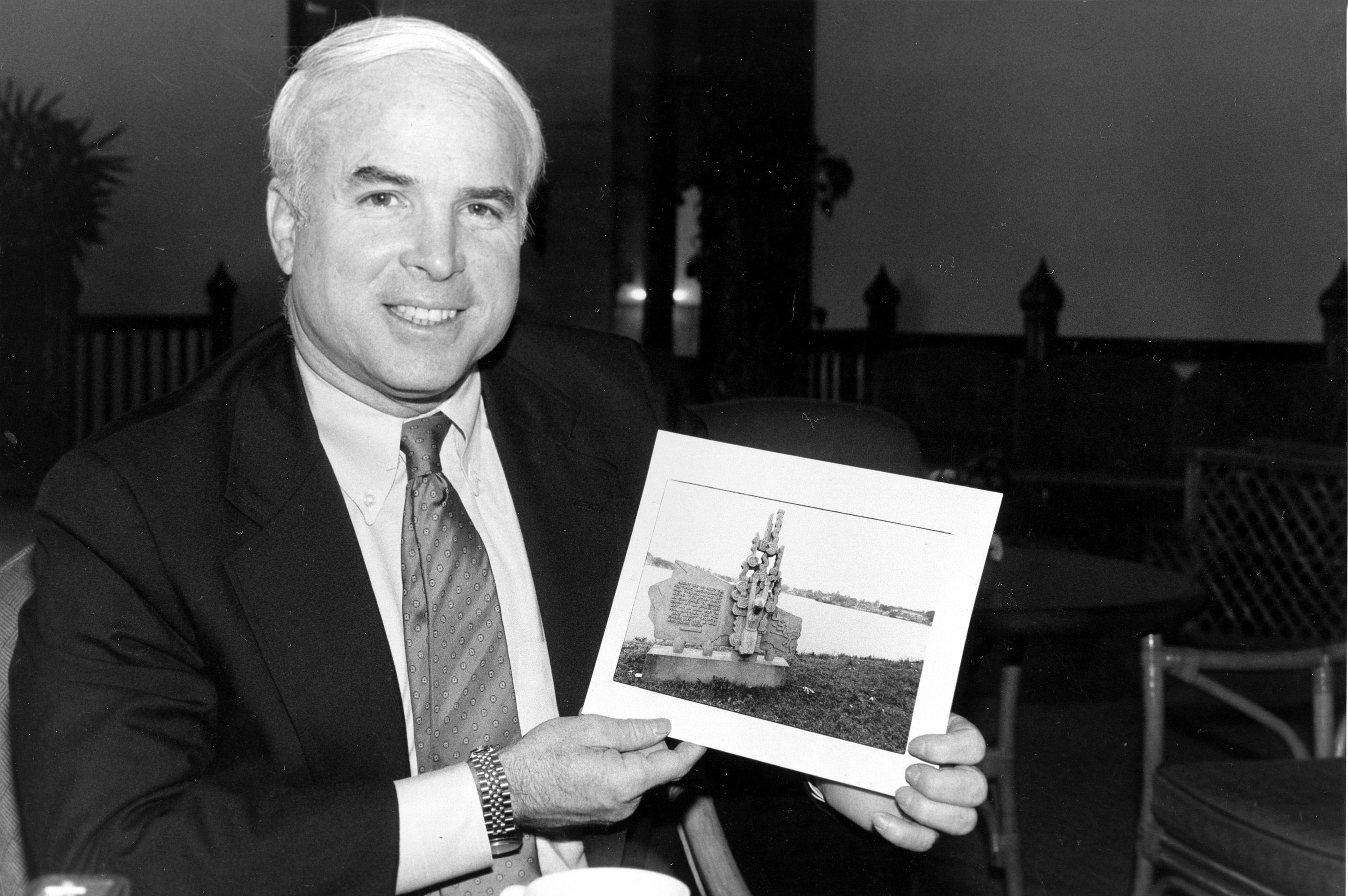 Rep. John McCain, R-Ariz., holds a photo of a marker in Hanoi at Truc Bach Lake where he parachuted after being shot down as a Navy pilot in the Vietnam War. He was elected to the U.S. House of Representatives in 1982. (Jim Bourdier/AP)
7 of 15 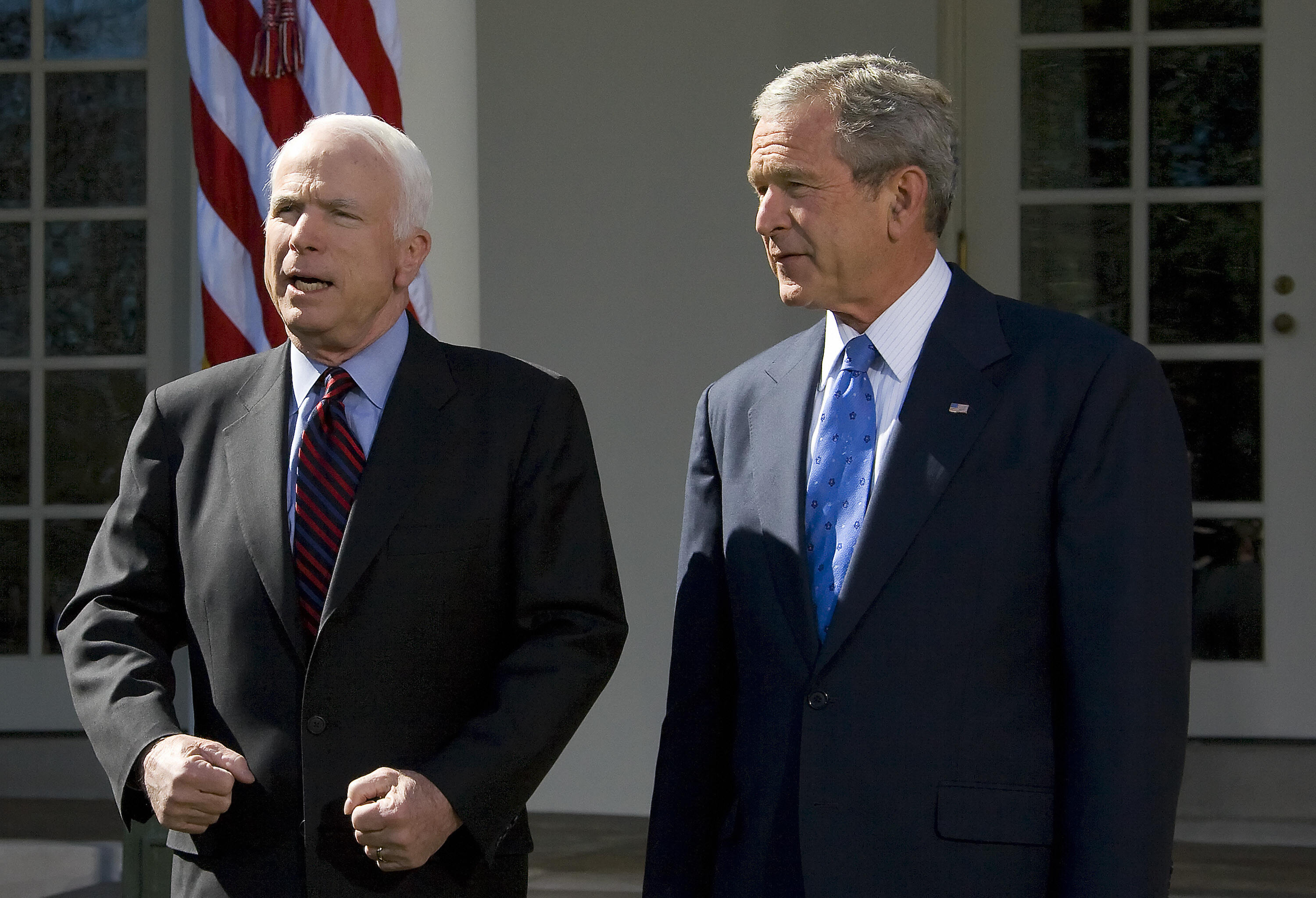 U.S. President George W. Bush, right, listens after endorsing Republican presidential candidate John McCain in the Rose Garden of the White House on March 5, 2008. McCain had lost to Bush for the presidency in 2000. (Jim Watson/AFP via Getty Images)
8 of 15 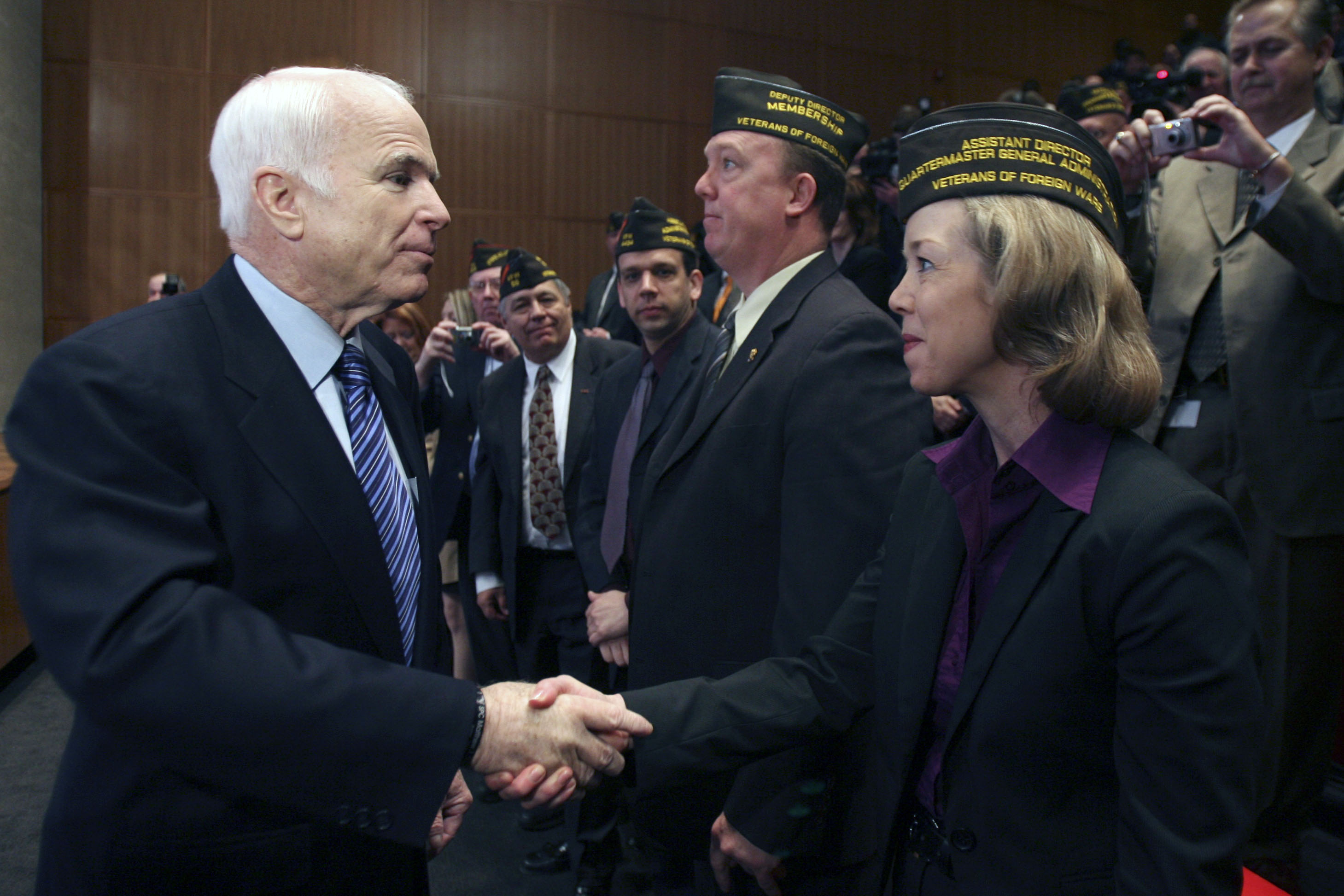 Sen. John McCain, R-Ariz., left, greets veterans who were in the audience after delivering a speech at the National World War I Museum on April 7, 2008, in Kansas City, Mo. (Mary Altaffer/AP)
9 of 15 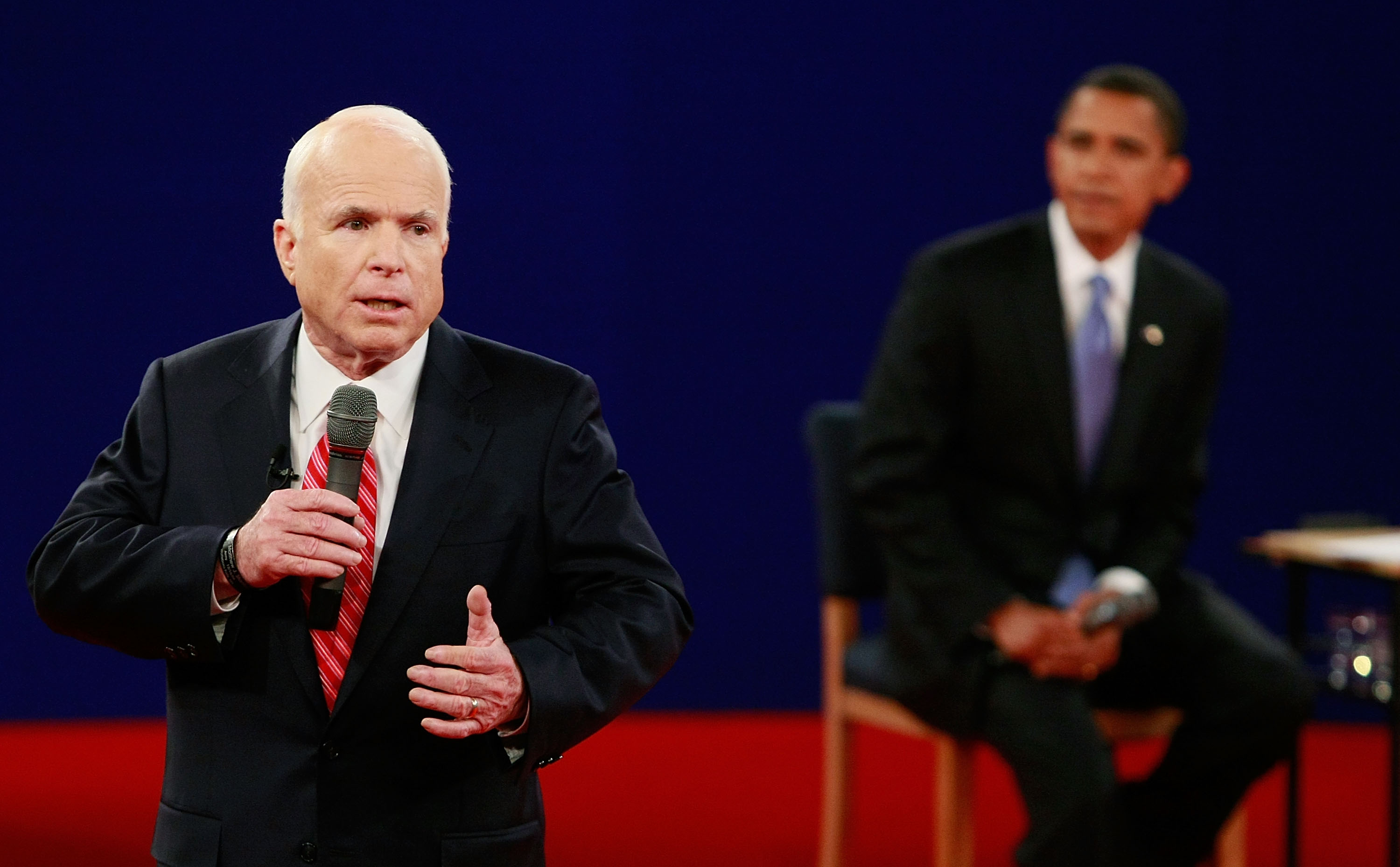 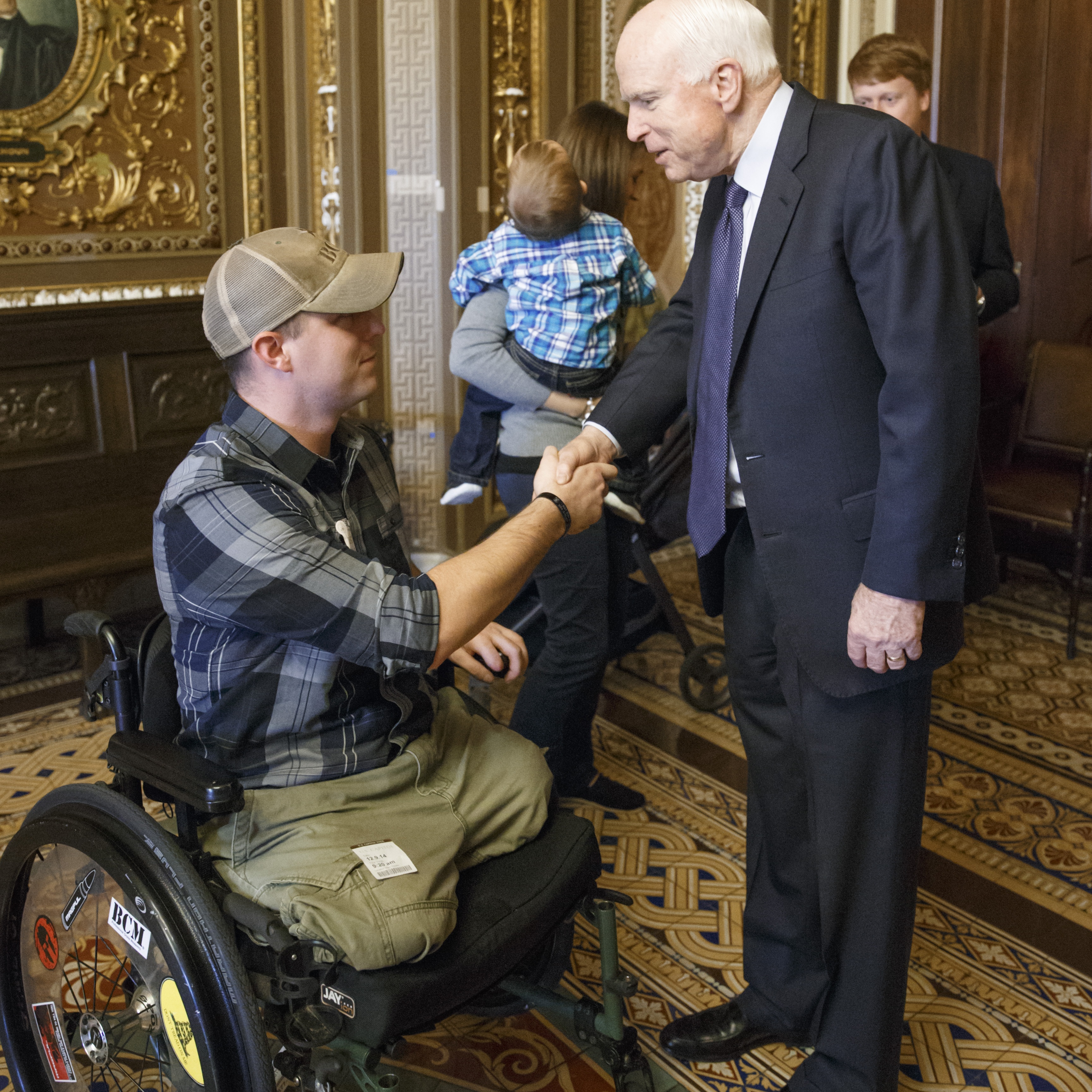 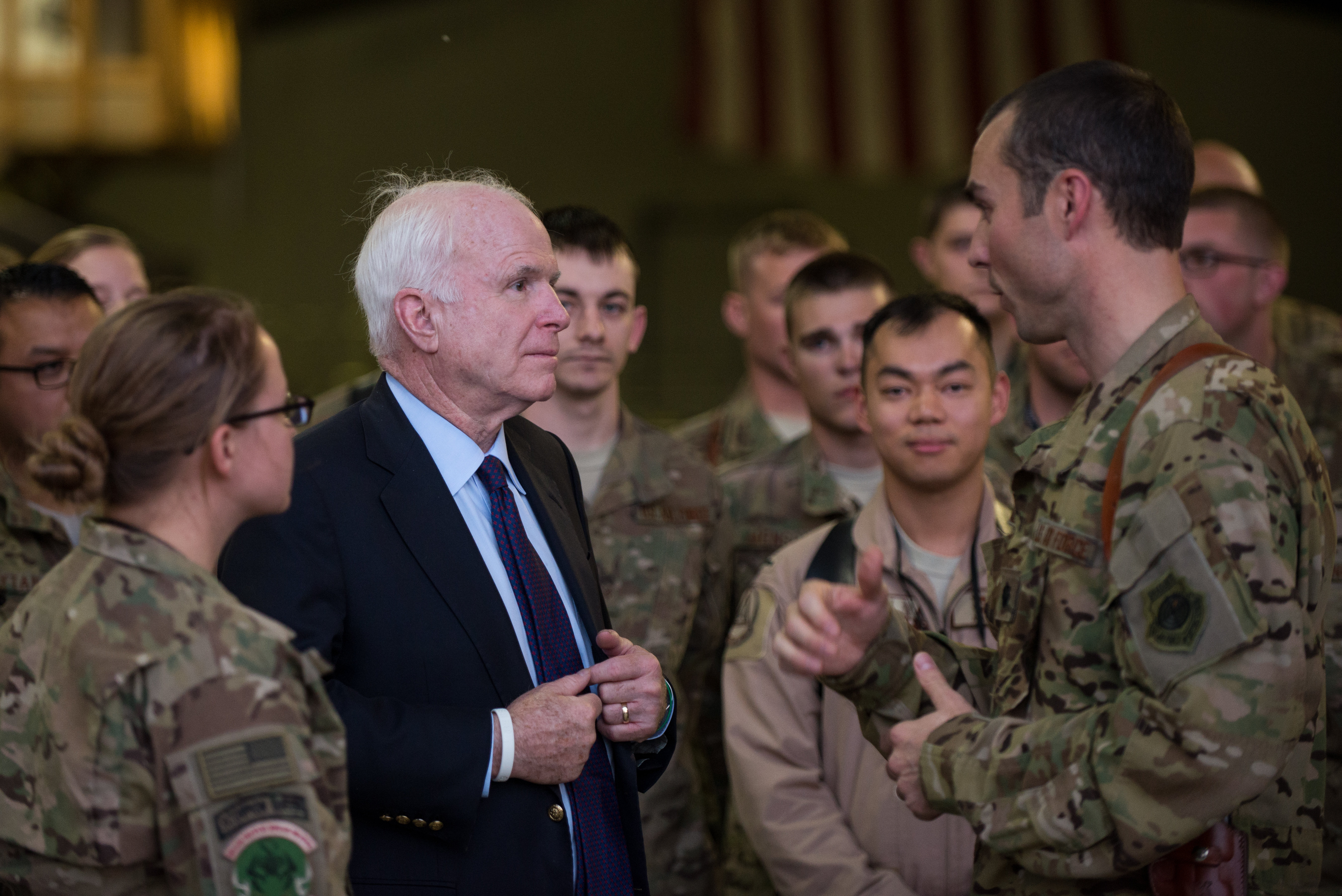 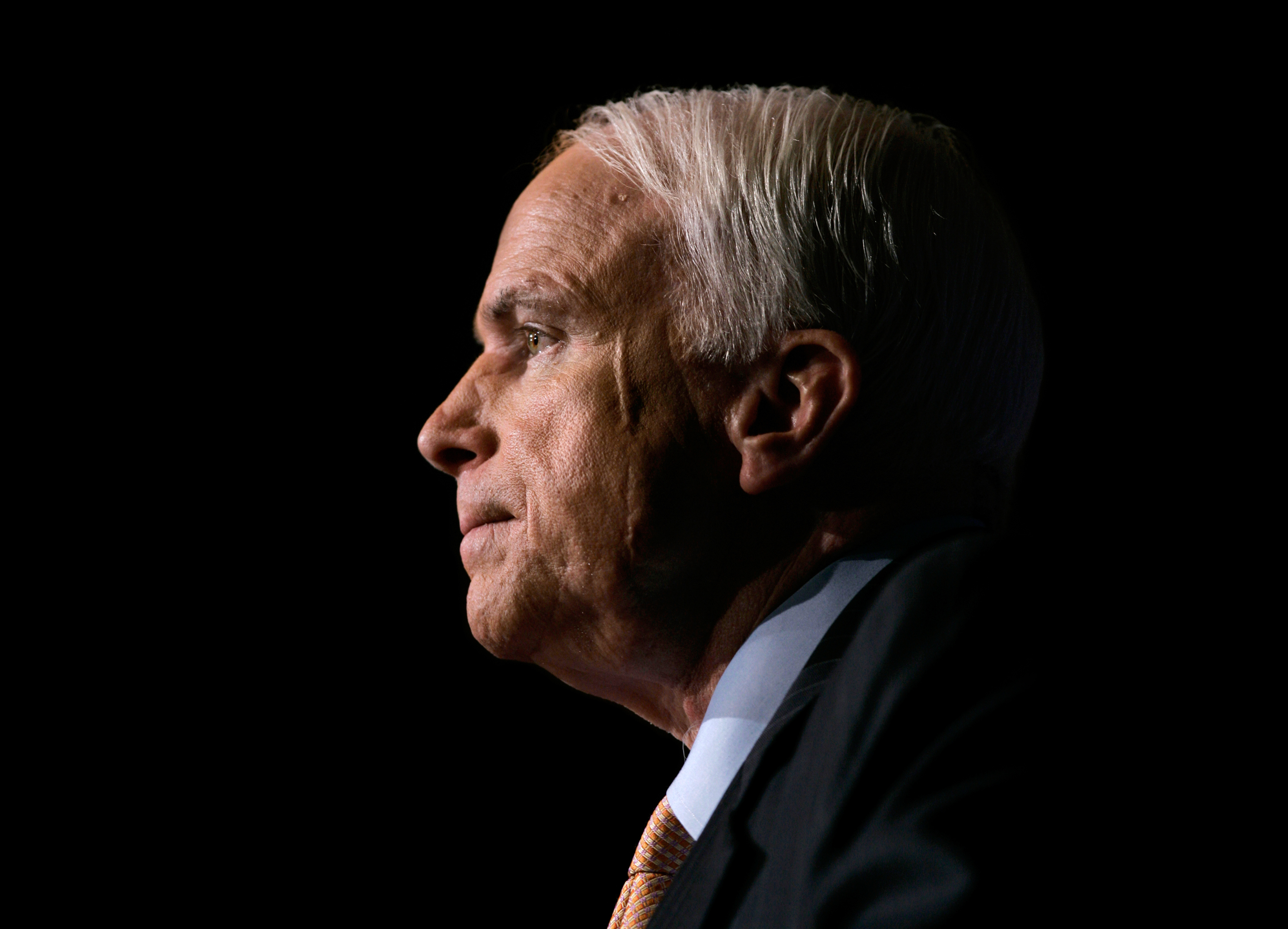 Sen. John McCain’s death removes one of the few remaining Vietnam-era veterans from national elected office, a fact that the senator lamented in a CNN interview in spring 2017. He said he hoped the next generation of service members from the Iraq and Afghanistan wars could help rekindle civil debate on Capitol Hill. (J. Scott Applewhite/AP)
13 of 15 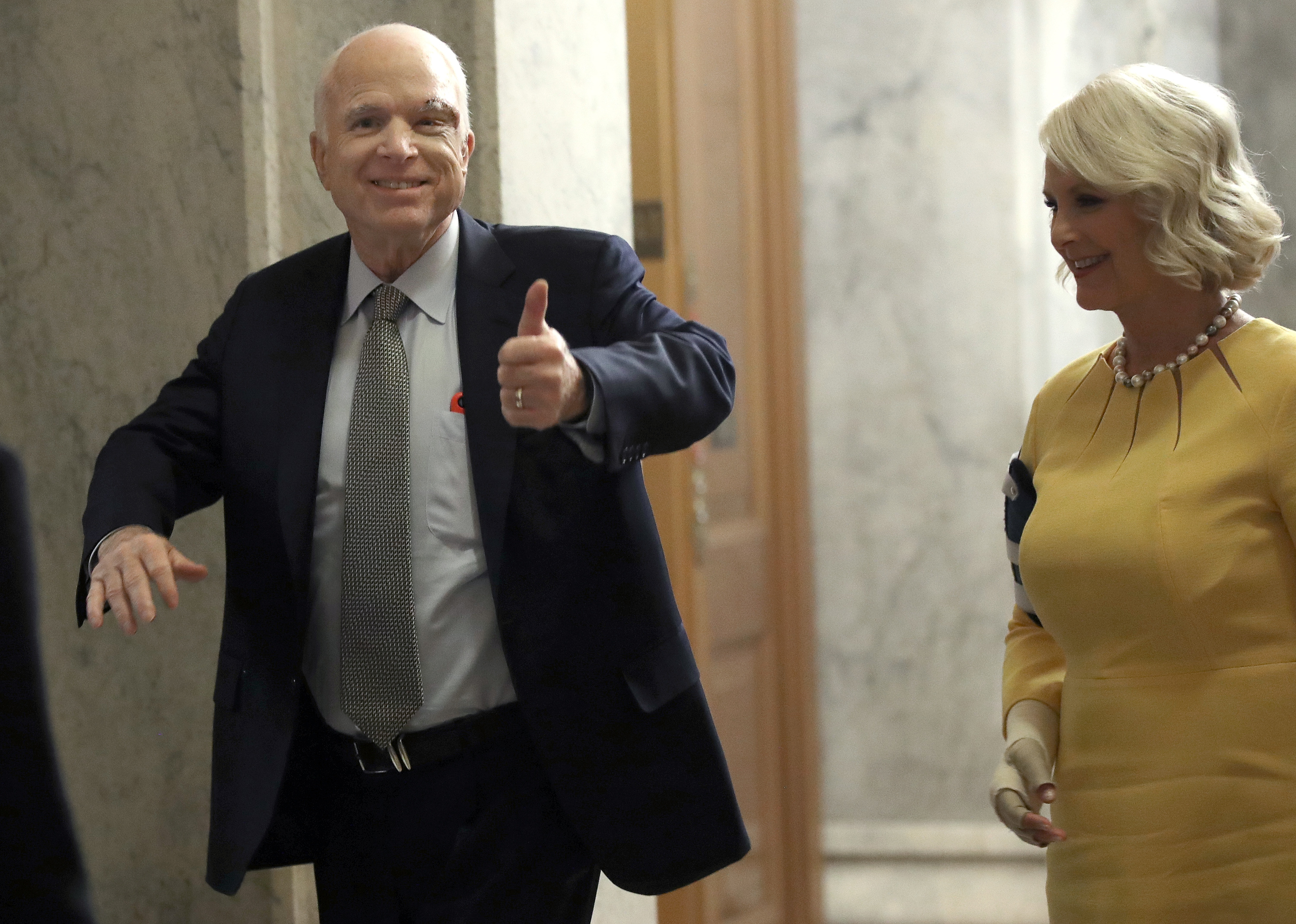 Sen. John McCain returns to the Senate accompanied by his wife Cindy on July 25, 2017, in Washington, D.C. McCain had been diagnosed with brain cancer but returned on the day the Senate held a key procedural vote on U.S. President Donald Trump's effort to repeal and replace the Affordable Care Act. (Win McNamee/Getty Images)
14 of 15 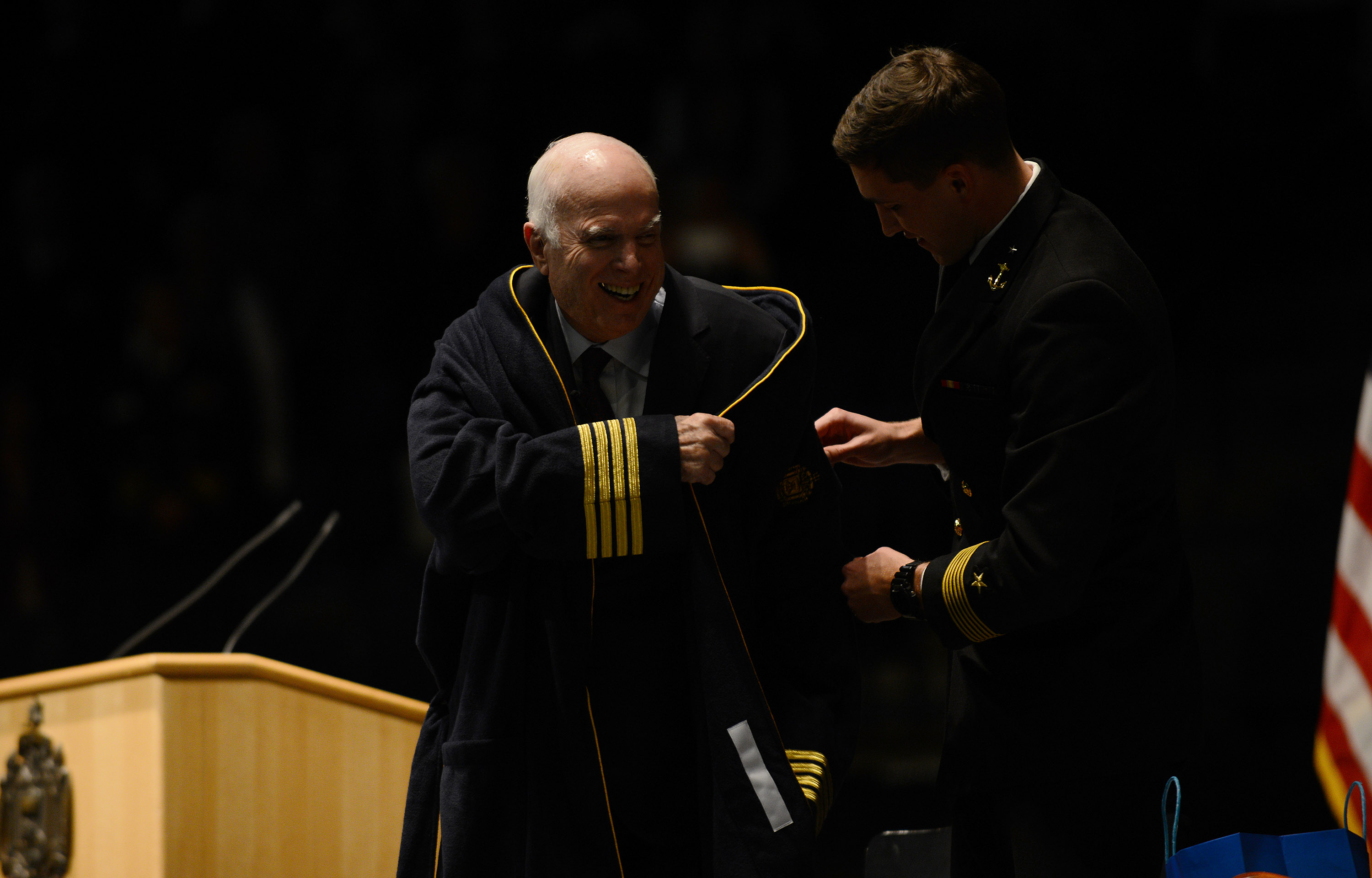 Sen. John McCain, R-Ariz., chairman of the Senate Armed Services Committee, laughs while trying to put on his gift, a Navy bathrobe, after addressing the Naval Academy on Oct. 30, 2017, in Annapolis, Md. He spoke about the importance of American leadership and service to one's country. (Astrid Riecken/Getty Images)
15 of 15 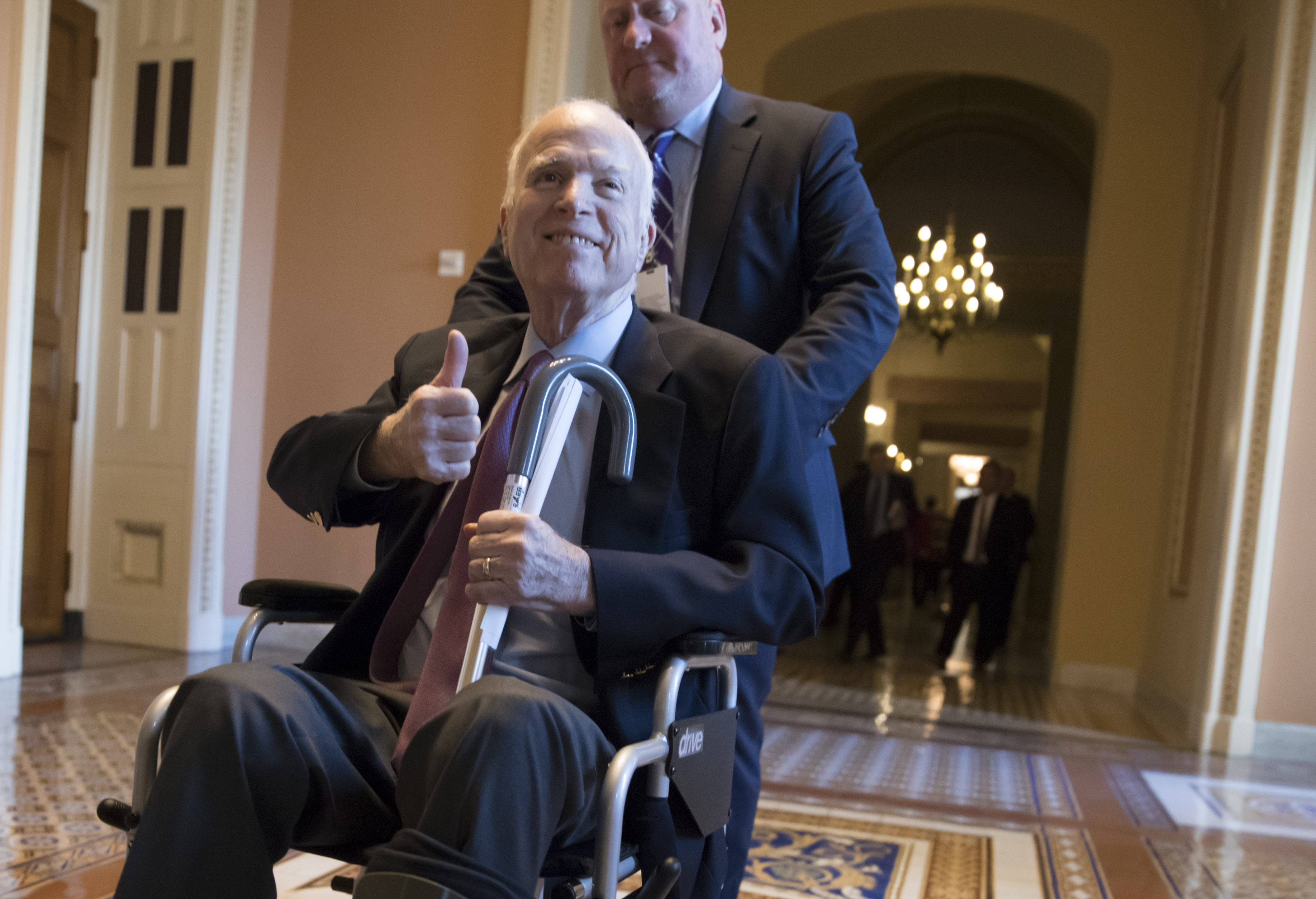 On Dec. 1, 2017, Sen. John McCain, R-Ariz., left a closed-door session where Republican senators met on the GOP effort to overhaul the tax code. President Donald Trump announced McCain was returning home to Arizona after being hospitalized over the side effects from his brain cancer treatment. (J. Scott Applewhite/AP)

McCain was diagnosed with brain cancer in summer 2017 but continued his work in the Senate through chemotherapy. The illness was the latest in a long line of health challenges for the senior Arizona senator, dating back to his imprisonment in Vietnam’s infamous “Hanoi Hilton” prison.

That occured in 1967, when then Lt. Cmdr. McCain’s Skyhawk aircraft was shot down during a bombing mission over Hanoi. He fractured both arms and a leg while ejecting from the plane, and he was refused proper medical treatment by North Vietnamese troops after his capture.

In 1968, after his father was named commander of U.S. Pacific forces, the North Vietnamese offered to release his son as part of a propaganda campaign. The younger McCain refused, saying he would only leave if his fellow POWs were also freed.

As a result, McCain spent five and a half years in captivity, facing frequent beatings and torture for his refusals to cooperate with his captors. The assaults left him unable to fully lift his arms for the rest of his life.

The former prisoner of war and longtime Arizona senator passed away Saturday at the age of 81.

Upon his return — and after years of physical therapy — McCain served as the Navy’s liaison to the U.S. Senate, a position that led to his own political career. He was elected to the U.S. House of Representatives in 1982 and to the Senate in 1986, the first of six terms in the chamber.

He ran two unsuccessful campaigns for the presidency, first losing in the Republican primaries to then-Texas Gov. George W. Bush in 2000 and later losing in the general election to then-Sen. Barack Obama, D-Ill., in 2008.

But the national exposure significantly raised McCain’s profile and helped establish him as a party leader on defense issues.

He frequently sparred with Obama over the president’s foreign policy strategies, particularly in regard to combat drawdowns in Iraq and Afghanistan. But he also was a vocal critic of Bush during his presidency on the issue of torture in regard to U.S.-captured enemies.

However, his relationship with U.S. President Donald Trump proved the most contentious. Trump repeatedly mocked McCain during the 2016 election campaign, at one point making fun of his capture in Vietnam. McCain in turn repeatedly dismissed Trump as an unstable, unserious statesman, and implied Trump dodged military service during the Vietnam War because of fake injuries.

That frosty relationship came despite both men’s stated desires to build up military readiness and funding. McCain had long been an advocate for bigger defense budgets and streamlined Pentagon operations, and he emphasized those priorities in both his committee legislation and public hearings in recent years.

Given his military background — along with his 23-year career, both his father and grandfather were four-star admirals — McCain was also heavily involved in veterans policy and reforming the Department of Veterans Affairs.

Arizona was the center of the 2014 VA wait-time scandal that forced the resignation of then-VA Secretary Eric Shinseki, and McCain played the role of negotiator between Republican and Democratic lawmakers on the legislative response.

Because of his illness, McCain has not traveled from Arizona to Capitol Hill since late 2017. But Senate Armed Services Committee staff have insisted that the chairman has maintained his leadership role on the panel, directing key policy decisions in the fiscal 2019 defense authorization bill signed into law earlier this month (and named in part for McCain).

US Navy dedicates Japan-based destroyer to US Sen. McCain

Not just one, not just two, but three generations of McCains are now honored on a U.S. Navy ship in the Pacific.

Before his absence from Washington, McCain had focused many of his public remarks on the dangers of partisanship in the face of challenges facing the nation. In the Naval Academy speech, he also railed against “parties that preach resentful nationalism rather than enlightened self-interest” and pressed for more compromise and compassion in governing.

“We have to fight against propaganda and crackpot conspiracy theories,” he said. “We have to fight isolationism, protectionism and nativism. We have to defeat those who would worsen our divisions. We have to remind our sons and daughters that we became the most powerful nation on Earth by tearing down walls, not building them.”

McCain’s death also removes one of the few remaining Vietnam-era veterans from national elected office, a fact that the senator lamented in a CNN interview in spring 2017. He said he hoped the next generation of service members from the Iraq and Afghanistan wars could help rekindle civil debate on Capitol Hill, balancing passionate views with mutual respect.

“I see talent coming up,” he said. “I have great faith in our system of government over time.”