Eighteen of the 32 women who reported to infantry one station unit training in February have earned their blue cords and will soon be joining the rest of the force as the Army's first junior enlisted female infantrymen.

A year after the Army lifted the ban on women serving in the armor and infantry branches, Fort Benning, Georgia, sent some of service's first female grunts off to the next step of their careers at a Friday graduation ceremony for 1st Battalion, 19th Infantry Regiment.

"Why be behind when you could be in front?" one female private told reporters on Thursday. The Army is withholding the names of the privates in order to protect their privacy.

The women were a minority of the 137 trainees who graduated from that first integrated cycle, and there were subtle differences about this cycle — pink and purple running shoes, long hair, more security in the barracks, and more visits from the brass.

"What is the difference? I know every female trainee that’s out here," said Col. Kelly Kendrick, commander of the 198th Infantry Brigade. "Their name, kind of their background. I know, if there’s a physical problem, what it is. At the brigade level. I don’t have that for males. Why? Because this is the first time we’re doing this. This is a pilot."

Over 12 weeks of training and 200 infantry skills mastered, the lessons learned came down to two: More portable toilets, one male private said, and more stretching and nutrition guidance for recruiters so they can better help recruits prepare for basic, according to Lt. Col. Samuel Edwards, commander of 1st Battalion, 19th Infantry.

"I like the challenge," said one female private, a college track-and-field athlete and self-described hometown girl. "I want to protect the people I love, and I want to do it in the most challenging way I can possible. Front lines or nothing." 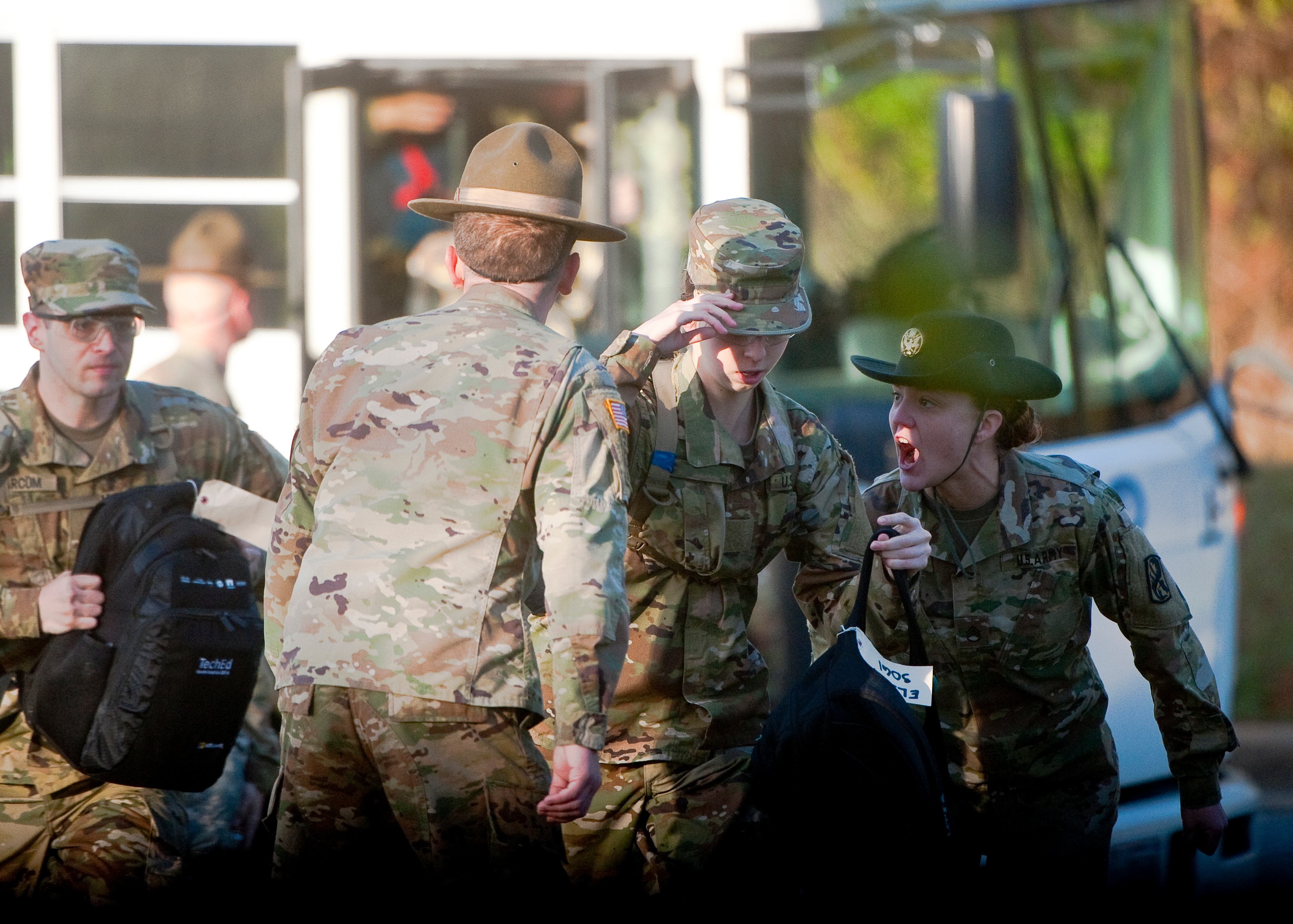 Soldiers-in-training assigned to A Company, 1st Battalion, 19th Infantry Regiment, start their first day of Infantry One Station Unit Training on Sand Hill, Fort Benning, Ga. The class that started Feb. 10 was the first to include female recruits.
Photo Credit: Patrick A. Albright/Army
The women stepped into hundreds of years of all-male tradition, but the way they and their leaders tell the story, everyone got on board. The many reasons people within and outside the Army gave to keep women out of combat — smaller bodies, more injuries, unique medical needs — faded away, they said.

"I didn’t have any preconceived notions myself, as if X amount of females aren’t going to make it because they are a certain size," said Command Sgt. Maj. Tyrus Taylor, the senior enlisted soldier for 1st Battalion, 19th Infantry Regiment.

The same went for the male privates, including a resident PT stud.

"There was even one female that did better than 90 percent of the males on the PT test," said the 22-year-old male trainee. "Speaking as the person who had the second-highest PT score — she had me looking over my soldier the whole cycle. It was something that definitely made me better, and maybe kept me up nights a few times. But certainly by the end of the cycle, I was doing more push-ups, because I had her chasing me."

Others were incredulous to be asked whether they had a problem serving alongside women or taking orders from them.

"It’s odd and funny and somewhat baffling to me that we’re sitting here having this conversation," said one 35-year-old male private. "Can women really keep up with men? Have you not been looking around for the last however many decades?"

About half of the women dropped out of training, at a similar rate to other recently integrated combat jobs, such as combat engineer, Edwards said.

"A lot of the females, when they started, in the beginning — I would think one way, I’ll be honest with you," said Sgt. 1st Class Karen Carter, a senior drill sergeant. "But they were incredible. Regardless of how much they weighed or size."

Infantry soldiers-in-training conduct close quarters battle training at Fort Benning, Ga. The Infantry One Station Unit Training class graduating on May 19 was the first to include female recruits.

Soldiers unanimously supported the integration down to the team level, unlike the Marine Corps' all-female model. In this OSUT cycle, some had two women on a four-man team. To start off, each platoon had eight women.

"It did work. I can’t speak on the Marines, but can tell you about the Army," Carter said. "And having the gender integration, it helps out because once they leave here and they graduate, who knows? They might be just that one female."

And as everyone is quick to reiterate, the standards stayed the same. In some ways, they may have, in fact, increased, because these recruits were also the first cycle to have to pass the Army's new Occupational Physical Assessment Test — with infantry-specific standards — before heading to basic.

"I just want to you be trained," said Sgt. 1st Class Joseph Sapp, a senior drill sergeant, about the new soldiers. "You’re going to take my place. Someday, you’re going to be a drill sergeant, so how can I sit here and not train you properly and get you ready to take over my place, put on this uniform and walk in my footsteps? It would be a disservice to my nation and to my Army to do that for that private."

If leaders could attribute the attrition rate to anything, it would be a private's size and athleticism up against the standard 35-pound ruck load, plus everything else needed for a combat operation.

"There are certain male soldiers that we’ve identified over the last three or four years, that based on their body mass index, their physical capabilities, they’re at a higher risk of injury," Kendrick added. "What I would clarify is, you’re more at risk, generally, for that. But if there’s a 5’2 athlete, soccer player, cross-country runner, they don’t have any risk at all."

The women from 1st Battalion, 19th Infantry are off to their next assignments, either with the 1st Cavalry Division at Fort Hood, Texas, or on to airborne school before reporting to the 82nd Airborne Division at Fort Bragg, North Carolina.

Right behind them are several dozen more women in the middle of OSUT in 2nd Battalion, 58th Infantry Regiment, followed by hundreds more on the schedule to report later this year.

Their hurdles, both physical and mental, are long from over, but senior leaders are confident that they will continue turning out the best qualified infantrymen, and the branch will treat them with respect.

"People have their things, but at the end of the day, I’m very proud of the fact that people are keeping their individual biases — which they’re entitled to, but not allowed to express in the Army," Sergeant Major of the Army Dan Dailey told Army Times on May 9. "You can believe whatever you want to believe, that’s one of the great parts of being in the Army. But you’re not going to subject somebody else to it."

The encounter marks the longest dogfight in U.S. military history.

The drills featured a live fire exercise with more than 140 aircraft and 12 naval assets.