Michael Tarm
August 17, 2016
BEIRUT — In a move that could reverberate across the Middle East, Iran confirmed Wednesday that Russia is using its territory to launch airstrikes in Syria even as a second wave of Moscow's bombers flew out of the Islamic Republic to hit targets in the war-ravaged country.

The development, which the United States says could violate U.N. resolutions targeting Tehran, represents a historical rapprochement with Russia that could rile U.S.-allied Gulf neighbors, strengthen Syrian President Bashar Assad and impact the war against the Islamic State group

Russia first announced the strikes on Tuesday from near the Iranian city of Hamedan, 280 kilometers (175 miles) southwest of the Iranian capital, Tehran. On Wednesday, Russia's Defense Ministry said another wave of bombers had departed from Iran, striking targets in eastern Syria.

Alaeddin Boroujerdi, the head of the Iranian parliament's national security and foreign policy committee, then gave the first government acknowledgement of the Russian operation. He said the Russians were using Iran's Shahid Nojeh air base some 50 kilometers (30 miles) north of Hamedan, a secluded base where Russian warplanes were detected landing late last year.

Boroujerdi said the Russian Tu-22M3 fighter jets landed inside Iran only to refuel under the permission of the country's Supreme National Security Council, a move that allowed them to carry a larger bomb load of more than 20 metric tons.

"There is no stationing of Russian forces in the territory of the Islamic Republic of Iran," Boroujerdi added.

In Moscow, Russian Foreign Minister Sergey Lavrov rejected U.S. allegations that its use of Iranian military bases for airstrikes in Syria violates U.N. sanctions prohibiting the supply, sale and transfer of combat aircraft to Iran. 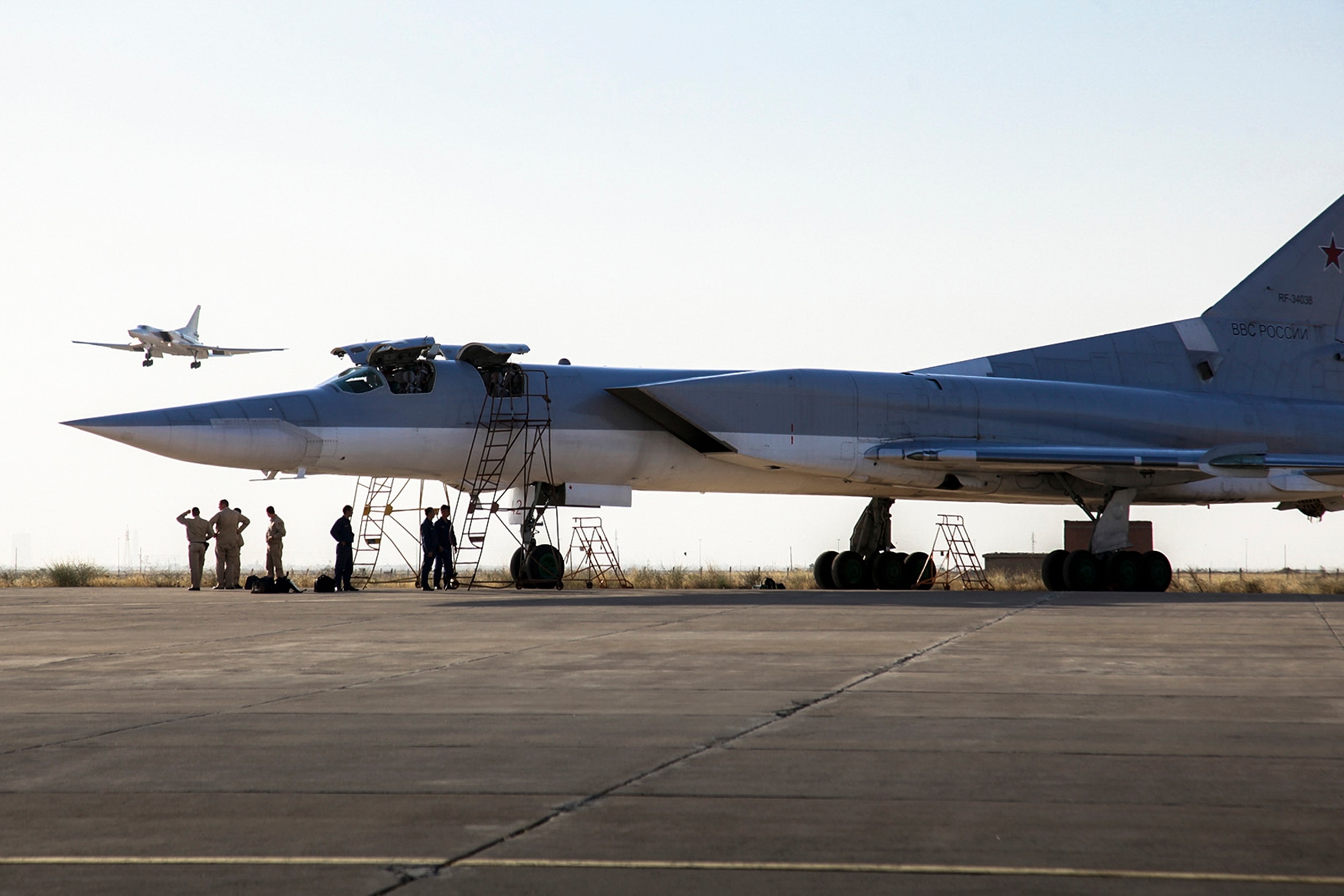 In this photo taken on Aug. 15, 2016, a Russian Tu-22M3 bomber stands on the tarmac while another plane lands at an air base near Hamedan, Iran. Russian warplanes took off on Tuesday Aug. 16, from Iran to target Islamic State fighters and other militants in Syria, widening Moscow's bombing campaign in Syria.
Photo Credit: WarfareWW Photo via AP
"In the case we're discussing there has been no supply, sale or transfer of fighter jets to Iran," Lavrov told a news conference. "The Russian air force uses these fighter jets with Iran's approval in order to take part in the counter-terrorism operation" in Syria.

Still, the move heralds even more intense Russian bombardment inside Syria, where Moscow has already been accused of indiscriminate attacks that have killed many civilians.

On Wednesday, presumed Russian or Syrian government airstrikes on the rebel-held city of Idlib in the northwest killed 17 people and wounded at least 30 others, the Civil Defense branch for the province reported. A video posted on the group's website showed rescue workers pulling bodies from wreckage along a heavily damaged street. The Syrian Observatory for Human Rights also reported the strikes, saying dozens of civilians were killed and wounded.

For Iran, allowing Russia to launch strikes from inside the country is likely to prove unpopular. Many still remember how Russia, alongside Britain, invaded and occupied Iran during World War II to secure oil fields and Allied supply lines.

But while Britain withdrew, Russia refused to leave, sparking the first international rebuke by the nascent U.N. Security Council in 1946. During the Soviet occupation of Afghanistan, Iran allowed refugees into the country and backed mujahedeen rebel fighters — as did the U.S.

That history will likely make any long-term Russian use of Iranian military bases unpalatable to the Iranian public, said Michael Rubin, a former Pentagon official who is now a scholar at the American Enterprise Institute. He suggested Russia must have made Iran "an offer it could not refuse" — perhaps involving military equipment like the Russian S-300 air defense missile systems that are being deployed in Iran.

"It surprised me greatly," Rubin said. "The basing of foreign troops in Iran has always been a red line."

Iran's constitution bars foreign militaries from having bases in the country, and Ali Larijani, the speaker of Iran's parliament, was quick Wednesday to say Russia does not have a permanent presence in the country, likely to try to assuage such domestic concerns.

"It doesn't mean that Nojeh is a Russian air base," he told The Associated Press. "Iran just let them land there and refuel their aircraft, and everything is under the control of Iranians there."

The move also will not go unnoticed by Iran's Sunni-ruled neighbors, which fall in the U.S. sphere of influence in the Middle East and host American military personnel. Relations have been strained since the beginning of the year, following Saudi Arabia's execution of a Shiite cleric and the subsequent storming by Iranian protesters of the kingdom's diplomatic posts in Iran.

"It is quite surprising for the (Gulf) states because here we have the Kremlin and the Iranian leadership agreeing on allowing Moscow to use Iran as a forward-operating base," Karasik said. "That has potential consequences down the road."

Russia's decision to launch raids from Iran puts it firmly in the camp of Shiite forces in the Mideast, Rubin said, something Moscow may not realize carries long-term consequences.

"The Middle East is a hornet's nest and it's not clear that Russia is going to be able to steer clear of some of the internal rivalries inside of the Middle East," he said. "Certainly, to get in this deep with Iran is going to reverberate."


Copyright 2016 The Associated Press. All rights reserved. This material may not be published, broadcast, rewritten or redistributed.