By Aaron Mehta and Andrew deGrandpre

Defense Secretary James Mattis on Monday filled two key positions on the Pentagon staff, choosing a two-star Navy admiral to be his senior military adviser and a retired Navy two-star to serve as chief of staff.

Mattis has known Faller and Sweeney for several years. Each worked for the retired Marine Corps general during his tenure as head of U.S. Central Command.

In these roles, both men will have considerable influence during internal policy discussions. Defense secretaries look to their advisers to provide candid, constructive advice on all manner of military operations and initiatives — and to speak up if they believe specific efforts are ill conceived. 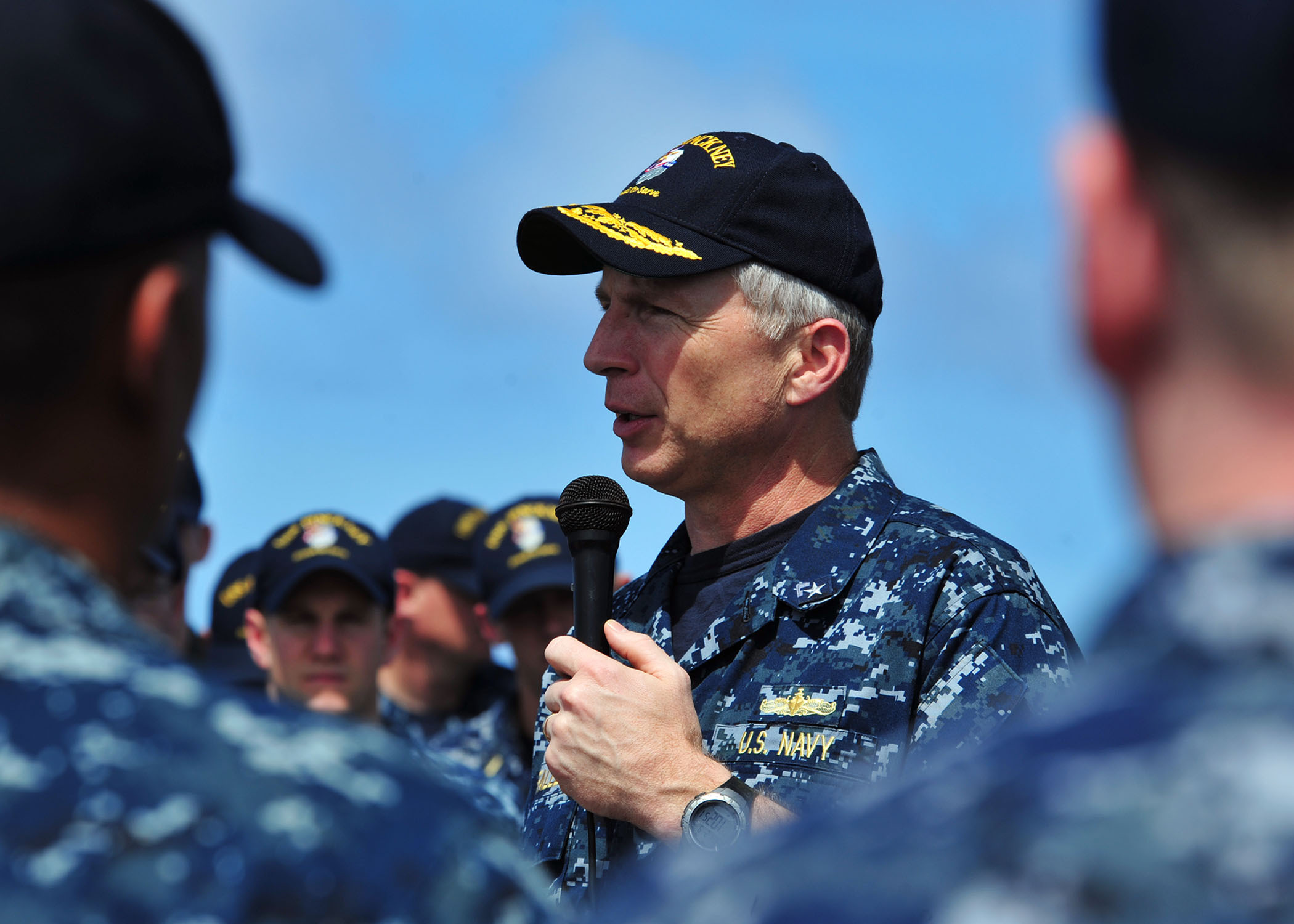 Rear Adm. Craig S. Faller, then-commander of Carrier Strike Group 3, talks to the crew of the destroyer Pinckney in U.S. 7th Fleet in February 2012.
Photo Credit: PO2 Eddie Harrison/Navy
Faller has served in the Navy for nearly 34 years, most recently as chief of legislative affairs. In that role he represented the service and its senior leaders on Capitol Hill. His familiarity with Congress likely signals that Mattis is intending to make a major push to grow the Defense Department's budget, which has been severely constricted by federal spending caps enacted five years ago.

The choice also indicates that Mattis intends to focus on external relationships — with lawmakers, U.S. allies and the American public — rather than internal oversight of the Pentagon. That task is likely to fall to Deputy Defense Secretary Bob Work, the highest-ranking Obama appointee asked to stay on as the Trump administration gets settled in Washington. A retired Marine Corps officer, Work is well regarded as a manager and seen as someone to whom Mattis can delegate day-to-day management of the department's sprawling bureaucracy.

Faller and Mattis have a noteworthy history together. While assigned to Central Command, Faller was investigated by the Navy Inspector General over allegations he breached military ethics rules when, as a carrier strike group commander in 2011, he was offered and accepted a luxury hotel suite in Malaysia.

The Navy determined Faller's missteps were mitigated because he accepted the room upgrade to accommodate several members of his staff. It was Mattis, as Faller's boss when the investigation was complete, who elected to forego disciplining the admiral.

Faller studied engineering at the Naval Academy and worked in nuclear specialties early in his career. Later, as a commanding officer, he deployed repeatedly the Middle East, leading combat forces supporting U.S. military operations in the Persian Gulf, and in Iraq and Afghanistan.

He's had a number of high-profile shore assignments, too, including as a fellow working for the late Sen. Ted Kennedy, as the head of Navy recruiting and as a top assistant to the head of U.S. Pacific Command. In that job, Faller would have gained valuable insight into U.S. efforts to contain North Korea and counter China.

While at Central Command, Faller served as operations director, a post that afforded him a oversight of the complex security dynamic throughout the Middle East. That will be important now with some 15,000 U.S. troops deployed to active war zones in Afghanistan, Iraq and Syria.

Rear Adm. Kevin M. Sweeney, speaks with sailors during a visit aboard the guided-missile destroyer Mason in November 2013.

Sweeney spent 32 years in the Navy, retiring in 2014. Since then, he's been active as part of an economic development group in Hampton Roads, Virginia.

He graduated from the Naval Academy in 1982, one year ahead of Faller, and worked for Mattis twice — first as an assistant at the now-defunct U.S. Joint Forces Command in Norfolk, Virginia, and later as the general's executive officer at Central Command in Tampa, Florida. Throughout his career, Sweeney held three high-profile staff assignments in Washington, working for top Navy leaders in the Pentagon and for members of the Joint Staff. The retired admiral also held several jobs focused on managing large office staffs, suggesting he will be valuable to Mattis and Work in helping to steer the Pentagon's day-to-day operations.

His background is quite diverse, however. Early in his career, Sweeney was focused on communications and combat systems. Later, as a commanding officer, Sweeney oversaw restoration of the USS Cole after it was attacked by suicide bombers in Yemen in 2000. Later, he deployed in support of the Iraq war.

Toward the end of his career, Sweeney came under professional scrutiny when a Navy investigation, led by a fellow admiral, determined that as the head of a carrier strike group he and another senior officer should bear responsibility for a costly training mishapin 2012. Sweeney's boss at the time, Adm. Bill Gortney, then the head of U.S. Fleet Forces Command, disagreed with and overruled that conclusion.

The issue overshadowed Mattis' confirmation process early on, with critics voicing apprehension about his nomination because of the short duration he's been separated from the military. The law requires that to serve as defense secretary, retired military personnel must be at least seven years removed from active duty. Mattis, who retired in 2013, required a waiver to bypass that policy.

Mattis was confirmed by the Senate on Friday and sworn into office that evening, arriving for work at the Pentagon on Saturday afternoon. He received his first daily intelligence briefing at that time, and convened a meeting with Work, Joint Chiefs Chairman Gen. Joseph Dunford and Vice Chairman Gen. Paul Selva.

In all three instances, Davis said, Mattis sought to reaffirm the United States' commitment to its allies — particularly in Europe, which is under renewed threat from neighboring Russia. Trump has suggested his administration may look to mend ties with Moscow, and he has questioned the need for NATO, causing angst at home and overseas.

"The secretary," Davis said of Mattis, "... wanted to place the call [to Stoltenberg] on his first full day in office to reinforce the importance he places on the alliance."

Aaron Mehta was deputy editor and senior Pentagon correspondent for Defense News, covering policy, strategy and acquisition at the highest levels of the Defense Department and its international partners.

The move builds on months of efforts to publicize health care and disability payouts available through the PACT Act.

US sending $275 million in military aid to Ukraine

Including the latest aid, the U.S. has now committed more than $19.3 billion in weapons and other equipment to Ukraine since Russia attacked on Feb. 24.

Army Sgt. Alfred Sidney was reported missing in action in May 1951 after his unit was attacked in South Korea, the Defense POW/MIA Accounting Agency said.

Dramatic changes in military pay to be focus of new study

About 2,000 independent pharmacies coming back to Tricare