U.S. Marines are conducting around-the-clock artillery support for American Kurdish partners battling ISIS in its de facto capital of Raqqa. That support has become vital as Kurdish forces have hit fierce resistance as they inch closer to the city center, according to on the ground fighters.

A Kurdish fighter on the ground in Raqqa told Military Times that the intensity of Marine artillery support has dramatically increased in recent days as the fight for Raqqa progresses.

However, the Syrian Observatory for Human Rights claims that U.S. artillery and air support over the beleaguered city has caused dozens of civilian casualties in the last several days of fighting.

Officials at U.S. Central Command say that the coalition has "strict targeting processes," which include "selecting platforms and munitions … that are most appropriate for the specific target and mission," a spokesperson at CENTCOM told Military Times. 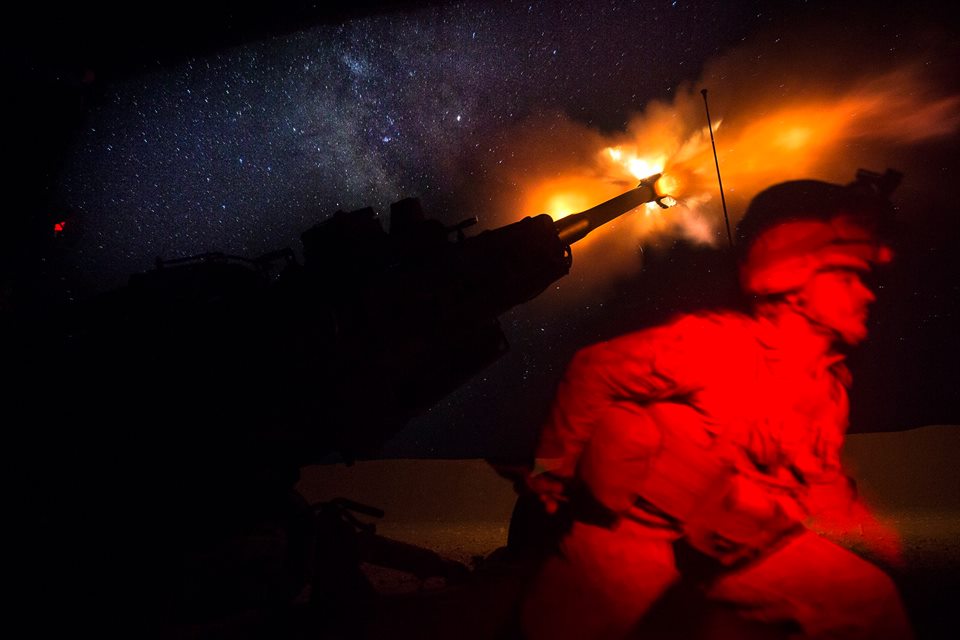 A Marine fires an M777-A2 Howitzer in the early morning in Syria, June 3.
Photo Credit: U.S. Marine Corps photo by Sgt. Matthew Callahan
One such platform is the M982 Excalibur precision guided munition, which is fired from the Marine Corps’ M777A2 Lightweight 155 mm Howitzer. The Excalibur round gives the Marine Corps precision fire to reduce collateral damage at ranges of nearly 20 miles.

Artillery support that the Marine Corps provides gives the commander all-weather, 24-hour a day, on-call, precision fire to support the forces on the ground.

Several fighters with the People’s Protection Unit, or YPG — Kurdish fighters with the SDF — told Military Times that YPG commanders on the ground call in artillery and air strikes by relaying coordinates to U.S. Special Operations Forces, who then relay the target to the Marine artillery unit.

The YPG commanders are equipped with Samsung tablets that have satellite imagery that can be used to coordinate strikes while also marking the location of friendly forces in the area. The tablet can also pull the feeds of overhead drones to assist in verifying targets for artillery strikes, per the source.

According to officials at the Pentagon, ISIS has had several years to stockpile arms, ammunition, and booby traps in Raqqa. Kurdish militants bogged down in the city are fighting through similar tactics and weapon systems used in Mosul, to include drone attacks by ISIS fighters.

"ISIS is using drones in Syria in a similar way to how they have in Mosul," said a spokesperson at CENTCOM. However, the spokesperson described the threat as merely tactical with little strategic impact on the battlefield.

In comparison, Kurdish fighters have been lightly equipped by the U.S., and officials in the Pentagon refuse to disclose if those weapons include anti-tank rockets.

Mackenzie Wolf is an editorial intern for Military Times.