Eighteen years after a jihadi attack on the Pentagon killed 184, President Trump told the crowd at a 9/11 remembrance ceremony for survivors, family members and first responders that the U.S. is striking back harder than ever before.

Hundreds of current and former Defense Department employees who were in the building on Sept. 11, 2001, along with families of the 125 killed, gathered at the Pentagon’s 9/11 memorial Wednesday morning to pay their respects. In his remarks, Trump alluded to the current situation in Afghanistan, where troops have been stationed since October 2001.

“We had peace talks scheduled a few days ago," he said of a planned clandestine meeting with senior Taliban officials. “I called them off when I learned that they had killed a great American soldier from Puerto Rico and 11 other innocent people.”

Sgt. 1st Class Elis A. Barreto Ortiz, 34, an 82nd Airborne Division soldier, was killed Thursday in an IED attack near the U.S. embassy in Kabul.

“They thought they would use this attack to show strength. But actually, what they showed is unrelenting weakness,” Trump said. "The last four days, we’ve hit our enemy harder than they have ever been hit before, and that will continue.”

“We’re certainly not going to sit still and let them carry out some self-described race to victory,” he said. “That’s not going to happen.”

Rocket blast at US Embassy in Kabul on 9/11 anniversary

A rocket exploded at the U.S. Embassy in Afghanistan just minutes into Wednesday, the anniversary of the 9/11 attack on the United States, but officials at the compound declared all-clear about an hour later and reported no injuries.

His remarks came a day after Secretary of State Mike Pompeo, in an appearance on ABC’s This Week, said that the U.S. had killed 1,000 members of the Taliban in the previous 10 days.

CENTCOM did not immediately return a request by Military Times for the number of missions carrier out against the Taliban over the past week. Officials from U.S. Air Forces Central Command could not immediately provide those figures.

While an agreement with the Taliban could be the key to ending the war in Afghanistan — which, along with the war in Iraq, has cost nearly 7,000 service members’ lives — it was five al-Qaida hijackers who crashed Flight 77 into the Pentagon. All 184 victims’ names were read off as part of the remembrance.

“Most of us recall exactly where we were when we first learned that our country was under attack," Defense Secretary Mark Esper said in his remarks at the Pentagon ceremony. "Some were at work, others were at home. A number of you were present in this very building when [American Airlines] Flight 77 crashed into those concrete walls.”

Officials have emphasized that any deal with the Taliban will depend on the group’s commitment to ensuring no terrorist organization is again able to use Afghanistan as a base to plan, train for and execute an attack on American soil.

“We’re here today to renew our commitment to never forget,” Chair of the Joint Chief of Staff Marine Gen. Joseph Dunford said in his remarks. “The terrorist attacks were intended to challenge our way of life and they sought to break out spirit. But their purpose was never realized. That day made us stronger, more determined, more resolved to protect our nation and that for which it stands.” 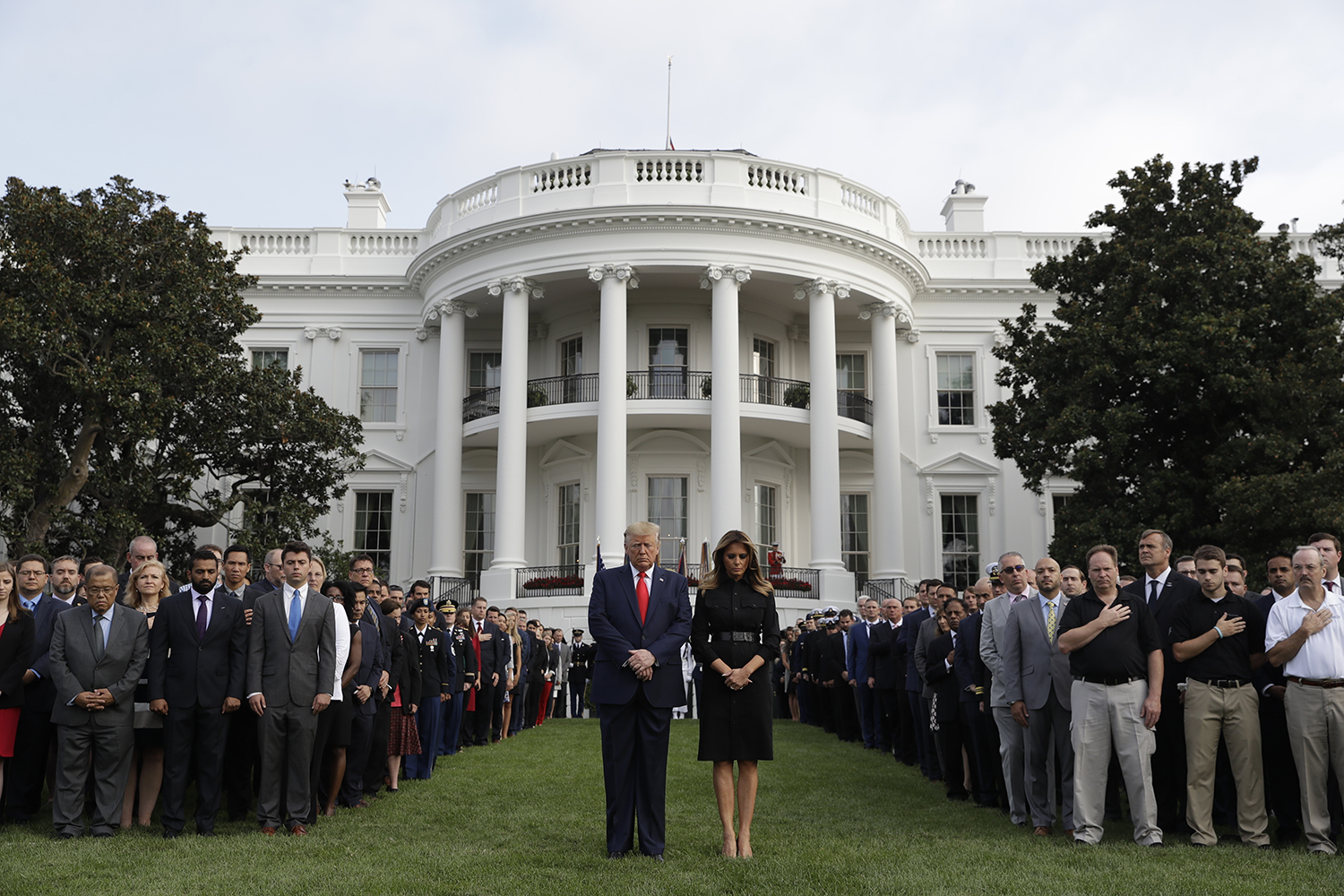 President Donald Trump and first lady Melania Trump participate in a moment of silence honoring the victims of the Sept. 11 terrorist attacks, on the South Lawn of the White House, Wednesday, Sept. 11, 2019, in Washington. (Evan Vucci/AP)
2 of 10 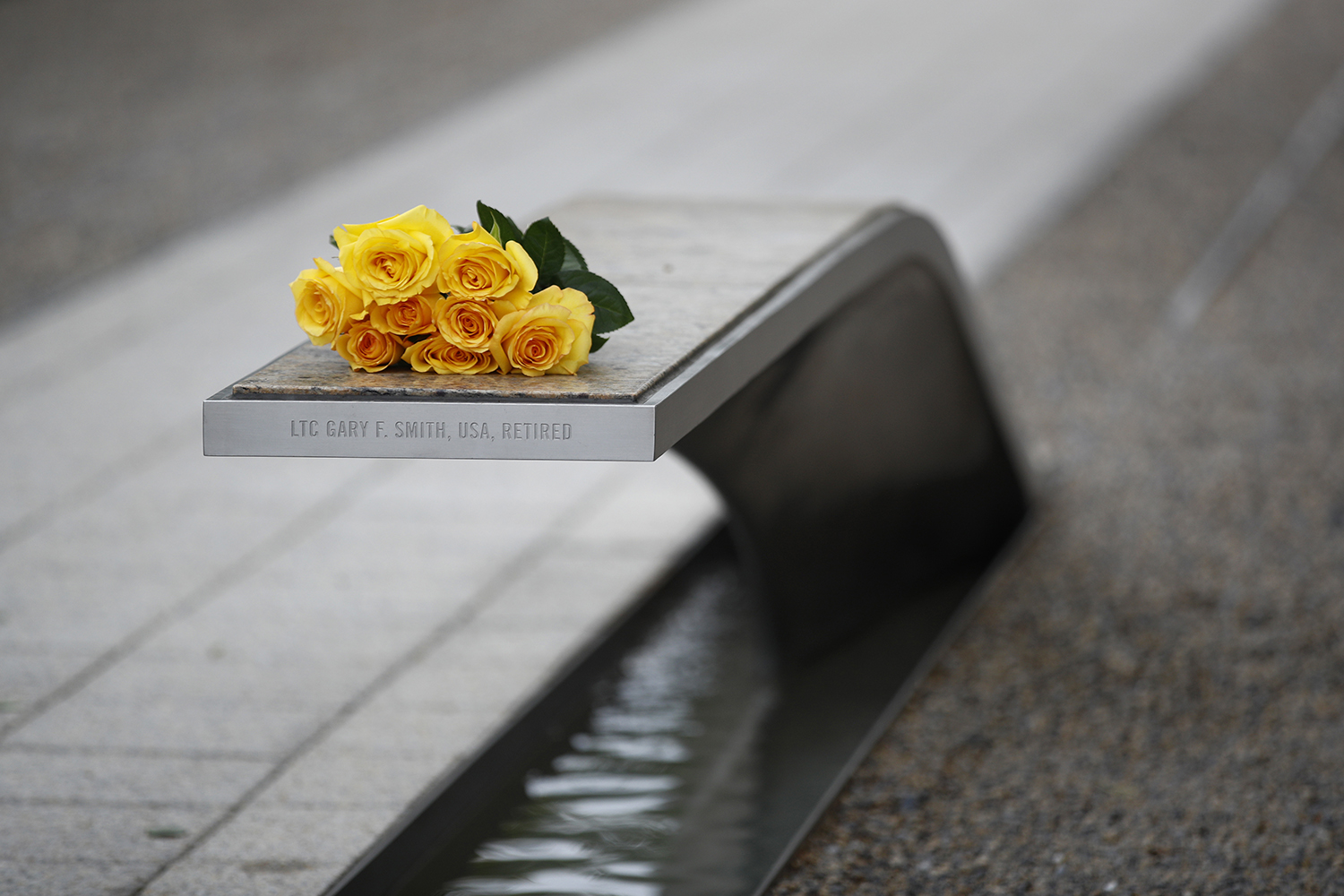 Flowers rest on a bench bearing a name in memory of retired U.S. Army Lt. Col. Gary Smith before a ceremony in observance of the 18th anniversary of the Sept. 11 attacks at the Pentagon in Washington, Wednesday, Sept. 11, 2019. (Patrick Semansky/AP)
3 of 10 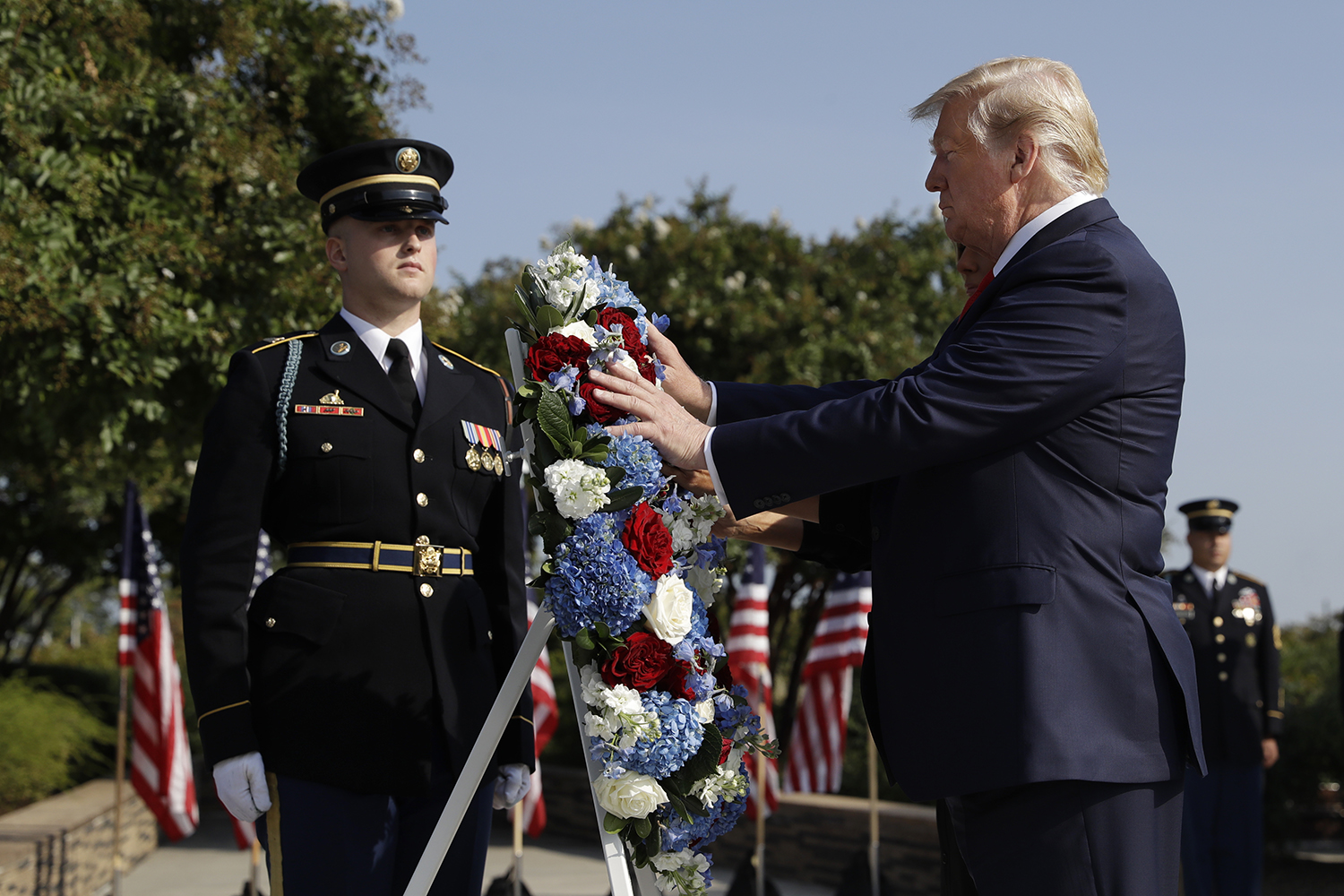 President Donald Trump and first lady Melania Trump place a wreath and will participate in a moment of silence honoring the victims of the Sept. 11 terrorist attacks, Wednesday, Sept. 11, 2019, at the Pentagon. (Evan Vucci/AP)
4 of 10 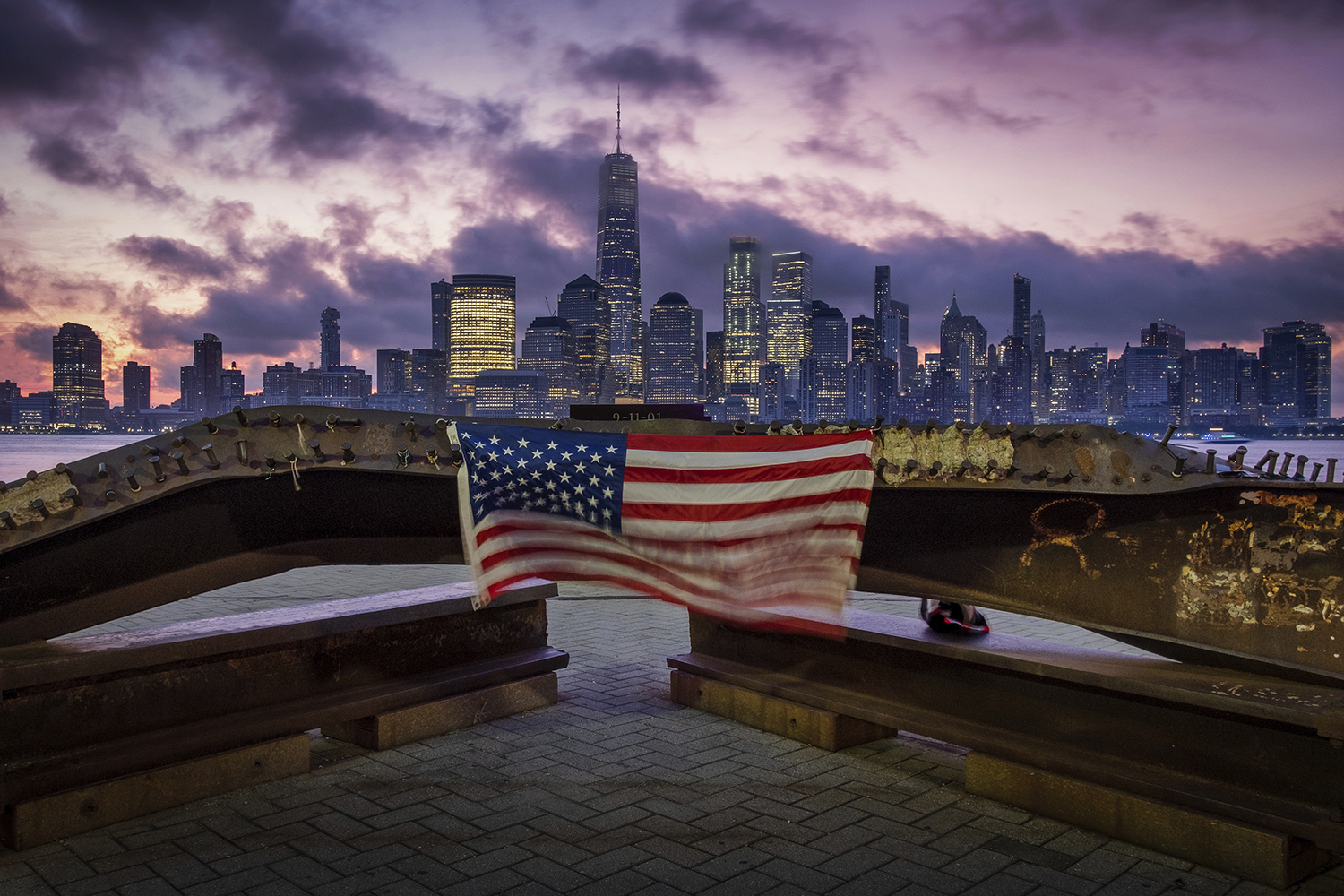 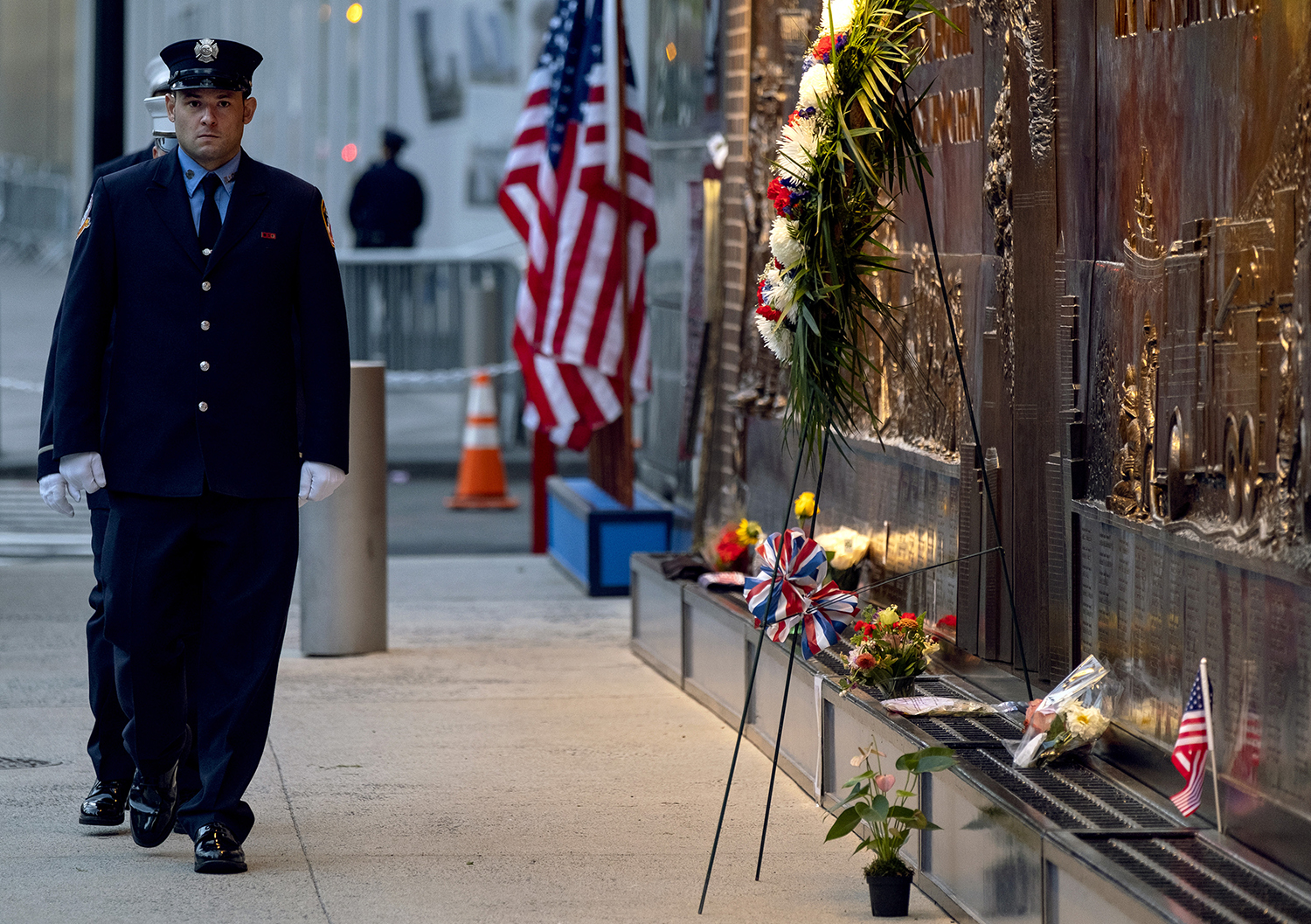 New York City firefighters take a position in front of a memorial on the side of a firehouse adjacent to One World Trade Center and the 9/11 Memorial site during ceremonies commemorating the 18th anniversary of the 9/11 terrorist attacks in New York on Wednesday, Sept. 11, 2019. (Craig Ruttle/AP)
6 of 10 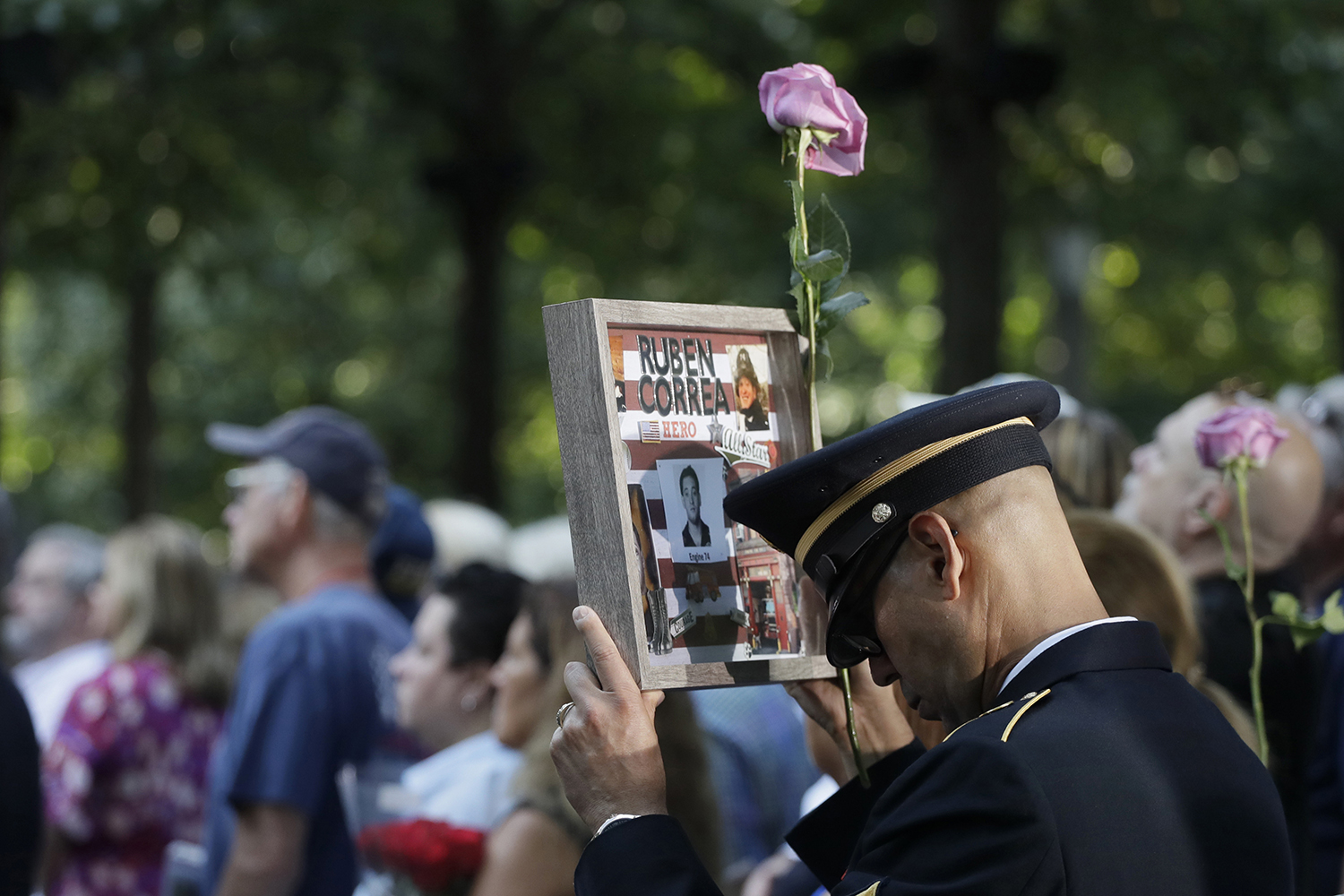 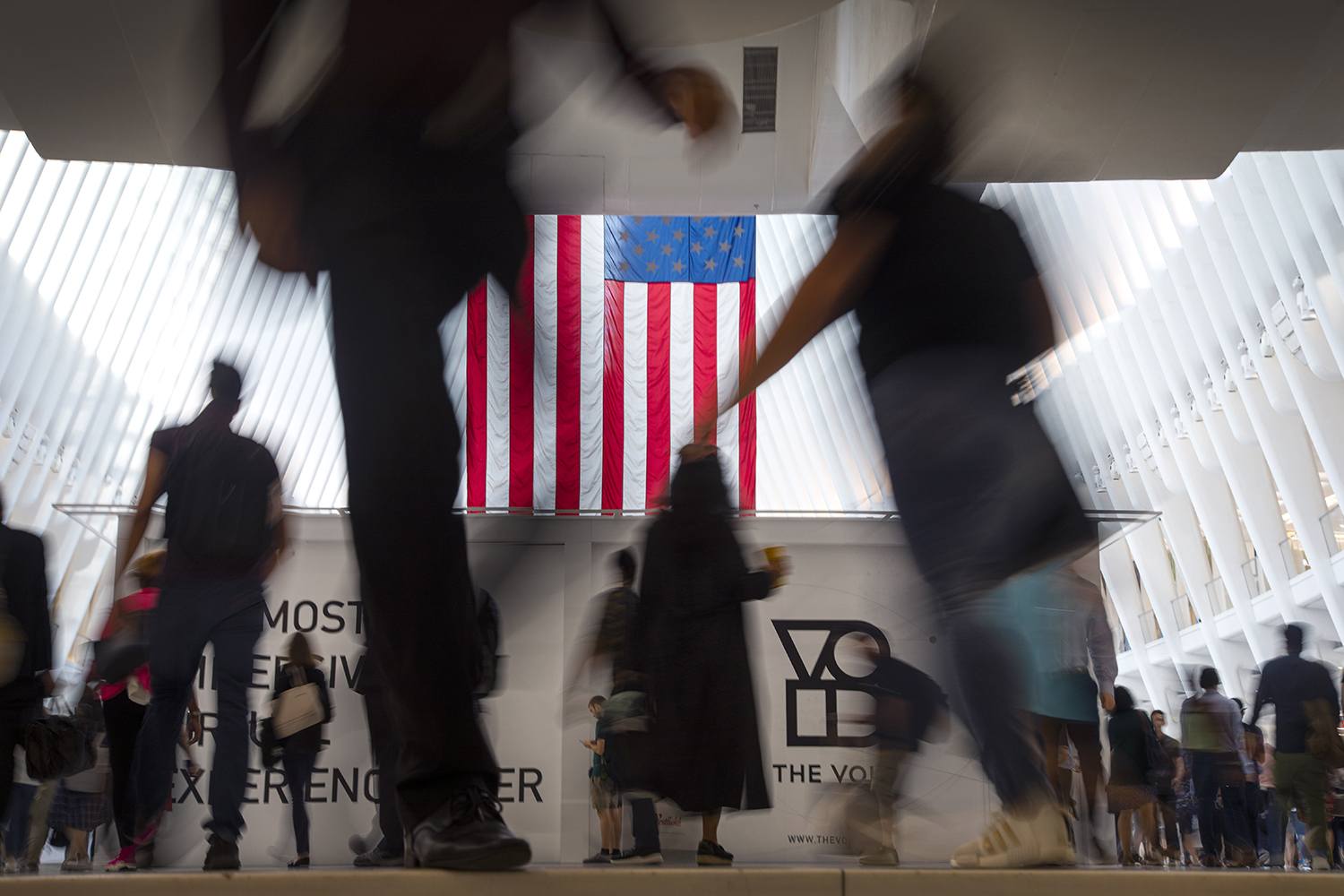 People walk past an American flag at the start of a work day, at the Oculus, part of the World Trade Center transportation hub in New York, Wednesday, Sept. 11, 2019, on the 18th anniversary of 9/11 terrorist attacks. (Wong Maye-E/AP)
8 of 10 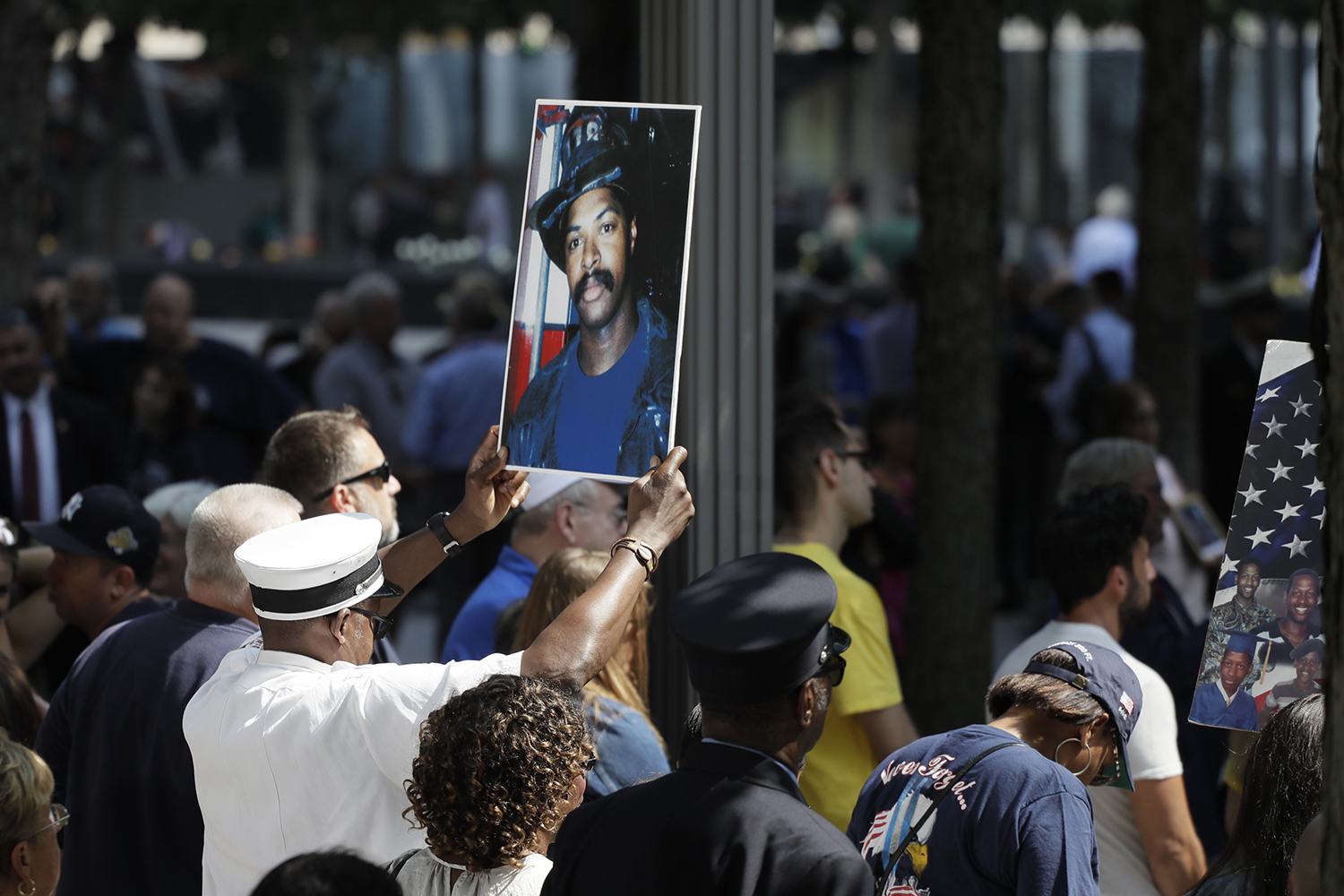 A photograph of fallen firefighter Leon Smith, Jr. is held up during a ceremony marking the 18th anniversary of the attacks of Sept. 11, 2001 at the National September 11 Memorial, Wednesday, Sept. 11, 2019 in New York. (Mark Lennihan/AP)
9 of 10 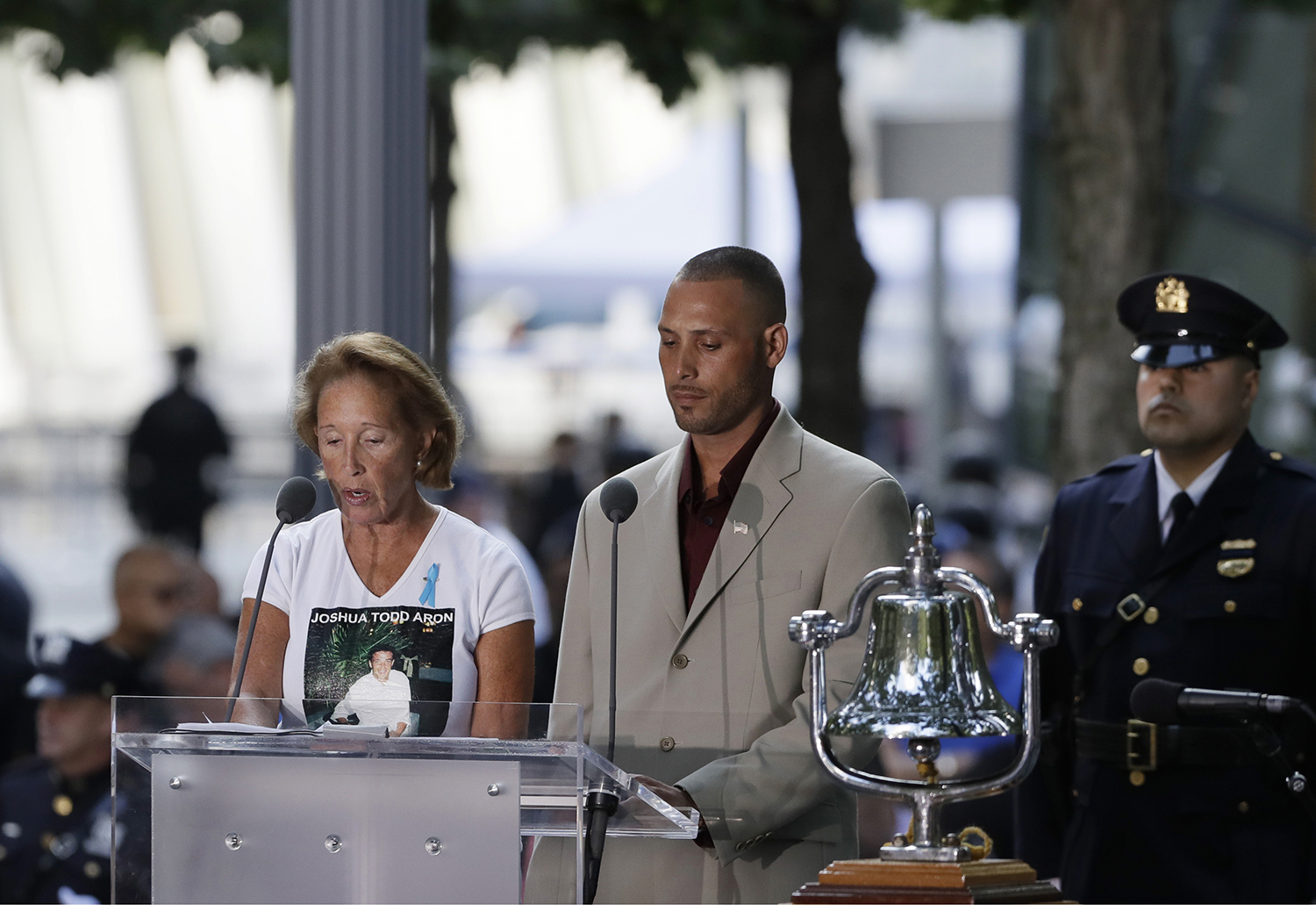 The names are read of victims of the Sept. 11 attacks during a ceremony marking the 18th anniversary at the National September 11 Memorial, Wednesday, Sept. 11, 2019 in New York. (Mark Lennihan/AP)
10 of 10 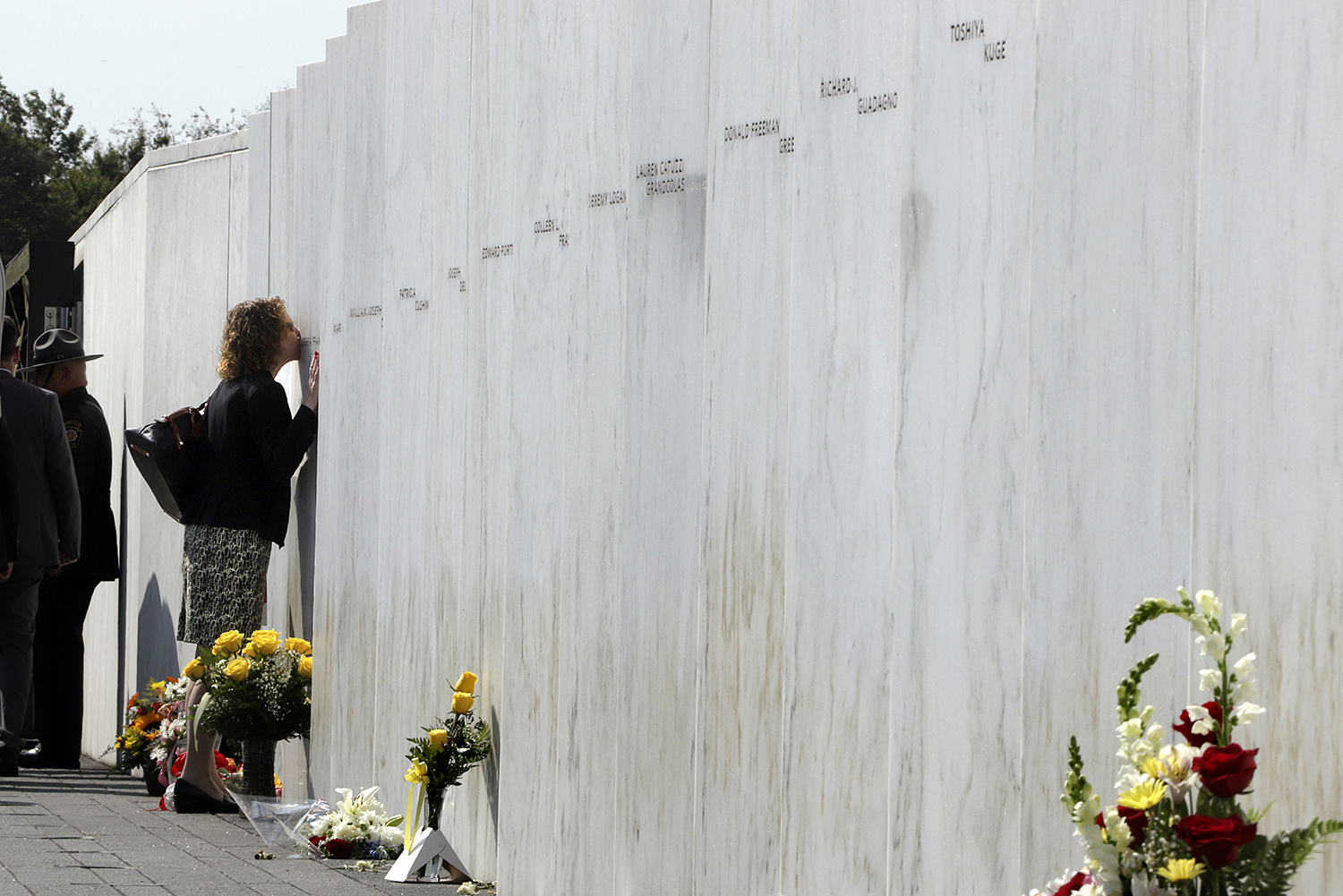 A woman pays respects at the Wall of Names at the Flight 93 National Memorial in Shanksville, Pa. after a Service of Remembrance Wednesday, Sept. 11, 2019, as the nation marks the 18th anniversary of the Sept. 11, 2001, attacks. The Wall of Names honor the 40 people killed in the crash of Flight 93. (Gene J. Puskar/AP)

National Guard troops in Washington, D.C. in the wake of a deadly attack on the U.S. Capitol building on Jan. 6 talk about the experience of being mobilized to the city in the midst of potential unrest around the inauguration of President-Elect Joe Biden.
Close
Now Playing