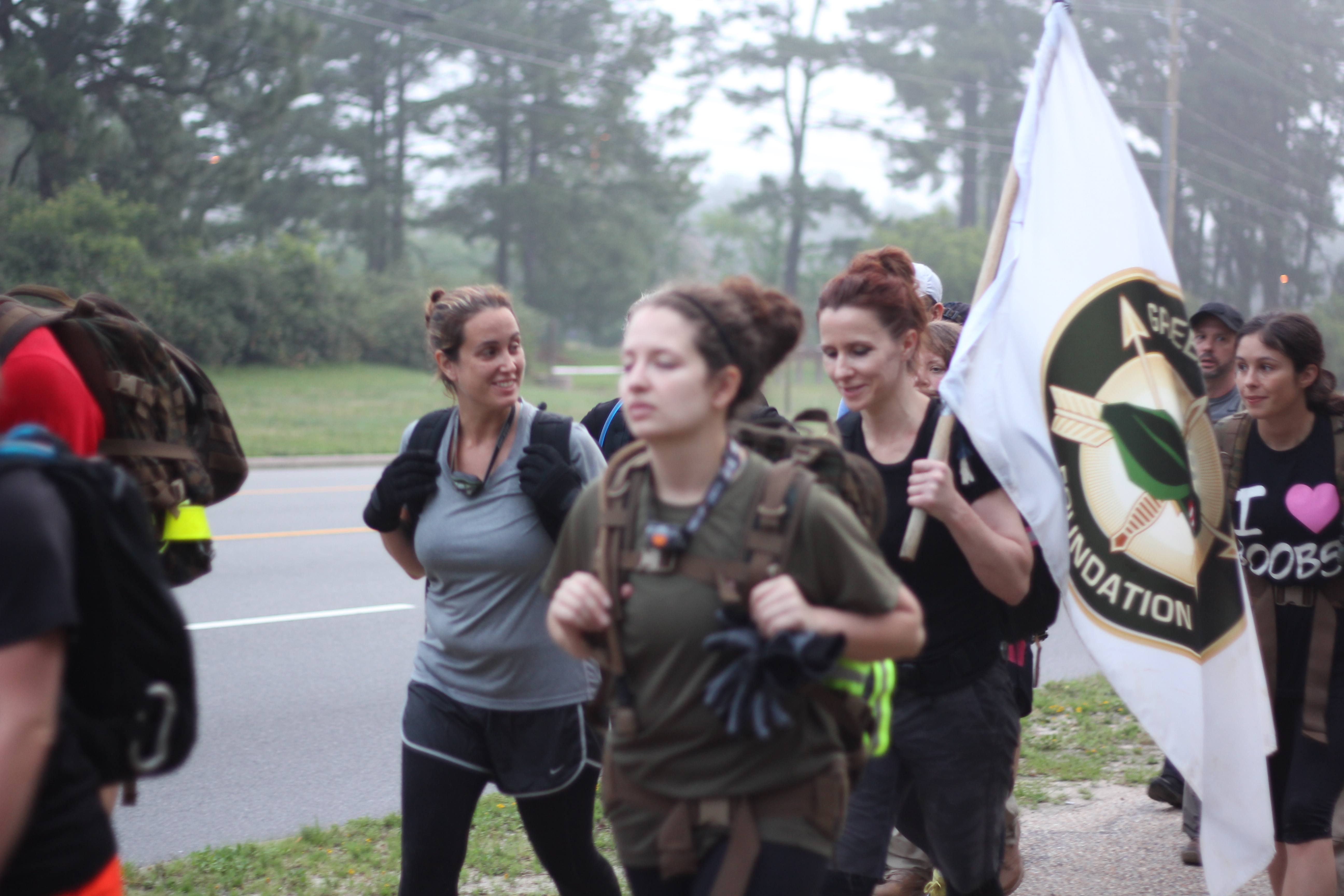 Louise Cantrell, left, looks at Jennifer Paquette, holding the Green Beret Foundation flag, during a "ruck" with civilians and families of the wounded and fallen.
Photo Credit: Courtesy of Jennifer Paquette

Louise Cantrell lost her entire family — her Green Beret husband, Edward Cantrell, and their two little girls — in a house fire in 2012.

The tragedy was "like the end of the world," she said.

But in the days since, the Green Beret community not only has supported her, but honored her husband's memory, in part through a sisterhood of wives of wounded and fallen Green Berets called the Steel Mags — short for Magnolias.

As a Steel Mag, Cantrell said, "we're all in difficult situations, but we persevere. ... There's something inside of us. We are independent, can handle crisis and take care of ourselves."

That inner strength led Cantrell to start a foundation to perpetuate the memory of daughters Isabella, 6, and Natalia, 4 — and to give back to the military and civilian communities.

Her girls loved to dance, so she started the Dancing Angels Foundation, providing scholarships for children's dance lessons, and other expenses related to dancing.

"It gives the joy of dance," she said. "It's happiness through dance. My little girls were kind and giving, and I know this is what they would have wanted."

And it has helped in her healing process as well: "Doing things for other people helps you heal."

Cantrell is an example of the mettle and purpose of the Steel Mags, said Jennifer Paquette, who founded the organization in 2010. The women help their communities, but they are also boosting their own confidence and sense of purpose.

"You're helping someone in the civilian community, but you're also helping yourself," Paquette said. "It works. You don't have to be a victim. That's what we want to communicate to the public, not just to the Steel Mags."

After her own experience when her Green Beret husband lost his legs in an IED attack in Afghanistan, Paquette knew that wives and sisters of wounded Green Berets need to support each other. What started as a small group of spouses of the wounded at Fort Bragg, North Carolina, has grown into a national organization and includes Army Special Forces Gold Star women, and wives of Army Special Forces who have seen numerous deployments but are not considered wounded.

"Being the wife of a Green Beret is not for the faint of heart in the first place," said Paquette. "You add injury or multiple deployments and unfortunately it's a recipe for disaster."

Many marriages are successful, but for others the strain is too much, she said. And problems can grow because like their Green Beret husbands, wives often are quiet professionals who stay in the background and are reluctant to seek help.

"When you've been with a guy for 10 years and all you've done is be by a bedside, and you don't take care of your body, your soul, your heart ... we have to stop that," said Paquette, who is also executive director of the Green Beret Foundation, which offers support to wounded and fallen Green Berets and their families.

In her work with these families, Paquette has sought to find a way to replicate the storied bonds of the Green Berets' brotherhood.

Thus, the Steel Mags were born.

"I need to find ways to help them be healthy," said Paquette. "These situations are dire. You can't live under that level of stress for years and years and years. We have to stay on top of these ladies, making sure they're taking care of themselves," not only for their own sakes, but so they can focus on helping their service member recover to the greatest extent possible.

The support needed varies. Sometimes it might be child care, or a respite caregiver for the wounded warrior so that the wife can run errands, work out, or have some alone time.

The wives stay in contact with each other to make sure all is well, and to help pick each other up when needed.

"At any time, I can call someone," Cantrell said. "That's a comfort." She also knows if she goes "off the radar" for too long, Paquette will be checking up on her.

Paquette isn't looking to have the Steel Mags duplicate what family readiness groups already do. Her mission is to find ways to help wives care for themselves and keep their independence, providing support, advocacy and guidance for their unique needs.

Then the Steel Mags take it to the next level — helping others and serving as examples of how to deal with adversity. For example, they participate in "rucks" with civilians, giving them a taste of Special Forces training ; and they participate in training at high schools giving insight into navigating through a man's world and being a leader.

"There are obstacles in life, but it's how you look at it. You can be sad about it. You give yourself time to mourn. But what do you do about it?" Paquette said.

She has pushed through this mission with determination, which is very much required to navigate the male-dominated Green Beret world.

At the same time, Cantrell said Paquette is very sensitive to her needs, knowing when she needs a push to leave her "dark place" when she's down and wants to stay cooped up in her house.

"She'll get you on the phone, or send a henchman," Cantrell said, jokingly. "She genuinely cares, and it's not because she feels sorry for us."

"It's like the Green Berets," Paquette said. "If one of us requests something that's legitimate, we'll lock arms and figure out how to get this girl through it. ... It's all about people doing the right thing.

"That's what the Steel Mags do. I'm not being quiet about these ladies any more."

Karen Jowers is the wife of a military retiree.

Karen has covered military families, quality of life and consumer issues for Military Times for more than 30 years, and is co-author of a chapter on media coverage of military families in the book "A Battle Plan for Supporting Military Families." She previously worked for newspapers in Guam, Norfolk, Jacksonville, Fla., and Athens, Ga.

Ukraine has won support from Baltic nations and Poland for its weekslong quest to obtain Western fighter jets.

US to increase weapons deployment to counter North Korea

Defense Secretary Lloyd Austin said the U.S. will increase its deployment of advanced weapons such as fighter jets and bombers to the Korean Peninsula.

The Justice Department dropped its probe of retired four-star Gen. John Allen for his role in an alleged illegal foreign lobbying campaign.

The Navy conducted a final test in August and is awaiting the test and evaluation report before declaring IOC on the entire mine countermeasures package.

Costs are rising throughout the Navy's shipbuilding budget: to train and recruit new workers, to bring in subcontractor support, and for materials.

All Marines can now take nearly 3 months of parental leave

Parris Island, South Carolina, one of the oldest posts in the Corps, was designated for Marine recruit training in 1915.