By Bram Janssen, The Associated Press and Sarah George

BADANA, Iraq — This farming village east of Mosul was turned into a bunker during more than two years of Islamic State group rule: A network of tunnels and cramped living quarters betrays an extremist group increasingly forced to operate underground by a punishing air campaign and mounting territorial losses.

Wrested from ISIS control on the first day of the offensive to retake Iraq's second-largest city, Badana offers a glimpse of the battle ahead. Above ground, walls were shredded by airstrikes and artillery, homes were stained black with soot and the buildings still standing had been looted.

Below ground, bags of fresh vegetables lay on the floor of a cooking area and a bowl of eggs sat beside a crude stove, suggesting the fighters managed to maintain supply lines up until days before their defeat.

"They spent their lives in these tunnels," said Tahseen Muhammed Sharif, a 35-year-old Kurdish fighter who said the Kurdish forces who drove the militants out of the village also found ammunition inside the tunnel network, which they seized. 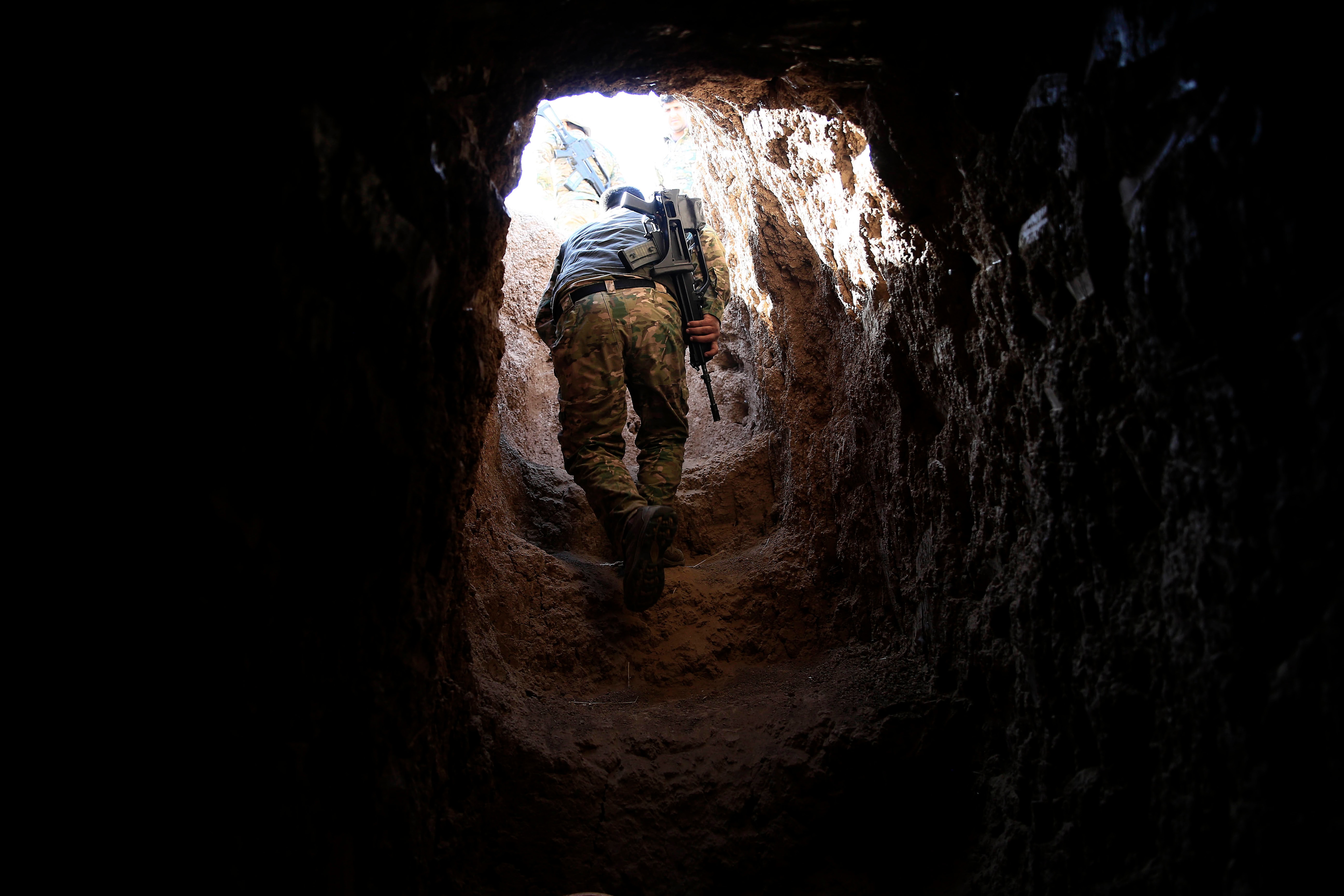 A peshmerga fighter walks through a tunnel made by Islamic State fighters, Tuesday, Oct. 18, 2016. The Kurdish forces found the tunnel in the town of Badana that was liberated from the Islamic State group on Monday. The fighters built tunnels under residential areas so they could move without being seen from above to avoid airstrikes.
Photo Credit: Bram Janssen/AP
"I can't imagine living like this," he added, sifting through kitchen refuse beside a pot of chickpeas still sitting on the stove. "There is a definite difference between us and them — their behavior, it's outside human behavior."

A small unit of Iraqi Kurdish fighters tasked with holding the territory in and around Badana, were camped Tuesday in a field behind a row of armored vehicles on the village's edge. While free of ISIS fighters, the area remains littered with dozens of booby-trapped explosives. Kurdish fighters moving along the narrow village roads stuck to paths they had already used and walked in single file.

When Iraqi forces reach Mosul, Patrick Martin of the Institute for the Study of War in Washington said they should expect to see similar complex defenses like the tunnel networks and booby-trapped explosives in Badana, but on a much greater scale.

"They're making sure that whenever the operation to retake the city commences it will be extremely difficult for the security forces to do so," Martin said, adding that while there are reports of some IS fighters fleeing Mosul, the group has also displayed a willingness to defend the city by mobilizing car bombs, suicide bombers and building trenches.

When IS fighters moved into the territory around Mosul more than two years ago, the group attacked with convoys that traversed the open desert and held parades in the city center. Now, faced with punishing airstrikes by the U.S.-led coalition, the fighters have been forced to change tactics, melting into civilian populations and building networks of tunnels under residential areas so they could move without being seen from above.

A peshmerga fighter walks through the kitchen of an underground tunnel made by Islamic State fighters, Tuesday, Oct. 18, 2016. The Kurdish forces found the tunnel in the town of Badana that was liberated from the Islamic State group on Monday.

After a string of victories over the past year, Iraqi ground forces have pushed ISIS out of more than half the territory the group once held in Iraq, with close support from the U.S.-led coalition. Now, with the launch of the campaign to retake Mosul, the extremists' main stronghold, Iraqi forces are again operating under coalition air cover.

During the first day of the operation, the most complex for Iraq's military since the withdrawal of U.S. troops in 2011, Kurdish forces say they retook nine villages and pushed the frontline back eight kilometers (five miles).

But like Badana, those villages were almost completely empty of civilians, allowing coalition warplanes to largely clear the territory from the air.

In the center of the village on Tuesday, a group of Kurdish fighters gathered around the bodies of two ISIS militants killed in an airstrike a day earlier, some crouching down to snap selfies.

A peshmerga fighter looks out of the entrance of an underground tunnel built by Islamic State fighters, Tuesday, Oct. 18, 2016. The Kurdish forces found the tunnel in the town of Badana that was liberated from the Islamic State group on Monday. The fighters built tunnels under residential areas so they could move without being seen from above to avoid airstrikes.

Lt. Col. Fariq Hama Faraj said he and his men celebrated their victory the day before and have since received orders that they will not advance any further in the Mosul fight.

"Our task is finished," he said, adding that he doesn't believe this will be the last time he fights the Islamic State group.

"They will come back with a new name and they'll be more extreme and more barbaric," he said, ducking a downed power line as he walked through the ruined village back to his camp.

"If you look to the history of these organizations we see that each one is more extreme than the last."

US to send Ukraine another $1 billion in military aid

The new aid includes additional rockets for the High Mobility Artillery Rocket Systems, or HIMARS, as well as other ammunition and equipment.

Taiwan said it continued to detect Chinese aircraft, ships and drones simulating attacks on the island.

Defense Secretary Lloyd Austin declined to provide Guard personnel and the use of the D.C. Armory to assist with the reception of migrants into the city.

China on Friday said it is canceling or suspending dialogue with the United States on a range of issues from climate change to military relations and anti-drug efforts.

Recipients look back at their service on National Purple Heart Day

Replacing cannon artillery with rockets risks the lives of Marines and success of close operations, these retired Marines say.

The appeal to the Supreme Court — which has garnered support from two former Trump admin. officials — follows years of efforts by the late Staff Sgt. Joshua Berry’s family.

“You are using the military to create fear in the minds of the people," Chairman of the Joint Chiefs of Staff Gen. Mark Milley wrote in a never-sent resignation letter.

Sharon Harmon attained the rank of colonel at a promotion ceremony Saturday at Camp Fogarty.

US to send Ukraine another $1 billion in military aid

Now that PACT Act has passed, how soon will veterans see their benefits?