BEIRUT — Syrian government forces are besieging the last Islamic State stronghold in the northern province of Aleppo, weeks after launching an offensive to retake the entire province, state media and an opposition monitoring group reported Thursday.

The push on Deir Hafer comes as U.S. aircraft ferried Syrian Kurdish fighters and allies behind ISIS lines to spearhead a major ground assault on the strategic IS-held town of Tabqa in Raqqa province, which borders Aleppo.

That airlift marked a deepening U.S. involvement in Syria's conflict ahead of a looming battle for the extremist group's de facto capital, the city of Raqqa. 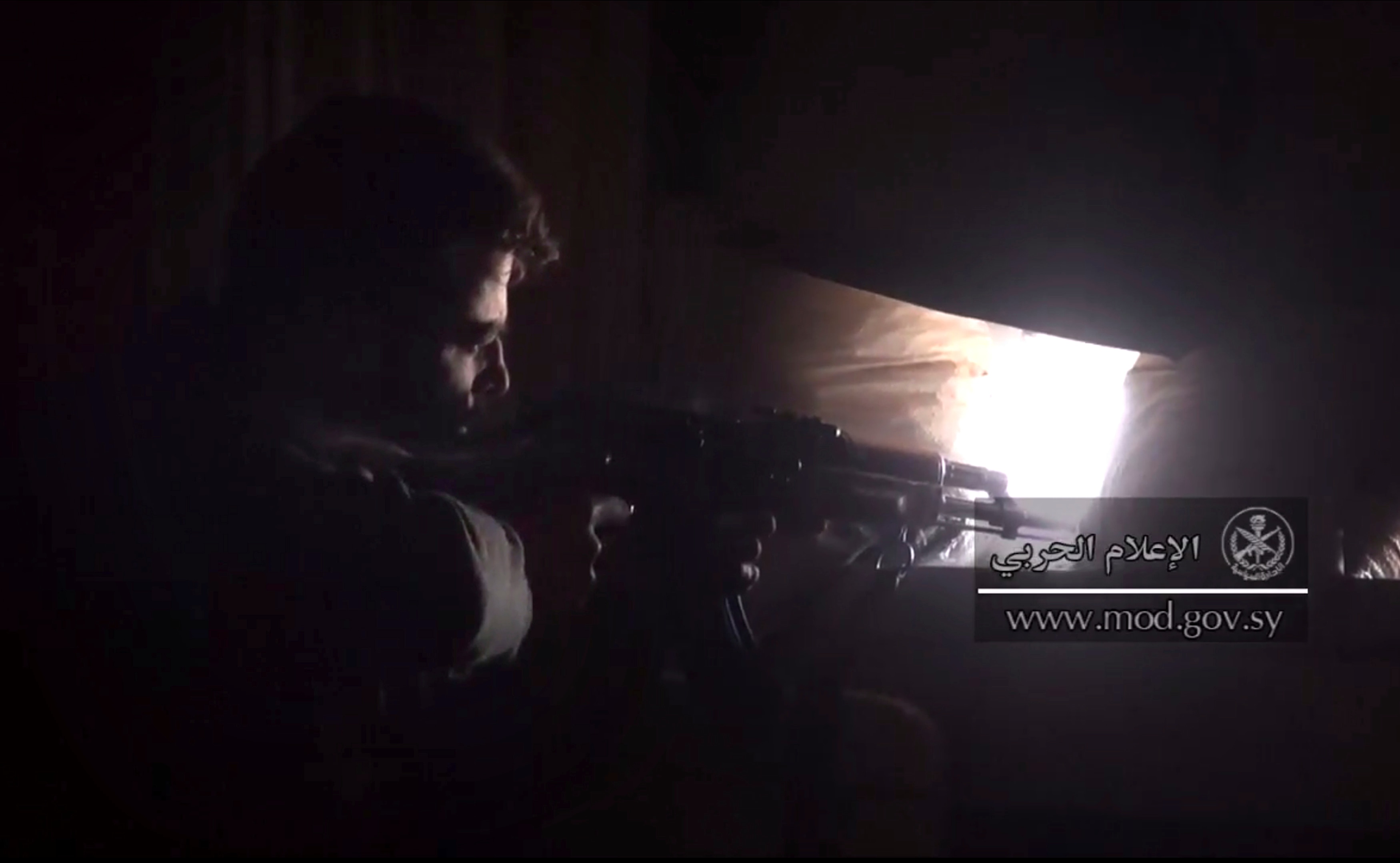 This frame grab from video provided by the government-controlled Syrian Central Military Media, shows a soldier from Syrian troops firing his weapon during fighting with insurgents, in an eastern neighborhood of Damascus, Syria, Wednesday, March. 22, 2017.
Photo Credit: Syrian Central Military Media, via AP
The airlift was part of what Pentagon spokesman Eric Pahon described as a large, high-priority offensive to secure the area around Tabqa and the associated Tabqa Dam.

The U.S.-backed Syrian Democratic Forces said in a statement Thursday that its fighters, along with military advisers form the U.S.-led coalition, landed Tuesday night in the near Tabqa with their equipment and vehicles, and have already secured a wide area.

"It has become a military base to launch our operations on the west bank of the river until eventually liberating all the countryside of Raqqa," the statement said.

Tabqa lies 45 kilometers (28 miles) west of Raqqa. The Islamic State group controls the town as well as the Tabqa Dam on the Euphrates River which supplies electric power to the area and a military airfield nearby.

The SDF statement said the aim of the operation is to capture the town, its dam and the power stations. It called on all civilians to stay away from ISIS positions and young men to join the anti-ISIS force. 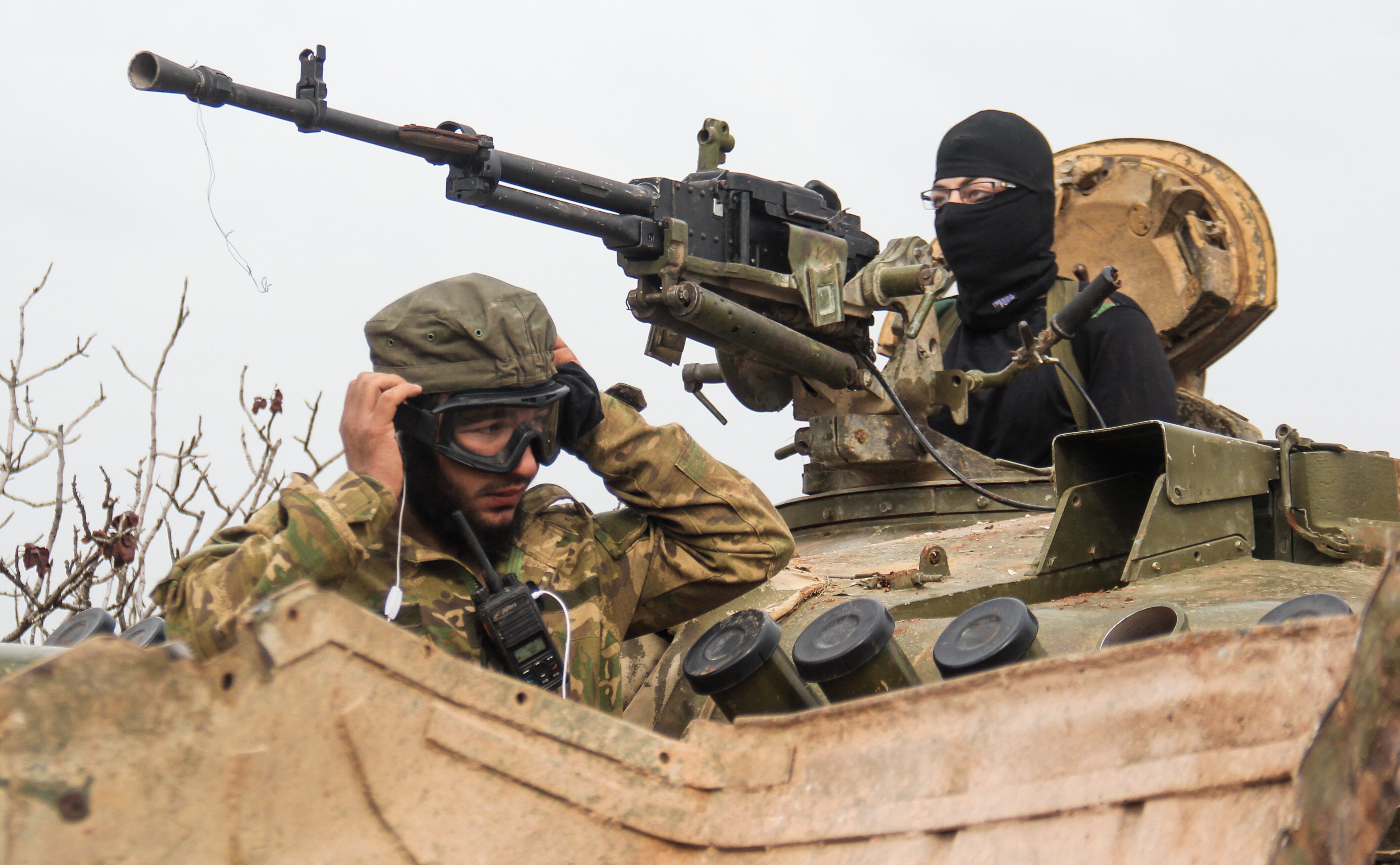 A picture taken on March 22, 2017 near the town of Maardes in the countryside of the central Syrian province of Hama, shows a rebel fighter putting on his headgear as another mans a machine gun turret in an armoured vehicle.
Photo Credit: Omar Haj Kadour/AFP via Getty Images
The Syrian Central Military Media says Syrian troops launched the Deir Hafer siege late Wednesday after capturing nearby areas.

The Observatory also reported intense clashes in the central province of Hama, where insurgent groups spearheaded by al-Qaida's branch in Syria launched a wide offensive capturing dozens of villages and towns over the past two days.

The charity group Save the Children said the Hama fighting has displaced 10,000 people.

In Geneva, the top deputy for the U.N. Syria envoy shuttled between hotels to meet with representatives from the government and opposition groups ahead of the formal start of a fifth round of U.N.-mediated peace talks.

The U.N. envoy for Syria, Staffan de Mistura, issued a statement Thursday noting that all parties have arrived for the talks in Geneva.

His deputy, Ramzy Ramzy, kicked off the day meeting with the government delegation. He is also expected to meet with opposition delegates for informal consultations.

De Mistura will formally start the talks Friday after returning from discussions with regional and international stakeholders in the Syrian conflict.

The Geneva talks are expected to tackle the issues of governance, a new constitution, elections and terrorism.