'Finish the wall': How you can help honor Vietnam War's fallen

In 1982, a black granite memorial with more than 58,000 of them stretched over 70 panels took its place among the landmarks of Washington, D.C., reminding all who visit that, as the inscription puts it, "Our nation honors the courage, sacrifice and devotion to duty and country of its Vietnam veterans."

The message, and the design borne from criteria that specifically forbade political statements, was simple: These are the service members, the sons and daughters, the old and (mostly) young, who have given everything for the nation’s greater good.

But every name, the saying goes, has a story. And while visitors to the wall may take away etchings or leave mementos, those stories won’t fit on blocks of stone.

In 2009, more than a quarter-century after the dedication of the Vietnam Veterans Memorial and more than 35 years after the U.S. signed the Paris Peace Accords, the group behind the private donations that funded "The Wall" began a new project – one that would preserve the memories of the fallen in the digital realm, with room to tell their tales through images and the memories of those they left behind. 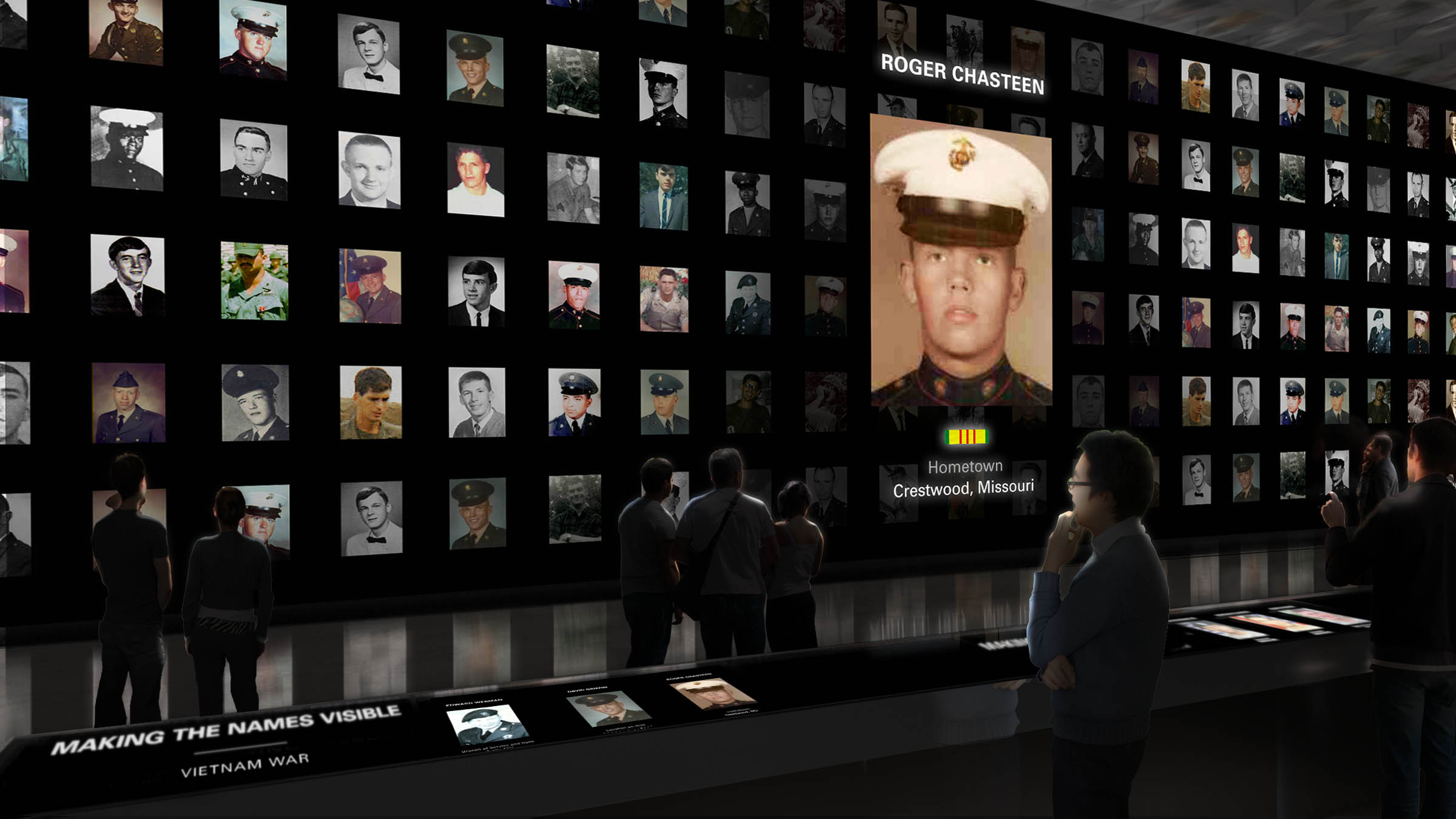 An artist’s conception of a Wall of Faces exhibit as part of the planned Education Center at the Wall.
Photo Credit: Courtesy of the Vietnam Veterans Memorial Foundation
What began as "Faces Never Forgotten" has become the "Wall of Faces," where the Vietnam Veterans Memorial Fund hopes to someday host an image and online landing page to correspond with every name on that granite wall.

As of late October, the VVMF had posted nearly 49,000 images, with less than 10,000 to go before the collection reaches its goal. As part of Military Times’ monthlong celebration of veterans, we’re partnering with the VVMF in its quest to finish The Wall of Faces (#FinishtheWall).

Think you might be able to help, or want to know more? Some answers to common questions, with information provided by VVMF Communications Director Heidi Zimmerman:

I have a photo to submit. How do I do it?

The easiest way is through The Wall of Faces itself – go to www.vvmf.org/Wall-of-Faces and find the name of the service member in question. Click on the "submit photo" button on the profile page and follow the directions.

The online database is searchable by home of record, state, service branch and other criteria, so if you’re checking on gaps that need filled from your hometown or county, for example, you should be able to narrow the field in a few clicks.

The service member already has a photo. Should I submit a new one anyway?

Yes. Many service members have multiple images associated with their profile pages that can help tell their stories. And it’s not just official military pictures, either – some have wedding or family photos and many, in a nod to the average age of the fallen, are represented by shots from high school yearbooks.

I have a non-digital photo to submit. Now what?

The foundation will accept old snapshots, etc., but will not return them. Organizers suggest sending the highest-resolution copy you can procure – a glossy 8-by-10, if at all possible. Print and fill out a photo submission form (available at www.vvmf.org/how-to-submit) and mail the package to Vietnam Veterans Memorial Fund, Attn: The Wall of Faces, 1235 South Clark Street, Suite 910, Arlington, VA 22202.

How else are photos sourced?

The VVMF’s mobile Vietnam Wall replica, known as The Wall That Heals, travels the country; workers can scan in photos on site. The group also staffs Vietnam reunions where they can collect images, and some individuals have volunteered their time to pursue them either in person or via social media.

How are photos vetted?

"Sometimes there is no family left to confirm we’ve got the right person," she said in an email. "We’ve had instances where a family member comes forward and says, ‘Hey, that’s not my brother!’ We immediately go back and trace the steps to figure out what went wrong where."

Common names, ages and hometowns can create problems, she said, as can group or unit photos from in theater, where troops may have been misidentified decades earlier.

Where has response been the strongest?

At least one image of each service member in The Wall of Faces with a home of record in these 17 states has been collected: Alaska, Colorado, Hawaii, Idaho, Maryland, Minnesota, Montana, Nebraska, Nevada, New Mexico, North Dakota, Oregon, South Dakota, Utah, Washington, Wisconsin and Wyoming.

Does The Wall of Faces exist offline?

Not yet. Plans for the Education Center at the Wall include The Wall of Faces as part of about 35,000 square feet of exhibitions. Other planned features will walk visitors through the history of the war, show how The Wall’s design came to fruition, and display some of the hundreds of thousands of objects left at the memorial by family members, battle buddies and others.

The VVMF continues to seek donations for the center, with an expected price tag surpassing $100 million – none of that coming from public funding. The project held its ceremonial groundbreaking in 2012, though actual construction on a patch of land between The Wall and the Lincoln Memorial has yet to begin.

Where can I learn more?

To see the Wall of Faces or to learn more about related programs or donation opportunities, visit www.vvmf.org.

How can I spread the word?

Already sent in your image for the Wall of Faces, or have another message of support to share? Post it on social media and include the hashtag #FinishTheWall. Military Times will share some of these images with our Twitter and Facebook followers throughout November.

More In Salute to Veterans

The four bills all passed Congress with broad bipartisan support.

Marcella Lebeau was born in 1919 and grew up in Promise, South Dakota, as a member of the Cheyenne River Sioux Tribe.

A Camp Pendleton, California, military policeman was struck and killed early Monday morning while attempting to help other motorists on the side of the road.

Biden-Putin square off as tension grows on Ukraine border

Face to face for over two hours, President Joe Biden and Russia’s Vladimir Putin squared off in a secure video call Tuesday.

The Senate Judiciary Committee held a hearing Tuesday on closing the military prison in Guantanamo Bay.

The Army plans for large-scale combat and the likely high casualties that come with it.

‘I regret I did not tell our families not to drink the water,’ Hawaii joint base commander says

Biden-Putin square off as tension grows on Ukraine border