David Longenbach and The Conversation Via Ap
April 4, 2017

On April 6, 1917, the United States declared war against Germany and entered World War I. Since August 1914, the war between the Central and Entente Powers had devolved into a bloody stalemate, particularly on the Western Front. That was where the U.S. would enter the engagement.

How prepared was the country’s military to enter a modern conflict? The war was dominated by industrially made lethal technology, like no war had been before. That meant more death on European battlefields, making U.S. soldiers badly needed in the trenches. But America’s longstanding tradition of isolationism meant that in 1917 U.S. forces needed a lot of support from overseas allies to fight effectively.

In Europe, American combat troops would encounter new weapons systems, including sophisticated machine guns and the newly invented tank, both used widely during World War I. American forces had to learn to fight with these new technologies, even as they brought millions of men to bolster the decimated British and French armies. 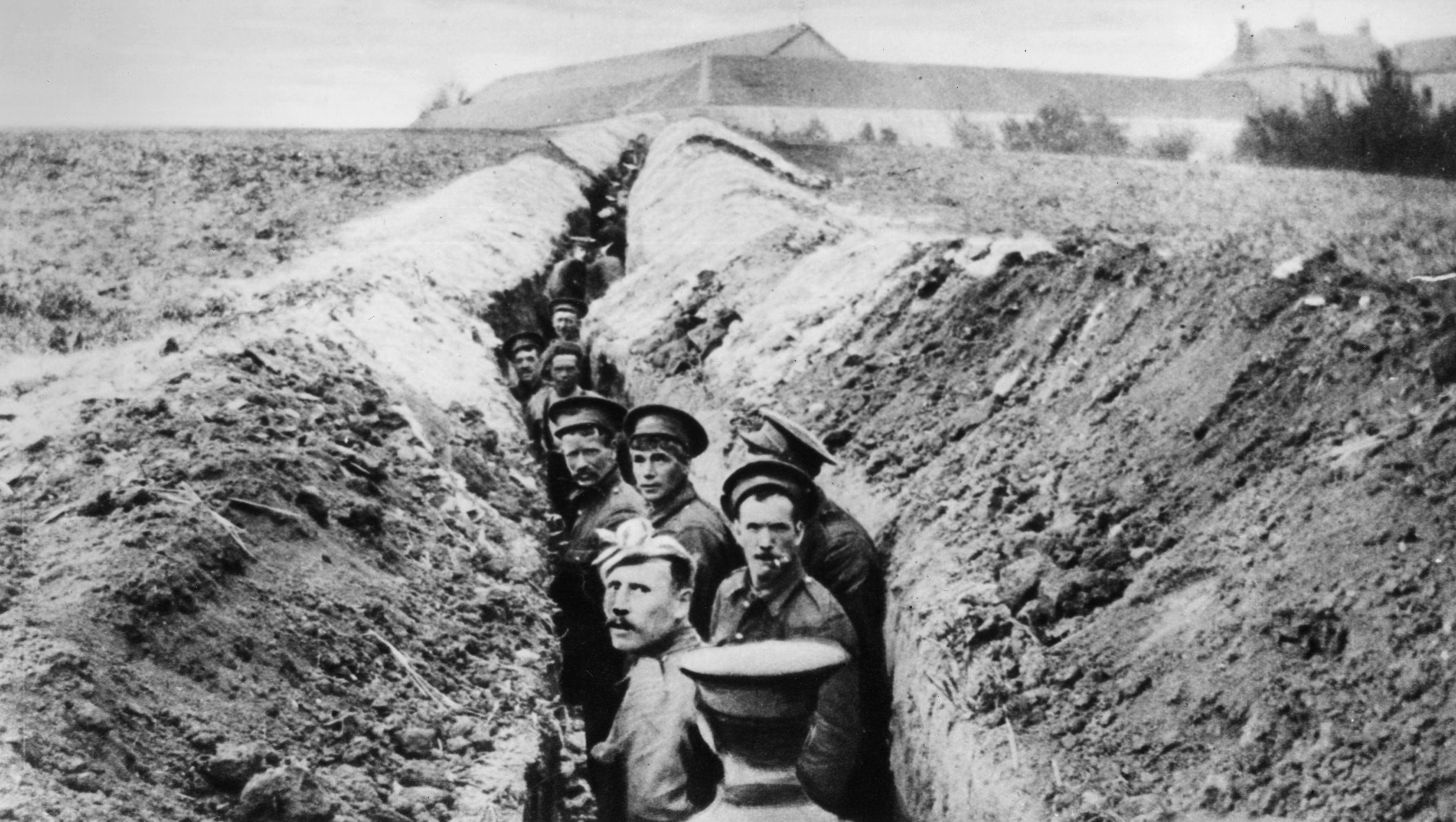 On Oct. 28, 1914, British soldiers lined up in a narrow trench during World War I.
Photo Credit: Hulton Archive/Getty Images

In certain areas of military technology, the United States was well-prepared. The basic infantrymen of the U.S. Army and Marine Corps were equipped with the Model 1903 Springfield rifle. Developed after American experience against German-made Mausers in the Spanish American War, it was an excellent firearm, equal or superior to any rifle in the world at the time.

The Springfield offered greater range and killing powerthan the U.S. Army’s older 30-40 Krag. It was also produced in such numbersthat it was one of the few weapons the U.S. military could deploy with to Europe.

Machine guns were another matter. In 1912, American inventor Isaac Lewis had offered to give the U.S. Army his air-cooled machine gun designfor free. When he was rejected, Lewis sold the design to Britain and Belgium, where it was mass-produced throughout the war.

With far more soldiers than supplies of modern machine guns, the U.S. Army had to adopt several systems of foreign design, including the less-than-desirable French Chauchat, which tended to jam in combat and proved difficult to maintain in the trenches.

circa 1918: French Renault FT-17 light tanks at the battle front. This type of tank entered service in May 1918, during the Battle of the Forest of Retz. (Photo by Hulton Archive/Getty Images)

French Renault FT-17 light tanks at the battle front. This type of tank entered service in May 1918, during the Battle of the Forest of Retz.

American soldiers fared better with the Great War’s truly new innovation, the tank. Developed from the need to successfully cross "No Man’s Land" and clear enemy-held trenches, the tank had been used with limited successin 1917 by the British and the French. Both nations had combat-ready machines available for American troops.

After the U.S. entered the war, American industry began tooling up to producethe French-designed Renault FT light tank. But the American-built tanks, sometimes called the "six-ton tank," never made it to the battlefields of Europe before the Armistice in November 1918.

Instead, U.S. ground forces used 239 of the French-built versions of the tank, as well as 47 British Mark V tanks. Though American soldiers had never used tanks before entering the war, they learned quickly. One of the first American tankers in World War I was then-Captain George S. Patton, who later gained international fame as a commander of Allied tanks during World War II.

FILE - In this May 25, 1998 file photo, poison gas bombs from World War I await dismantling in Poelkapelle, Belgium. A century after German troops opened the taps on a line of chlorine tanks to send a poisonous cloud drifting across no man's land and into World War I Allied trenches, chemical warfare has come full circle. A report last year set up by the Organization for the Prohibition of Chemical Weapons said a toxic chemical, almost certainly chlorine, was used repeatedly in attacks on villages in Northern Syria. (AP Photo/Yves Logghe, File)

In this May 25, 1998 file photo, poison gas shells from World War I await dismantling in Poelkapelle, Belgium.

Also new to Americans was poison gas, an early form of chemical warfare. By 1917 artillery batteries on both sides of the Western Front commonly fired gas shells, either on their own or in combination with other explosives. Before soldiers were routinely equipped with gas masks, thousands died in horrific ways, adding to the already significant British and French casualty totals.

Scientists on both sides of the war effort worked to make gas weapons as effective as possible, including by devising new chemical combinationsto make mustard gas, chlorine gas, phosgene gas and tear gas. The American effort was substantial: According to historians Joel Vilensky and Pandy Sinish, "Eventually, more than 10 percent of all the chemists in the United States became directly involved with chemical warfare research during World War I."

Officers and crew stand on deck around the conning tower of the United States Navy submarine USS L-3 (SS-42) whilst on patrol on 13 December 1913 off Hampton Roads, Virginia, United States.

Naval power for combat and transport

All the manpower coming from the U.S. would not have meant much without safe transportation to Europe. That meant having a strong navy. The U.S. Navy was the best-prepared and best-equipped of all the country’s armed forces. For many years, it had been focusing much of its energy on preparing for a surface naval confrontation with Germany.

But a new threat had arisen: Germany had made significant progress in developing long-range submarines and devising attack tacticsthat could have posed severe threats to American shipping. German Navy U-boats had, in fact, devastated British merchant fleets so badly by 1917 that British defeat was imminent.

In May 1917, the British Royal Navy pioneered the convoy system, in which merchant ships carrying men and materiel across the Atlantic didn’t travel alone but in large groups. Collectively protected by America’s plentiful armed escort ships, convoys were the key to saving Britain from defeat and allowing American ground forces to arrive in Europe nearly unscathed. In fact, as military historian V.E. Tarrant wrote, "From March 1918 until the end of the war, two million U.S. troops were transported to France, for the loss of only 56 lives."

American flying ace Eddie Rickenbacker (1890 - 1973) sits in his Nieuport 28 fighter plane and smiles at the camera, 1910s. Dubbed America's 'Ace of Aces,' Rickenbacker had 26 victories in battle and was part of the first all-American air unit to see combat duty in World War I, the 94th Aero Pursuit Squadron. In this shot, great detail of the plane's armament can be seen. (Photo by Hulton Archive/Getty Images)

American flying ace Eddie Rickenbacker (1890 - 1973) sits in his Nieuport 28 fighter plane and smiles at the camera, 1910s. Dubbed America's 'Ace of Aces,' Rickenbacker had 26 victories in battle and was part of the first all-American air unit to see combat duty in World War I, the 94th Aero Pursuit Squadron.

Taking to the skies

Some of those Americans who made it to Europe climbed above the rest – right up into the air. The U.S. had pioneered military aviation. And in 1917, air power was coming into its own, showing its potential well beyond just intelligence gathering. Planes were becoming offensive weaponsthat could actively engage ground targets with sufficient force to make a difference on the battlefield below.

But with fewer than 250 planes, the U.S. was poorly prepared for an air warin Europe. As a result, American pilots had to learn to fly British and French planes those countries could not man.

Despite often lacking the weapons and technology required for success, it was ultimately the vast number of Americans– afloat, on the ground and in the air – and their ability to adapt and use foreign weapons on foreign soil that helped turn the tide of the war in favor of the Allies.

This article was originally published on The Conversation

The Army chief has made transformational change a key goal of his—but is it doable? Plus, we’ll look at details on the Polish F-35 buy—and get an update on Navy shipbuilding.
Close
Now Playing