Congress sent President Barack Obama legislation to give the Congressional Gold Medal to World War II spies who served behind enemy lines in Nazi Germany and the Pacific theater.

A predecessor to the Central Intelligence Agency, the Office of Strategic Services was formed in 1942 and at one point employed almost 13,000 men and women recruited from all branches of the military. Famous members include actor Sterling Hayden and director John Ford, baseball player Mo Berg, chef Julia Child and future CIA director William Casey.

Estimates of how many OSS members are still alive range from a few dozen to 100. (In the photo above, Frank Gleason, 96, a retired colonel with the Office of Strategic Services, shows the OSS memorabilia on the wall of his Atlanta home.)

Legislation to award the spies the medal had passed the Senate and had more than 300 sponsors in the House, but was held up by House Republican rules that required a special waiver to grant the medal to groups of people. Lawmakers were concerned too many of the medals were being given out and the prestige of the award was waning.

After lobbying by some of the spies themselves — many in their 90s — House Majority Leader Kevin McCarthy, R-Calif., this month secured the waiver, which required sign off from all members of Republican leadership. 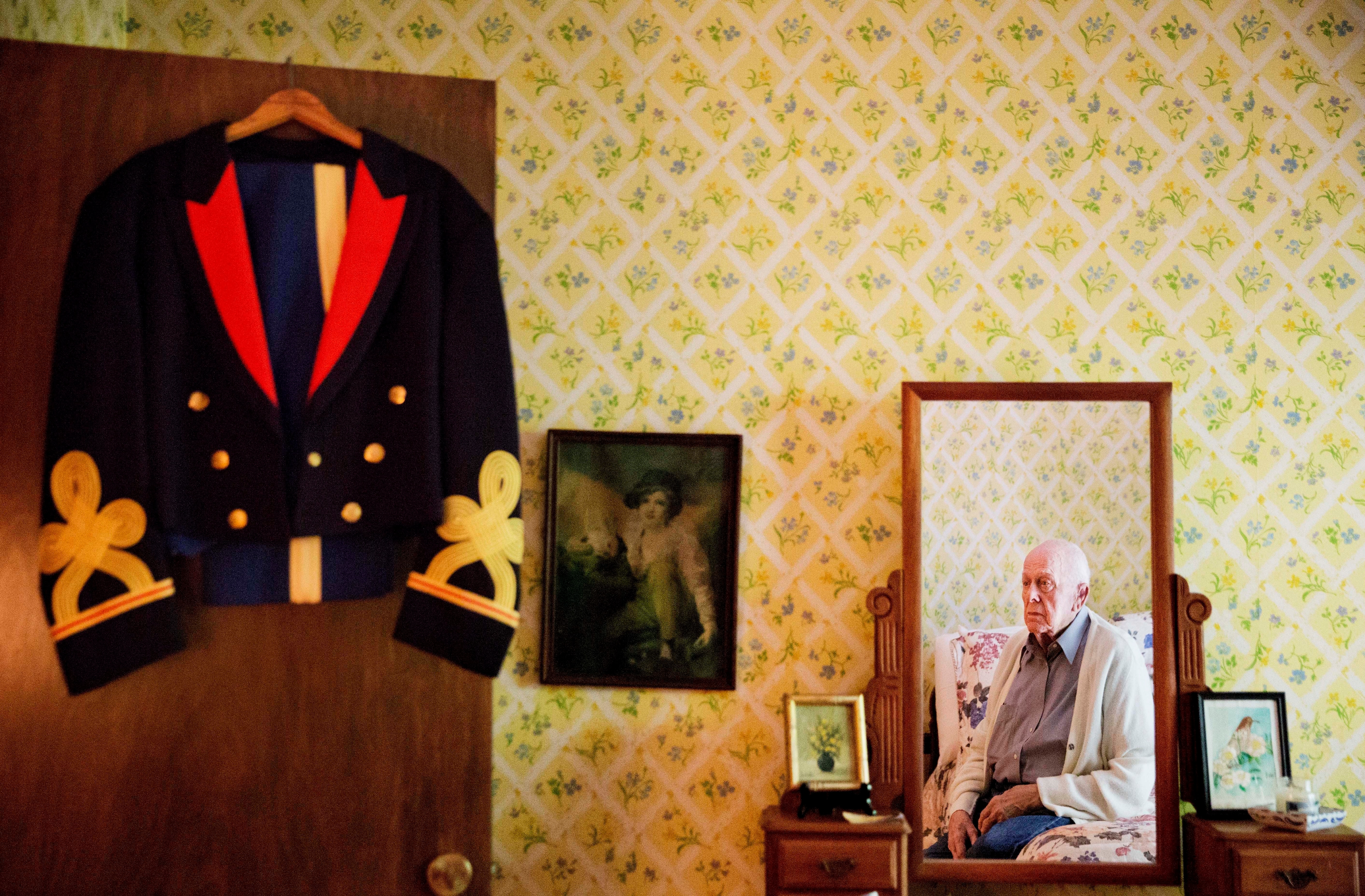 Frank Gleason, 96, a retired colonel with the Office of Strategic Services, looks at his old blue mess dress uniform hanging on a door as he sits in his home in Atlanta on Sept. 28.
Photo Credit: David Goldman/AP
The House passed the legislation Wednesday by voice vote, along with two separate bills granting the medal to Filipino veterans and Merchant Marines in World War II. The legislation granting the Filipino veterans' medal will also head to Obama's desk, while the Merchant Marine legislation is awaiting Senate action.

"As we enter into uncharted waters with the incoming administration, I hope that we will all take pause and heed the lessons of the OSS and remember that America is at its best when we work together with our longstanding allies and when we recruit diverse personnel to serve our government," said Rep. Bill Foster, D-Ill.

"From establishing intelligence networks deep behind enemy lines to bolstering resistance organizations throughout Europe and Asia, these intelligence officers played a critical role in securing the Allied victory," he said.

After years of lobbying, many of the OSS members became frustrated as the bill continued to stall.

Hugh Montgomery, 93, of McLean, Va., served in the OSS during World War II and watched from the House visitors gallery as the chamber debated the bill. Montgomery jumped into Normandy on D-Day with the 82nd Airborne and was among the first Americans to enter the Buchenwald concentration camp.

"Far too long," he said, when asked afterward what he thought about Congress approving the medal.

"It was sorely needed," Montgomery said of the OSS. "We had to fight and win the war."

Two members of the Joint Chiefs of Staff have contracted COVID-19.

The National Guard says that its troops aren't subject to the policy when they're not on federal status.

Chief of Naval Operations Adm. Mike Gilday said the Navy’s funding levels have remained “flat relative to inflation for over a decade."

Litchfield officials are concerned that allowing the ribbons opens the door to any displays of free speech, no matter how hateful or offensive.

Plans to deploy the software in Ohio in March are being pushed back almost two months.

The attack took place a short distance from Al-Dhafra Air Base, a military installation that hosts U.S. and French forces.

U.S. Indo-Pacific Command said the missiles did not pose an immediate threat to U.S. personnel or territory, or to its allies.

Will the Russian Checkmate jet beat the F-35? | Actionable Intelligence

Where will the Medal of Honor memorial be? | Military Times reports