Military officials say these vehicles are not part of the U-S.-led coalition's aid to Kurdish allies on the ground who are currently engaged in a tense street-by-street urban battle in Raqqa — ISIS’s self-proclaimed capital.

The images of heavily armored American vehicles flowing into Syria emerge as the Kurdish fighters attempt to push closer to Raqqa's city center and their progress has slowed in recent days.

"The SDF [Syrian Democratic Forces] has reportedly encountered intensified resistance and 'better-emplaced defenses' over the past four weeks following initial rapid gains in districts on the outskirts of Ar-Raqqa City," according to a report of the latest assessment from the Institute for the Study of War.

The American-backed Kurdish fighters in Syria have taken heavy casualties, Davis said. Last week, three westerners, including two Americans who were not active-duty military service members, were killed in what was described as a mine explosion by sources on the ground. In all, Kurdish fighters with the People’s Protection Unit, or YPG, have lost 35 fighters in the month of July alone, according to YPG press releases. 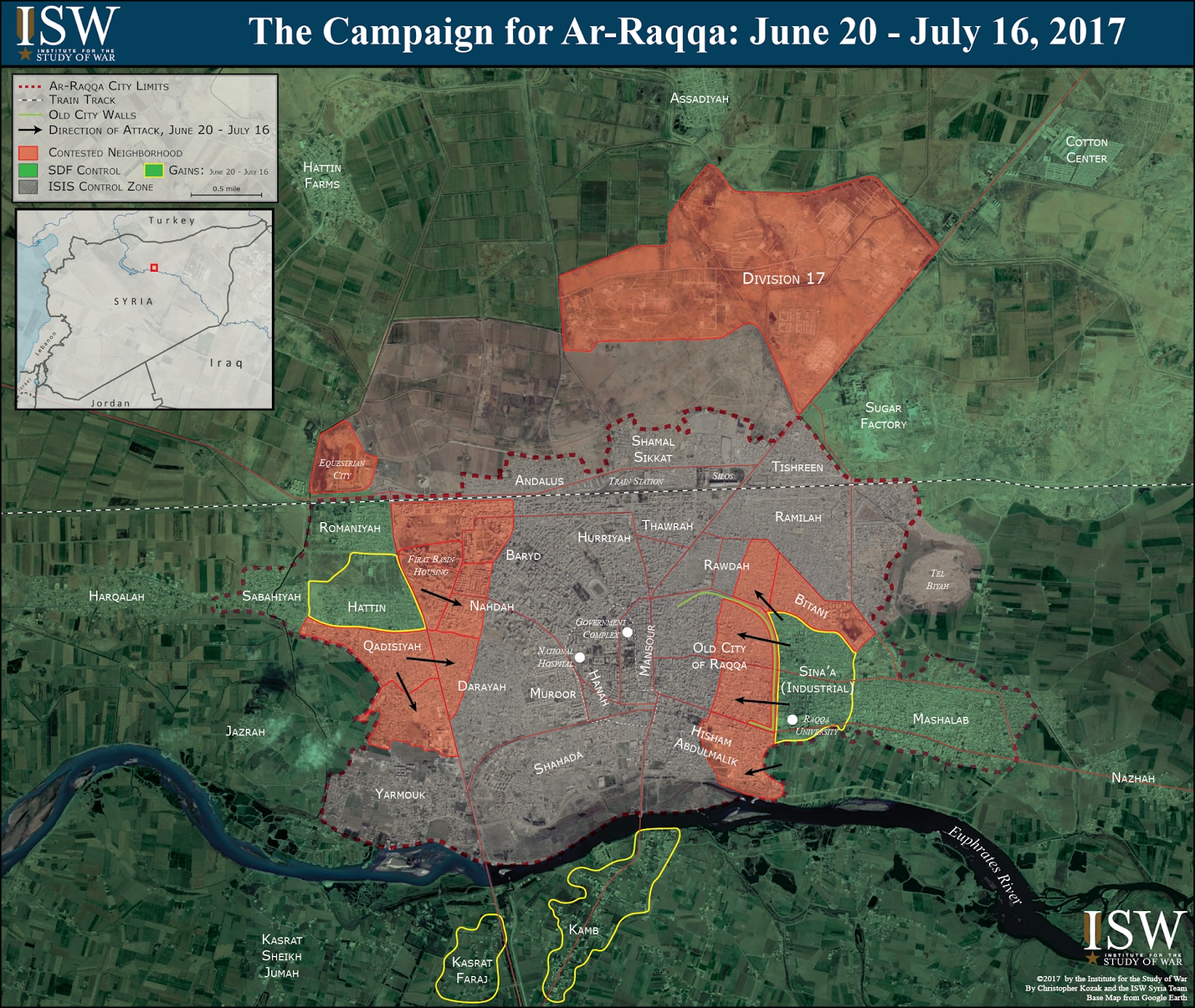 The Campaign for Ar-Raqqa City: June 20 – July 17, 2017.
Photo Credit: Courtesy of the Institute for the Study of War
"ISIS has extensively leveraged innovative tools to slow coalition advances, including drone-borne munitions and a new type of motion-activated IED," according to the ISW report.

Officials with Operation Inherent Resolve, which oversees American operations in Iraq and Syria, have push backed on claims that progress has slowed or stalled, calling the reports "not true."

"The SDF have not suspended military operations. In fact, over the course of the last week, the SDF have cleared more than 35 [square kilometers] of ISIS-held territory, in and around Raqqa," said the OIR official.

However, the videos of U.S. armored vehicles headed towards the embattled city of Raqqa calls into question the type of aid being delivered to the Kurdish allies and its adequacy to liberate the city from ISIS fighters.

However, American-made M-ATVs and MRAPs are not included in the aid package for the SDF. Also, pictures of the M-ATVs show mounts for the Common Remotely Operated Weapon Station, or CROWs system — a remotely operated weapons system that can be controlled by troops from inside the vehicle. CROWs systems are also not included in aid to Kurdish fighters.

These vehicles have commonly been operated by U.S special operations forces in Syria. The timing and appearance of the large convoys of M-ATVs calls into question their purpose.

When asked by Military Times about whether the U.S. was planning to increase troops in Syria or engage in a more active role beyond advising partner forces, OIR would not confirm or deny, citing operational security.

The clips also show armored bulldozers and earth movers. According to the Defense Department's fiscal year 2018 request for funds for the train-and-equip program for Syrian partner forces, these vehicles are included in aid to "vetted" Syrian groups.

Armored bulldozers have been instrumental in the fight against ISIS in Iraq and especially Mosul where more than 100 Caterpillar D7R dozers have been sent since 2015, according to a report by the Washington Post.

The bulldozers in Iraq were used to help move Iraqi forces block by block in Mosul, while also helping create ad-hoc defenses.

According to the Syrian Observatory for Human Rights — a human rights watchdog reporting on the conflict in Syria — Kurdish forces have entered the Yarmouk district in Raqqa, where clashes are ongoing.

"The Coalition has anticipated the battle to liberate Raqqa will be tough and may take some time," said an official at OIR. However, ISIS fighters in Raqqa "will eventually be defeated… this is certain."

President Joe Biden has invoked the Defense Production Act to speed production of infant formula and has authorized flights to import supply from overseas.

But the Pentagon inspector general does not recommend any firings or adverse actions in response to the infractions.

The measure could be passed out of the chamber in the next few weeks and become law later this summer.

Air Force may allow another dash of ’stache

The decision isn't yet final, but may come as soon as Friday.

Despite no public proof that Master Chief Petty Officer of the Navy Russell Smith ever uttered such an edict, "lower your standards" has become an online rallying cry in recent weeks for those disillusioned with Navy life.

Guardians will be allowed to sport neck tattoos