New in 2017: The military will redefine who's too fat to serve

The Pentagon in 2017 is expected to unveil a new force-wide policy governing body-fat standards, rules likely to change how the military defines and evaluates body composition, and determines who's too fat to serve.

While the Pentagon establishes minimum requirements, allowing each of the services to enforce stricter standards if they choose, the looming change comes as military data suggests obesity rates among troops are growing at an alarming rate. Today, 7.8 percent of the military is clinically overweight. That's about one in every 13 troops.

That's way up from 2001, when it was just 1.6 percent of the total force, or one in 60 troops, according to Defense Department data. Obesity rates are highest among women, African Americans, Hispanics and older service members. 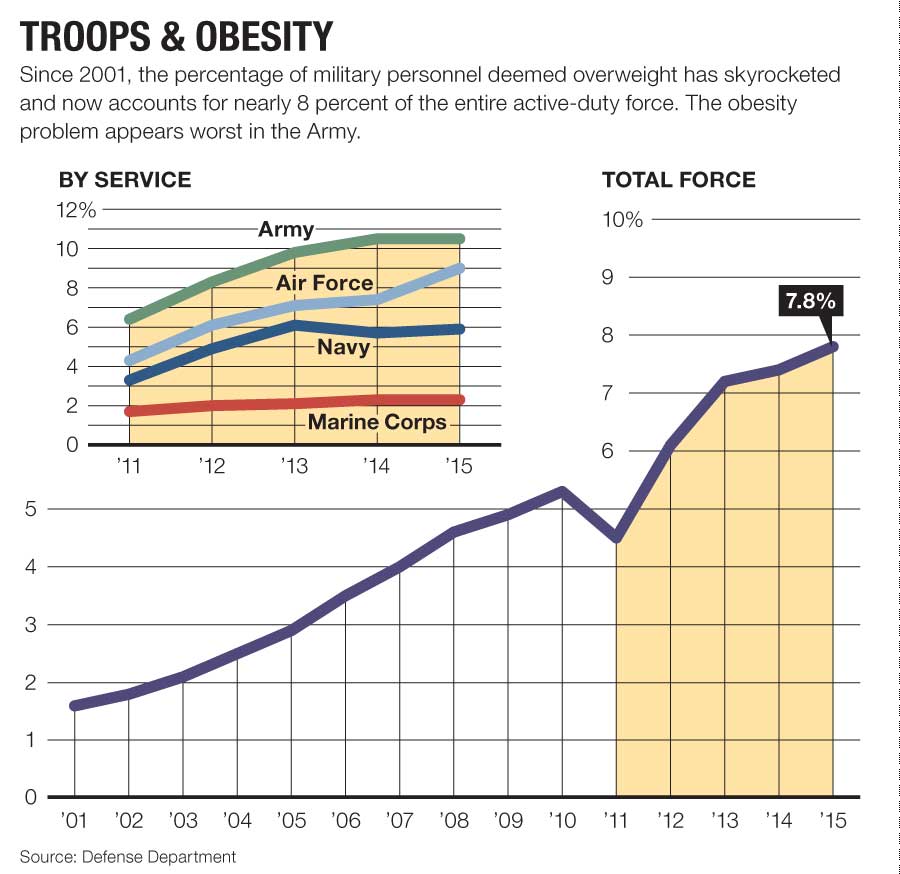 Pentagon officials familiar with the policy review say it is focused on the use of body-mass index, or BMI, which fails to account for different body types. BMI can signal that a bodybuilder is overweight because he or she has a lot of heavy muscle. Conversely, BMI can overlook out-of-shape personnel who are naturally tall and thin.

Current policy requires service members to maintain body fat levels below a key threshold: 28 percent for men and 36 percent for women. If they fail, they must undergo a "tape test" to estimate their body fat percentage.

Critics have long argued that tape test is flawed.

Tape test failures are recorded in official personnel records and can adversely affect troops' promotion prospects. Repeated failures can result in involuntary separation from the service.

Top military leaders say that while details of the policy might change, underlying fitness standards should not.

"If we do that, we have a potential liability on the battlefield," Command Sgt. Maj. John Troxell, the senior enlisted adviser to the chairman of the Joint Chiefs of Staff, said earlier this year. "The minute we lose that competitive advantage in combat because our enemies are training harder than we are, we’ll have more problems than we have right now."

Defense lawyers worked to sow doubt about the prosecution’s theory that former Green Beret Rick Rodriguez died because of his head injury.

Department leaders say the are confident the increases won't lead to longer wait times for appointments.

An airlift team quickly and successfully transported a premature baby from Kuwait to Germany for emergency medical care.

Northrop eyes low-rate production contract for B-21 this year

Northrop is wary of inflation and said more companies are pushing back on fixed-price contracts.

The soldier enlisted in 2016 through a program to recruit foreigners.