The thawing Arctic, and its potentially vast deposits of minerals and natural gas, is opening the global community to intense competition among major geopolitical players, a competition that a former top U.S. military commander in Europe believes is vital to U.S. and NATO interests.

For the U.S., the Arctic is "absolutely vital — not only nationally but in the context of NATO — [as] all Arctic nations, save only Russia, are NATO members, and Russia is building real military muscle in the high north," said retired Adm. James Stavridis in an interview with Military Times.

"There will be strategic competition over resources — hydrocarbons and shipping routes, primarily — and global warming will exacerbate them by exposing those resources," Stavridis said.

Stavridis, the current dean of the Fletcher School and a retired four-star admiral whose last command was Supreme Allied Commander Europe, believes the U.S. is far behind other competitors, namely Russia, in pursuing interests in the region.

According to the former Europe commander, the U.S. only has two icebreakers and is generally ill-prepared for Arctic operations.

To put it in context, Russia has 41 icebreakers in operation with plans to build more, according to reports from the Congressional Research Service.

The Coast Guard does have a second heavy polar icebreaker, Polar Sea. However, this vessel suffered an engine malfunction in 2010 and is out of service. To make matters worse, both Polar Star and Polar Sea are beyond their 30-year service life, having entered service in 1976 and 1978, respectively. 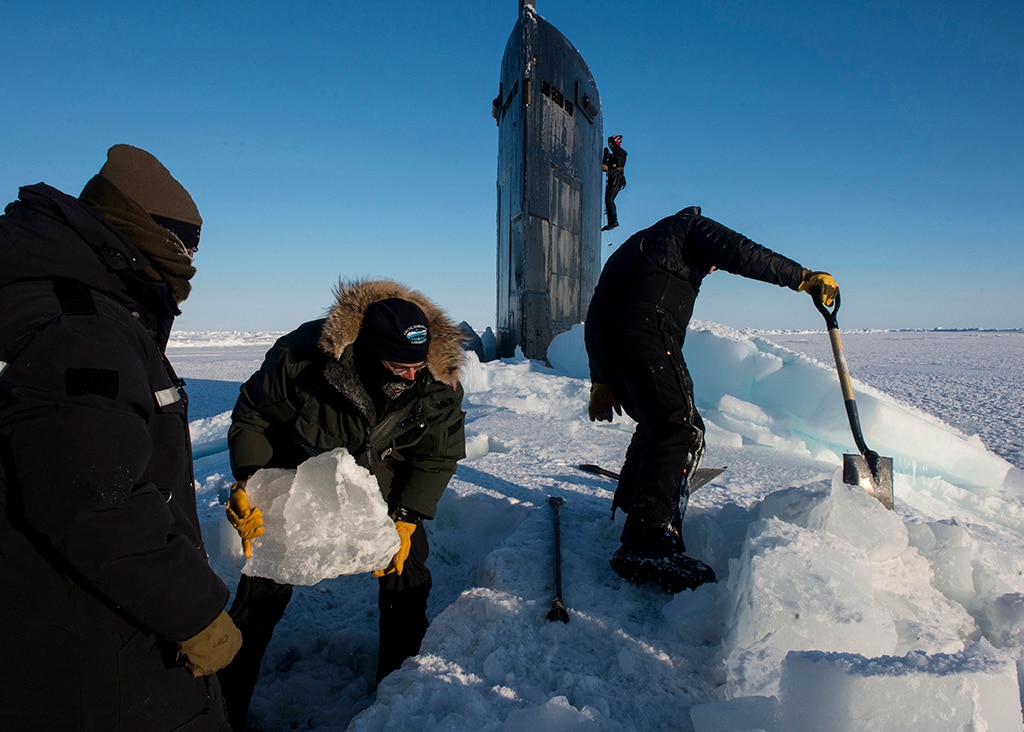 Sailors and civilians assigned to Arctic Submarine Lab clear the ice from the hatch of USS Hampton (SSN 767) during Ice Exercise (ICEX) 2016. The five-week exercise allows the U.S. Navy to assess operational readiness in the Arctic, increase experience in the region, advance understanding of the Arctic environment, and develop partnerships and collaborative efforts.
Photo Credit: Mass Communication Specialist 2nd Class Tyler Thompson/Navy
To remedy the situation, Congress has set aside $1 billion in funds in the 2017 annual defense authorization bill, which was signed by President Obama last Friday.

"Our FY2017 defense funding bill makes a critical investment in the long-delayed expansion of the U.S. icebreaker fleet," Sen. Thad Cochran, R-Miss., said.  "We must take assertive action to provide the vessels needed to protect American national security and economic interests in the Arctic region. The United States needs the capability to have year-round access to Polar Regions."

However, climate change is likely to accelerate tensions in the Arctic and construction of the new U.S. icebreakers will likely not conclude until 2020.

In 2016, Greenland’s ice surface melt ranked second, after only 2012, over the 37-year period of satellite record, which spanned 1979 to 2016, according to the National Oceanic and Atmospheric Administration, a government science agency focused on ocean and atmosphere research. Surface air temperature in the Arctic for 2016 was the highest since 1900, and new monthly record highs were recorded for January, February, October and November 2016.

With record Arctic temperatures and ice melt, "literally a new ocean is transforming before our eyes, and, first and foremost, that increases commercial and human activity and that requires a significant increase in search and rescue capabilities, maritime domain awareness to track vessels, and to prevent oil spills," Heather Conley, an expert in Arctic issues for the Center for Strategic and International Studies, told Military Times.

"We have energy exploration in the Russian and European Arctic, so just the very fact the change in climate has so drastically changed the Arctic, which is allowing greater activity, it requires a pretty significant response in infrastructure," she said. 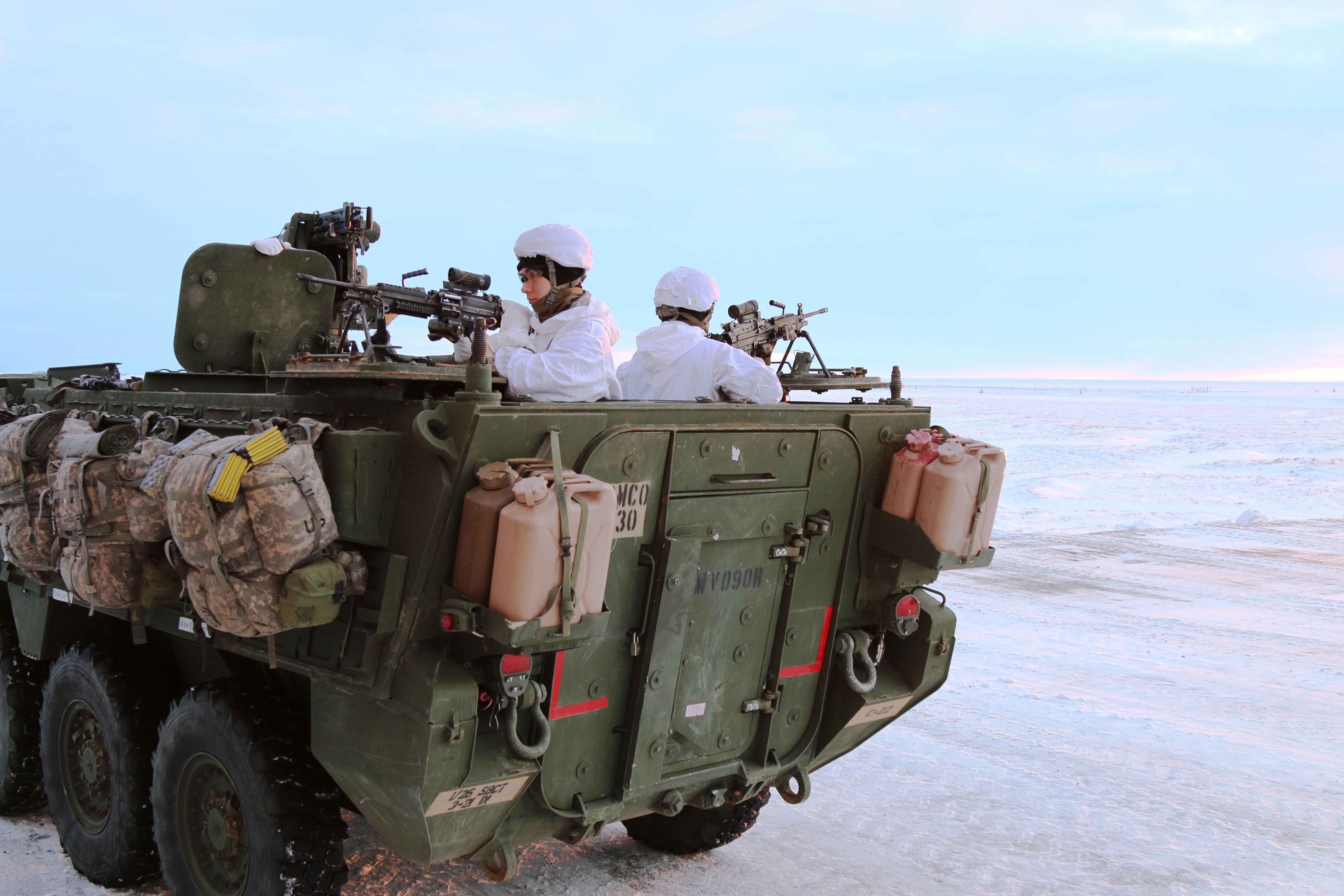 Recently, the U.S. has stepped up its presence in the region. Over the summer, Secretary of State John Kerry and Sen. Angus King, I-Maine, visited Norway and Greenland to witness the impact of climate change and to reassure NATO allies that the issue was on America's radar.

On the military front, U.S. soldiers and Marines have conducted extreme cold weather military training exercises in preparation for a potential military conflict in the harsh Arctic environment.

Last March, two Los Angeles-class submarines participated in Ice Exercise (ICEX), an exercise designed to test operational readiness of the submarine force while advancing scientific research. The exercise took place at U.S. Navy Ice Camp Sargo, a  station located on top of a an ice sheet in the Arctic.

Currently, submarine patrols and exercises in the Arctic are routine for the U.S; however, air and surface ship patrols are nearly non existent, due to the need for stronger hulls in the icy Arctic waters, as assessed in the U.S. Navy's Arctic Roadmap 2014-2030.

"We should work with allies for a balanced approach that begins with broad area surveillance, heightened monitoring, intelligence/information sharing with allies, regular patrols of air and sea (including underwater), mapping and scientific research," Stavridis said. "At the same time, we need a dialogue with Russia that hopefully can make the Arctic a zone of cooperation not of conflict."
About Shawn Snow

What’s missing from the conversation on Air Force recruiting?

The Air Force says it’s having one of the toughest recruiting stretches of the past quarter-century.

The last time the U.S. and South Korea conducted joint drills together with a U.S. aircraft carrier was in 2017.

In which a PO3 attains legendary status.

Fighter fleet is strained — and bill is coming due, ACC chief says

Air Combat Command head Gen. Mark Kelly said the 2018 Air Force We Need study, which called for 62 fighter squadrons, was on the money.

The VA recently said it will start providing abortions in certain circumstances, even in states where it's illegal or restricted.

"There's no better feeling than having a purpose." | Warrior Games Profile

Here’s how DoD is helping commissary shoppers save more money