THIMISTER-CLERMONT, Belgium — As a schoolboy three quarters of a century ago, Marcel Schmetz would regularly see open trucks rumble past to a makeshift American cemetery — filled with bodies, some headless, some limbless, blood seeping from the vehicles onto the roads that the U.S. soldiers had given their lives to liberate.

Sometimes, Schmetz said, there were over 200 bodies a day, casualties of one of the bloodiest and most important battles in World War II: The Battle of the Bulge which started 75 years ago on Monday and effectively sealed the defeat of Nazi Germany.

“It gave me nightmares,” Schmetz said. It also gave the 11-year-old the resolve that, one day, he would give something back.

Fast forward to 2019, when memories are fading and relations between Europe and the United States deteriorating.

There’s a rambling house and converted warehouse in the bucolic, verdant hills that were once among the worst killing grounds of World War II. Zoom in to the living-room table, where Marcel, 86, sits with his wife, Mathilde, and one of the many WWII veterans that have shared coffee and cake — and often a nip of something stronger — with them, telling stories that span generations.

“Well, I don’t share them very often,” said Arthur Jacobson, who was just 20 when he fought in the Battle of the Bulge. “Once in a while, somebody is interested and I tell them a little bit.”

In Marcel and Mathilde’s home, which also serves as the Remember Museum 39-45, “a little bit” doesn’t count. Soon the former Bazooka operator was sharing stories of friends lost, ties gained, all between a chuckle and a moist eye.

For M&M, as the couple is known to fans from across the United States, remembering has become a mission in life, since memory brings understanding and friendship. They are not alone. From the shores of Normandy, where the allies first landed on D-Day, to the forests deep in the Belgian Ardennes, there remains a deep appreciation for what the soldiers did. 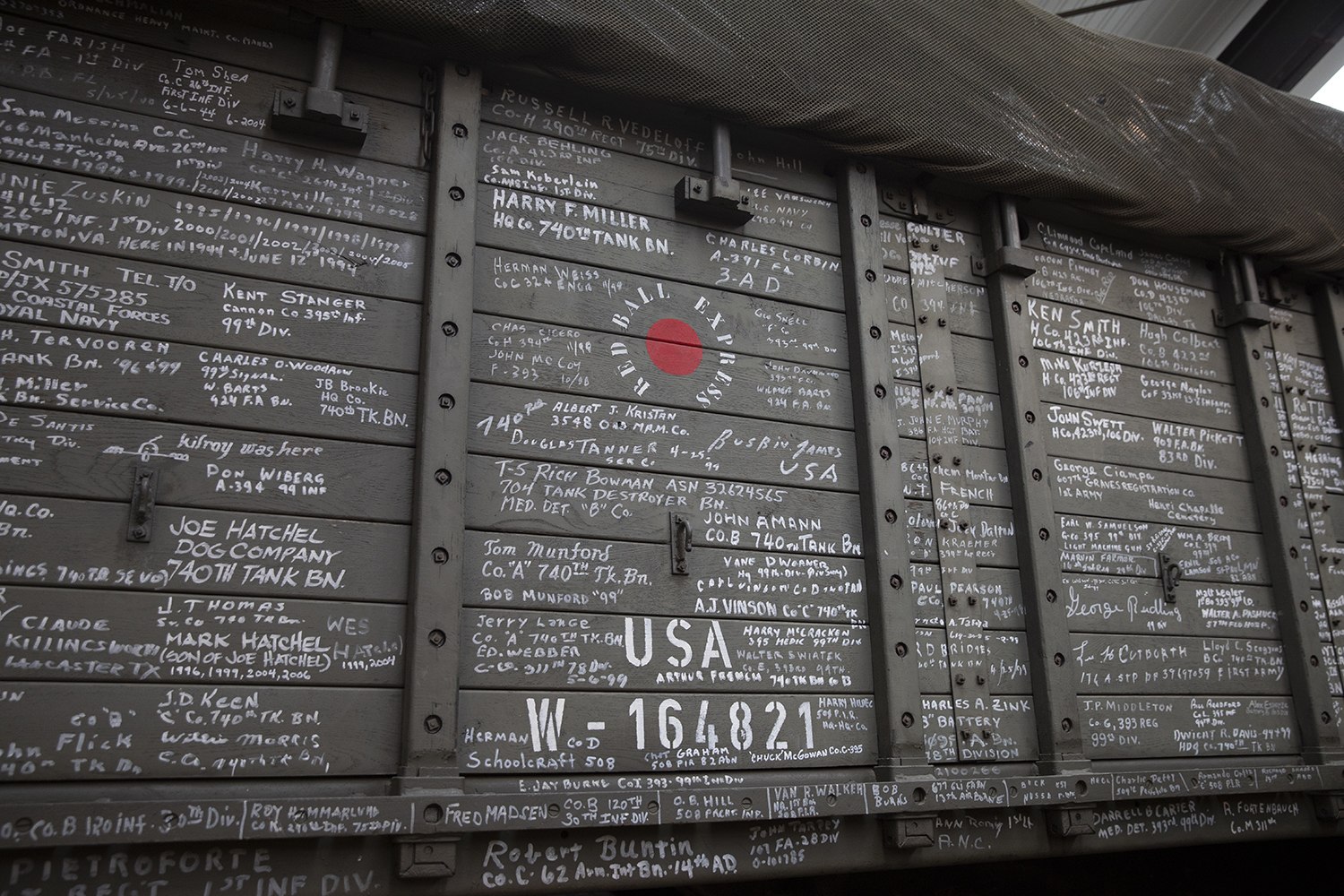 In this photo taken on Thursday, Nov. 7, 2019, names of veterans who have visited are written on the side of the U.S. Army truck, The Red Ball Express, at the Remember Museum 39-45 in Thimister-Clermont, Belgium. (Virginia Mayo/AP)
2 of 10 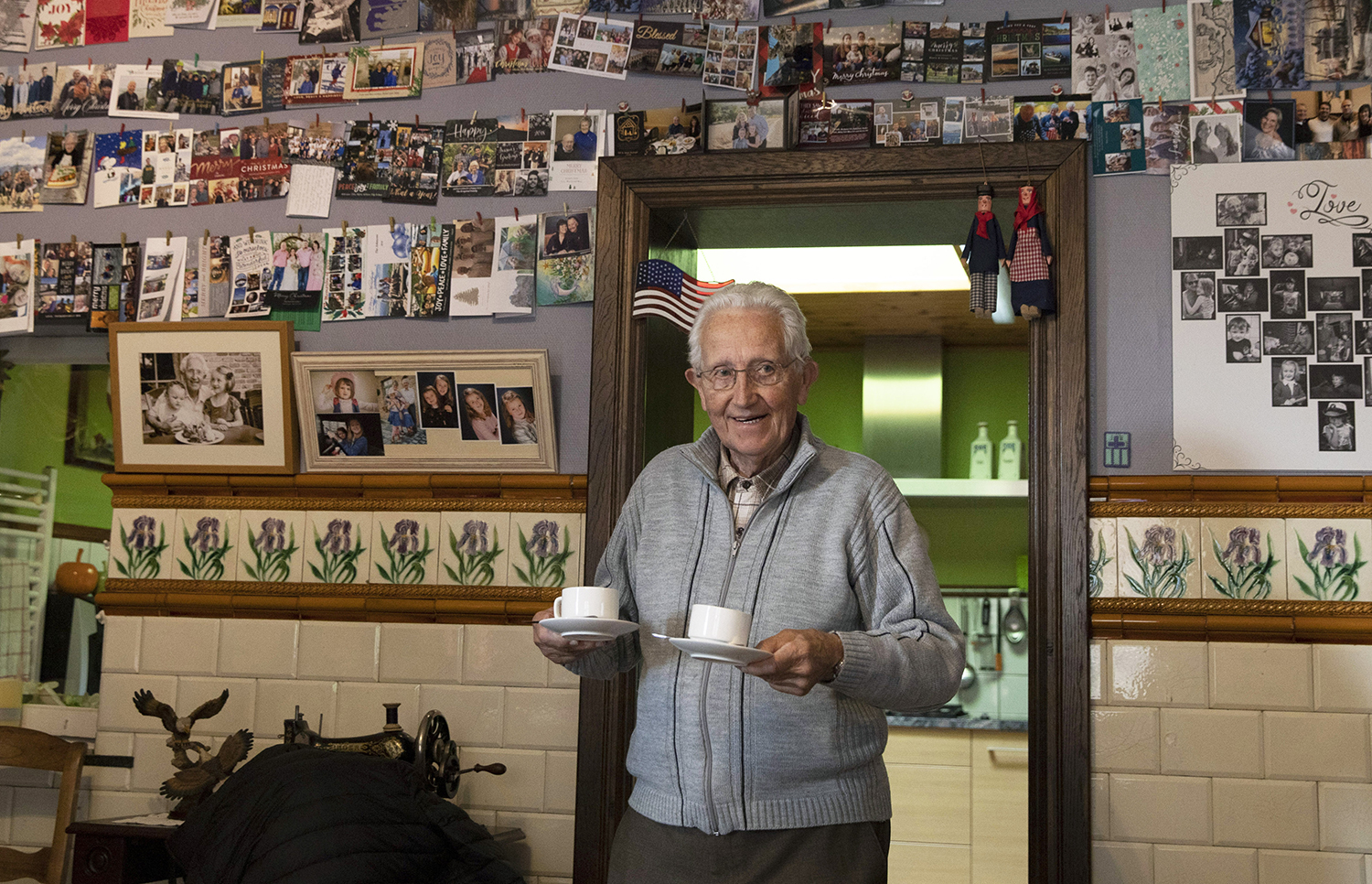 In this photo taken on Thursday, Nov. 7, 2019, Marcel Schmetz serves coffee from the kitchen of his house at the Remember Museum 39-45 in Thimister-Clermont, Belgium. (Virginia Mayo/AP)
3 of 10 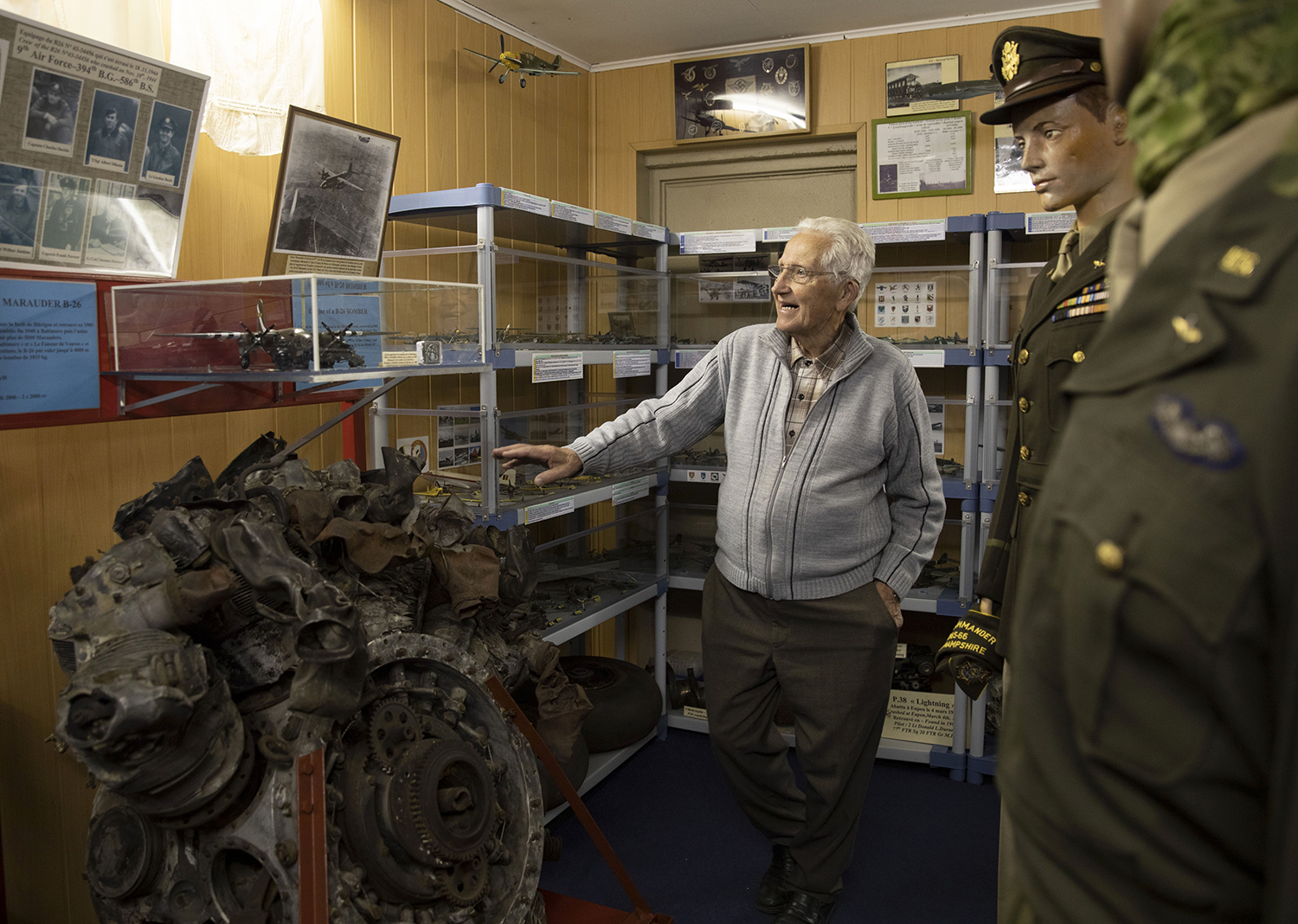 In this photo taken on Thursday, Nov. 7, 2019, Marcel Schmetz shows the motor of a crashed World War II Marauder B-26 at the Remember Museum 39-45 in Thimister-Clermont, Belgium. (Virginia Mayo/AP)
4 of 10 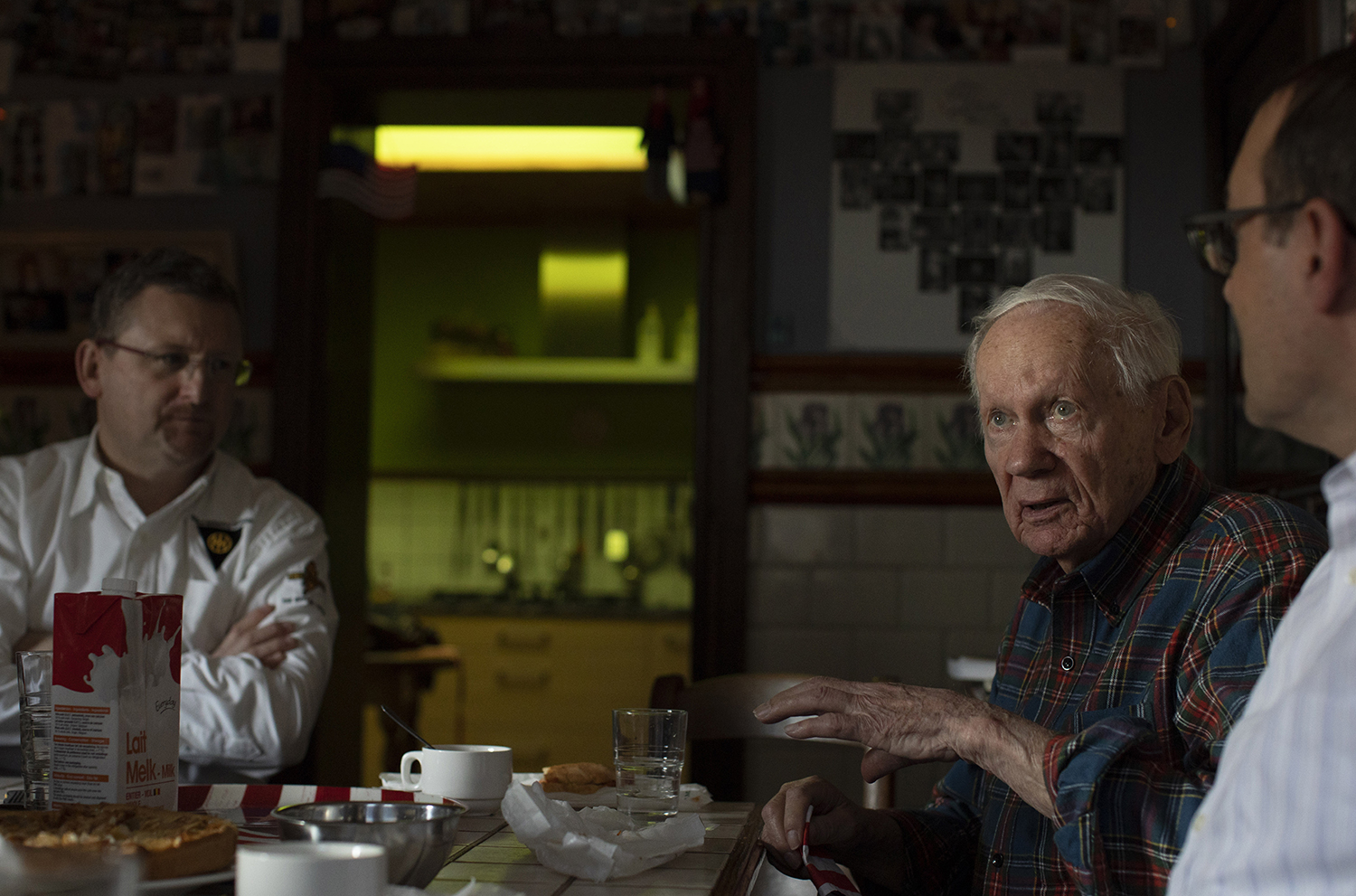 In this photo taken on Tuesday, Dec. 10, 2019, U.S. Battle of the Bulge veteran Arthur Jacobson second right, speaks during a lunch in the dining room of the Remember Museum 39-45 in Thimister-Clermont, Belgium. (Virginia Mayo/AP)
5 of 10 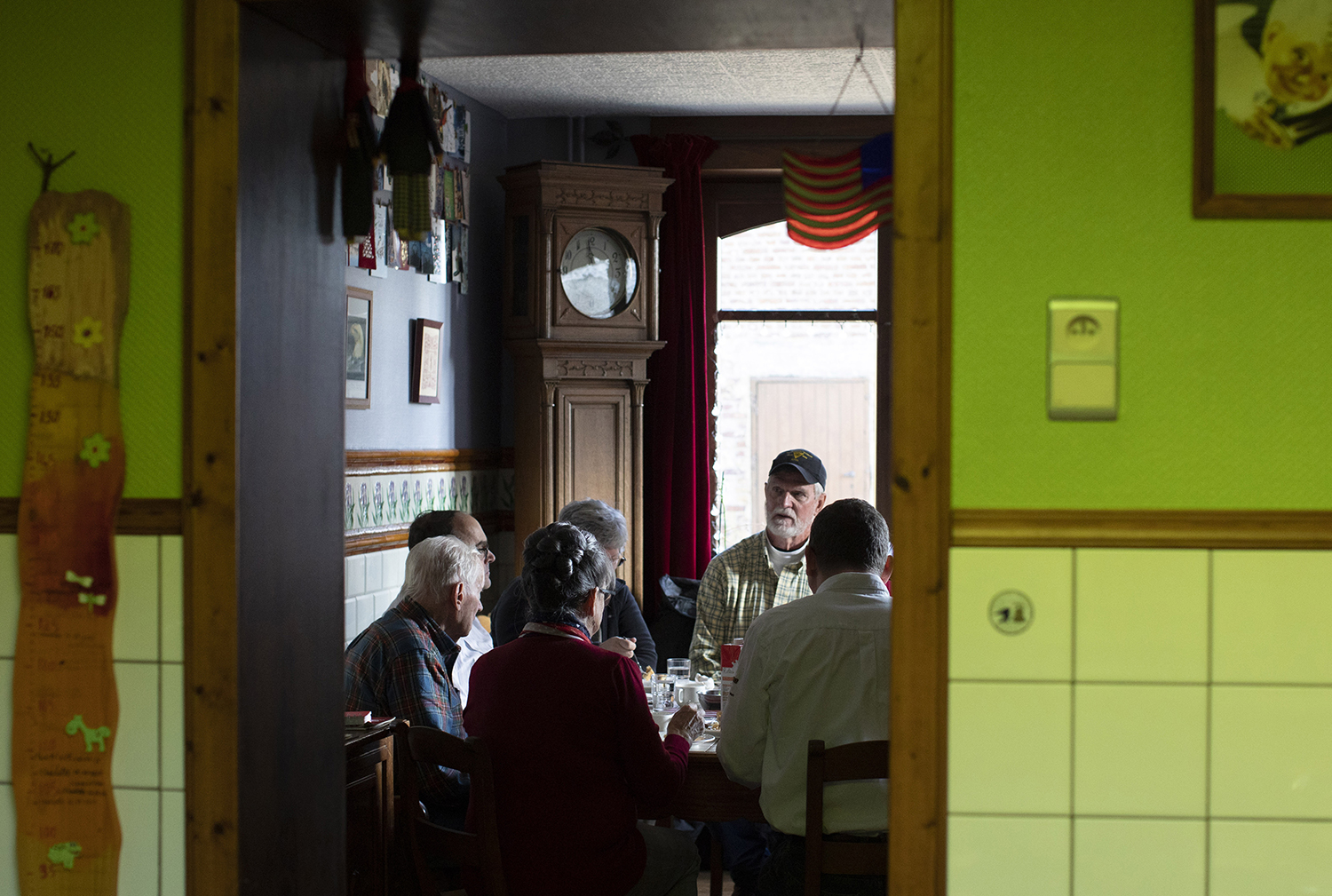 In this photo taken on Tuesday, Dec. 10, 2019, U.S. Battle of the Bulge veteran Arthur Jacobson, left, and his family have a lunch in the dining room of Remember Museum 39-45 directors Marcel and Mathilde Schmetz in Thimister-Clermont, Belgium.(Virginia Mayo/AP)
6 of 10 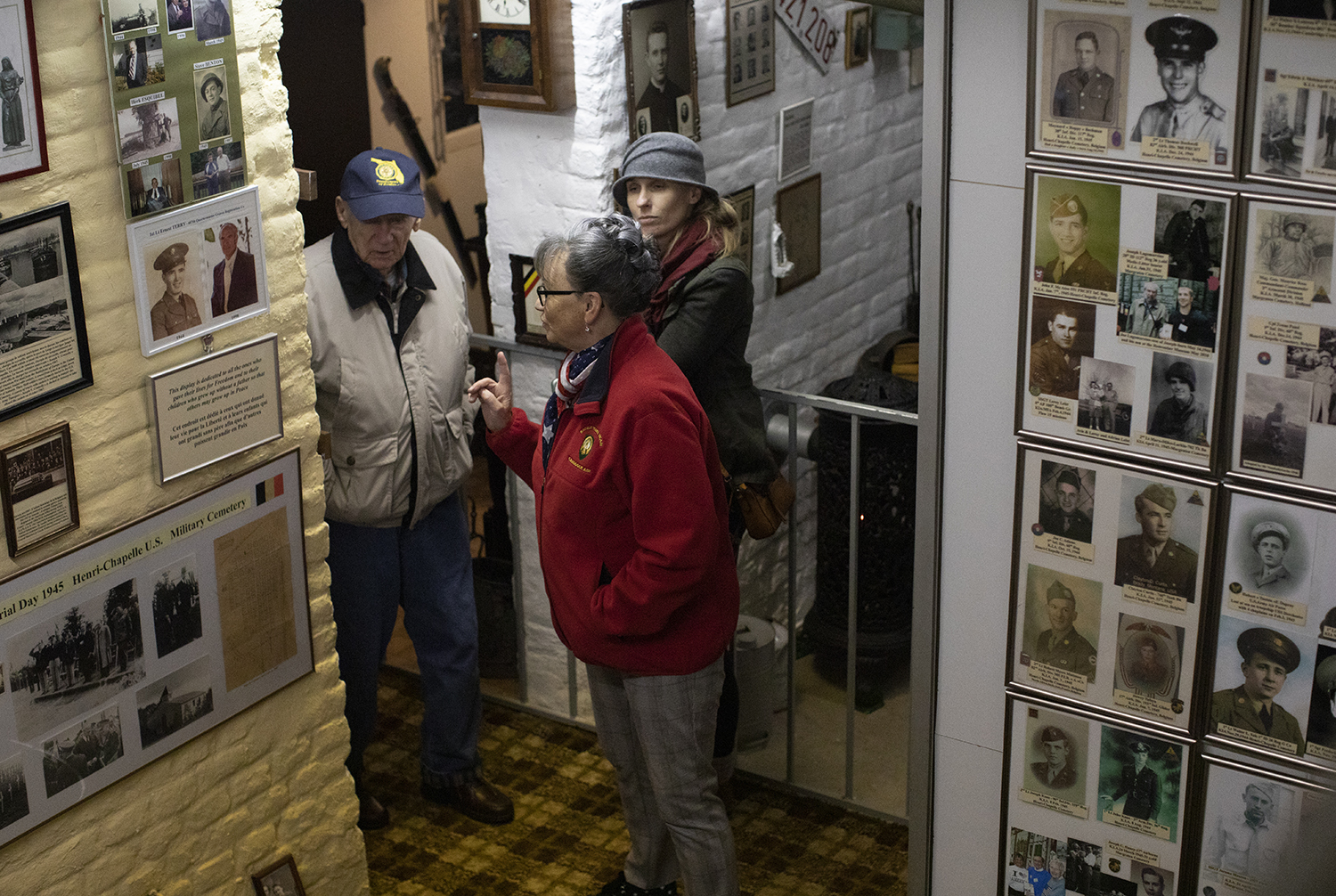 In this photo taken on Tuesday, Dec. 10, 2019, Mathilde Schmetz takes U.S. Battle of the Bulge veteran Arthur Jacobson, left, through the Remember Museum 39-45 in Thimister-Clermont, Belgium. (Virginia Mayo/AP)
7 of 10 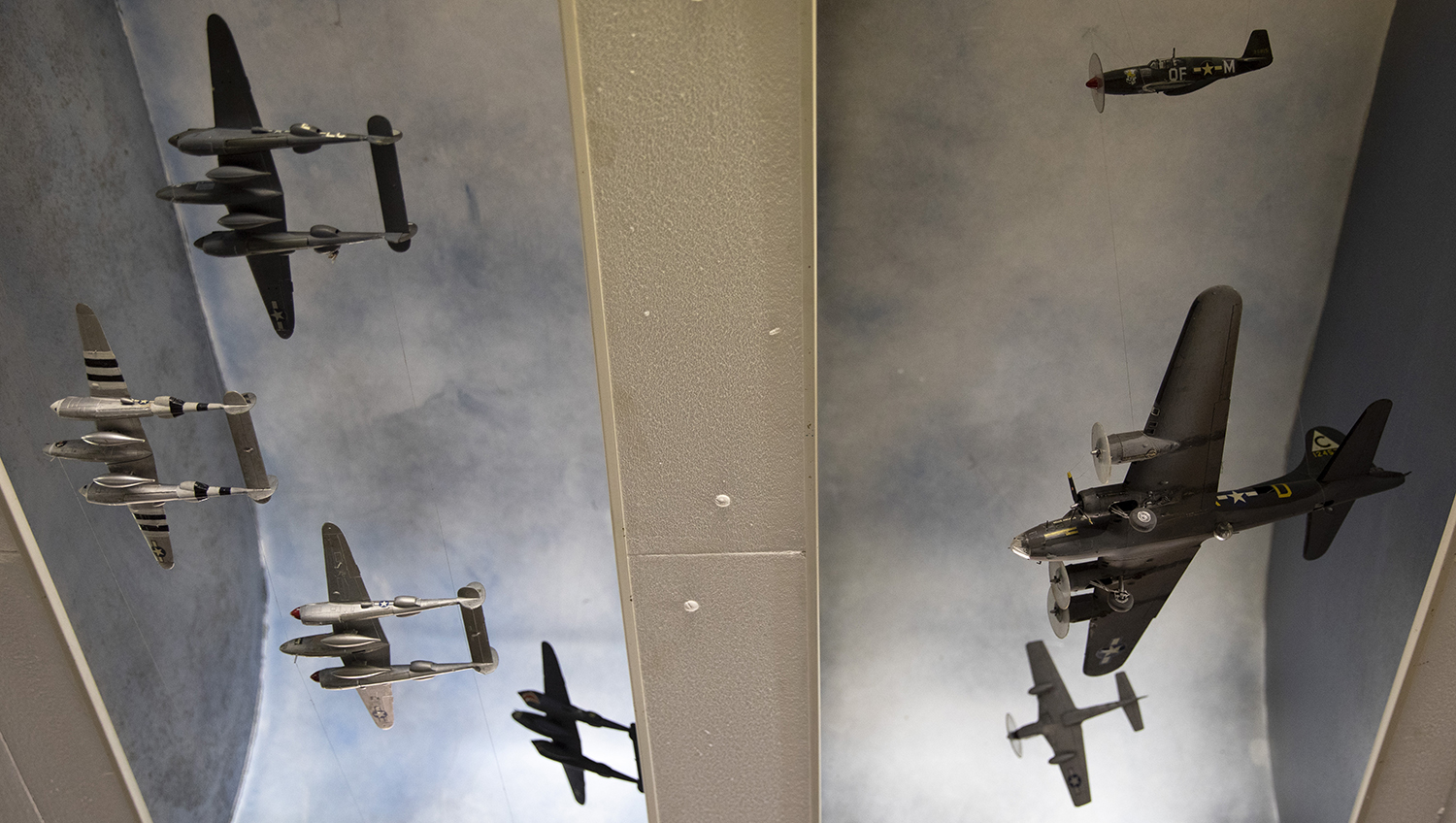 In this photo taken on Thursday, Nov. 7, 2019, a collection of World War II planes hang from the ceiling at the Remember Museum 39-45 in Thimister-Clermont, Belgium. (Virginia Mayo/AP)
8 of 10 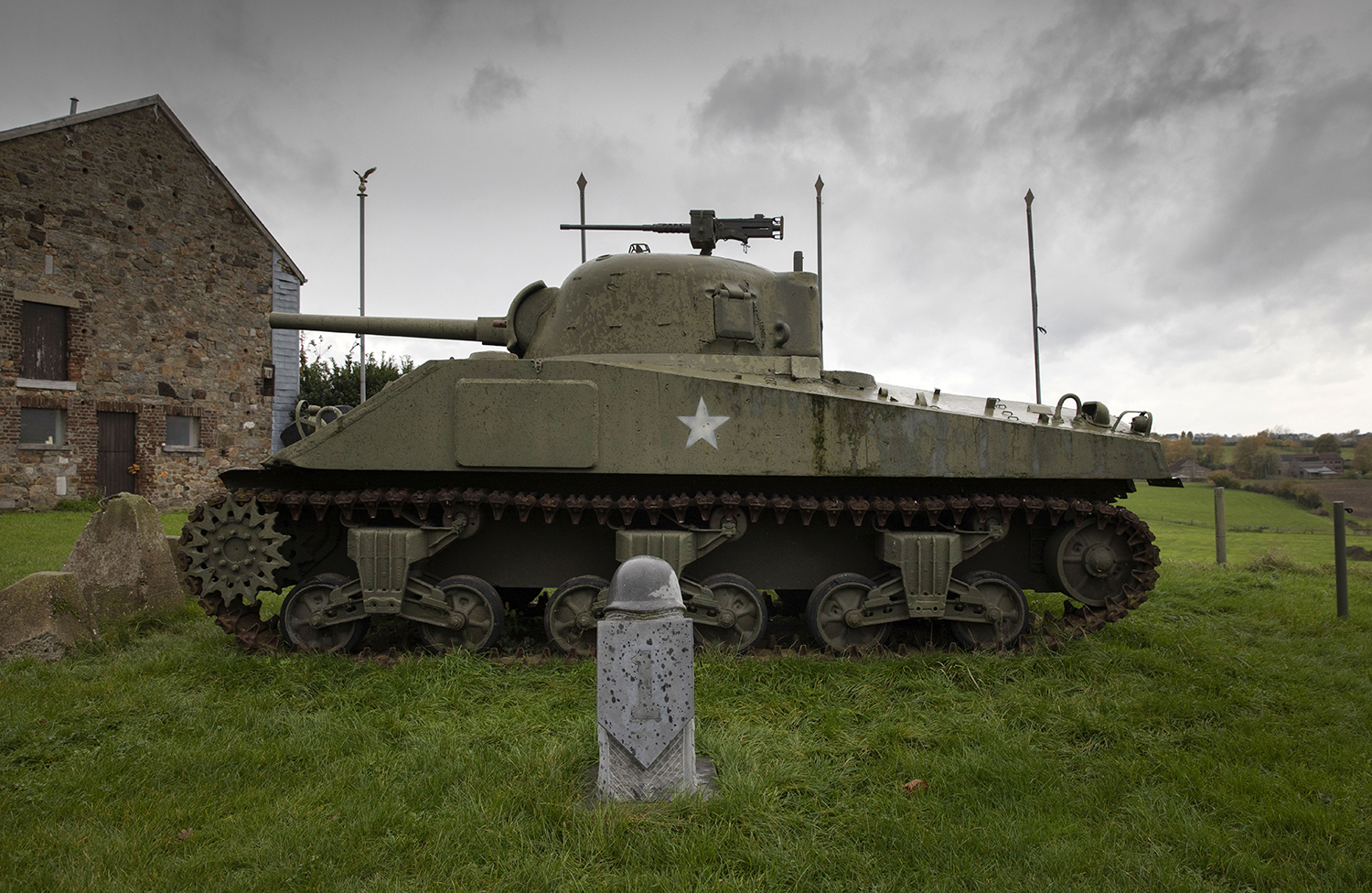 In this photo taken on Thursday, Nov. 7, 2019, A U.S. Army World War II Sherman tank sits on the hillside outside the Remember Museum 39-45 in Thimister-Clermont, Belgium. (Virginia Mayo/AP)
9 of 10 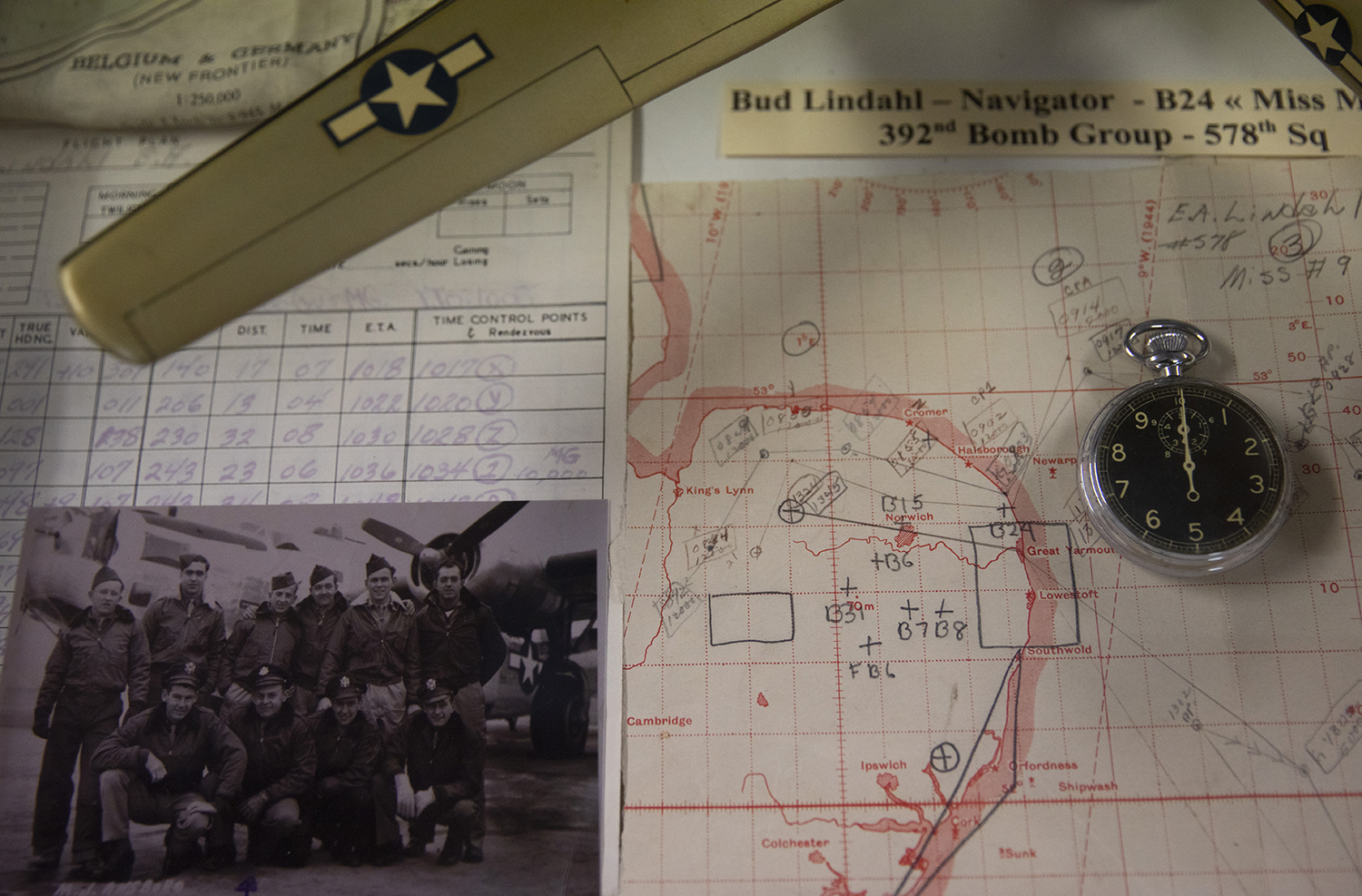 In this photo taken on Thursday, Nov. 7, 2019, a World War II model plane with navigation maps and a photograph are displayed at the Remember Museum 39-45 in Thimister-Clermont, Belgium. (Virginia Mayo/AP)
10 of 10 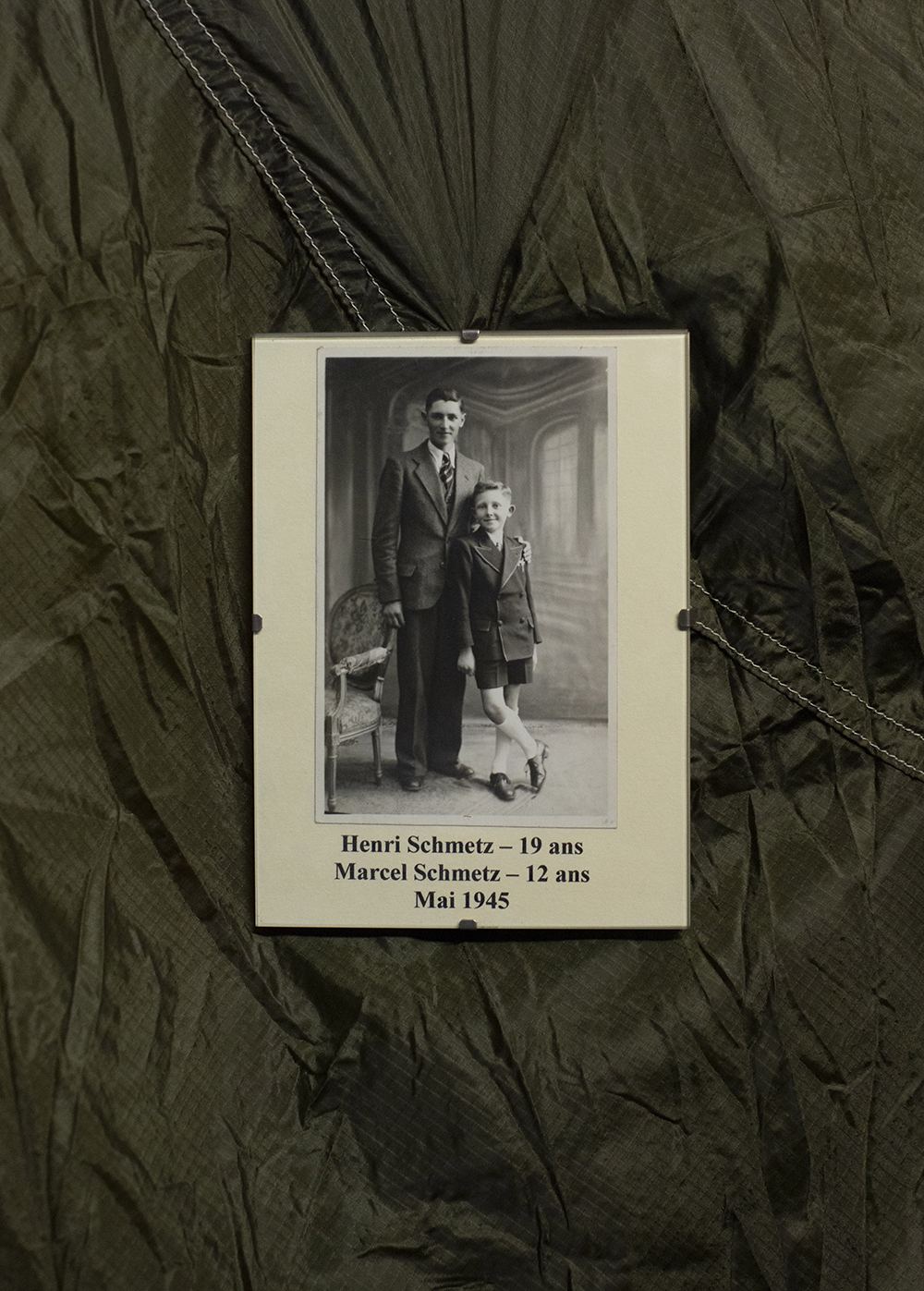 In this photo taken on Tuesday, Dec. 10, 2019, a photo of a young Marcel Schmetz is displayed on an old parachute at the Remember Museum 39-45 in Thimister-Clermont, Belgium. (Virginia Mayo/AP)

Yet, those people live on the scar tissue of war, where battlefields, memorials and cemeteries lie just a few miles away. That memory fades quickly the more one moves from the old front lines to European cities, where peace and prosperity has reigned for the best part of a century. The voices of the last witnesses of the war’s fighting, mostly in their 90s now, are also becoming frailer by the day.

And with the growing questioning of trans-Atlantic ties and trust, the challenge to keep those bonds across the ocean intact has increased.

It makes Marcel and Mathilde’s mission to connect all the more vital.

“Whoever is your president, whoever runs the show, the boys who were on the front lines, who still go out and fight for our freedoms, they need to know we appreciate them,” Mathilde said.

IT GIVES ME GOOSEBUMPS

Lt. Col. Jim Moretti of the 171st Air Refueling Wing knows it well, and whenever he is in Germany on a mission he always makes the pilgrimage to Marcel and Mathilde just across the border.

The first time he thought to spend perhaps half an hour in their small museum. Then he found out that the hardware sinks into insignificance compared to the software of the place — the stories which are linked to every item on show.

Mathilde connects a face in a photograph to a veteran she met years ago and still remembers the story that makes it all relevant to the families of the fallen.

It became even better when he was able to be part of such a story himself.

THE SMALLEST OF THINGS

Soft-spoken local policeman Serge Fafchamps had something troubling him for a while. Through his family, he obtained a fist-sized Bible that had been left behind by Pvt. Millard Weekley in a local hotel during the war, likely in the rush to reach the front line.

Like so many locals, Fafchamps is strongly aware of the sacrifices U.S. soldiers made during World War II and wanted to make a gesture, however small, to show that in the 21st century it was not forgotten.

“It was, I think, the smallest of things, it was a friendly act that I hoped would deliver some happiness to the family,” he said.

The Battle of the Bulge "is arguably the greatest battle in American military history,” according to the U.S. army historical center.

Even though he got close to finding the family, there was still a missing link, and he long thought he had reached a dead end. Then, by chance, he learned of Marcel and Mathilde. Soon, they were on the case.

“I began to make these searches with the help of American friends,” Mathilde said. “Then, finally, someone found the daughter,” Paula Ferrell.

But they still needed someone to deliver the Bible, in person. So in walked Lt. Col Moretti, who saw, as luck would have it, that Ferrell lived close to his airbase in Coraopolis, Pennsylvania.

“Of all the places in the U.S., this could not be true,” Moretti said.

And one Sunday on the airbase, Ferrell and her family were handed the Bible.

“It was an amazing idea. I am so thankful for that,” Ferrell said of Fafchamps’ kindness. Now the Bible sits on a night table next to her bed, the handwriting on the opening page a palpable memory of a father who was always taciturn when it came to war stories and memories.

“He never talked about it. He was a man of few words,” she said.

A new bond had been forged across the ocean. “If he was here, I’d give him a hug,” she said of Fafchamps.

The policeman himself said it gave him “a sense of mission accomplished.”

IT IS NOT TO FORGET THEM

The mission though, is getting tougher by the day.

Perhaps the best part of the museum is a “Red Ball Express” Army supply truck, on which countless veterans have written their names. Ever more though, the owners of the white-painted signatures are dying off. Just this week, Mathilde opened a letter informing her of yet another death.

Marcel, ever the optimist, is looking to a new generation of U.S. troops, soldiers like Moretti, to carry on the torch.

“When I look at the young soldiers who are on U.S. bases in Germany,” he said, “it always reminds me of the arrival of the Americans in 1944,” who had come to liberate him and his family.

With so many of our purchases and transactions made online and through phone apps, consumers end up with a lot of logins and online accounts - with a lot of personal information attached to them. Personal finance expert Jeanette Mack explains how to protect your finances from cyber criminals.
Close
Now Playing