The Defense Department’s efforts to study and eliminate extremism in the force have seen a one-day stand-down to address domestic extremism among service members, a working group to take on some short and long-term projects, and now, a test run of extremism questions on command climate surveys.

Starting this year, DoD is legally required to survey troops about whether they have experienced or witnessed extremism at work, spokeswoman Lisa Lawrence confirmed to Military Times on Tuesday. The questions are part of a “research block” being used as a pilot for possible future use on more surveys.

“Results from research block questions are not considered part of the formal [Defense Organizational Climate Survey] process nor shared with commanders or publically [sic] released,” she said. 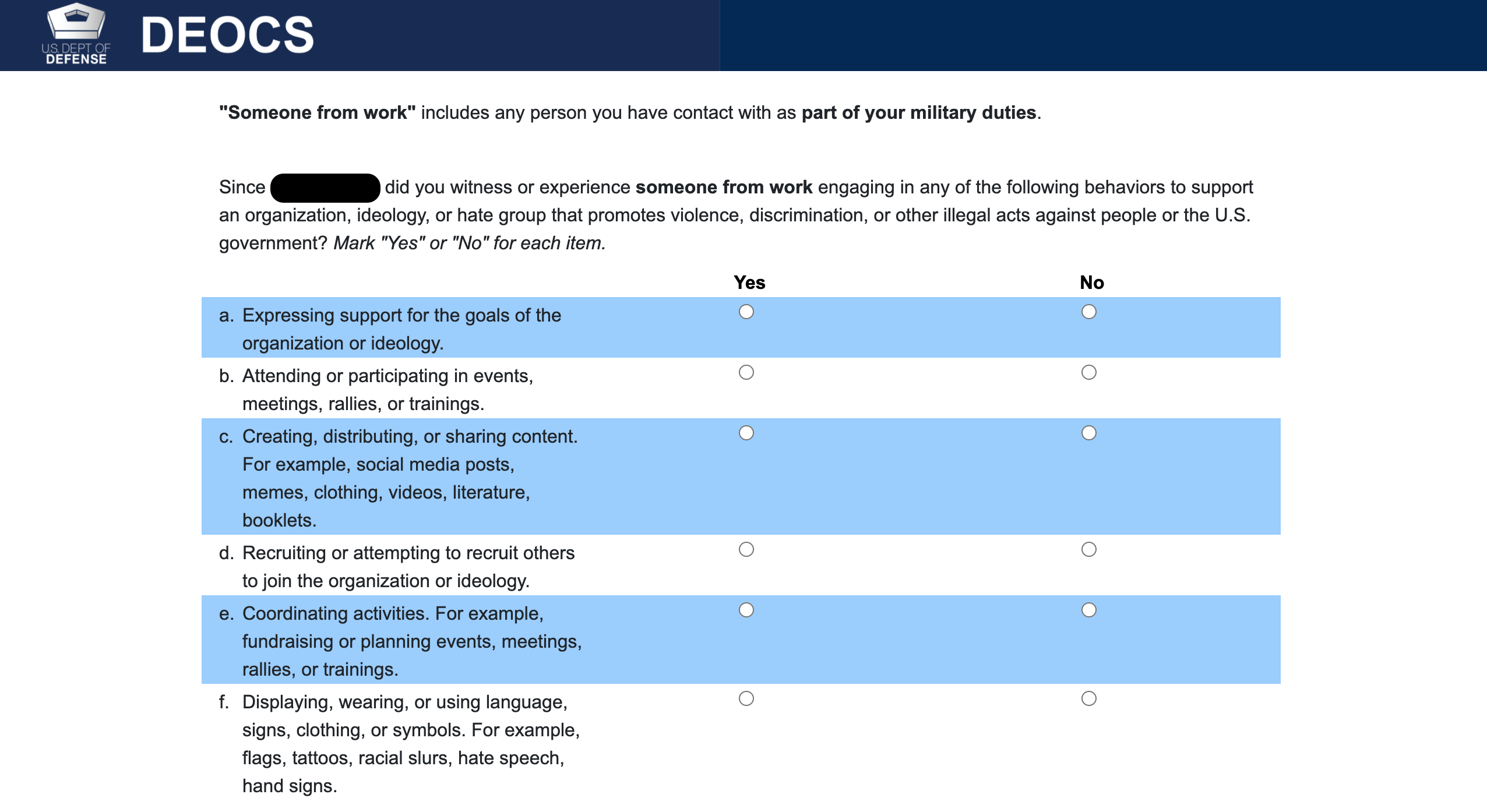 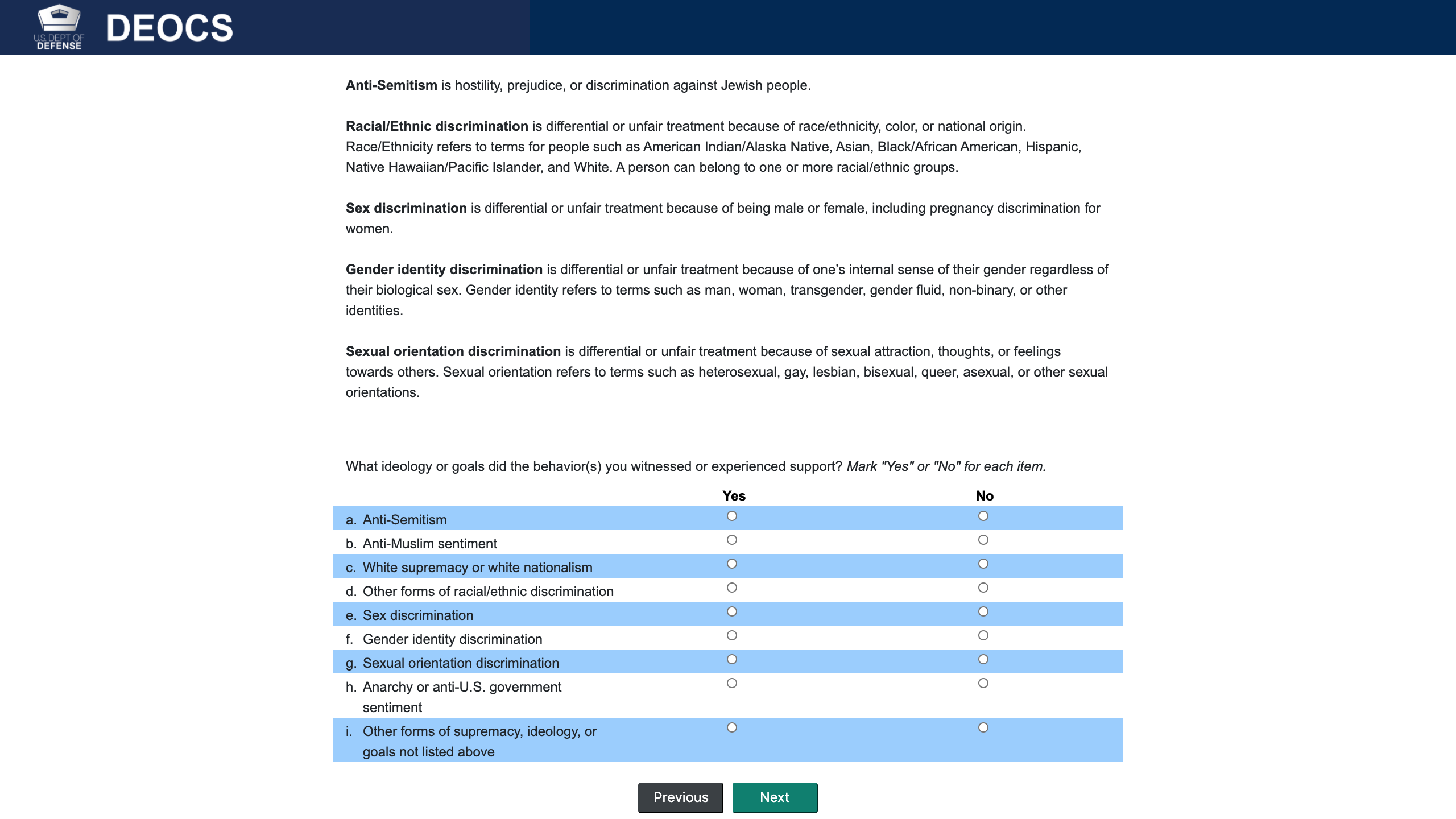 The section of the survey allows a service member to answer “yes” or “no” to whether they have witnessed or heard various types of extreme or discriminatory language or behavior, then note whether they considered them extreme, list the organizations or ideologies they might have specifically heard supported and then whether and/or who they reported the incident(s) to.

Following the end of the stand-down in April, Defense Secretary Lloyd Austin directed a working group to come up with a new policy definition for extremism, review transition procedures to prepare separating troops for possible recruitment to extremist groups post-service and to conduct a study to get a handle on the prevalence of extreme ideology among service members.

“One consistent thing that he did hear is that the force wants better guidance,” Pentagon spokesman John Kirby told reporters April 9, adding, “It’s not just about group membership ... it’s about the ideology and the conduct that that ideology inspires. Some of this radicalization occurs on an individual level.”

The Pentagon has so far not centrally tracked either prevalence of extremism or the number of cases handled at any level ― from local disciplinary action to military criminal investigations to FBI inquiry ― the way they do sexual assault and sexual harassment with their military workplace survey.

Adding the questions to the command climate survey not only gives an overall look, it can localize issues and be used in decisions about leadership.

Morale aboard the cruiser Shiloh plummeted during the command of Navy Capt. Adam Aycock, making the ship the butt of jokes on the waterfront in Yokosuka, Japan.

Previous independent polls by Military Times found that as many as a third of troops had witnessed white nationalism or racist language at work ― red flags for sympathy or involvement with extremist movements ― and that more than half of minority service members had witnessed that behavior.

Correction: This story has been updated to reflect that the extremism questions are part of a pilot program.

A sailor in Virginia is being credited for saving the life of a driver who crashed into the gate of the Norfolk Naval Station in Norfolk, Virginia.
Close
Now Playing

"You have to decide: what is the right thing to do?" | Dear Young American — Gary Beikirch

The future of security operations in Afghanistan