Most weeks, if the sports media pays attention to an NFL center or long snapper, said center or long-snapper might need to consider another career path. The spotlight rarely shines on such positions unless mistakes are made; no news, for the most part, is good news.

But during the hype for Super Bowl Sunday, there are enough spotlights to hit just about everybody. And Atlanta Falcons backup center Ben Garland, a 2010 graduate of the Air Force Academy, and New England Patriots long snapper Joe Cardona, a 2015 graduate of the Naval Academy, are no exceptions.

Both players remain in service, with Garland in the Colorado National Guard (he spent time with the Denver Broncos prior to joining the Falcons) and Cardona in the Navy Reserve. For those who may have missed the academy-grad news in the swell of unrelated coverage (Roger Goodell! Gaga! Puppies!), here's a brief five-part recap: 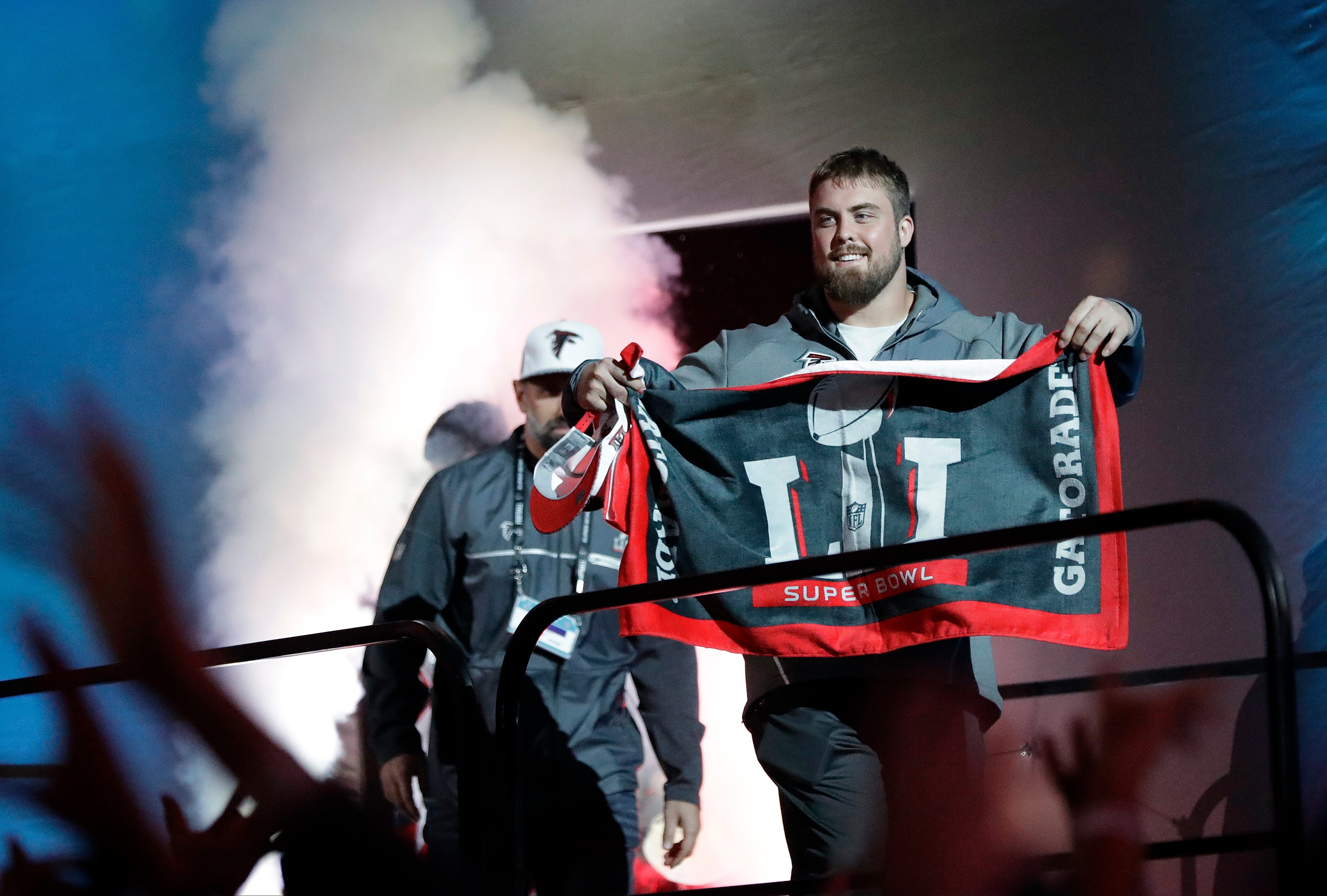 Ben Garland walks out with the team during "opening night" festivities prior to Super Bowl LI on Monday in Houston.
Photo Credit: David J. Phillip/AP
1. Just in case. Per NFL guru Peter King, Garland has been spending extra time in the film room and working on techniques with Alex Mack, the Falcons' starting center who is nursing a left leg injury. Mack is expected to play, but reportedly struggled at times during practice thanks to the injury suffered during Atlanta's NFC championship win over the Green Bay Packers.

Garland subbed for Mack briefly during that game, but had his biggest playoff moment while on the defensive line, falling on top of Seattle Seahawks quarterback Russell Wilson for a safety after a Seattle lineman had stepped on the signal-caller's foot and sent Wilson to the turf.

2. Leave request. Cardona told Yahoo Sports that he'd been scheduled for Reserve duty this weekend, but managed to reschedule. The long snapper's become somewhat of an expert on balancing his military career with his NFL ambitions, having played the 2015 season while an active-duty naval officer.

Another good indicator that it's Super Bowl week: A guest column by a reserve lineman's motheron a USA Today-hosted team blog. Key takeaways from Sydnee Garland's contribution to the Super Bowl media storm: She praises her son's never-say-die attitude, name-checks the "Bolt Brotherhood" at Air Force ... and calls her 6-foot-5, 308-pound boy "Benjie."

Cardona spoke to his hometown Fox-TV affiliateabout realizing his childhood dream of playing in a Super Bowl. The station also outlined some of the praise Cardona has received from Patriots head coach Bill Belichick, whose father coached and scouted for the Midshipmen for more than 30 years.

At a recent news conference, Belichick said his long snapper "represents everything that we want to stand for. He's a great person. His real job, defending our freedom, is at the very top of the list. We have great respect for the training and the work that he's done."

Get your fill of tactical coolness with guns, gear, bullets and moto content each week

Garland's part of the leadership of SoDE, a nonprofit attempting to eradicate human trafficking. When the NFL allowed players to represent charity causes on their cleats for a game this season, Cardona gave some love to the Travis Manion Foundation, a nonprofit named for a fallen Marine officer that helps veterans and surviving family members reach out to their communities, stressing youth character-development programs.

Garland's no slouch in the good-deed tweets department, either:

(From the Sponsor) Last year, more than 40 million used vehicles were sold in the US. Even though car-buying has become easier online, before you hit the Internet or the dealership, you still need to prep for your purchase.
Close
Now Playing

A Fort Bragg soldier disappears, and Russians with throwing-shovels — The Briefing, 7.24.20