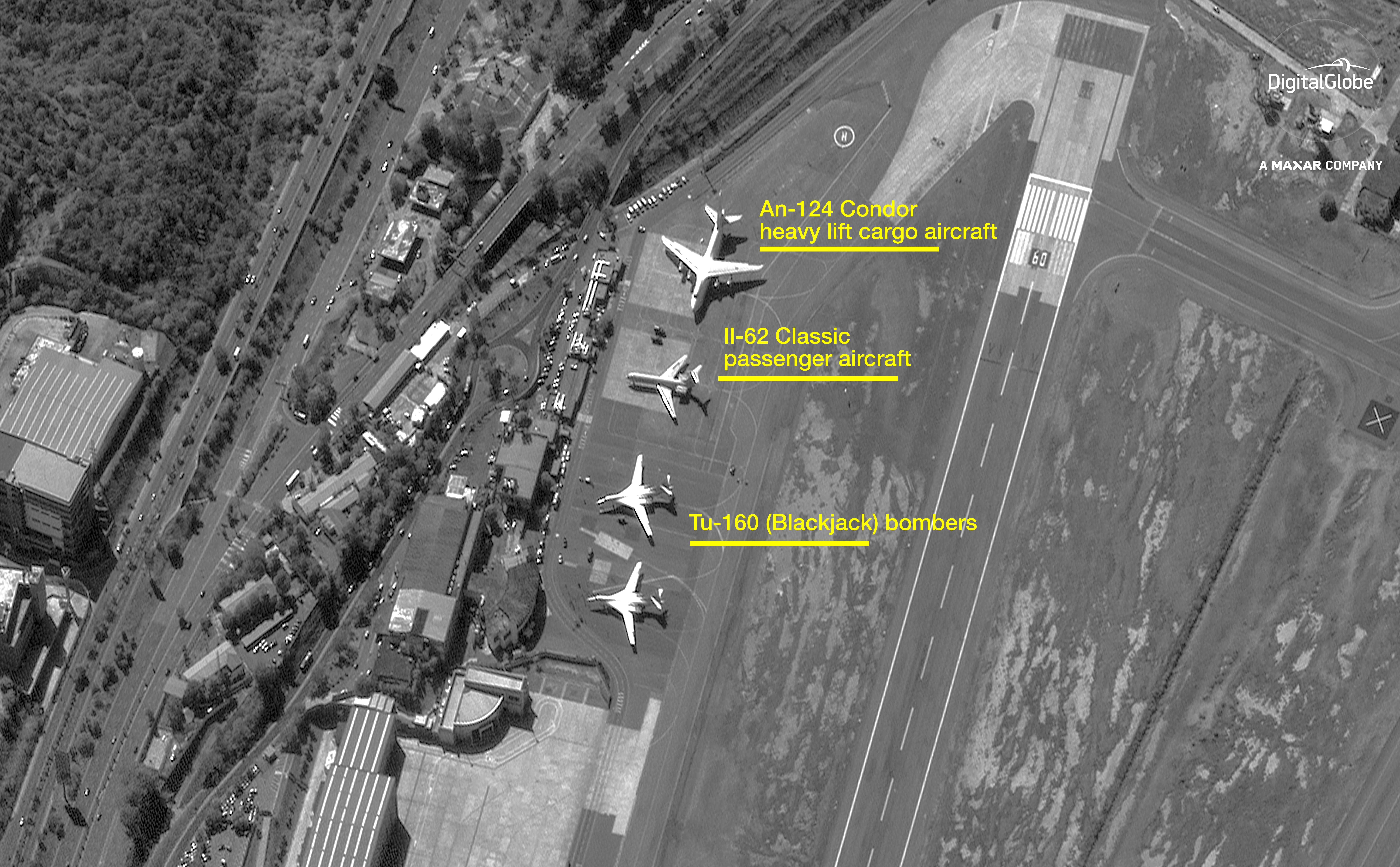 Satellite photos provided by DigitalGlobe show two Russian nuclear-capable Tu-160 Blackjack bombers along with a heavy-lift AN-124 cargo plane and an Il-62 passenger plane outside of Venezuela's capital on Dec. 10, 2018. (DigitalGlobe)
2 of 2 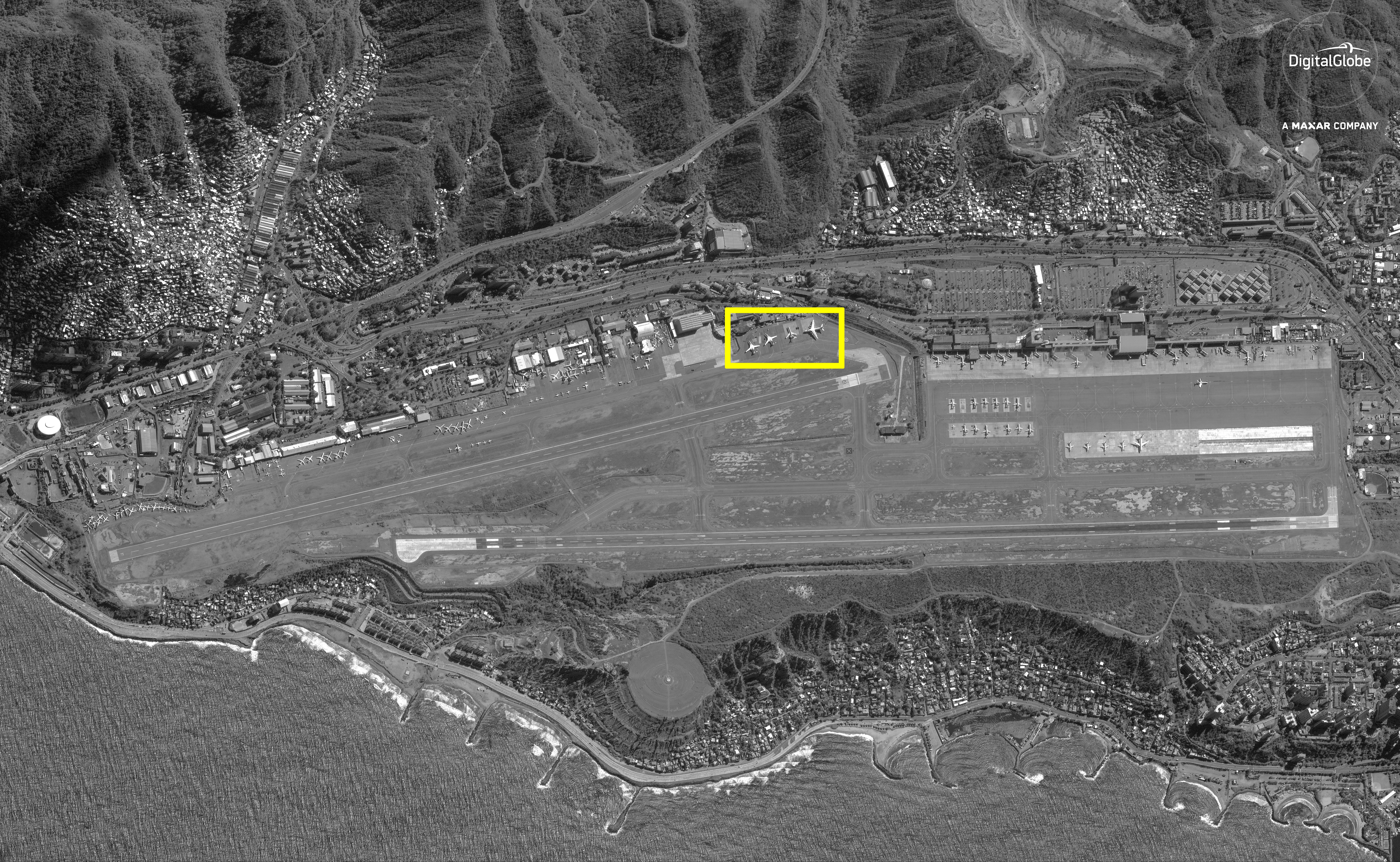 Two Russian nuclear-capable Tu-160 bombers along with a heavy-lift AN-124 cargo plane and an Il-62 passenger plane landed at Maiquetia airport outside of Caracas, Venezuela on Dec. 10, 2018. (DigitalGlobe)

Russia’s Defense Ministry said a pair Tu-160 bombers landed at Maiquetia airport outside Caracas on Monday following a 10,000-kilometer (6,200-mile) flight. It didn’t say if the bombers were carrying any weapons and didn’t say how long they will stay in Venezuela.

The ministry said the bombers were shadowed by Norwegian F-18 fighter jets during part of their flight. It added that a heavy-lift An-124 Ruslan cargo plane and an Il-62 passenger plane accompanied the bombers to Maiquetia.

The Tu-160 is capable of carrying conventional or nuclear-tipped cruise missiles with a range of 5,500 kilometers (3,410 miles). Such bombers took part in Russia's campaign in Syria, where they launched conventionally-armed Kh-101 cruise missiles for the first time in combat.

Code-named Blackjack by NATO, the massive warplane is capable of flying at a speed twice exceeding the speed of sound. Russia has upgraded its Tu-160 fleet with new weapons and electronics and plans to produce a modernized version of the bomber.

In this Aug. 16, 2005, file photo, a supersonic Tu-160 strategic bomber with Russian President Vladimir Putin aboard flies above an airfield near the northern city of Murmansk. The Russian military says two of its nuclear-capable strategic bombers have arrived in Venezuela, a deployment that comes amid soaring Russia-U.S. tensions. (Alexei Panov/Sputnik, Kremlin Pool Photo via AP)

The bombers' deployment follows Venezuelan President Nicolas Maduro's visit to Moscow last week in a bid to shore up political and economic assistance even as his country has been struggling to pay billions of dollars owed to Russia.

Russia is a major political ally of Venezuela, which has become increasingly isolated in the world under growing sanctions led by the U.S. and the European Union, which accuse Maduro of undermining democratic institutions to hold onto power, while overseeing an economic and political crisis that is worse than the Great Depression.

Russia sent its Tu-160 strategic bombers and a missile cruiser to visit Venezuela in 2008 amid tensions with the U.S. after Russia’s brief war with Georgia. A pair of Tu-160s also visited Venezuela in 2013.

Trump: Venezuelan socialist president could easily be toppled by military

But does he plan a U.S.-led military intervention?

Russia-U.S. relations are currently at post-Cold War lows over Ukraine, the war in Syria and allegations of Russian meddling in the 2016 U.S. election. Russia has bristled at U.S. and other NATO allies deploying their troops and weapons near its borders.

Asked about the Russian bombers, Pentagon spokesman Col. Rob Manning said he had no specific information about the deployment.

However, Manning cited the humanitarian assistance provided in Central and South American by a U.S. Navy hospital ship, the USNS Comfort, in the past eight weeks. Numerous Venezuelan migrants were among the people who received medical and dental treatment.

"Contrast this with Russia, whose approach to the man-made disaster in Venezuela is to send bomber aircraft instead of humanitarian assistance," Manning said.

Robert Burns in Washington contributed to this report.