Joining Forces officials this week will celebrate five years of work highlighting veterans and military families, but they’ll also be wondering what the next few months will mean for the future of the effort.

The White House initiative — founded and led by first lady Michelle Obama and Dr. Jill Biden — has been praised by many in the military community for successes in bridging the civilian-military divide, using media campaigns and corporate connections to tackle issues like veterans unemployment, military spouse credentialing and veterans homelessness.

At the launch ceremony in April 2011, Obama called on "every segment of American society, not to simply say thank you but to mobilize, take action and make a real commitment to supporting our military families."

The work's most tangible results have been in employment. Over the last five years, Joining Forces has received more than 1.25 million hiring commitments for veterans and military spouses from its corporate partners. It also has helped broker legislation enabling spouses to transfer certifications across all 50 states.

The work has included high-profile appearances by the first lady on national television shows and in nonmilitary media to talk about military service, typically with the message that the troops and family members who served are both inspirational and accessible to the American public.

In September, Obama joined former first lady Laura Bush to stump for the program's continuation, calling the focus on military families and veterans a "responsibility" that comes with the White House.

But its future remains unclear. President-elect Donald Trump has not publicly committed to continuing the program, and the non-legislative priorities of the incoming first family have not yet been made public.

On Monday, the White House will host an event for community leaders involved in the effort in recent years. As the program faces either a transition or an end, Military Times interviewed Joining Forces' past and current executive directors. Excerpts, editing for length and clarity: 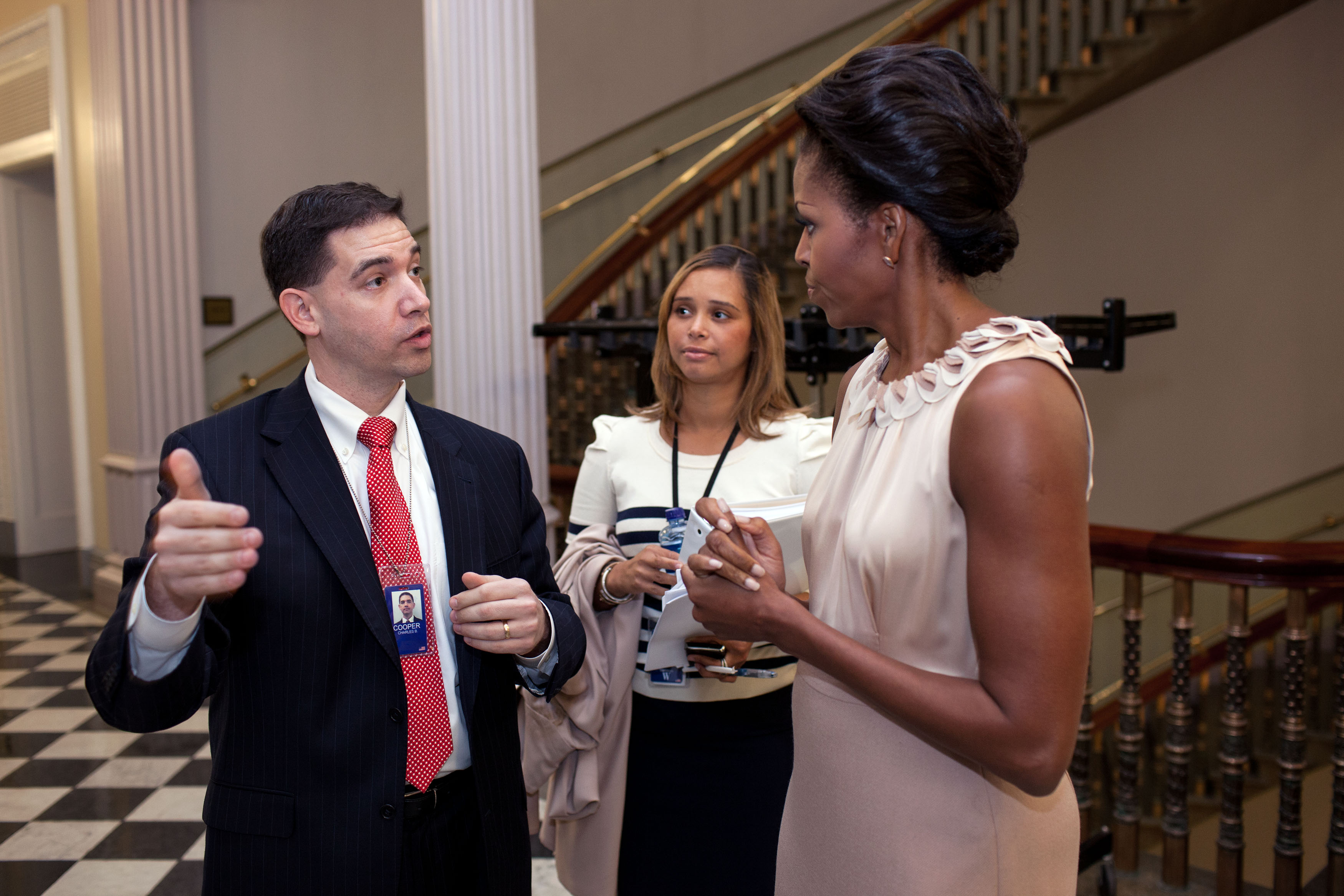 Rear Adm. Brad Cooper, executive director 2011-12. "I was the first director, so I was there at the infancy. And if we compare then to now, it really is an amazing story of achievement. I was there when we got the first two companies committing to hiring veterans and spouses. And they had committed to hiring 50. And you compare that to now, with 1.25 million people hired.

"That alone is an extraordinary achievement that illuminates the importance of advocacy and what great institutions can achieve.

"I can also remember when we had only two states that had military spouse legislation [on career transferability]. Mrs. Obama and Dr. Biden went to the governors meeting that year, and only ended up talking about military spouses. When you think about all the things they could have talked about, they chose just that one topic. They encouraged all the governors to pass legislation on that topic, and here we are today, with legislation in all 50 states…

"I don’t think we would have had that success without senior leadership in the country shining light on the issue in the way it has been done."

Navy Capt. Todd Veazie, executive director 2012-13. "Clearly, these two ladies have bent the curve. The unemployment statistics, the success in [recent years] is part of this call to action and a result of their work.

"This idea of how we treat invisible wounds going ahead is going to be a challenge. There is a story of post-traumatic growth. How do you emerge from this challenge and come out better? What we know is in cohorts, veterans will self identify and tell their stories. I have met guys from Vietnam with traumatic experiences, and just on a bus ride they’ll tell their life story. And they’ll tell me they never shared it before. So something can unlock that.

"We face a big challenge with our women veterans. They typically don’t self identify. It’s a really interesting problem, because they won’t go to a Legion Hall or VFW to talk to their cohorts. But when you get them together, it’s so powerful, and the growth happens.

"Continuing that kind of work has to happen. I hope the next administration prioritizes this, because it is so central to who we are as a nation."

First Lady Michelle Obama listens to Col. Rich Morales, director of Joining Forces, during a meeting with staff in the First Lady's East Wing Office of the White House in February 2014.

Army Col. Rich Morales, executive director 2013-14. "The connectedness that you feel between our various sectors is something that now gets done better on federal, state and local levels. It's not that people weren't trying to do great things. But what Joining Forces brought is an ability to integrate the effort, a unity to follow. And it's done in many different ways, whether it be [Obama's and Biden's] persona or the amplification of programs doing well.

"I think the partnership with some of the nation’s best brands and leaders has been tremendous. So I think this initiative has really moved things forward.

"One of the potential pitfalls would be the fatigue effect, the feeling that maybe we have done enough. I think it’s important to stay ahead of that. And a lot in the world of mental health, the non-visible wounds of war, still needs to be done. That’s going to take a lot more attention going forward."

First Lady Michelle Obama talks with Col. Steve Parker, director of Joining Forces, in the East Reception Room of the White House in May 2015.

Army Col. Steve Parker, executive director 2014-15. "I think there has clearly been a cultural change, just in a few short years. Each of us were charged with the same mission, but from a different perspective. Wellness, education, employment were still the foundational elements, but each of us were able to move to different aspects of that.

"I was able to give more attention to that wellness piece, this idea of normalizing the conversation of mental health. One in five Americans has been diagnosed with mental illness, so talking to veterans about mental health helps to put that in context and move things ahead. We’re still trying to put military service into context, putting veterans into context of larger social norms.

"A lot of the focus, even of the national groups, they realize they have to work at the local level to knit these communities of care together. I think communities are at the front of veterans’ resurgence. Ending veterans homelessness started with getting communities and mayor and cities, and we’ve seen success.

"When you recognize people who haven’t served are dealing with similar stresses and challenges, that’s a conversation that is now much more powerful to have."

Air Force Col. Nicole Malachowski, executive director 2015-16. "On a personal level, it was just really rewarding an extraordinary to be able to give back to my tribe. I'm a military brat, my husband retired recently, I'm a military mom and still active duty. To be able to work on something that speaks to my own experience but also is impacting hundreds of thousands of families around the world is extraordinary.

"The first lady and Dr. Biden have really demonstrated that the White House is there, in words and in action. They’re willing to use their voice to shine a light not just on the strength of our service members and military families, but some of the difficult issues they’re facing. They have been willing to put our their personal effort, the pulpit they’re been given to do something on behalf of military families.

"At the end of the day, it means something to service members to see someone go out there and say, ‘This is what I believe in, this is what I’m hearing from military families, and we need to do something about that.’

Army Col. William Johnson, current executive director. "The focus on veterans homelessness has been an expansion of Joining Forces as it has gone forward.

"You’ve heard the First Lady say this is an inherent responsibility that comes with the White House, and how different first families have taken on that role through history. With this team, they were able to build something that has expanded to bring in the whole community. The bigger message has been there has always been this tradition.

"The care of our military families comes with the White House. If your spouse is commander-in-chief, there is a responsibility to be there for those who have served.

"It’s rewarding to see this effort and where it started, and where we are at today, and to see not just numbers but really communities coming together. All of this continues. It’s not starting point conversations now. It’s ‘what can we do next?’ And that’s great."

Marine Corps spouse Rory Brosius, current deputy director. "One of the things I have seen is the groundswell of support for all of our issues is tremendous. We have built quite an amazing network of stakeholders and people who are committed to solving these problems.

"One of the nice things I feel is that when we leave here, none of those people are going to stop this work. They didn’t do it just because the first lady asked. They did it because it was smart and good for their country.

"We’re seeing these great employment commitments, the first lady has been part of a great mental health campaign, and I don’t think just because folks are walking out of here in January, those things will stop. I think those commitments are enduring and these folks have really bought into this, really care about this community. That was something that was really important to [Obama and Biden] to build, that it not just be words without action.

"They wanted concrete commitments, and we pushed for that. They were never afraid to ask. That gives us a level of comfort that this work will continue no matter who sits in this house." Follow @LeoShane

Leo Shane III covers Congress, Veterans Affairs and the White House for Military Times. He can be reached at lshane@militarytimes.com .

A judge ruled late Monday that the lawsuit doesn't belong in a California court.

The Navy is investigating the game of "warship chicken."

A Giving Tuesday donation to the military relief society of choice will be doubled today, helping troops and their families.