During his more than two decades in the Air Force, Col. Jack Fischer has gone from the classrooms of the Air Force Academy to the skies above Iraq and Afghanistan in an F-15 and to the cockpit of an F-22 as a test pilot.

But Fischer's next move will take him farther than he's ever been before: Outer space.

Fischer will become America's newest astronaut on April 20, when he blasts off in a Soyuz spacecraft from the Baikonur Cosmodrome in Kazakhstan, bound for the International Space Station. Fischer will spend at least four and a half months — maybe as long as 6 months — helping conduct some 300 experiments on everything from new technologies for exploration to creating lighter and stronger alloys to new medicines.

In interviews with reporters on Tuesday, Fischer — speaking from Russia's Star City near Moscow, where he was undergoing his final training — said he's "unbelievably excited" and that this journey will allow him to achieve the dream he's had since he was young.

"The first time I went for a jet ride or the first time I flew in the Raptor, you knew it was going to be awesome, but you didn't know it was going to be that awesome," he said. "I think [the blastoff] here in a couple of weeks is going to be an amazing experience that I can't even comprehend at this point. I can't wait to, once the final [rocket] stages kick off and we're actually floating in orbit, to look out the window and see the Earth in its entirety without borders, without boundaries."

Fischer said his grandfather used to work at the Johnson Space Center in Houston, Texas, and he got to visit the facility when he was six years old. He said he was awestruck at the massive Saturn V rocket laying on its side there.

"I just walked up to it and thought it was the coolest thing that I had ever seen," Fischer said. 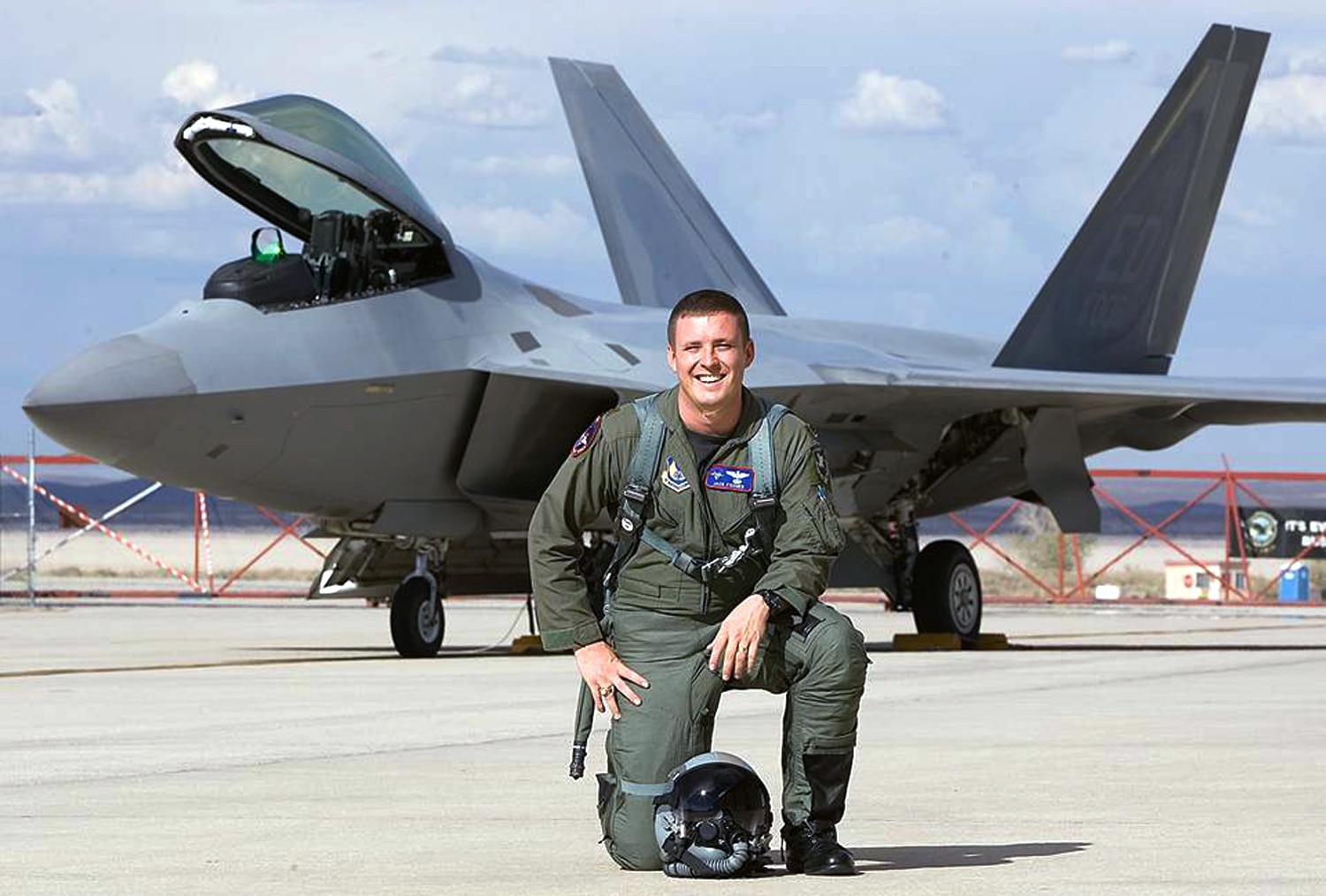 Then-Maj. Jack Fischer poses in front of an F-22A Raptor at Edwards Air Force Base, Calif. Fischer, a 1996 Air Force Academy graduate, was one of nine new astronauts selected for NASA's 2009 astronaut candidate class.
Photo Credit: Air Force
Fischer, of Louisville, Colorado, graduated from the academy in 1996 with a degree in astronautical engineering and got a master's degree in aeronautics and astronautics at MIT two years later. He learned to fly F-15E Strike Eagles at Seymour Johnson Air Force Base in North Carolina, flew two combat tours in Afghanistan and Iraq, and attended Test Pilot School at Edwards Air Force Base in California. He tested weapons at Eglin Air Force Base in Florida before returning to Edwards in 2006 to test the F-22 Raptor.

There is a chance Fischer will be able to make a spacewalk to work on the space station's exterior, which has him "super-excited."

"The only thing between you and space is a little suit," Fischer said when describing his enthusiasm for the possible spacewalk.

Fischer said that freed from gravity, the space station crew will be able to conduct experiments with the potential to help many people. For example, the station will work on a substance that can act as synthetic bone, which could potentially help trauma victims and the military.

"Without the constraints of gravity and convection and sedimentation, we're able to do some pretty cool things with alloys as well as crystals and proteins," Fischer said. "They can form perfectly, which allows us to look at new ways to study the human body, to look at immune system effects, to look for new drugs."

He described one device that he trained on in Japan that melted pellets of various substances with lasers and then rapidly cooled them to make new materials as "one of the coolest experiments that we have on the station."

Fischer said his test pilot training taught him to pay attention to even the smallest details, which will help him observe tiny, unexpected developments as the experiments progress.

Training for his first space mission includes lessons as varied as how to put on a space suit to how to fix a wall in space, Fischer said. And it can be tricky — especially since everything has to be done in Russian.

"If you're not good with languages, it's a bugger," Fischer said. "Russian is a tough language, so I've had my hands full. But the people here, the culture, the community, our office and our support system is second to none. Obviously the instructors are top notch. We work together well as a community, so it hasn't been that bad." 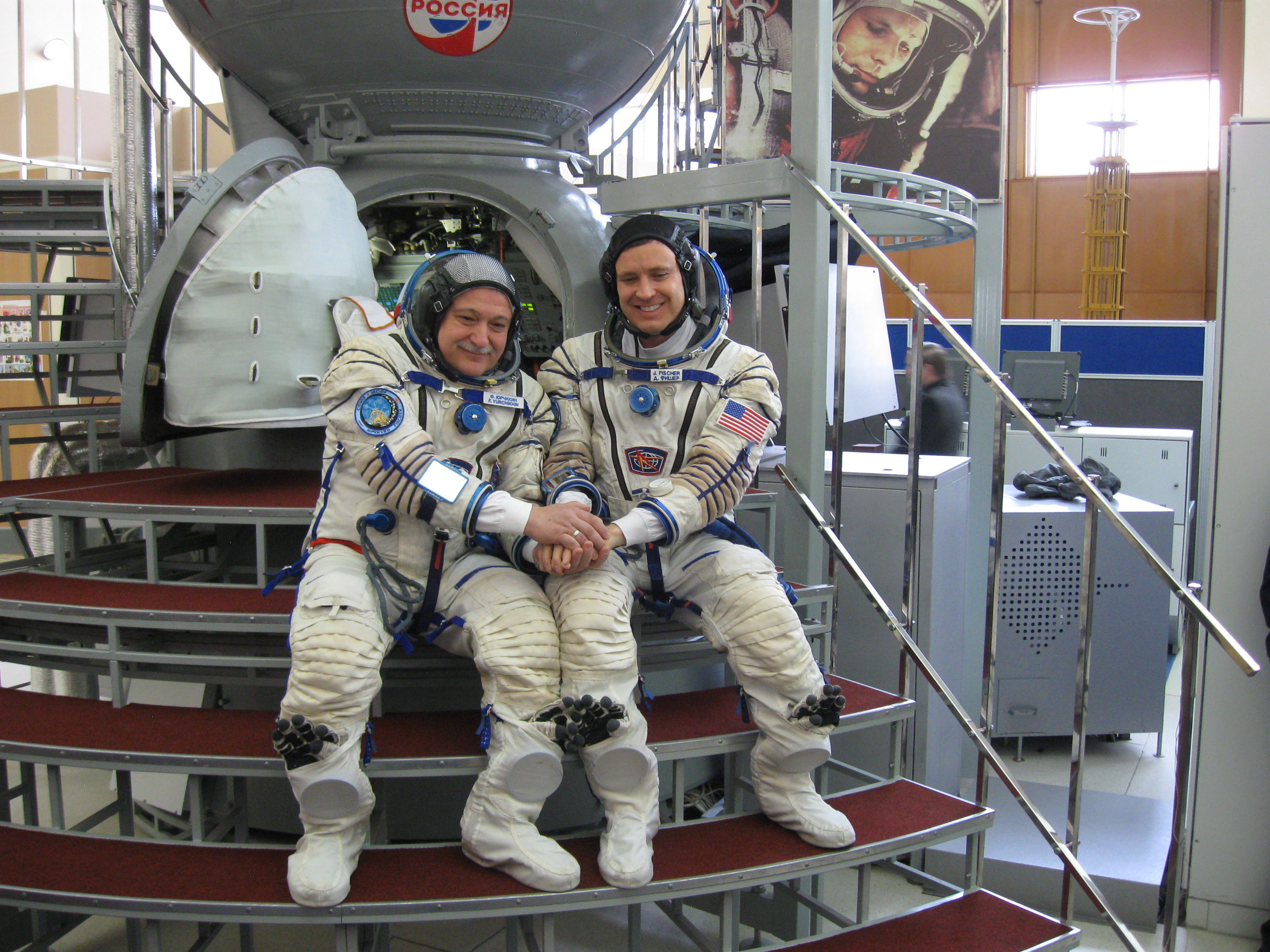 Expedition 51 crew members Fyodor Yurchikhin of the Russian Federal Space Agency, left, and U.S. Air Force Col. Jack Fischer of NASA, right, pose for pictures in front of a Soyuz spacecraft mockup March 31 during final qualification exams at the Gagarin Cosmonaut Training Center in Star City, Russia. The men will launch April 20 on the Soyuz MS-04 spacecraft from the Baikonur Cosmodrome in Kazakhstan for a four and a half month mission on the International Space Station.
Photo Credit: Rob Navias/NASA
Fischer has been working side-by-side with cosmonaut Fyodor Yurchikhin, who will fly with him in the Soyuz, for much of the last three years. The two now know each other so well, Fischer jokingly compared them to an "old married couple."

"I can look over and understand, from a grunt or a motion that he makes with his shoulders, what he's thinking and what he wants me to do," Fischer said. "I think we've gotten to be a pretty darn good team."

Fischer and Yurchikhin are scheduled to fly down to Baikonur on Wednesday morning, where they will be quarantined for about two weeks before the launch and conduct final pre-launch training. That two-week stretch will be "pretty laid back" compared to the intense training he's undergone so far, he said.

Having deployed for the Air Force several times in the past, Fischer is used to saying goodbye to his family for months on end. But due to the quarantine this time, saying goodbye behind glass will be unusual, he said — and a little more dramatic with the rocket launch.

"It's a little tougher for the family," Fischer said. "You make sure that you don't have anything left unsaid."

Looking to the future, Fischer said he'd like to see America build the technologies and infrastructure necessary to get humans to Mars. But, he said, if the administration decides "a pit stop to the Moon" is needed to perfect the technology, that could be a good step on the path towards Mars. And, in a few years, he would love to return to space in NASA's new Orion spacecraft.

When asked if he thought humans would ever make contact with extraterrestrials, Fischer said, "I sure hope they do! That's why we explore, is to find them. Someday, I sure hope we meet them."

Perhaps not surprisingly for an Air Force test pilot-turned-astronaut, Fischer's favorite space movie is "The Right Stuff," which tells the story of the beginnings of the space program and the original Mercury 7 astronauts.

Fischer said astronauts and cosmonauts on the space station relax by watching movies and having long conversations about their families or other subjects over dinner.

But perhaps their favorite pastime is taking advantage of the amazing view and taking as many photographs as they can, he said.

"It is such a unique perspective, that we do our very best to capture that perspective and share it with the world," Fischer said. "You have realize that spaceflight is a gift, and you have to make the most of it."