PARIS — French president Emmanuel Macron went all out Friday to seduce and impress President Donald Trump, and beyond him the whole American people, for France's annual Bastille Day, making this day of national pride also a celebration of American patriotism and friendship between the two countries.

Macron invited Trump as the guest of honor for France's national holiday to commemorate the 100th anniversary of the U.S. entry into World War I. The two men sat side by side with their wives, speaking animatedly as American and French warplanes roared above the Champs-Elysees, and then exchanged a warm embrace at the end of the ceremony. 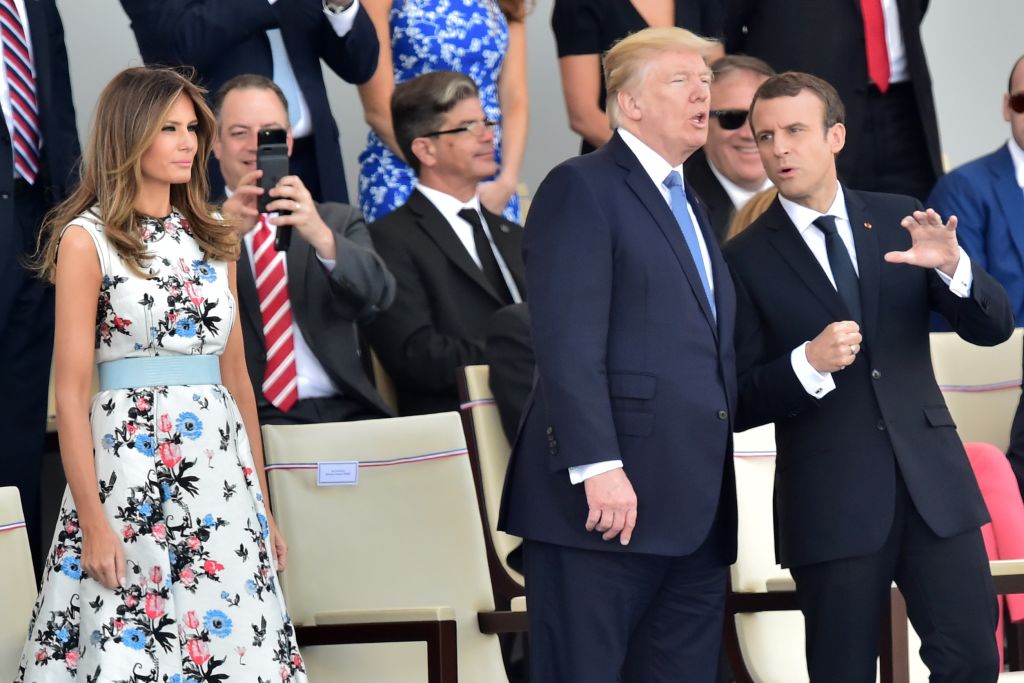 President Trump speaks with French President Emmanuel Macron as first lady Melania Trump watches the annual Bastille Day military parade on the Champs-Elysees avenue in Paris on July 14, 2017.
Photo Credit: Christophe Archambault/AFP via Getty Images
The parade coupled traditional displays of military might with a look at wars past and present — and a nod to the U.S. role in both.

Several highlights of the parade put the United States in the spotlight. Eight U.S. Air Force fighter jets were first invited to immediately follow the nine Alphajets of the famous "Patrouille de France" which opened the air parade. A few minutes later, a joint detachment of U.S. 145 Army and Navy troops and Marines soldiers opened the lengthy ground parade. Five of them wore period World War I uniforms.

At the end of the ceremony, the two presidential couples walked down from the stand at Place de la Concorde where they had been sitting and stood in front of giant French and American flags that were unfurled by soldiers. The two men shook hands and embraced, then clasped their hands together for a while before Trump was whisked away in his motorcade.

Trump didn't speak publicly during the ceremony, but he tweeted it was a "great honor" to represent the U.S. at the parade. He added the parade was "magnificent" and congratulated his French counterpart.

French Alphajets, followed by the U.S. Air Force Thunderbirds and two F-22 Raptors, conduct a flyover while displaying blue, white and red contrails during the military parade on Bastille Day.
Photo Credit: Chief Petty Officer Michael McNabb/Navy
Macron, in a speech near the end of the event, thanked the U.S. for intervening in World War I and said the fact that Trump was at his side "is the sign of a friendship across the ages."

"And that is why I wish to thank them, thank the United States for the choice it made 100 years ago," he said.

Macron also said that the U.S. and France are firm friends and "this is why nothing will ever separate us." 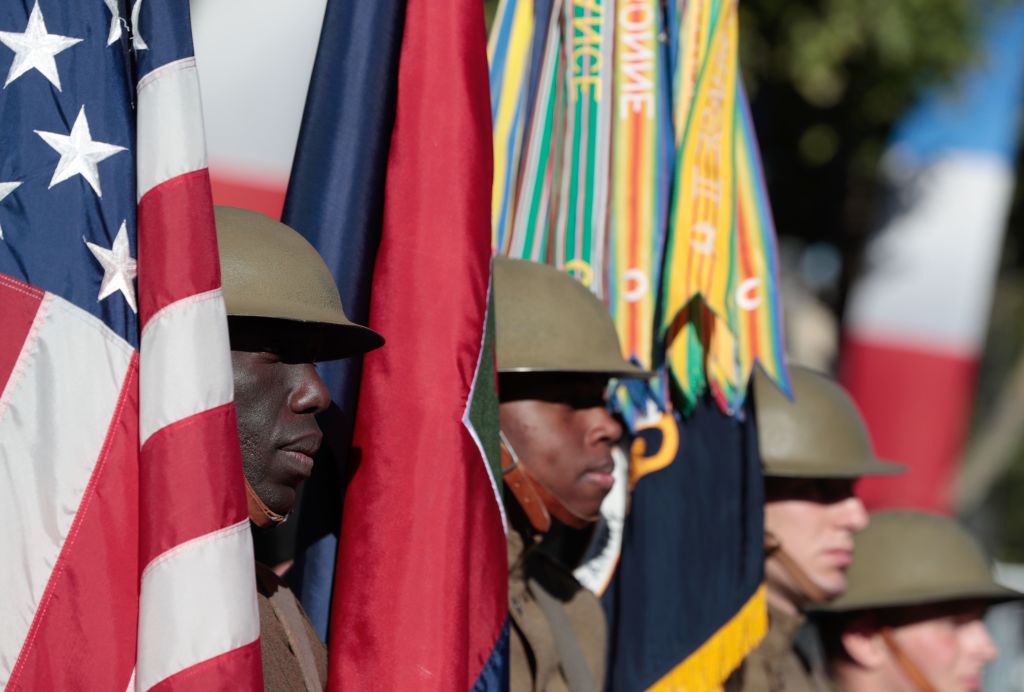 US soldiers hold flags as they prepare for the start of the annual Bastille Day military parade on the Champs-Elysees avenue in Paris on July 14, 2017.
Photo Credit: Joel Saget/AFP via Getty Images
Also in the parade were French soldiers taking part in the mission against the Islamic State group. France and the United States are among a coalition of nations fighting the extremist organization. The iconic Champs-Elysees avenue where the parade took place was the target of two recent extremist attacks. Two hours before the parade Friday, the famed boulevard was emptied, as was the Place de la Concorde with its golden-tipped obelisk.

After the parade, Trump returned immediately to the U.S., while Macron was heading to the southern city of Nice, where last year an extremist plowed a truck into the holiday crowd, killing dozens. ISIS claimed responsibility for that attack and others in France.

The Paris celebrations of Bastille Day are expected to end with a spectacular fireworks display fired from near the Eiffel Tower.

This week: lighter bullets for the Marine Corps, Iran names the new head of the Quds Force, a 500-plus-pound ISIS leader is caught, the Space Force unveils a camouflage uniform and drone ships for the Navy. These stories and more on The Briefing for the week of 1.24.2020.
Close
Now Playing